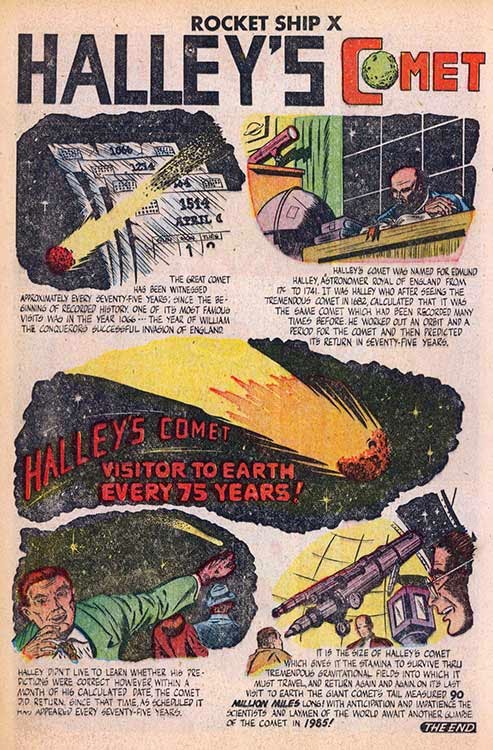 The ORIGINAL Miss LonelyHearts Columnist Can Help YOU on Valentine's Day! 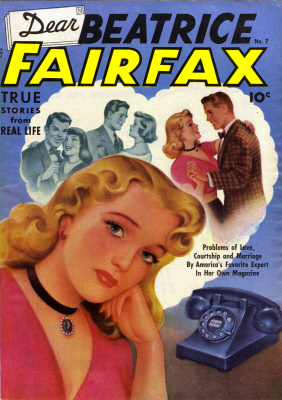 On that note, here are kool, retro, romantic, Valentine's Day kollectibles featuring Beatrice Fairfax!
"Who?"
Before Dear Abby, before Ann Landers, she was the original Miss Lonely Hearts, dispensing sage advice in her newspaper column long before the Internet.
Let her help you express your true feelings on the Most Important of Days--Valentines Day with greeting cards, teddy bears, mugs, and even "naughty" undies!

And, if she can't assist your love-life, perhaps something from one of our other sections at True Love Comics Tales™ can help you get your point across!

Let's return to frigid Pluto for another interplanetary adventure with... 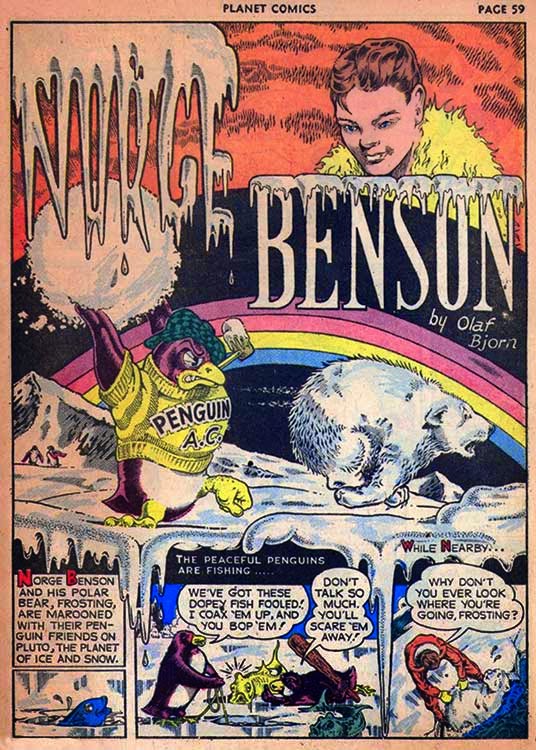 ..as we discover that, some penguins on Pluto speak perfect English, and others talk with Brooklyn accents...just like on Earth!
Think I'm joking?
Read on... 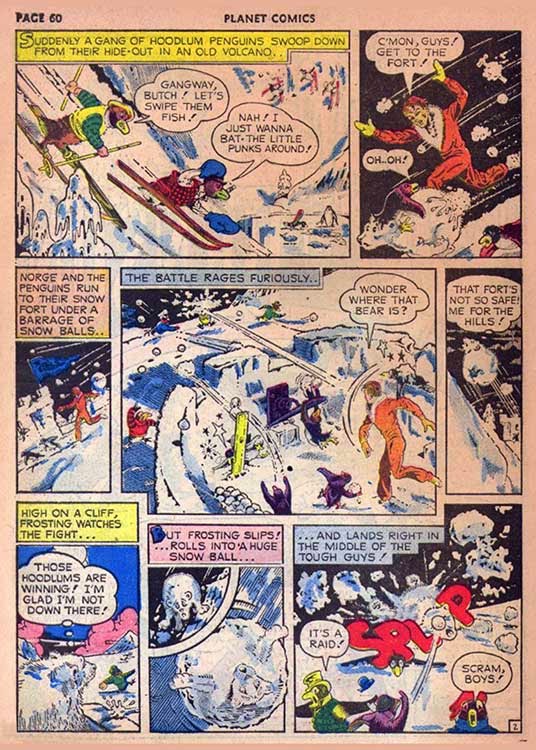 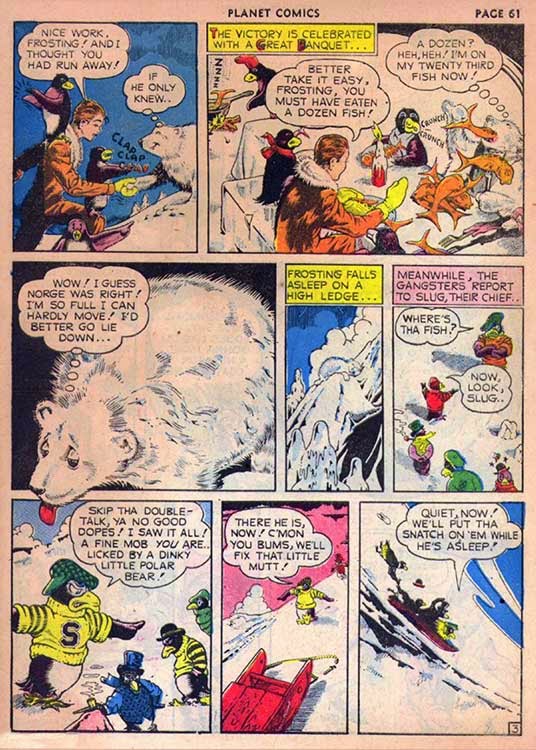 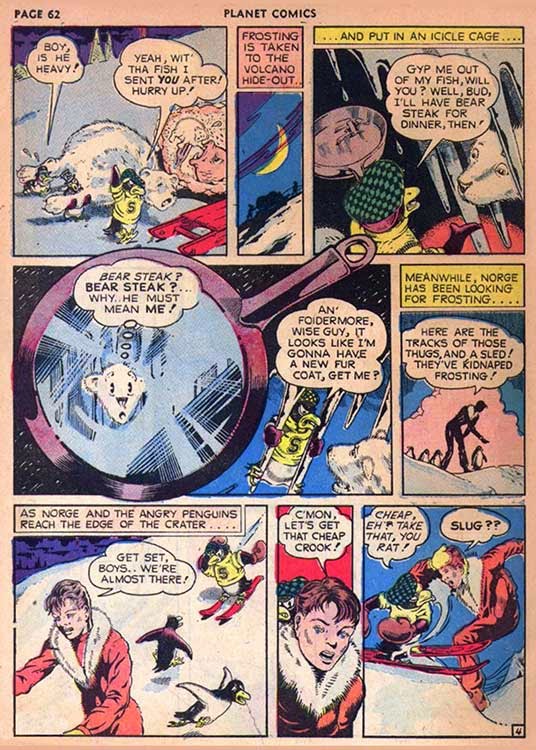 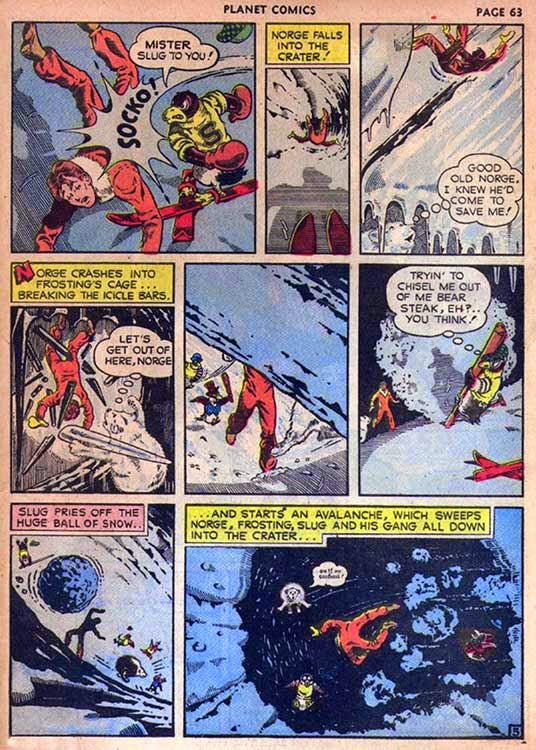 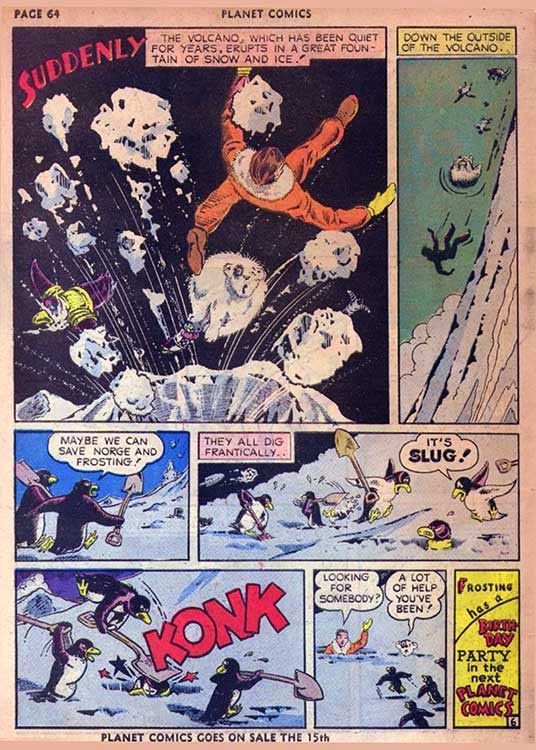 So, what'd youse tink?
Or for dose, I mean "those", who don't speak Brooklynese..."What did you think?"
I'll warn you now, future installments only get loonier!
Illustrated by Al Walker, who spent his entire comics career at Fiction House, this second appearance in Planet Comics #13 (1941) presents a somewhat less snarky (though no less humorous) version of the "Earthman on Pluto" concept shown in the earlier Cosmo Corrigan strip, mixing alien versions of both Arctic and Antarctic animals with total disregard to anything even remotely resembling exobiology!
But it is fun, and that's all that matters!
Posted by Britt Reid at 2/05/2015 09:21:00 AM No comments: 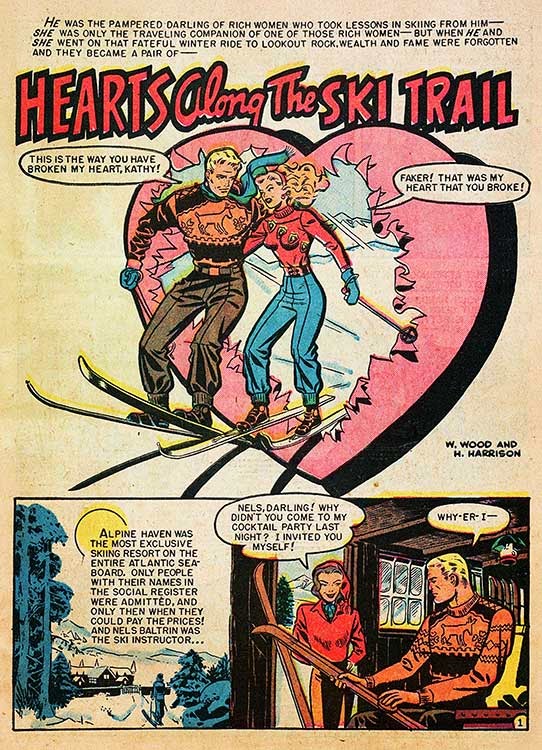 It's recommended you read the entire never-reprinted tale while sipping hot cocoa by a roaring fire!

Speaking of romance...
Valentine's Day is coming!
If you're looking for a gift for your pop culture-loving significant other...
Check out the

With winter finally hitting the US full-force... 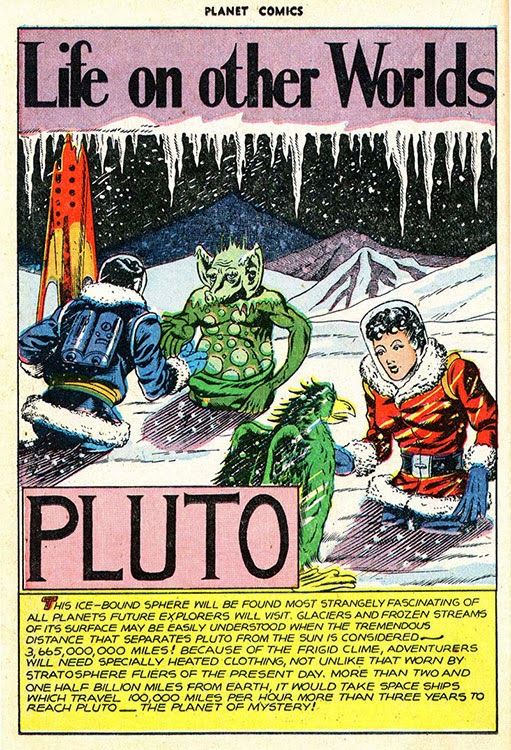 ... we invite you to re-visit the kool Polar Vortex posts on this blog
STRANGE TALES "When a Planet Dies"
UNUSUAL TALES "Night of Red Snow"
TALES TO ASTONISH "I Found the Abominable Snowman"
Part 1 / Conclusion
STRANGE WORLDS "I Captured the Abominable Snowman"
WILD! "Frozen North"
PLANET COMICS "Life on Other Worlds: Pluto"
COSMO CORRIGAN "Exiled to Pluto"
COSMO CORRIGAN "Martians, Mercurians and Money"
COSMO CORRIGAN "and the Space ShowGirls"
NORGE BENSON "Plummeting to Puto"
WEIRD THRILLERS "Graveyard in the Antarctic"
Plus, every RetroBlog featured a post with a winter/Arctic/extreme cold theme!
Here's the list (with links)... 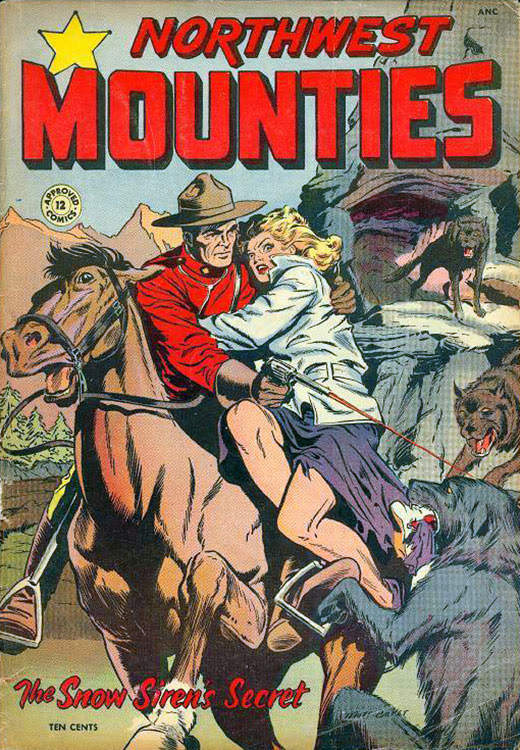 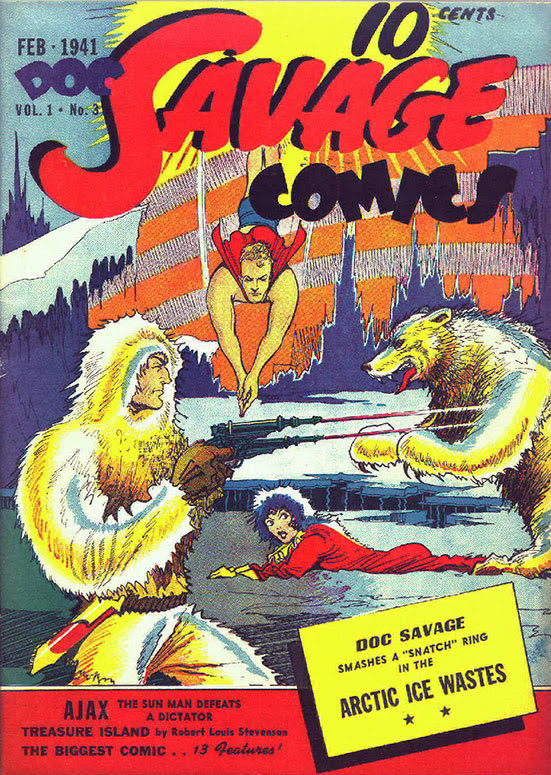 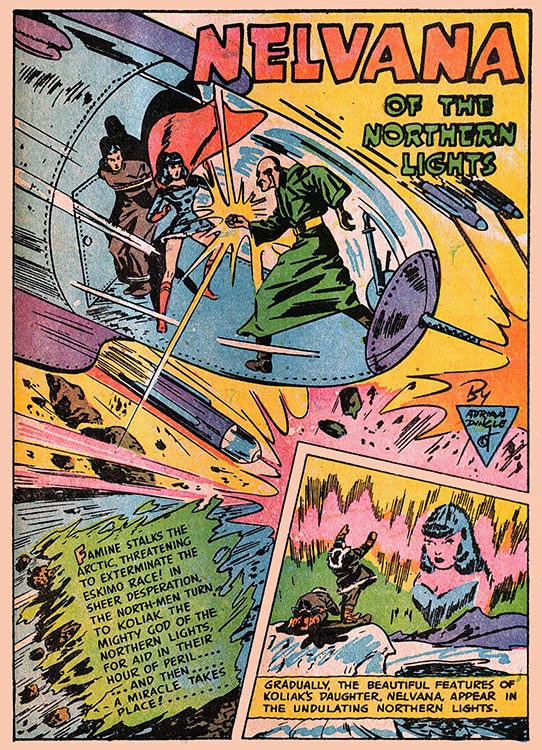 Heroines
NELVANA OF THE NORTHERN LIGHTS
"Attack from Etheria" 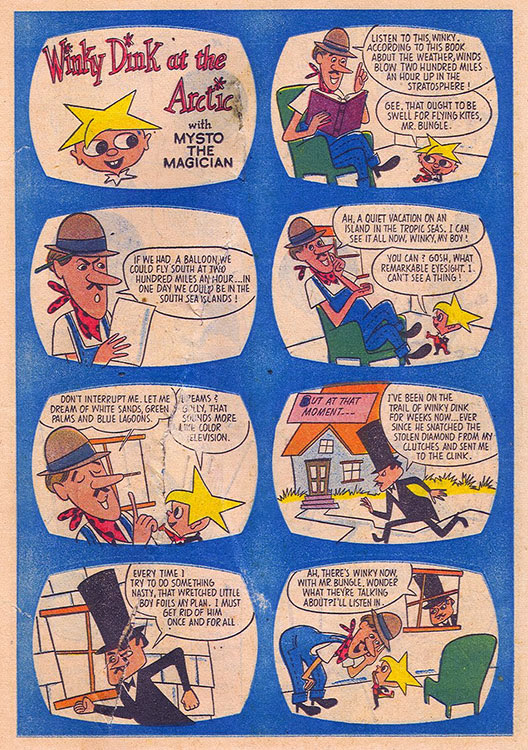 Secret Sanctum of Captain Video
WINKY DINK
"at the Arctic" 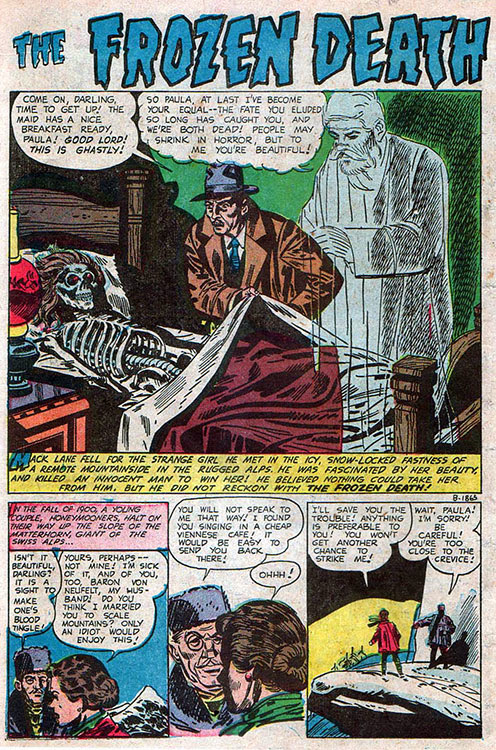 Seduction of the Innocent
Adventures into Darkness
"Frozen Death" 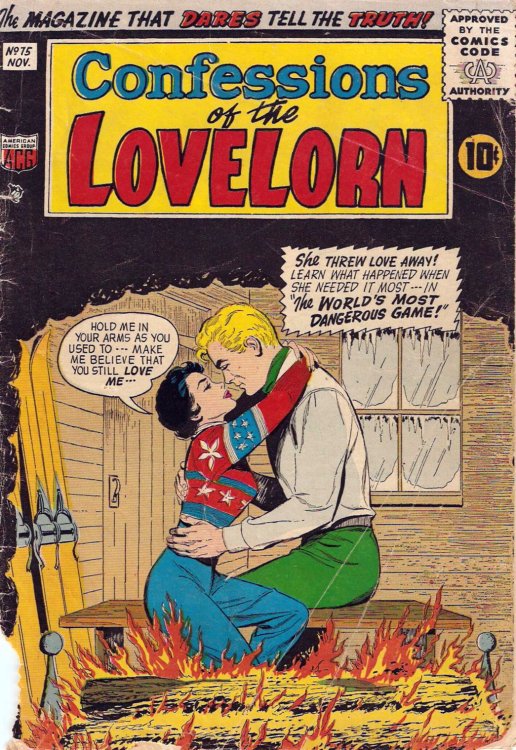 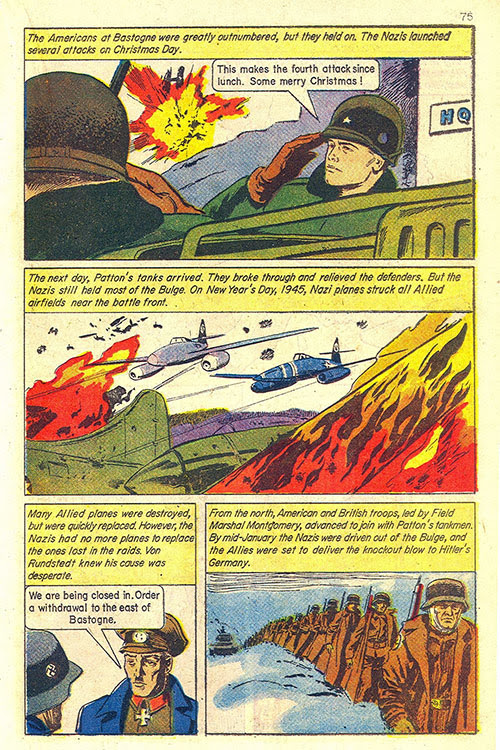 War: Past, Present & Future
CLASSICS ILLUSTRATED
"Battle of the Bulge" 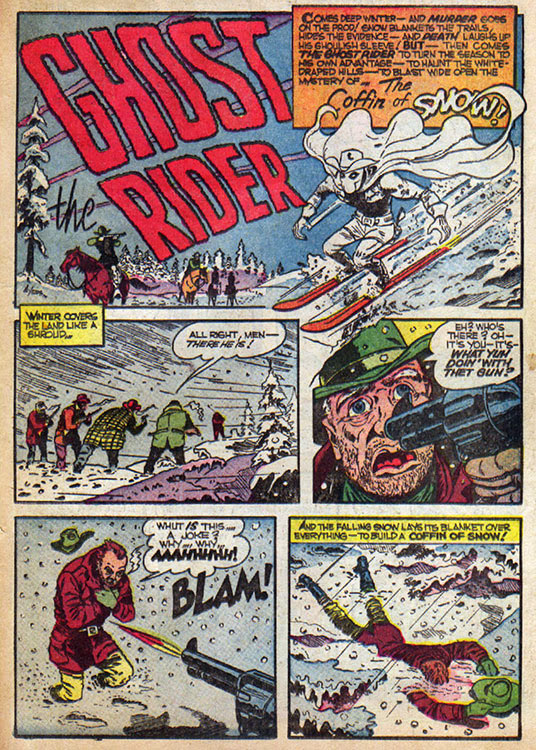 Western Comics Adventures
Original Ghost Rider
"Coffin of Snow"
Read them in front of a roaring fire with a mug of hot chocolate!
Posted by Britt Reid at 2/03/2015 09:16:00 AM No comments:

Since many of you are taking a "snow day" from school... 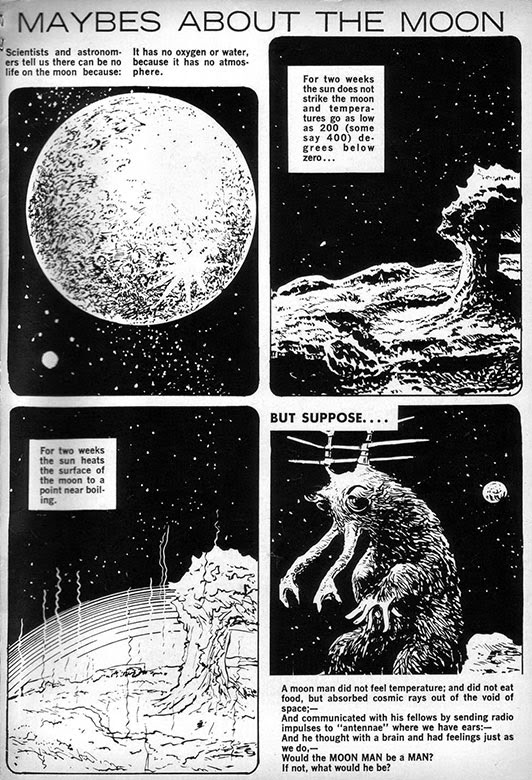 ...we feel you should still have a little (somewhat) educational info input when you come in from making snow forts and having snowball fights!
This never-reprinted short from Dell's Four Color Comics #1253 (aka Space Man #1) appeared in 1962, just as our Mercury space program was getting under way, so it's a lot of speculation.
Illustrated by Jack Sparling, but the writer is unknown.
BTW, even though it appeared in Four Color Comics, it's in black and white because it appeared on the inside back cover.
The inside covers were printed with only one color, black instead of the four colors CYAN, YELLOW, MAGENTA, and BLACK (CYMK), that make up all the colors in standard comic printing, as a cost-saving measure!
Posted by Britt Reid at 2/02/2015 02:04:00 PM No comments:

THIS is a SUPER Bowl! 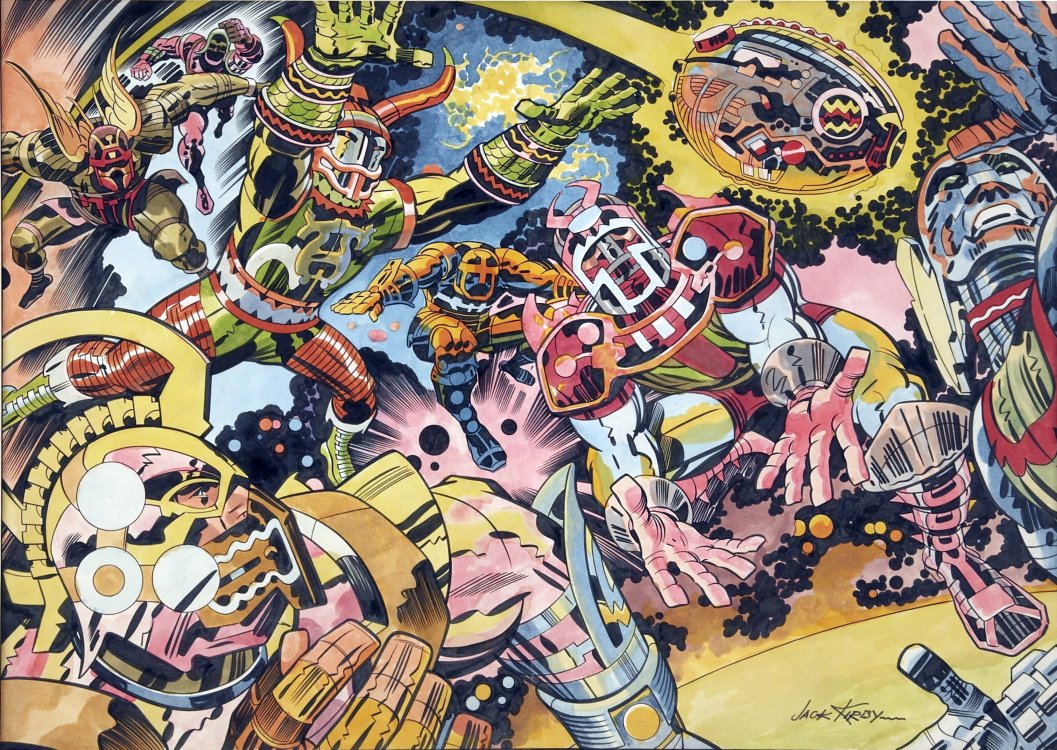 Today, we PARTY, with our own Super-HERO Bowl!
A marathon of comic book-based DVDs and BluRays from around the world.
(Thank the tech gods for multi-region players!)
See you tomorrow with more exciting tales!
Posted by Britt Reid at 2/01/2015 02:54:00 PM No comments: