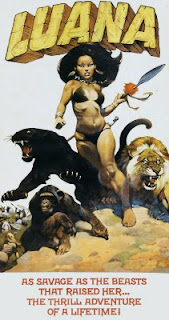 In our ongoing search for pop culture coolness, Atomic Kommie Comics™ has come across posters for two of the funkiest flix of the 70s-80s for our line of kool kollectibles including t-shirts, mugs, mousepads, and other tchochkies...
Luana (aka Luana - la Figlia della Foresta Vergine [Italy], Luana - Der Fluch des weißen Goldes [West Germany], Luana, the Girl Tarzan [USA]) was an Italian jungle flick featuring the only Eurasian jungle princess I've ever seen, a little-known actress named Mei Chen who looks really good in a fur bikini! Produced in 1968, but not released to the US until the mid-70s, it's best known for two American posters featuring art by none other than fantasy art legend Frank Frazetta! (There was also a novelization by Alan Dean Foster [who did a helluva lot of them in the 70s] with the Frazetta art on the cover! And the key art was used as a cover for Vampirella #31, which featured a comic adaptation of the movie!)
Needless to say, we've found BOTH of the posters (along with a non-Frazetta European one) and are offering them at our Menacing Maidens section of Seduction of the Innocent™.
PLUS: we've added the Indiana Jones-style poster for the 80s Just Jackln movie version of John Wilie's Sweet Gwendoline strip called Perils of Gwendoline in the Land of the Yik Yak, featuring video vixen Tawny Kitaen. The film is perhaps the classiest R-rated sexploitation film ever done, with a real sense of visual style, and actors who can actually act, despite truly awful dialogue! (The director also did the 80s versions of Emmanuelle and The Story of O.)
Mix in poster for both Cleopatra Jones blaxploitation flix, SuperChick, and the pre-Charlies' Angels team Ebony, Ivory & Jade, and you'll see why Menacing Maidens is a must-see site for the SERIOUS schlock fan!
Posted by Britt Reid at 8/26/2008 09:01:00 AM No comments: 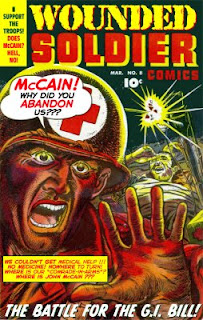 Sometimes, life imitates art.
Sometimes, art fits life.
In archiving some graphic files, I came across one that I felt could be modified to express my dismay at Republican Senator John McCain's failure to back the GI Bill to provide much-needed help to veterans.
Imagine, a fellow veteran unwilling to help his fellows, his comrades, his buddies!
Thus, the image you see at left of a helpless medic pleading for help as his last bottle of precious plasma is blasted by an unseen enemy...
You can find it at McCain the Betrayer on shirts, stickers, buttons, mugs, and other goodies.
Plus: I'll provide a volume discount if you need one. If it means getting the message out, I'd rather just break even.
We can't allow him to become the Commander-in-Chief!
Posted by Britt Reid at 8/25/2008 02:18:00 PM No comments: