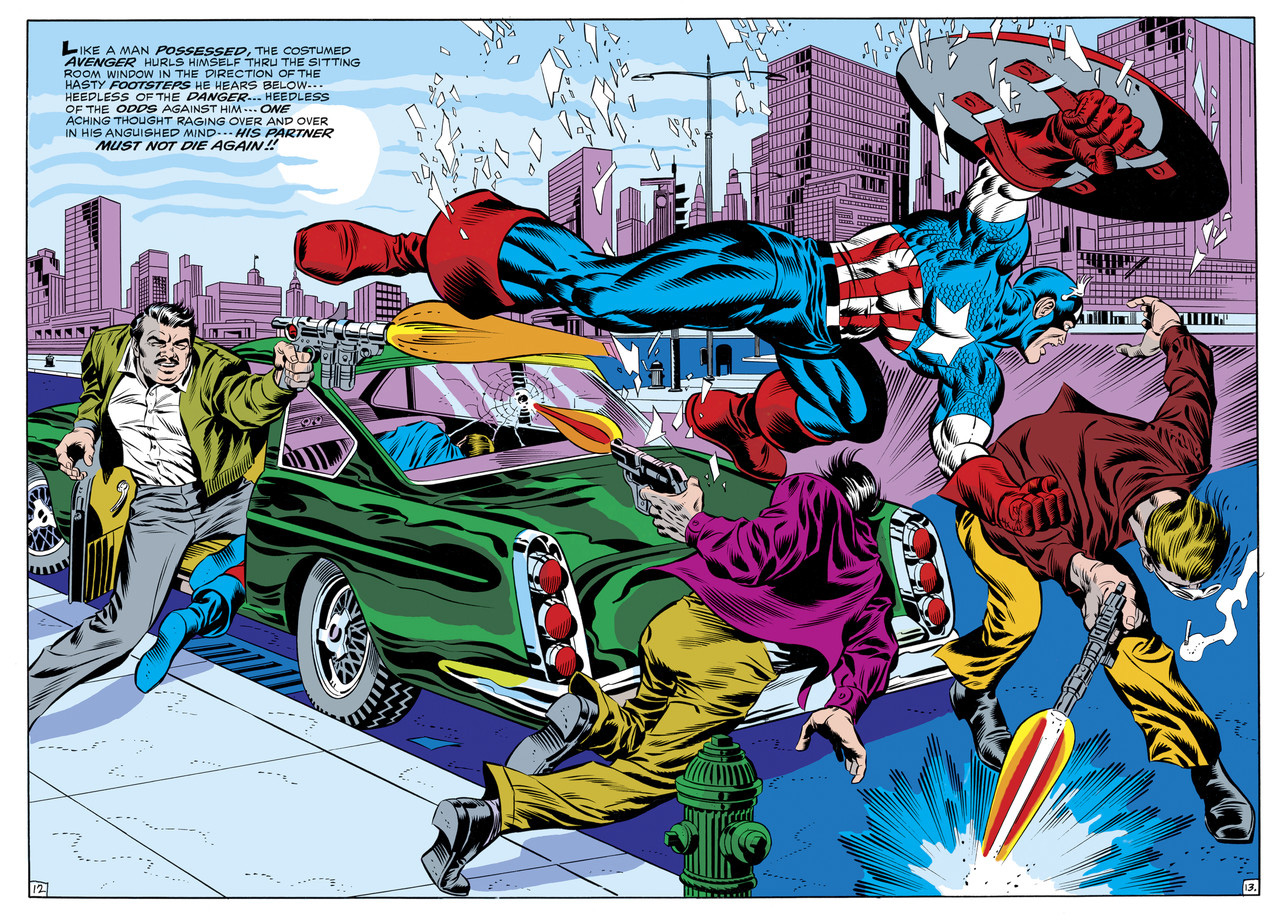 (all the rest).
Why?
Because we're going to see Captain America: the Winter Soldier, and I'm in a "Captain America" sorta mood!
Besides, I don't plug my collectibles everyday! Just most days...  ;-)
Click on any of the panels to enlarge
Enjoy! 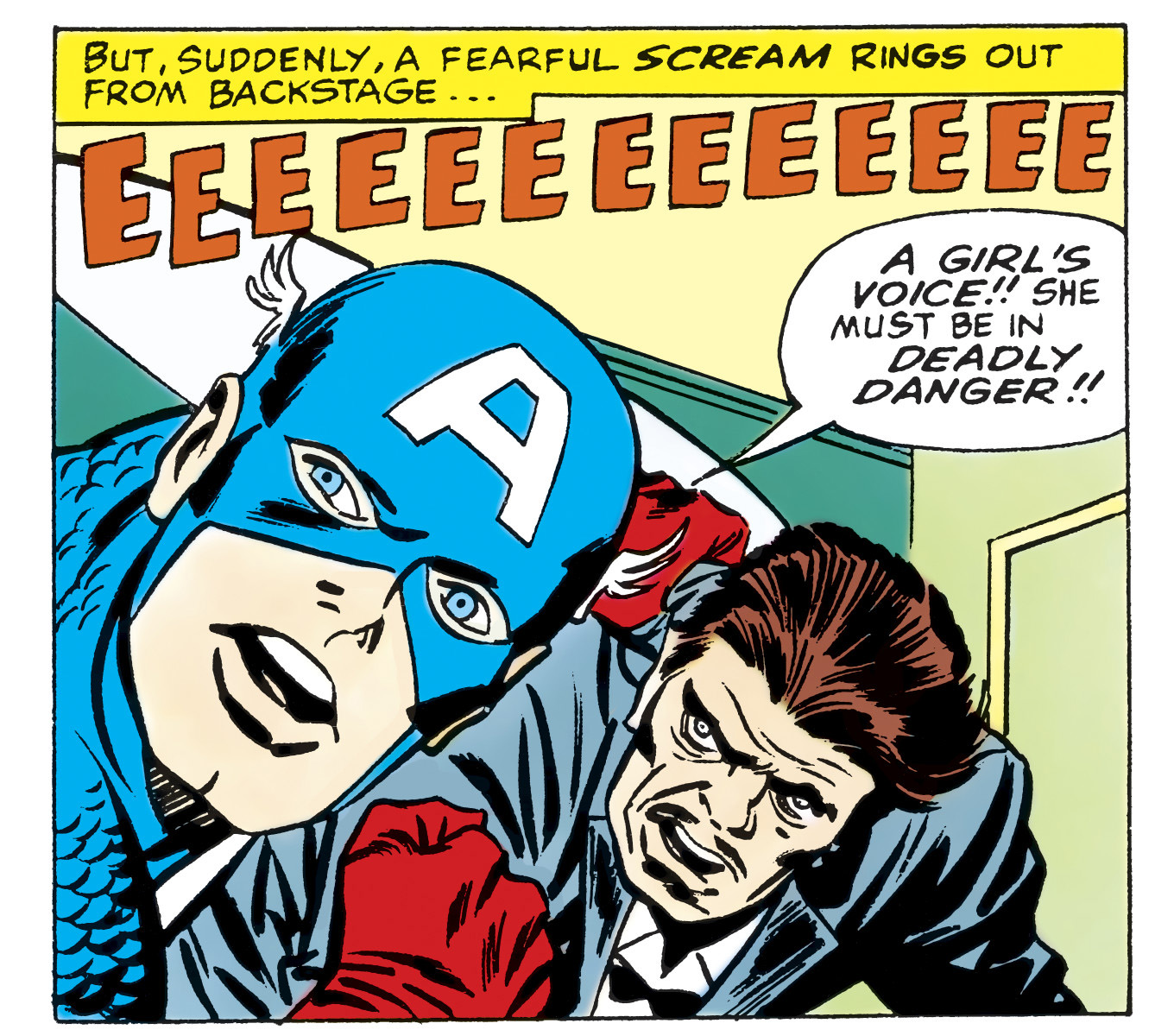 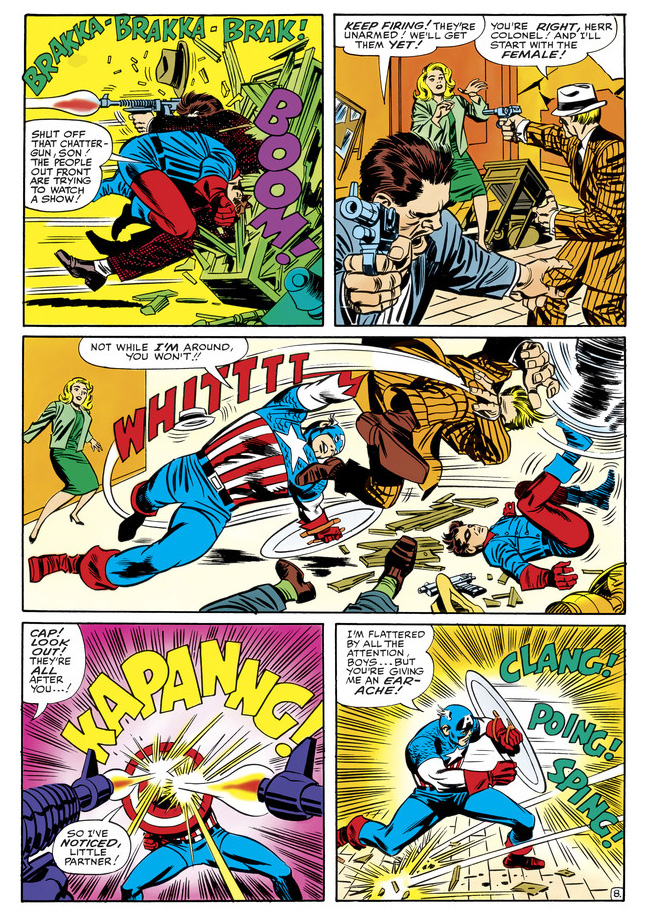 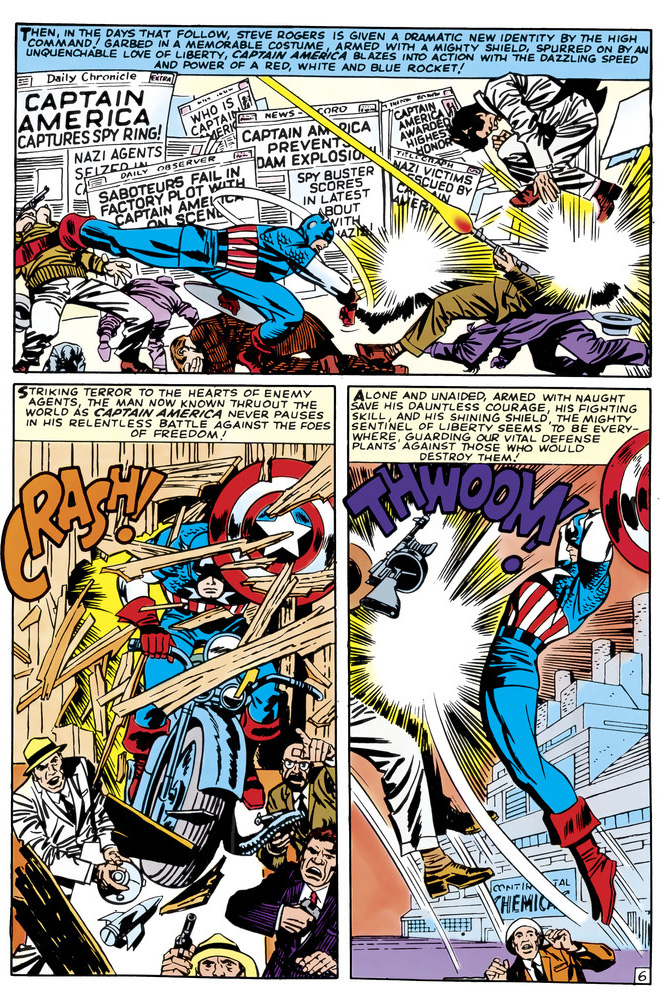 So what are you doing this weekend? 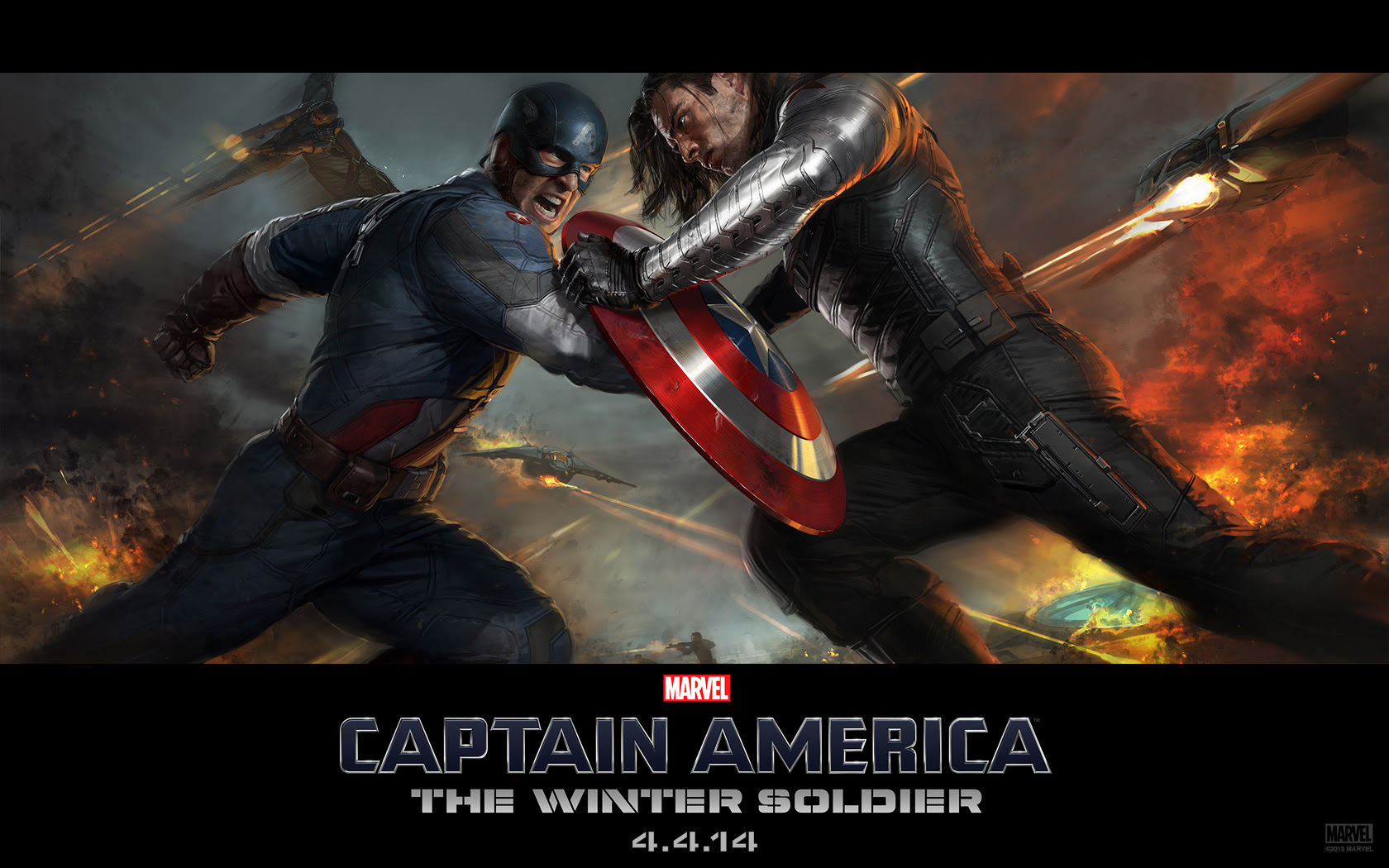 For us, it's this, and the Game of Thrones season premiere... 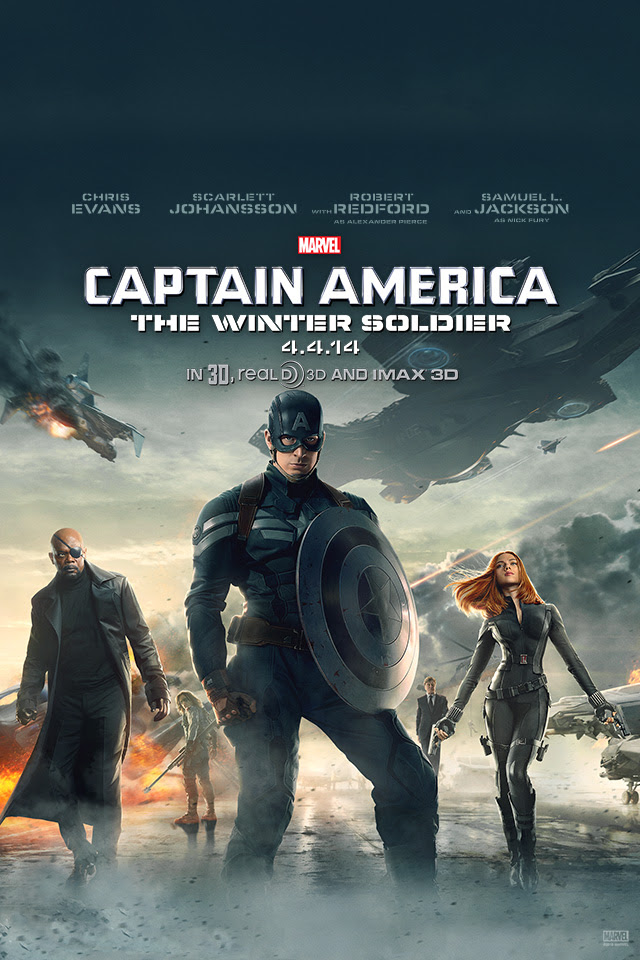 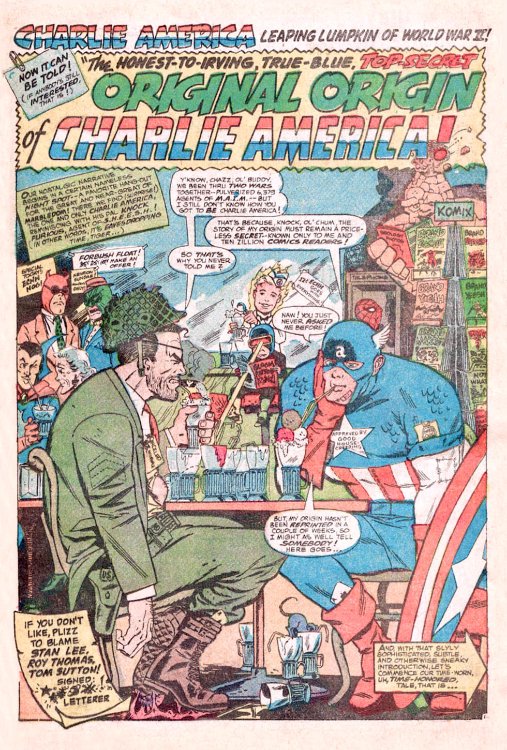 ...to prepare all three of you unfamiliar with the character ('cause we're really nice guys)! 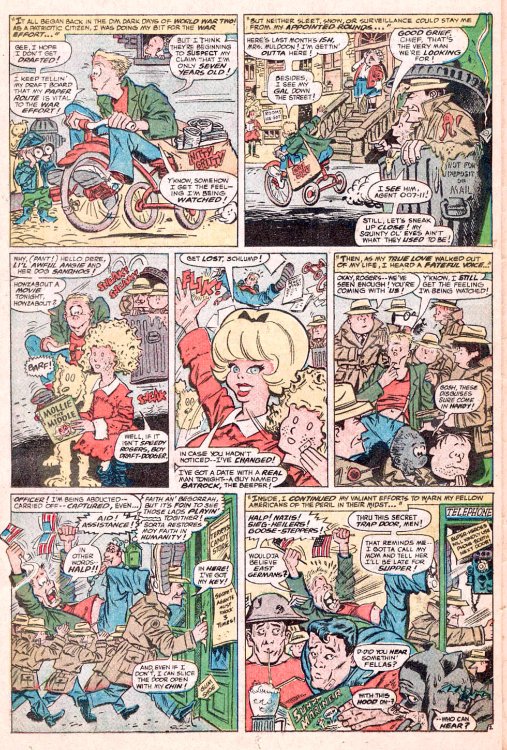 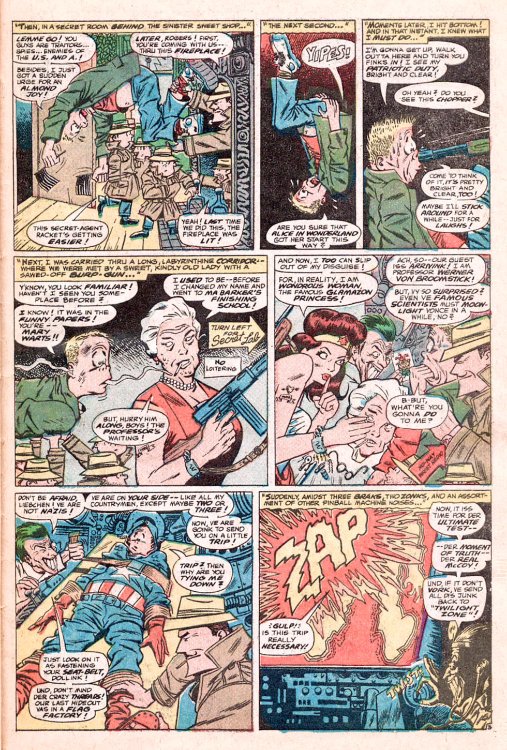 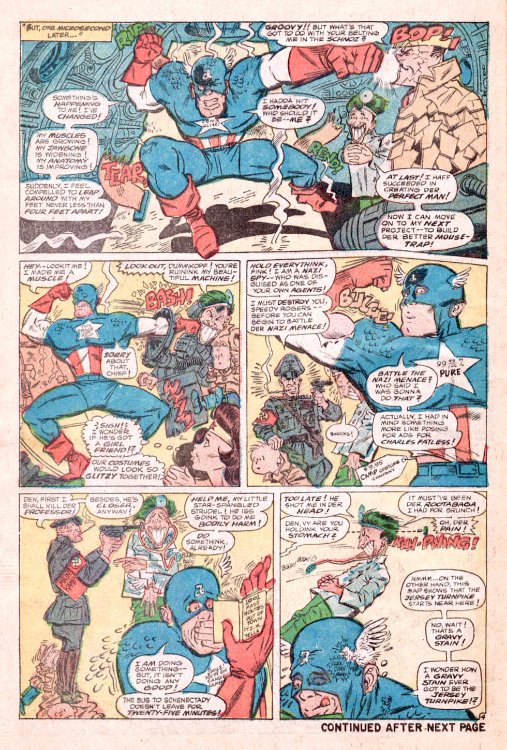 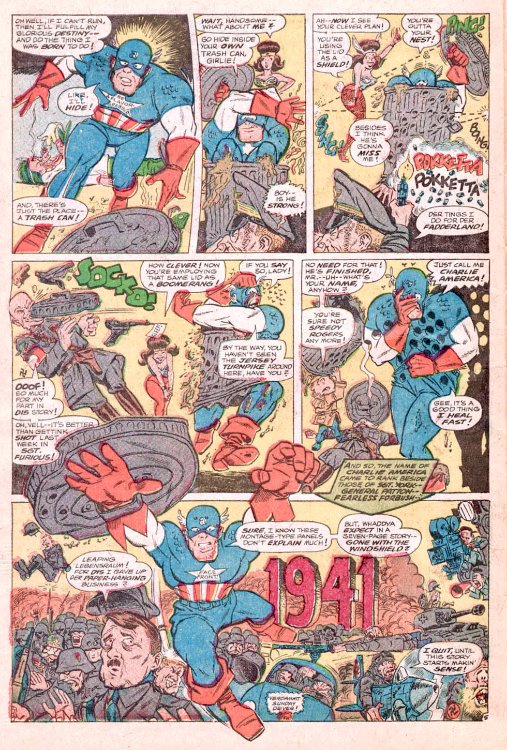 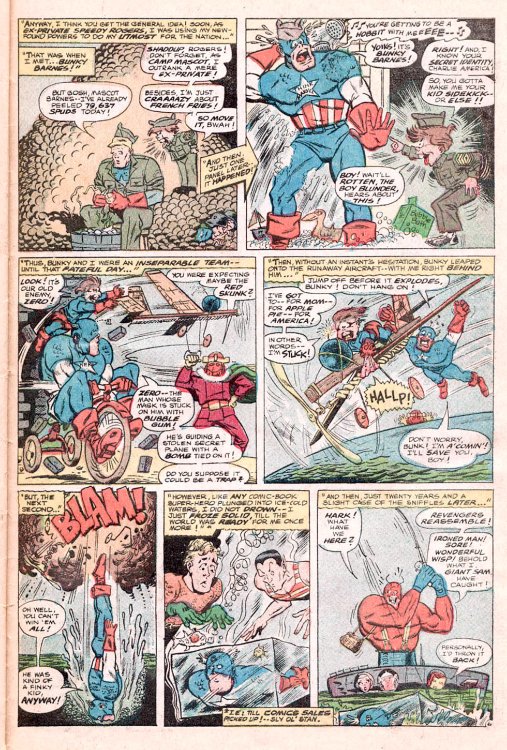 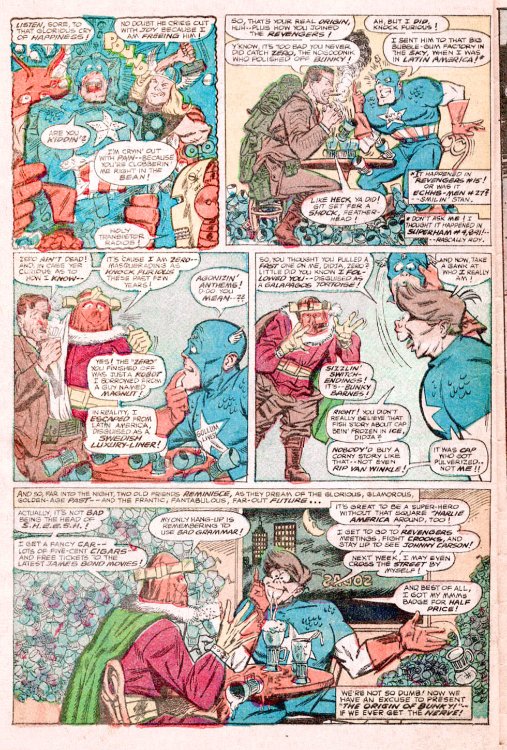 Ever wondered if a cape and tights could pass for haute couture?

On Thursday, Project Runway: Under the Gunn viewers will find out.
The four remaining competitors on the reality show will use Marvel characters such as Black Widow, Captain Marvel (shown above), Falcon, Hawkeye and the Guardians of the Galaxy as inspiration for a ready-to-wear challenge. 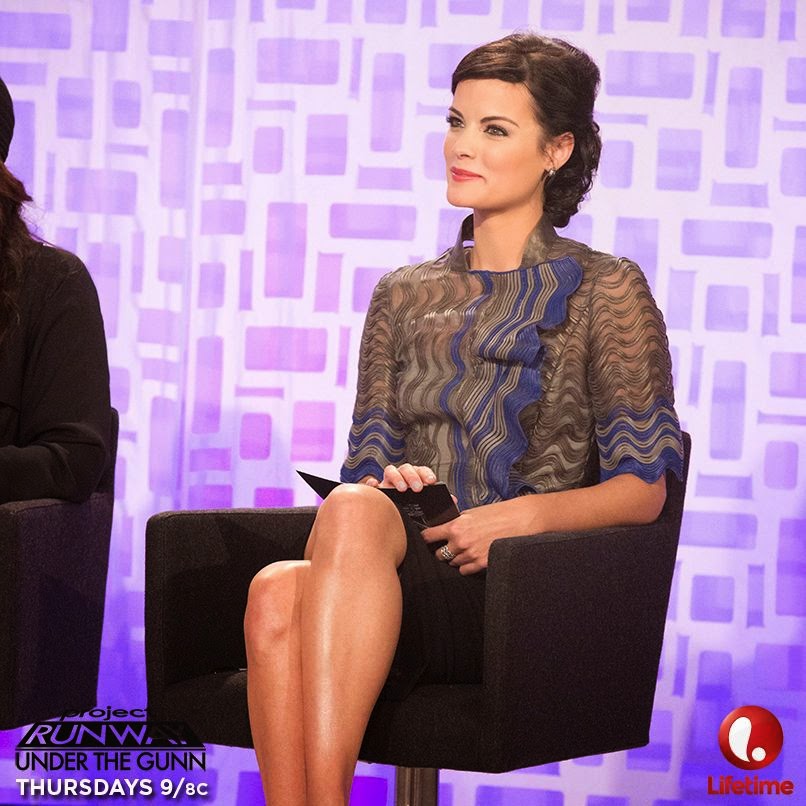 Jaimie Alexander (Lady Sif on Agents of S.H.I.E.L.D. and the Thor films) will serve as a guest judge ready to school the hopefuls on all things fierce.
Cort Lane (that name just sounds like a superhero), Marvel’s vice president in charge of animation development and production, will also be on hand as a guest mentor.
Catch it Thursday evening on Lifetime, 9 p.m. ET/PT.
Posted by Britt Reid at 4/02/2014 11:52:00 PM No comments:

It was 75 years ago this week that criminals first stammered "Th...th...th...BAT-MAN!"
Thank you, Bob Kane...and Bill Finger, Jerry Robinson & Gardner Fox.
Above art by Bob Kane, scanned from recently-discovered page proofs of Detective Comics #27 (1939), is his first appearance in a story.
(He's also on the first page of the tale, but in silhouette.)
BTW, those first-generation proofs as close as any of us will ever get to the long-lost original art.
Posted by Britt Reid at 4/01/2014 10:23:00 AM No comments:

Easily one of the weirdest strips ever... 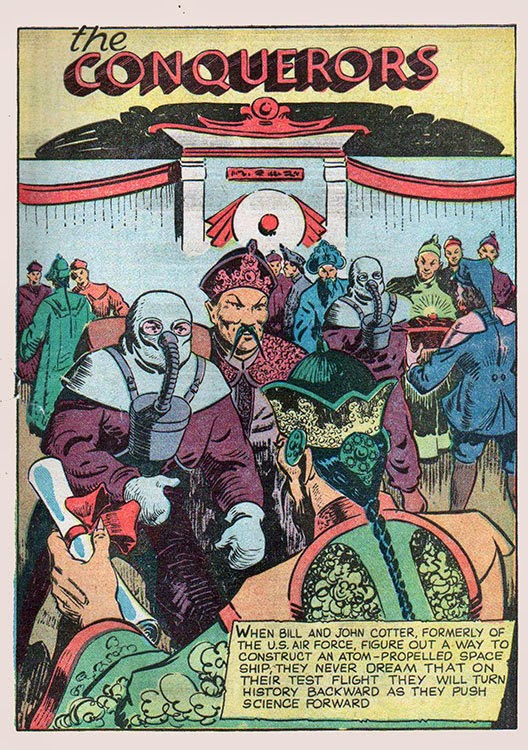 ...from the only issue of the only comic this publisher ever produced! 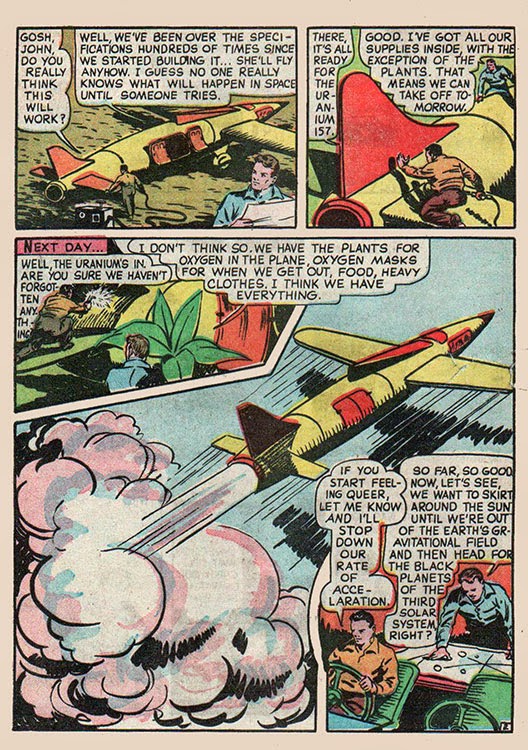 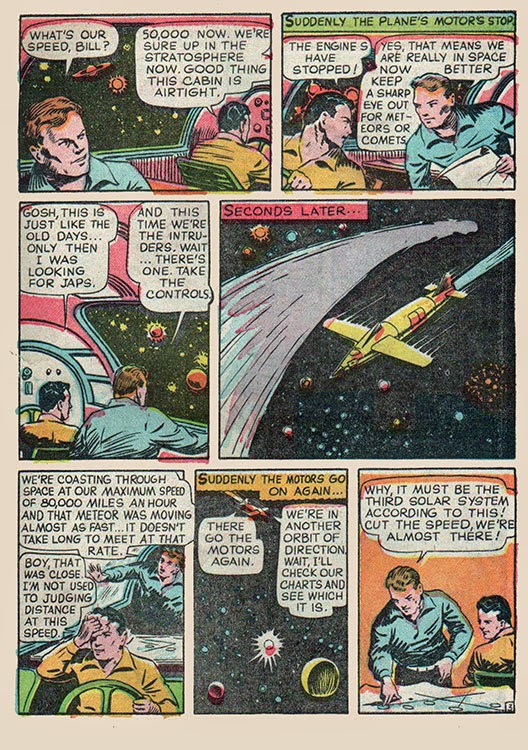 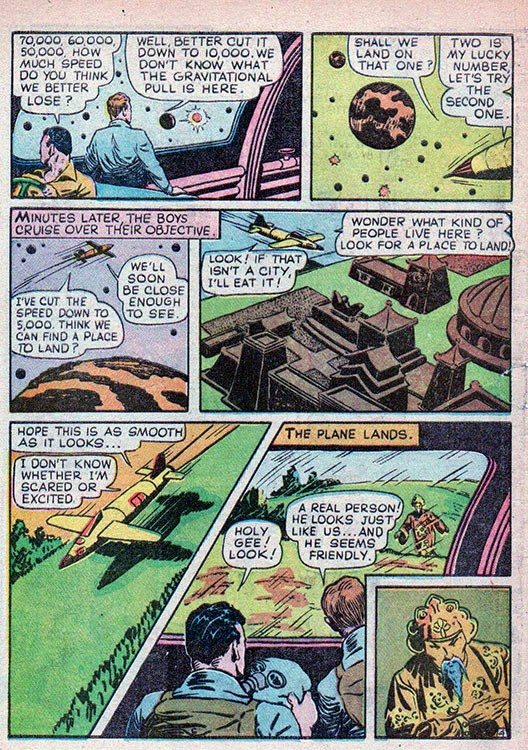 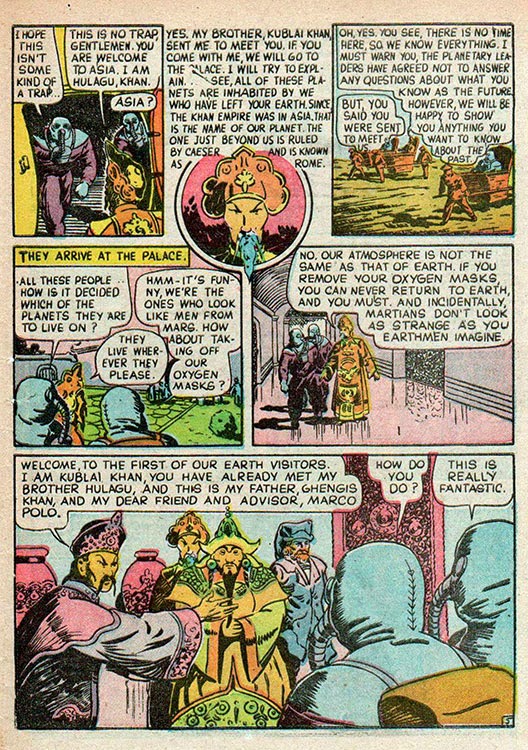 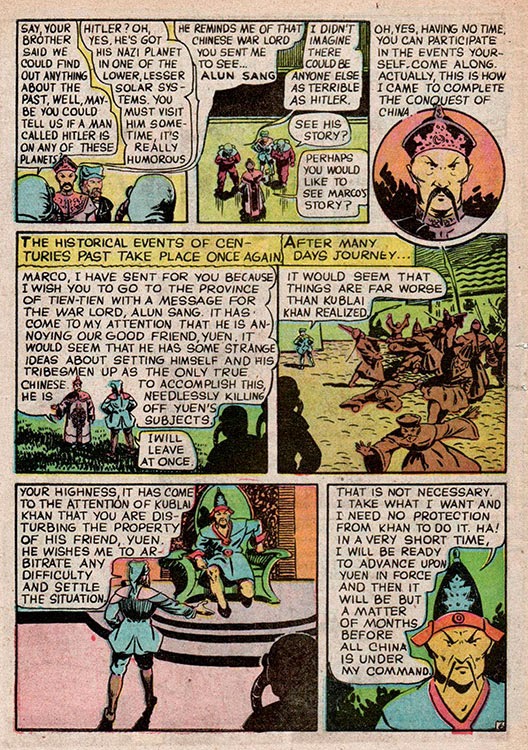 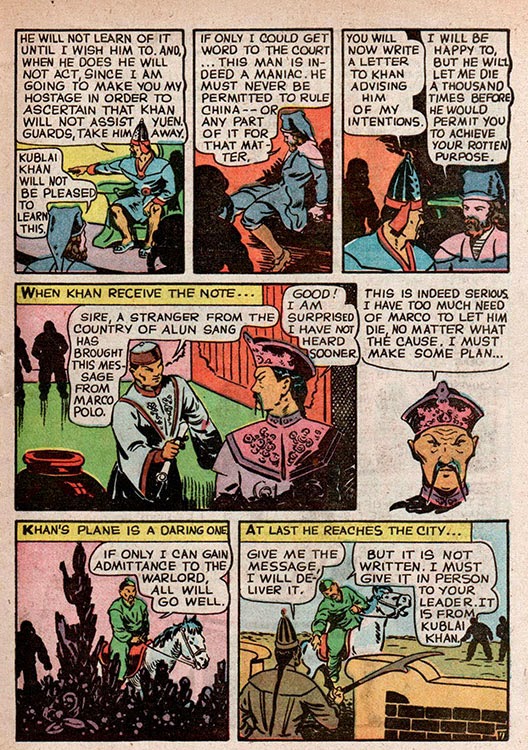 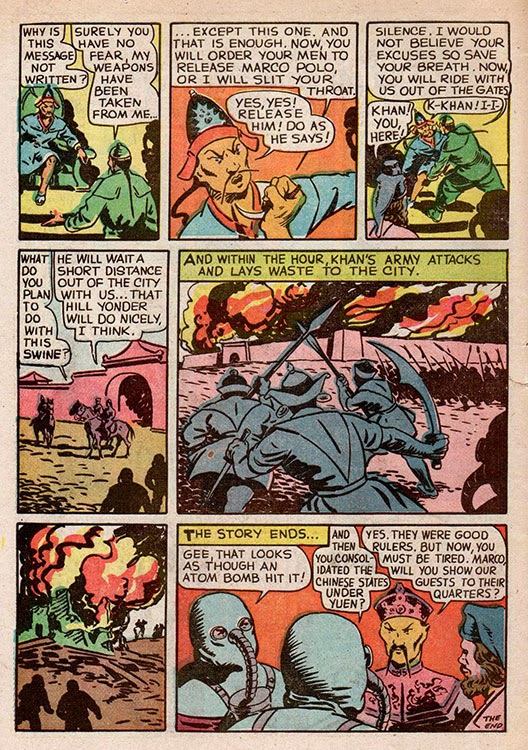 What did the creators of this series have in mind?
It takes place on another world where long-dead people from Earth's past are now apparently immortal and can manipulate time itself!
In addition, it seems that every ethnic group has set itself up on their own planet...which begs the question as to how they would get there, since none of these groups had the technology for space travel!
Is it Heaven?
Unlikely, since Adolph Hitler is there!
Plus, the locals say the astronauts can't remove their helmets and breathe the air or they'll be unable to return to Earth!
Illustrated by Warren King, and scripted by an unknown writer, this lead story from the one and only issue of Conqueror Comics (1945) never had a sequel.
In fact, the publisher, Albrecht Publishing, never produced another comic!
In most cases like this, unused material would be sold off to another publisher who would use it as "filler", somewhere in their comics...but not Albrecht!
So we'll never know what would've happened to Bill and John Cotter as they explored this weird part of space/time!
Posted by Britt Reid at 3/31/2014 12:24:00 PM No comments:

The Mysteries of CONQUEROR COMICS

Why is a man in ancient Chinese garb greeting an aviator debarking...
.. from an ultra-modern rocket plane?
And what is Conqueror Comics?
The answers to these and other pertinent questions will be found here
TOMORROW!
Posted by Britt Reid at 3/30/2014 01:01:00 AM No comments: