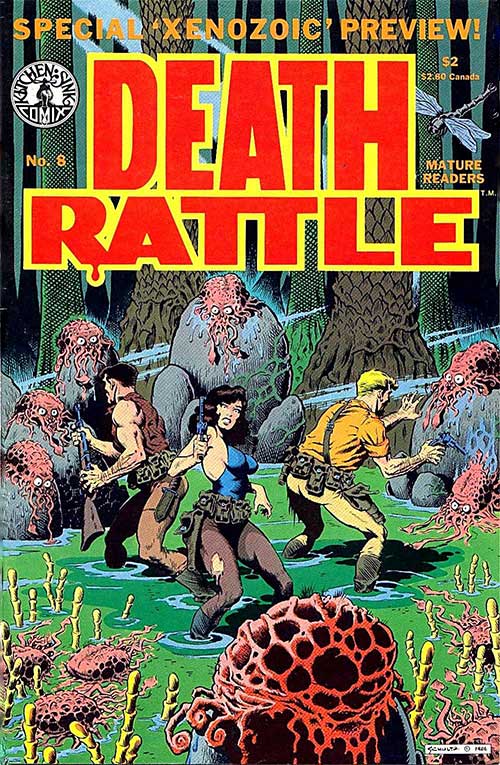 ...actually we haven't seen this...nor will we!
It's a "symbolic" cover, designed to hook you into reading the comic.
And, hoo boy, does it work!
On a post-apocalyptic Earth several centuries from now, a rescue team checks up on a scientific research outpost that went mysteriously silent.
They find one mutilated survivor, and the group splits up to search for others... 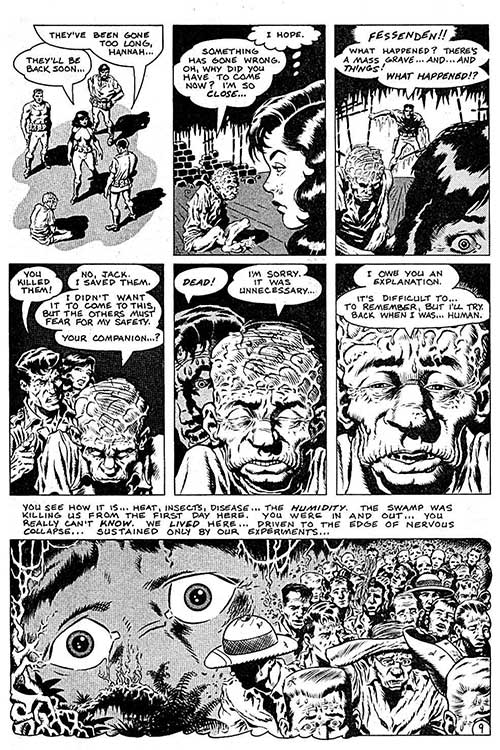 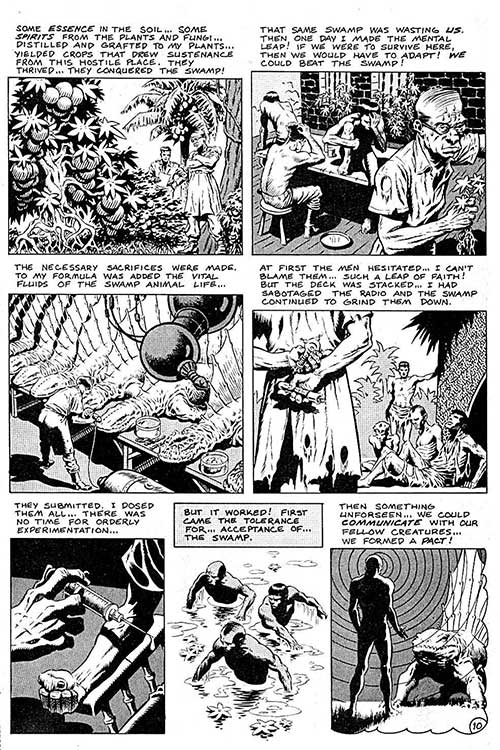 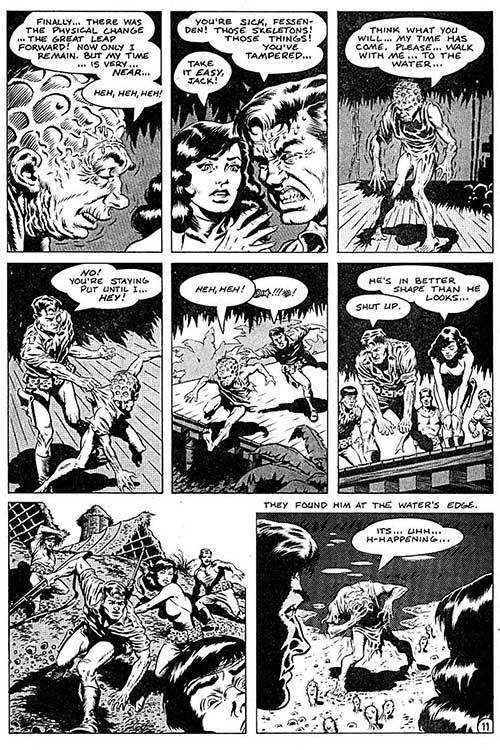 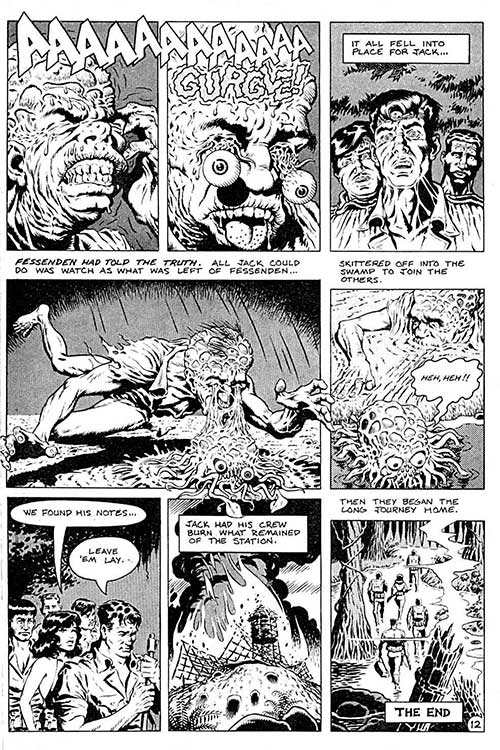 Wow!
Now THAT'S an introduction!
Up-and-comer Mark Schultz created, wrote, and illustrated this tribute to dinosaurs in general and EC Comics of the 1950s in particular.
Dennis Kitchen, editor-publisher of Kitchen Sink was so sure of the potential for this series, he didn't even wait to see how the sales were on Death Rattle #8, as shown by this ad in the back of the book... 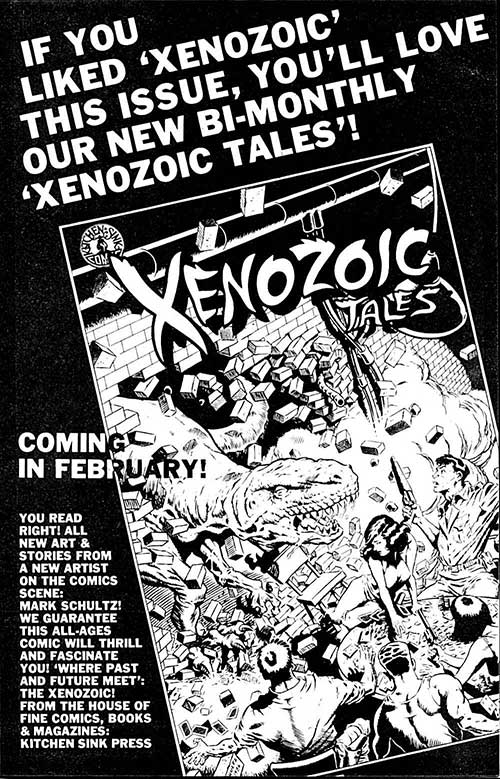 The book ran for 14 issues, and sold well.
There was also a one-shot 3-D issue adapting earlier stories to the 3-D format.
Problem was that Mark Schultz, like Dave Stevens, Mike Kaluta, Neal Adams, and a number of other creatives, though incredibly-talented, was also exceedingly sloooooowww, so the book went from bi-monthly to quarterly to semi-annually.
Kitchen Sink tried using back-up tales (overseen by Schultz) by other writers and artists while Schultz did the lead stories, but the book always had trouble keeping a regular schedule.
Even with that, the series built up a devoted following and tie-in merchandise like t-shirts, action figures and other goodies were grabbed off comic store shelves as fast as they were stocked.
Marvel's Epic imprint reprinted the early tales in color under the name Cadillacs & Dinosaurs.
Interest from licensees in this version resulted in mainstream media tie-ins including a popular arcade game, home video console games, and an animated tv series...which resulted in its' own comic series from Topps that did new stories based on the tv show and sequels to Xenozoic Tales comic stories!
The stories continue to be reprinted (most recently in an IDW "Artists Edition"), and there are rumors of a feature film that could lead to an ongoing franchise!
Posted by Britt Reid at 7/16/2016 09:08:00 AM No comments:

With one simple, invented word and a passion for dinosaurs and EC Comics... ...a young writer-artist named Mark Schultz created one of the more successful comic series of the 1980s! 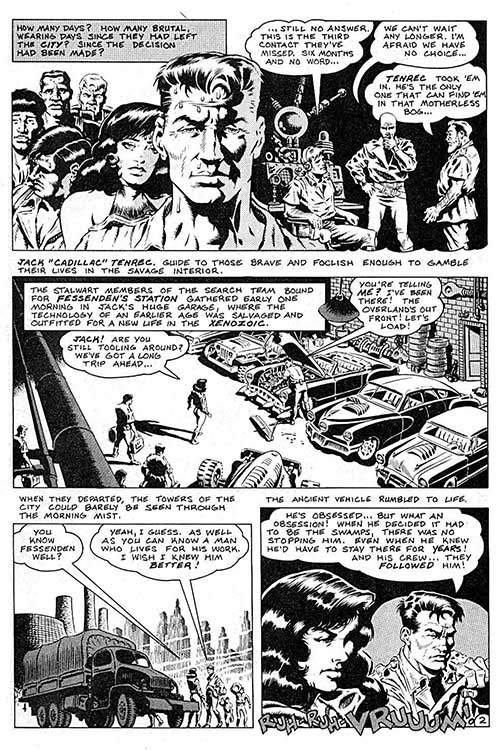 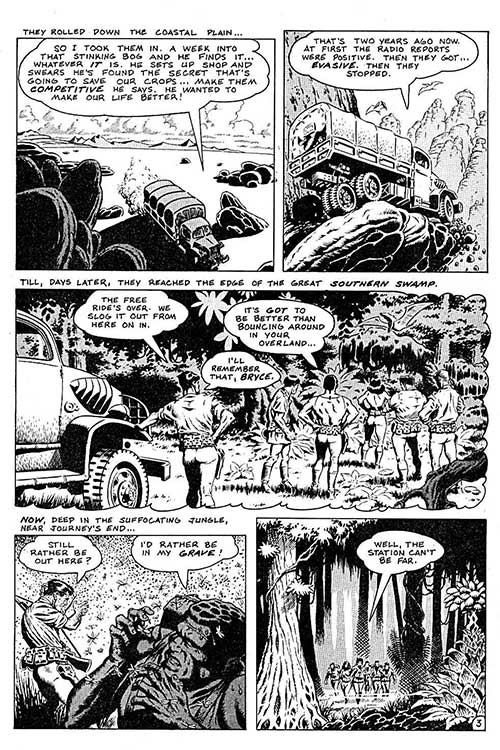 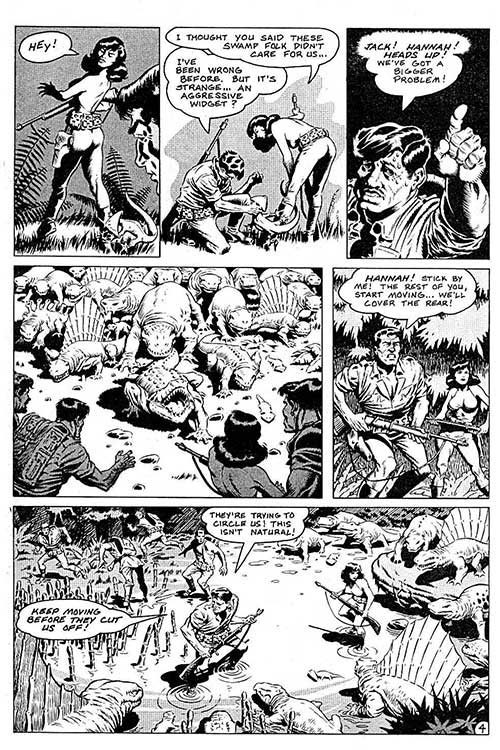 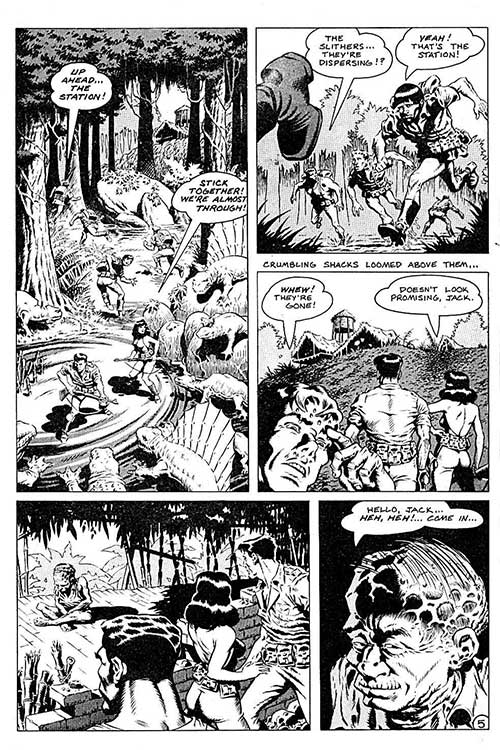 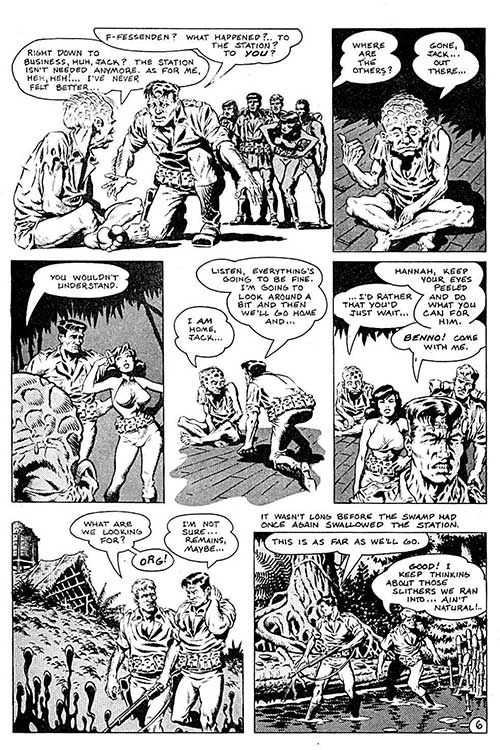 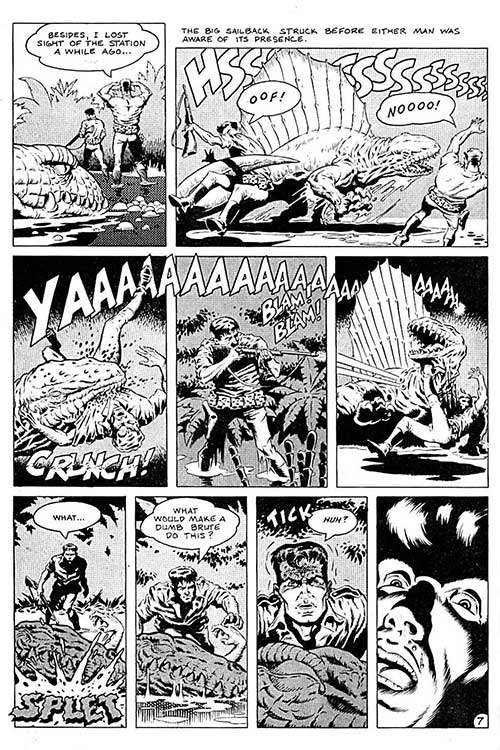 Esteban Maroto's WOLFF is Back!

As we promised...
...the saga of Esteban Maroto's post-apocalpytic barbarian continues HERE with the last tale published in America!
But fear not!
The remaining chapters that never made it to our shores will be presented this summer at our "brother" RetroBlog, Hero Histories!
Posted by Britt Reid at 7/14/2016 09:24:00 AM No comments:

Reading Room: FLASH GORDON "Chapter 4.1: the Man Who Would be Ming!" 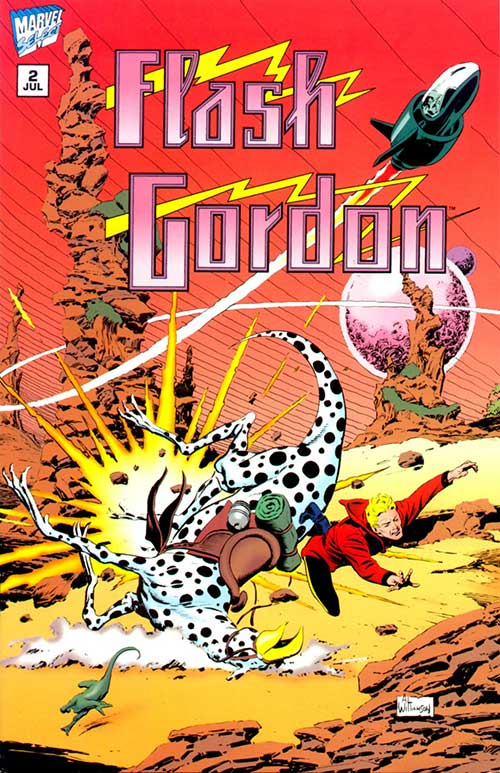 ...all you really need to know is Flash Gordon and Ming the Merciless are finally about to meet face-to-face! 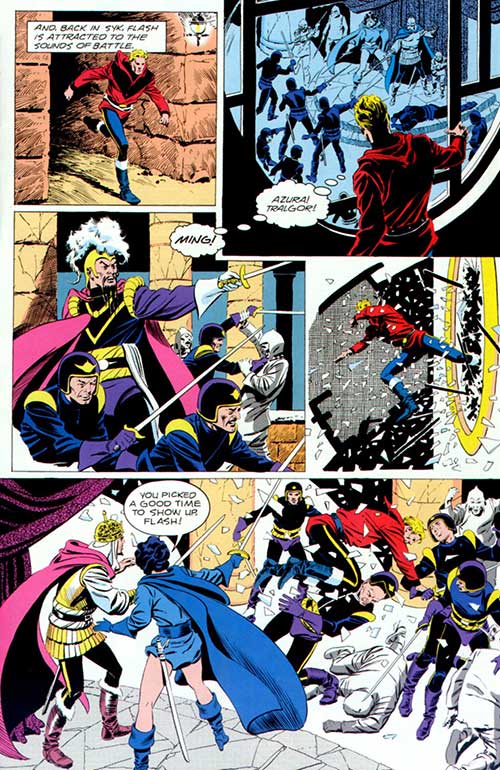 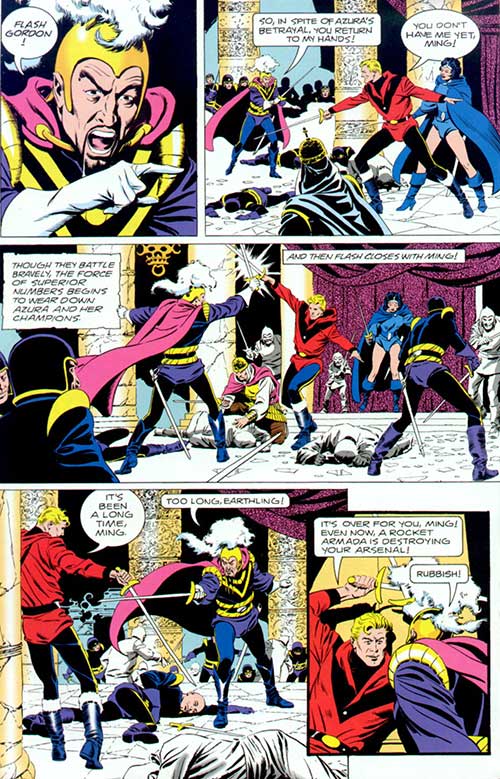 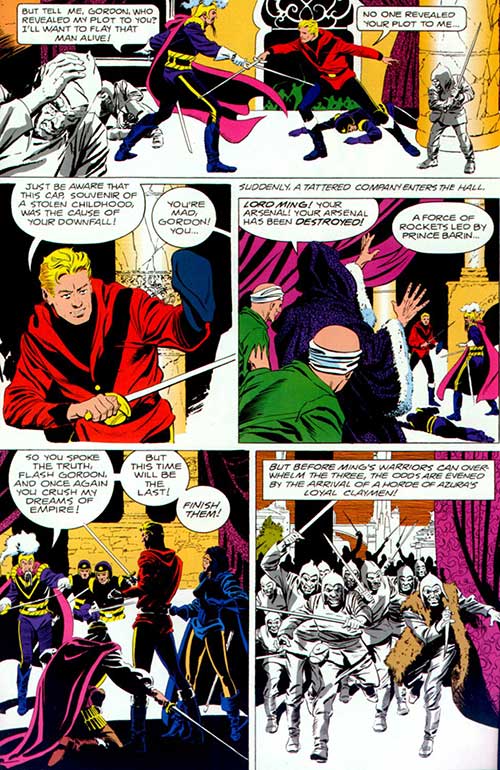 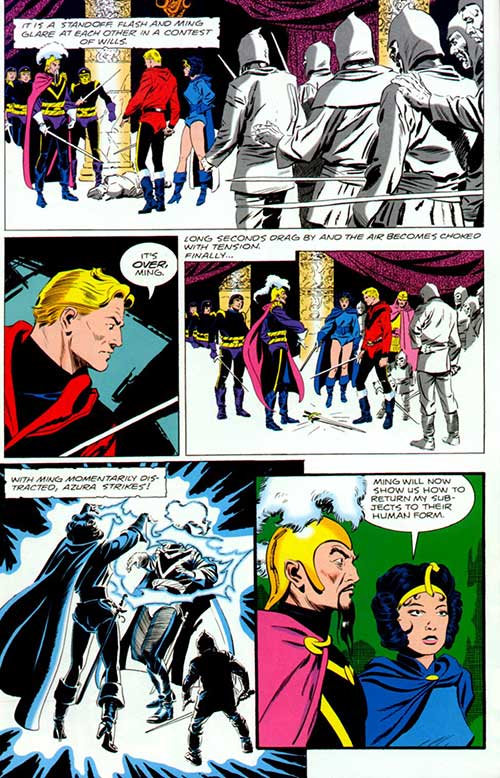 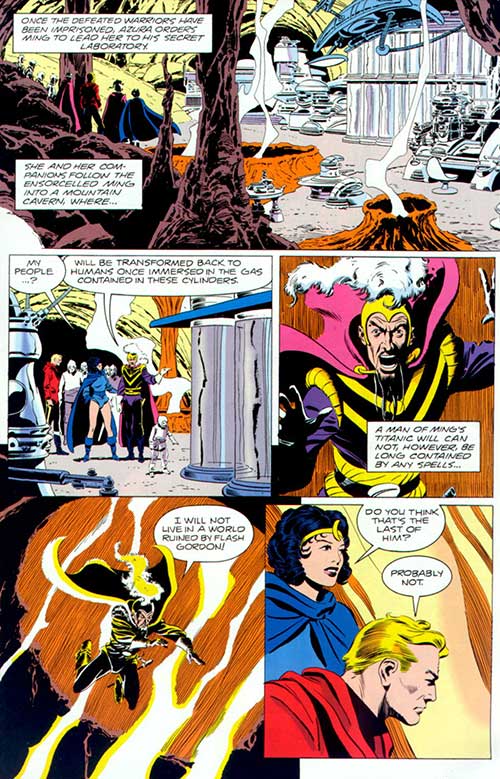 A classic high-adventure tale by writer Mark Schultz and illustrator Al Williamson, little-seen in either its' first publication in Marvel's Flash Gordon #2 (1995) or the reprint in the HTF Flesk Publications' Al Williamson's Flash Gordon: a Lifelong Vision of the Heroic (2009).
We have more rarities coming up, so watch for them!
Posted by Britt Reid at 7/13/2016 09:55:00 AM 1 comment: 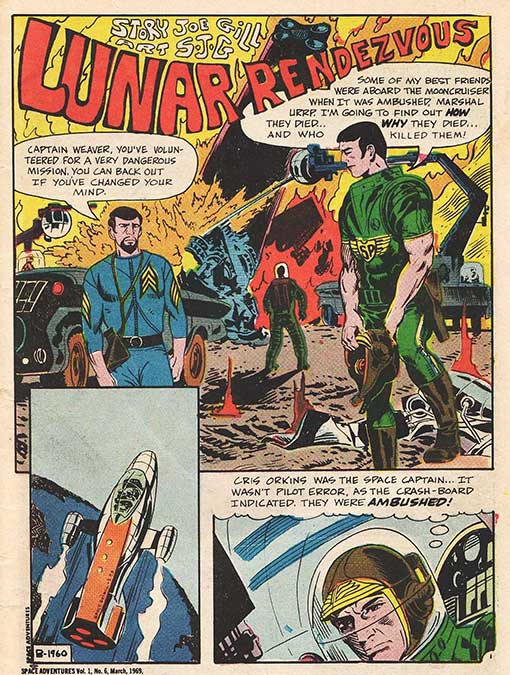 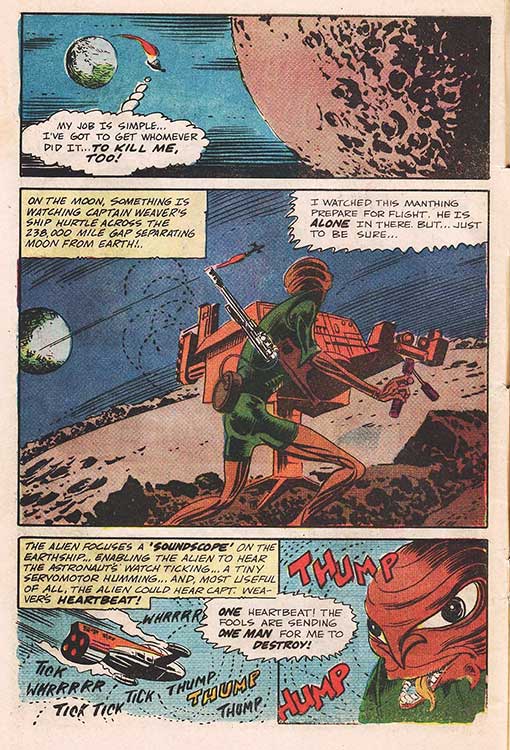 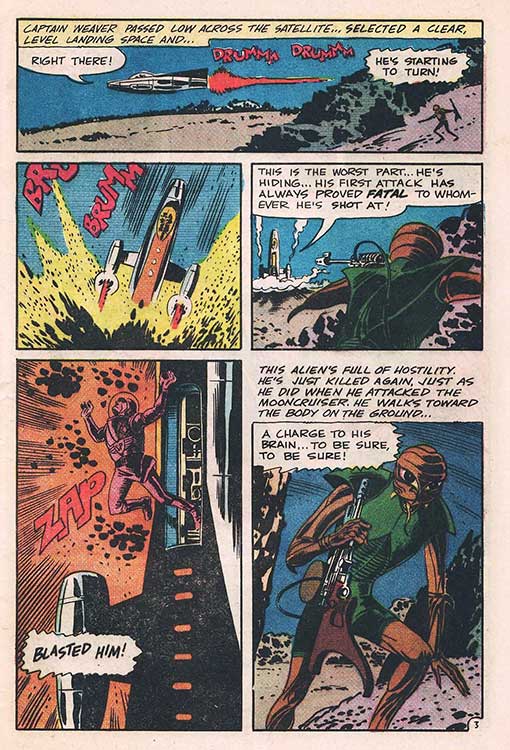 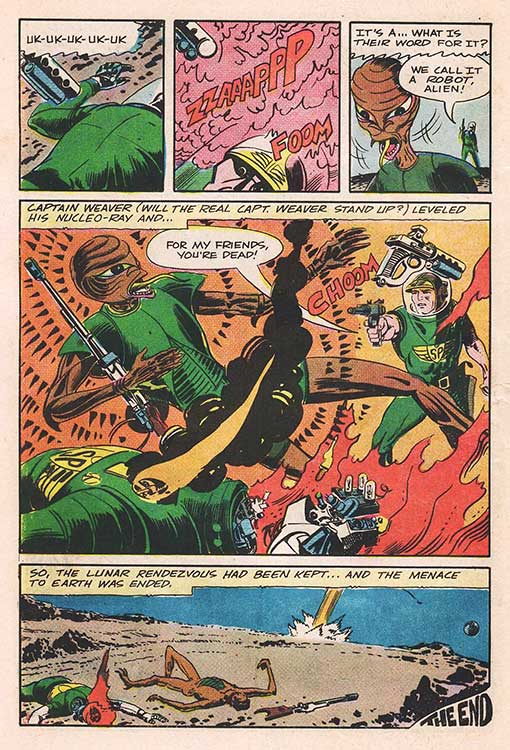 Sam Glanzman was an amazingly-versatile artist, whose work in every genre was usually exemplary.
Whether this was a rush job, or he simply had an off-week, or he was experimenting with a new inking style, it's just not up to his usual high standards.
BTW, you may notice the indicia says "Vol 1 Number 6", but the book is actually from Vol 2 Number 6!
Charlton's first Space Adventure title ran from 1952-56, then 1958-64 for a total of 58 issues.
This tale was from a 1968-69 revival of the title that lasted only 7 issues.
Posted by Britt Reid at 7/12/2016 02:21:00 PM 2 comments:

Reading Room CAPTAIN JOHNER AND THE ALIENS "Fear of the Unknown"

Continuing the saga of the first Aliens on Earth... ...we discover Earthmen are as frightened of the Aliens as they were when Earthmen landed on their world! 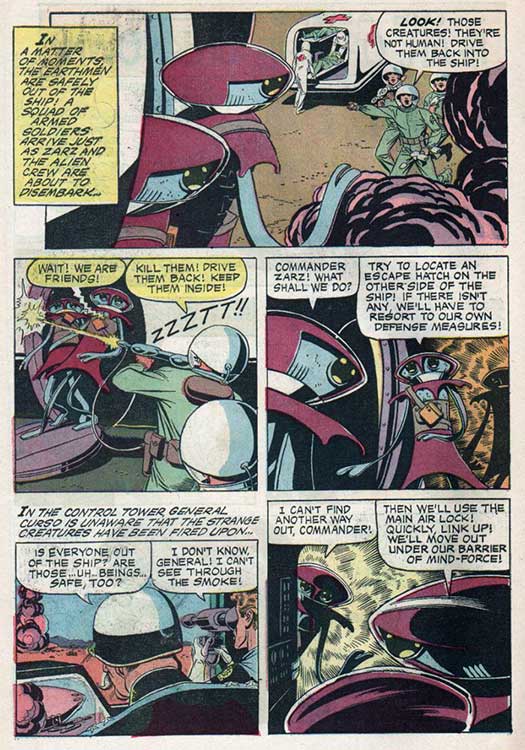 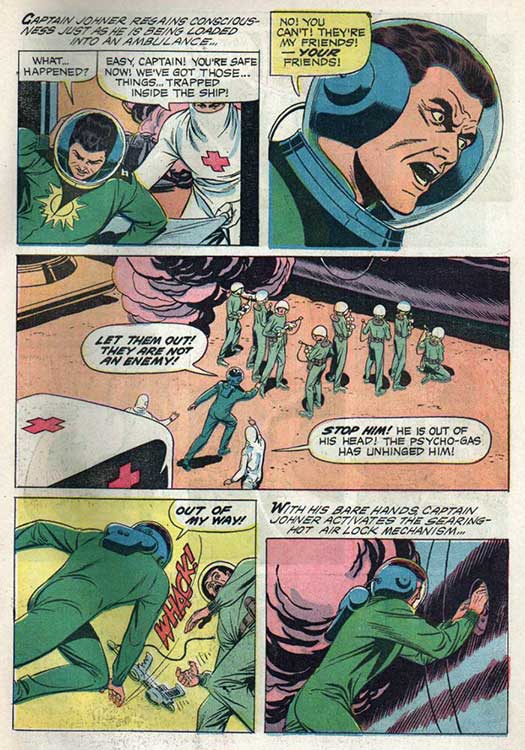 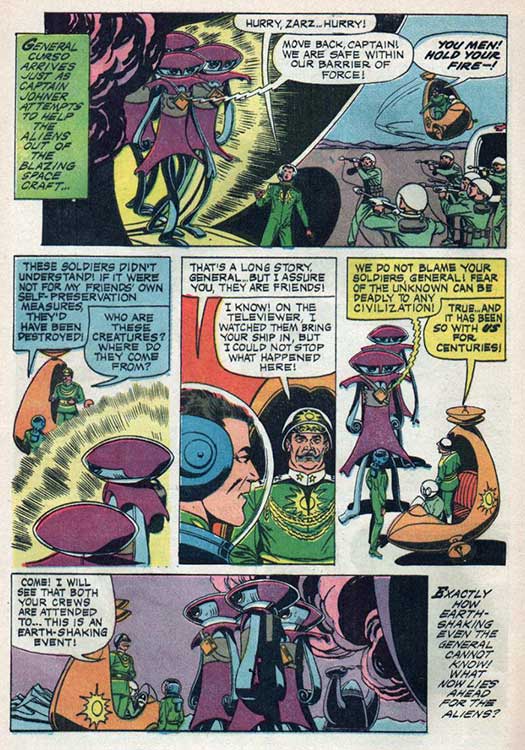 First, let me apologize for not posting a Captain Johner & the Aliens tale last week.
Monday was the 4th of July, so we were going to post CJatA on Tuesday, but the passing of actress Noel Neill preempted it, and, at that point, with an-already scheduled Flash Gordon for Wednesday, we thought it best just to bump the strip a week.
Today's tale from Gold Key's Magnus, Robot Fighter #10 (1965) continues the established pattern of xenophobia that both species apparently share.
It was also the final story to be reprinted in Gold Key's 1960s one-shot reprint anthology of the Aliens tales, leaving the audience for that book with a semi-cliffhanger.
Unlike them, we'll continue next week...
Posted by Britt Reid at 7/11/2016 05:16:00 PM No comments:

Each week, we post a limited-edition design, to be sold for exactly 7 days, then replaced with another.
This week we jump into the political world with a design we introduced in 2012, but is equally-timely today!
Besides the usual t-shirts, mugs, magnets, and other goodies, we're also offering this one as a poster for your office, dorm, bedroom, or (mounted on a stick) a protest march!
Posted by Britt Reid at 7/10/2016 12:35:00 PM No comments: