You're an owner or home stager looking for an inexpensive, but chic piece of art for that condo or townhouse you're prepping for the real estate market.
You want something that won't say "cliche" or worse..."tacky"!
Try Psychedelic Auto Tour 07, part of a series of Peter Max-style art pieces done in the 1960s by noted European artist Michel Quarez.
Bright, colorful, and the comic book-style multi-panel format actually tells a story!
It's a riveting piece that screams "sophisticated retro-kool"!
Posted by Britt Reid at 9/25/2010 02:24:00 AM No comments: 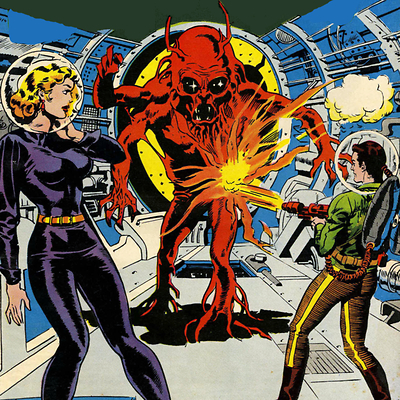 Each week, we post a limited-edition design, to be sold for exactly 7 days, then replaced with another!
This week...Alien Halloween Party Crasher!
Available on a variety of goodies including mugs, t-shirts, and greeting cards that are PERFECT for Halloween Party invites!
Order now...before he/she/it crashes YOUR party!
Posted by Britt Reid at 9/24/2010 12:08:00 AM No comments:

The Horror...the Horror (comics, that is)!

Monster Crime!
Now that's a title!
Yeah, they knew what budding juvenile delinquents wanted back in the 1950s!
As you might have guessed, the upcoming Halloween holiday has inspired the Atomic Kommie Comics™ crew to add like mad to our Horror Comics of the 1950s™ section.
And, what titles did we add to our kool kollectibles kollection?
Besides the aforementioned Monster Crime, there's Tales of Horror, Horror from the Tomb (see a trend?), Beware! (with a fantastic Frank Frazetta cover!), and The Clutching Hand! (We had a really good convention season this year, purchasing complete runs of several series at bargain prices)
We already had The Hand of Fate, Horrific!, Weird Adventures, Baffling, Challenge of the Unknown, Terror Tales, Haunted, The Beyond, Weird Terror, Weird Mysteries, Weird, Diary of Horror, WitchCraft, and Eerie!
Plus collectibles with our ghoulishly-graphic, viscerally-vintage Horror Comics of the 1950s™ logo!
BTW: the Tote Bags featuring these designs would make GREAT trick-or-treat bags!
Be the envy of all the kids on your block this All Hallows Eve!
Posted by Britt Reid at 9/23/2010 01:01:00 AM No comments: 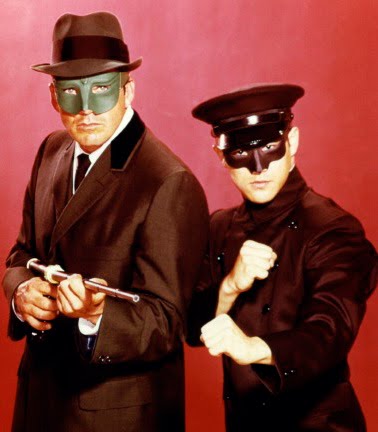 Frank Miller tries to kill The Green Hornet!
No, not THE Frank Miller, writer-artist of 300

, and other comic classics!
This guy was a criminally-oriented gemologist who tries to freeze the Hornet in today's episode "Programmed for Death", the third show aired on ABC in 1966, but the first episode filmed.
There's a number of differences between what you'll see here and in our previous two YouTube Wednesday posts.
It's slower-paced since it had to introduce the various elements of the show to an audience unfamiliar with the character. (The last Green Hornet radio show

was 14 years earlier, and an entire generation had grown up with no idea as to who he was!)
The heroes have different masks (see photo) that actually work better to hide their identities, but obstructed peripheral vision. After this episode, molds were taken of their faces and new, form-fitting masks were created and used for the remainder of the show's run.
You'll note that Kato does all the hand-to-hand fighting in this episode.

While the 60s tv series is not yet available on official dvd, it is available on YouTube.
Here's the THIRD broadcast episode "Programmed for Death" in three segments.
Enjoy!

The Black Panther IS the Man Without Fear!

Christine O'Donnell--Which Witch was Which? 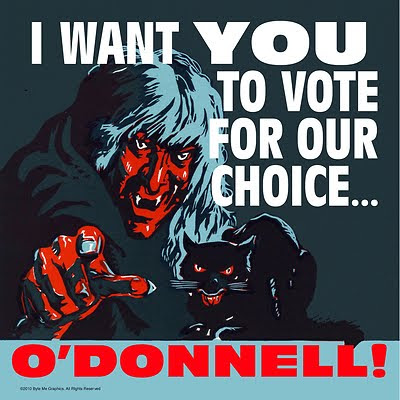 When a clip from Bill Maher's old series Politically Incorrect

..it positively inspired me to do a campaign poster for her targeting an audience sadly neglected by the Tea Party up to now!
I've even given it it's own shop HERE, filled with t-shirts, mugs, magnets, messenger bags, and other collectible goodies just perfect for upcoming rallies!
PLUS: I did an extra-large version as seen HERE... 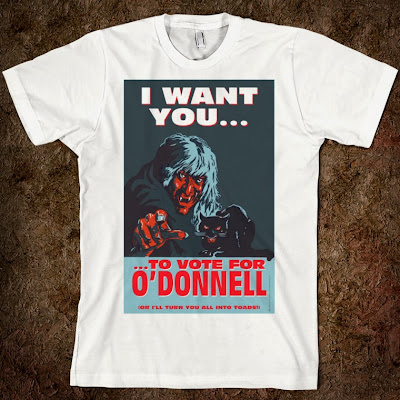 Set in the heart of 2027 England's authoritarian security state, The Curfew could be described as a miniature Canterbury Tales

set in a not-so-distant future, where citizens must abide by government security measures and second-class citizens are placed under curfew at night.
The player must navigate this new locked-down world, and engage with the characters met along the way, in order to work out who to trust with some leaked, government-shaming data.

The Curfew takes place over one night in which four ordinary people (the immigrant, the dissident, the ex-cop, and the youth) find themselves trapped by the curfew in a hostel, re-purposed as a safe house.
When the game begins the player is passed a data-laden disk containing information that could hopefully be disastrous for the government if delivered into the wrong hands.
The player - only hours away from capture - must find someone in the safe house to trust with this information. To fill the curfew hours the characters share their stories: when they leave the room – depending on the player’s choices – their outcomes will be revealed.

“Fully operating curfews actually do exist in over a thousand towns and cities across Britain today, where anyone under the age of 16-years-old found outside after 9pm can be removed from the streets and sent home by police,” says Alice Taylor, Commissioning Editor, Channel 4 Education.
“The Curfew was commissioned in response to this.
So many civil liberties and freedoms have been outlawed, piece by piece, in recent years: it’s no wonder we’re told so many young people are disaffected by politics and politicians."

The game is set over four episodes: each episode focusing on a different characters’ story using flashbacks to reveal how they ended up in the safe house that night.
You, the player, are a young political agitator working to undermine the totalitarian state that has Britain in its grip.
At the start of the game you are given a data disc containing information on a scandal that will damage the government if leaked.
But the police are mere hours away from tracking your location.
You have to get the information into the hands of a sympathetic party before you are caught, but who…?
You make your way to a local B&B, a safe house where ‘Class B’ citizens who didn't manage to make it home before curfew can pay to stay the night.
Over the course of the game you must get to know the people there – listen to their stories and decide who amongst them is trustworthy.
The choices you make in questioning your fellow ‘safe house’ mates will determine how much they trust you and how likely they are to do the right thing with the information should you choose to give it to them.
As the night draws to a close, just before the police burst through the door, you must decide whom to give the disc to.
The choices you make will either render you a hero of liberty and freedom, or will see you rotting in jail.

The Curfew is a browser-based game delivered in Flash 10.
The production includes a range of mixed media techniques including 3D sets, illustrative composition and seamlessly integrated live footage giving a cinematic effect to the game.

About The Curfew characters
The Immigrant
Aisha (ARIA PRASAD) is an Iraqi immigrant who came to the UK when she was four.
She’s conscientious, hardworking, and British, with no desire to return to a country she can’t remember and thus, is on a mission to find the person who can get her replacement work permits to prevent her wrongfully-arrested parents from being deported.
The Dissident
Leah (AMY NOBLE) is an enemy of the system: she uses drugs, breaks curfew, and refuses to conform to the rules of society.
She runs illegal post-curfew parties in Brighton, using her bureaucratic day job as cover and backup.
But she has been driven to blackmail after her own after-curfew revolutionary-hedonism has been discovered.
The Ex-Cop
Saul (DEREK RIDDELL), 40, works in security, is divorced with two kids. He misses his family but makes no effort to stay in touch with them.
He has spent this night covering up an ex-colleague’s crimes – he really doesn’t want any trouble, but as the evening wears on it becomes apparent that his so-called friends have made that unavoidable…
The Boy
Lucas (FINN JONES) is bored: he is young, antisocial and rebellious.
He doesn’t seem to care about risking both his freedom and future citizenship, simply to get hold of a non-government sanitized videogame… he’s wasted enough time playing government-approved rubbish.
On this night Lucas had to find something that wasn't terminally boring, whatever the dangers in finding it…

Note: I normally don't plug online games, but this one had two things going for it that prompted me to do so...
1) a similar dystopian future England feel as V for Vendetta

, one of my favorite graphic novels and 1984

, one of my favorite prose novels. 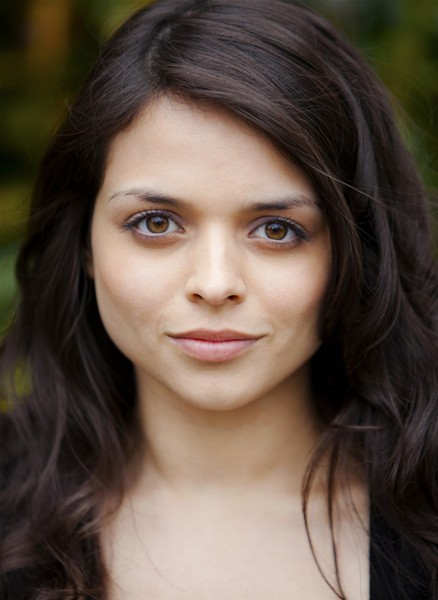