Review: Indiana Jones & the Kingdom of the Crystal Skull 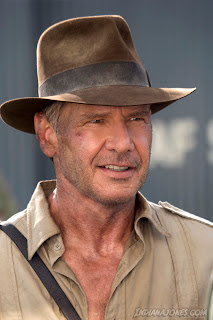 True pop culture fans enjoy watching their heroes getting older along with them.
Look at...
the Classic Star Trek crew, from the 1960s tv series to the 1980s-1990s films!
DC Comics' Earth-2 "original" superheroes , including the Justice Society with it's "Golden Age" versions of Superman, Batman, Green Lantern, etc.!
Marvel Comics' (now-abandoned) "real-time" timeline for it's characters (given up in the late 1990s, when it became too unwieldy to explain the Fantastic Four's Reed Richards & Ben Grimm fighting in World War II, and Tony Stark becoming Iron Man in VietNam.)
Indiana Jones and the Kingdom of the Crystal Skull follows thru with a similar conceit.
It's been 19 years since 1989's Indiana Jones and the Last Crusade (set in 1938), so 2008's IJ&tKotCS is set 19 years later, in 1957, allowing real-time and fictional timelines to run together.
Leaving Nazis, the supernatural, and pulps behind, we're now in the era of Commies, flying saucers, and paperbacks.
Like most well-done fiction series, Indiana Jones adapts to a changing world.

Good points:
1) Indiana Jones himself. Harrison Ford can still believably kick ass (A trait he shares with screen "daddy" Sean Connery, the one, true James Bond). He's a little slower-moving, but he makes up for it with the cunning that comes with age.
2) Marion Ravenwood. Confession time here. Between Raiders, Animal House, and Until September, I had a serious crush on Karen Allen in the '80s! And after this, I have a crush again!
She's a true natural beauty, no botox, no plastic surgery! When you look up MILF in the dictionary, you'll see a pic of Karen as she appears today!
In terms of character, Marion's still the feisty woman who can do anything a guy can do, sometimes better!
3) Comrade Dr. Irina Spalko: Cate Blanchette with the silliest accent outside of June Foray's Natasha Fatale. But, in the context of the story, it works. (With the exception of Belloq, the villains in Indy films have always been ethnic stereotypes.)
4) Shout-outs to the "late" Marcus Brody and Henry Jones, Sr. Regrettably, Denholm Elliot is no longer on this mortal coil, but Marcus (in spirit) saves Indy in one scene!
5) Stunts. The good old-fashioned kind where you know it's a stuntman, but hey, he's really putting his ass on the line for your entertainment!
6) Closure for the lead characters. The series can end right here.
Let them live "happily ever after"!

Bad points (there are a couple)
1) CGI. While most of the stuntwork is the traditional "yes, he is risking bodily harm" type that made the Indy and James Bond films such must-sees, a major swordfight on two vehicles is too obviously green-screen.
Add army ants and comedy-relief prairie dogs, and we're veering a little too close to Tex Avery cartoon-level stuff.
One more point: the flying saucer finale really could have been a bit simpler, without so much visual clutter. Think Earth vs. the Flying Saucers or This Island Earth, not StarShip Troopers!
2) Mutt Williams. Shia LeBeouf is not Marlon Brando or even Nick Adams.
The Rebel Without a Clue is petulant and annoying. (Thank God Hayden Christiansen was apparently too busy!)
Shia's not who I would have chosen to eventually replace Harrison as the franchise lead. But then, I had hoped for Clive Owen as the new James Bond!
And, not to give anything away, but George Lucas has serious "daddy" issues in his films!
3) No mention of Sallah (John Rhys-Davies) Not even a cameo at the film's conclusion? He's one of Indy's best friends!
4) Why would Indy, an archaeologist, be called to the Roswell crash in 1947? 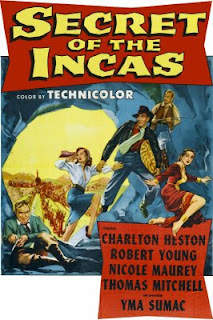 In the mid-1950s, an archaeologist/adventurer in a fedora and leather jacket traveled to South America to seek native artifacts said to have been given by the gods to the Inca.
He battled rivals including other archaeologists, and Communist agents.
He ran into an old girlfriend.
Sounds like Indiana Jones & the Kingdom of the Crystal Skull, doesn't it?
Nope!
Before Harrison Ford as Indiana Jones...was Charlton Heston as Harry Steele in Secret of the Incas!
Huh?
Never heard of it?
It's never been released on home video in any form in the US or UK.
But we at Atomic Kommie Comics acquired the poster, scanned and digitally-remastered it, and are offering a bunch of kool collectibles, including t-shirts, mugs and other stuff with this hard-to-find art, available to you at Secret of the Incas Art
A number of sources including Raiders of the Lost Ark costume designer Deborah Nadoolman acknowledge the brown leather jacket, fedora, tan pants, an over-the-shoulder bag, and revolver w/holster came from this film. (Deborah wisely left out the scarf!)
SotI was filmed on location in Peru at Cuzco & Machu Picchu (the first time that a major Hollywood studio filmed at the archeological site). Five hundred native Indians were used as extras in the film.
As for the plot elements...judge for yourself...
While it's not available on video, as an Atomic Kommie Comics freebie bonus, here's the link to the Internet Archive's mp3 of the Lux Radio Theatre 1-hour adaptation of the Secret of the Incas starring Charlton Heston, himself!
Posted by Britt Reid at 5/18/2008 07:15:00 PM No comments: