Available NOW is a digitally-remastered, magnificent reproduction of the poster announcing the Star Spangled Avenger's FIRST cinematic appearance in the most expensive Republic super-hero serial ever!
He doesn't have a shield.
Or a kid sidekick named Bucky!
In fact he wasn't even scrawny recruit Steve Rogers!
He was "two-fisted District Attorney Grant Gardner"!
(The actor, Dick Purcell, died from the strain of performing the role! No lie!)
There was no Red Skull!
(But the created-for-the-serial villain, The Scarab, was played by classic b-movie baddie Lionel Atwill at his snarling, sneering, smarmy best!)
The heroine, Gail Richards, was played by one of b-movies hottest ladies, Lorna Gray (who usually played villainesses)!
For more info about the 1944 serial, we presented a classic behind-the-scenes article about it HERE!
Makes a great gift for the Captain America fan in your life (or yourself, as long as you're not The Red Skull)! 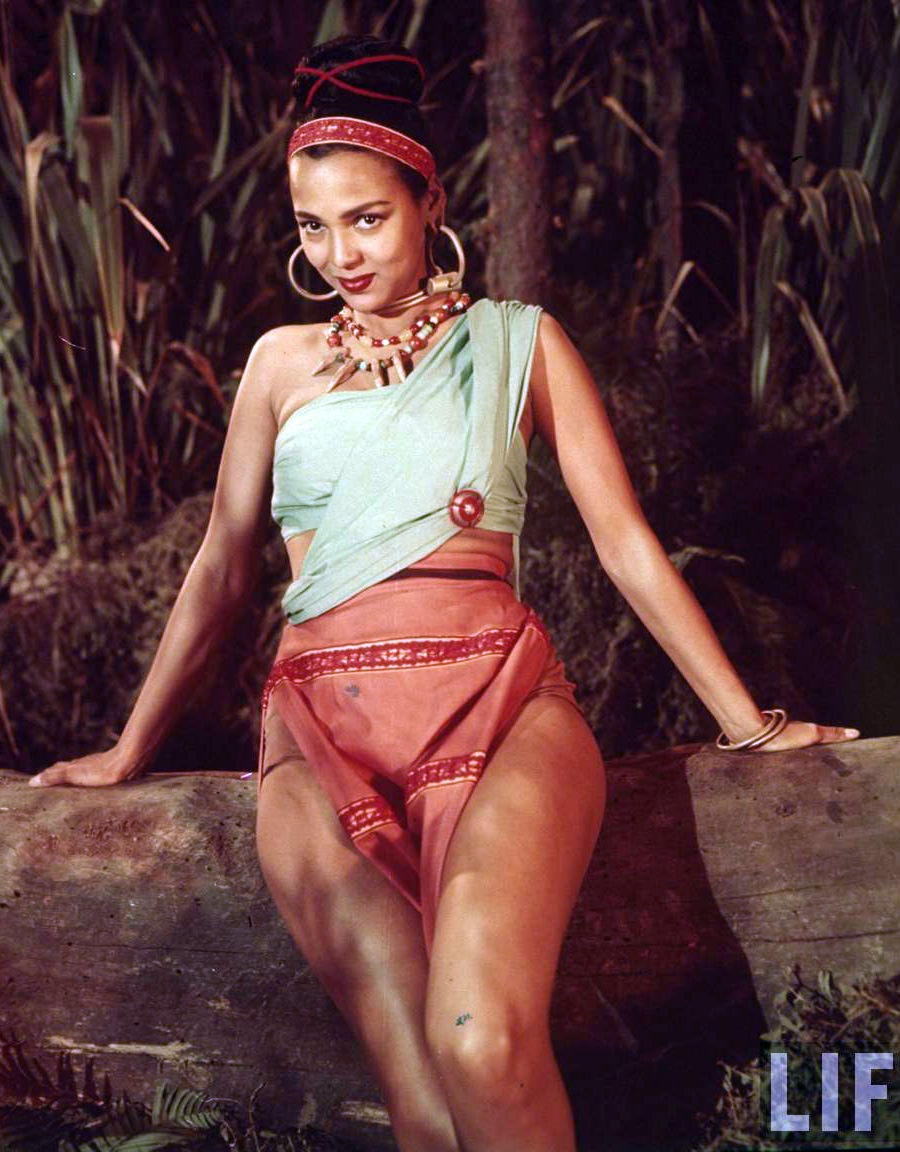 Saturday morning, 12:00pm (EST)
Right after two chapters of Ace Drummond (A pretty entertaining 1930s serial)
Dorothy Dandridge in her only genre role as Melmendi, Queen of the Ashuba.
The working title of this film was Tarzan's Mate in Peril.
It's an original story, not based on a Tarzan novel or short story.
The first Tarzan picture to have new footage featuring the cast shot in Africa, instead of Hollywood with Africa stock footage.
According to various Hollywood Reporter news items, exterior filming took place from July to September 1950 in Kenya (which was then British East Africa), including Meru National Park, as well as Uganda and Tanganyika.
After eight weeks of interior shooting at the RKO-Path Studios in Culver City, CA, the production finshed filming in Chapultepec Park in Mexico City.
Here's the trailer (in French)...

The shooting of one of the scenes in Tarzan's Peril

is featured in the bioflick Introducing Dorothy Dandridge 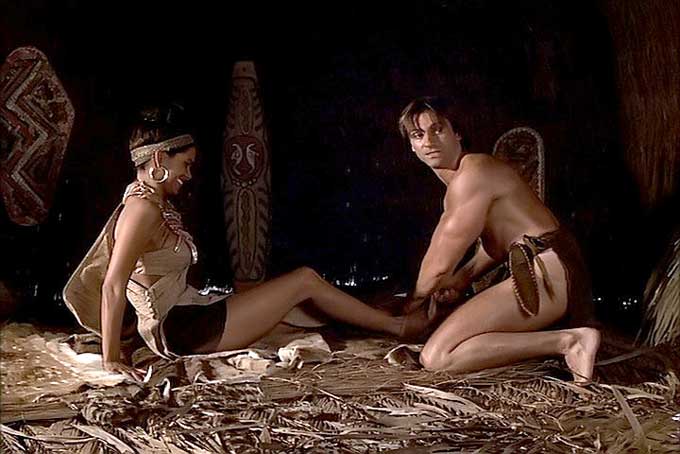 Reading Room: RACE FOR THE MOON "Thing on Sputnik 4"

As the Space Shuttle makes it's final journey... 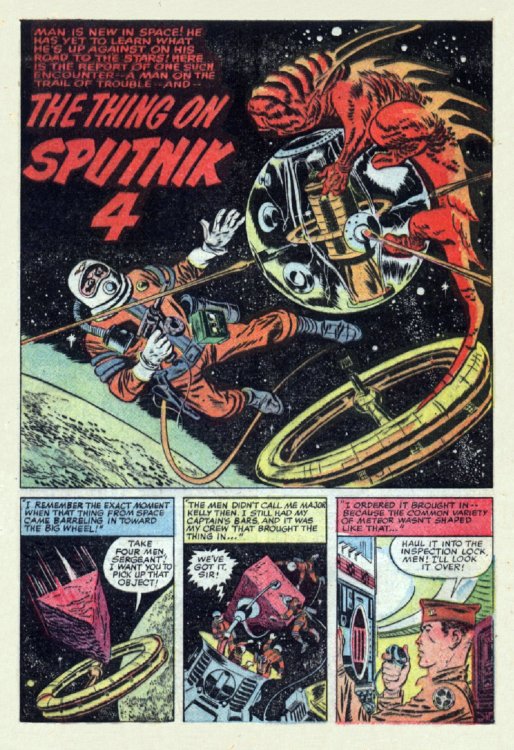 ...let's look at a tale created during early days of space travel, before Man had made it beyond the stratosphere, when we had NO idea of what awaited us "out there", but it was so kool to speculate... 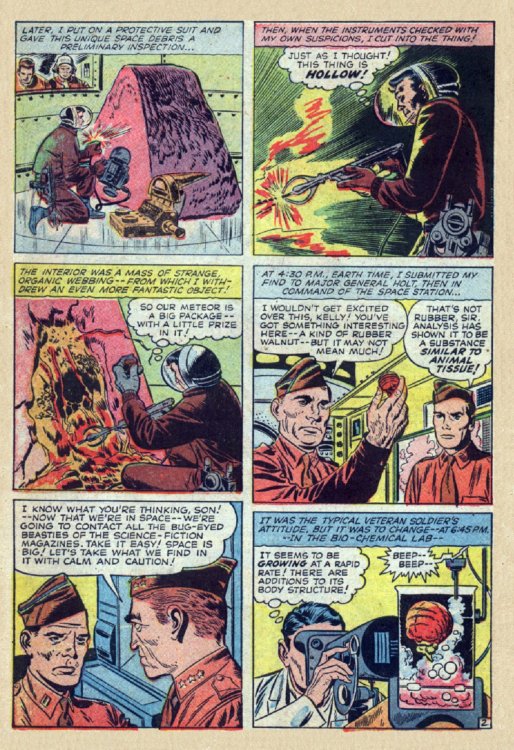 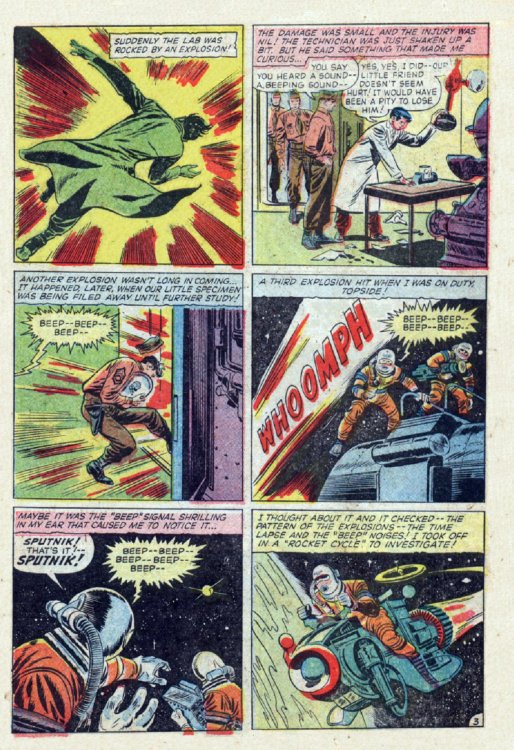 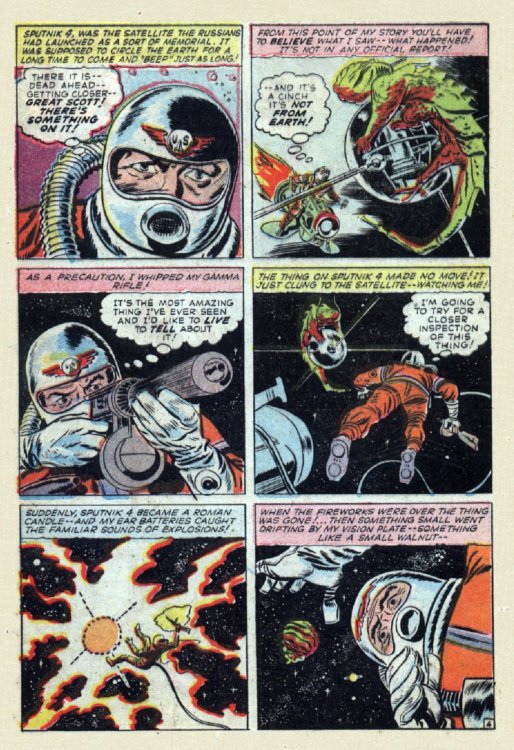 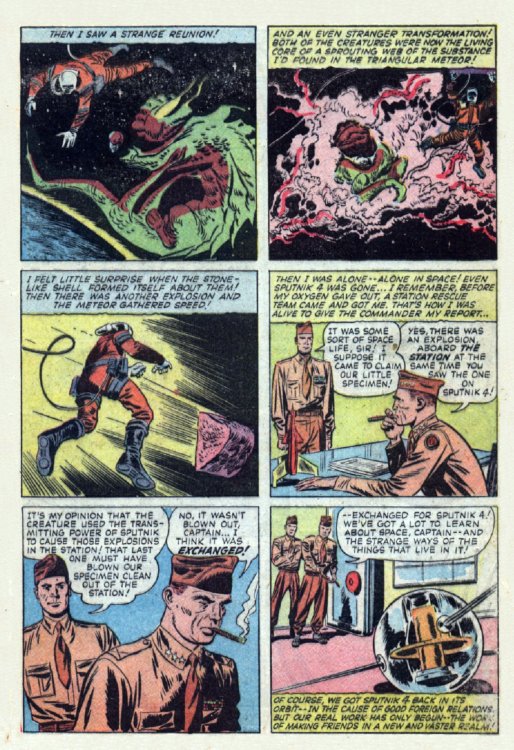 From Race for the Moon #2 (1958).
Beautifully-rendered by Jack Kirby and Marvin Stein.
It's both amazing and depressing to see what we hoped to achieve in the (then) near-future, and to then see what we actually did... 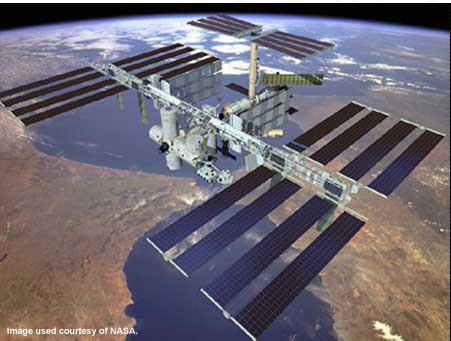 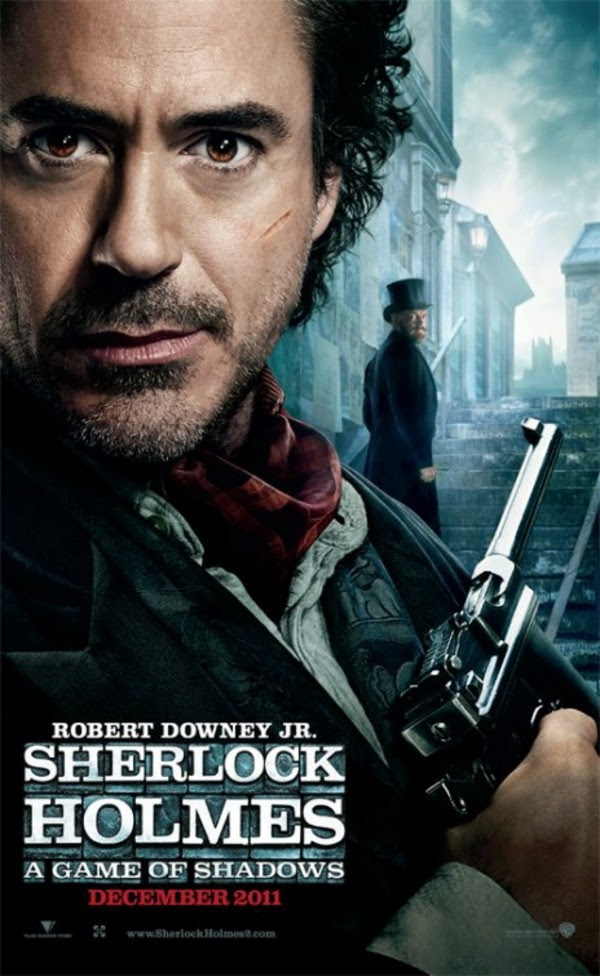 Here's the trailer for the upcoming flix with Jared Harris as Professor Moriarty.
Note the Mauser in Downey's hand. In 1896, this was THE state-of-the-art pistol.
Now a look at another Holmes and Moriarty...Basil Rathbone and Lionel Atwill!
Sherlock Holmes & the Secret Weapon
Peter Cushing's Sherlock...
Hound of the Baskervilles (1959)
Chistopher Plummer as Holmes vs Jack the Ripper...
Murder by Decree
Check out the

Even if you've never seen the show on BBC America or the dvd/blu-ray releases, the first episode of Miracle Day gives you enough background "on the fly" to follow with no problem, so don't be afraid to dive in! (Hey, it never stopped you from enjoying Star Wars or Star Trek, did it?) 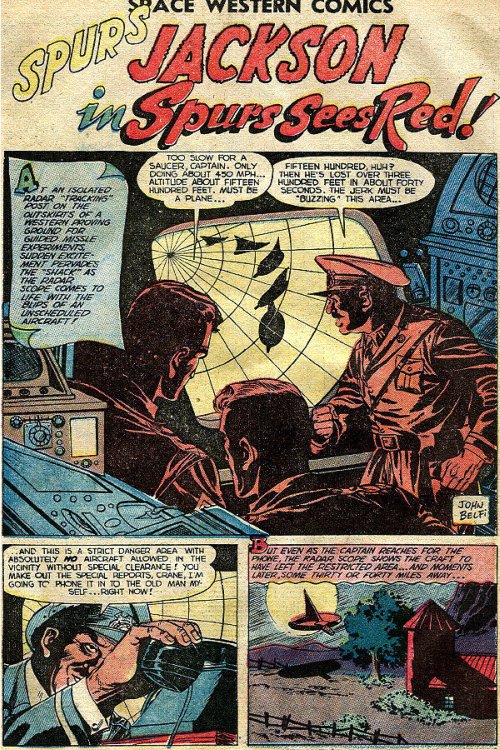 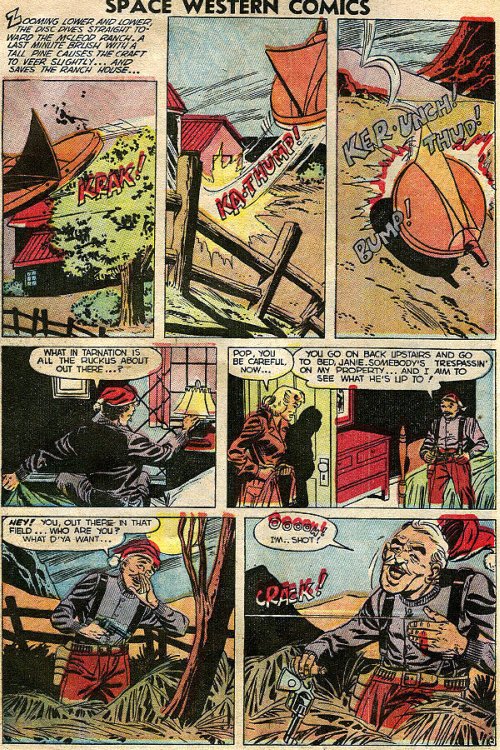 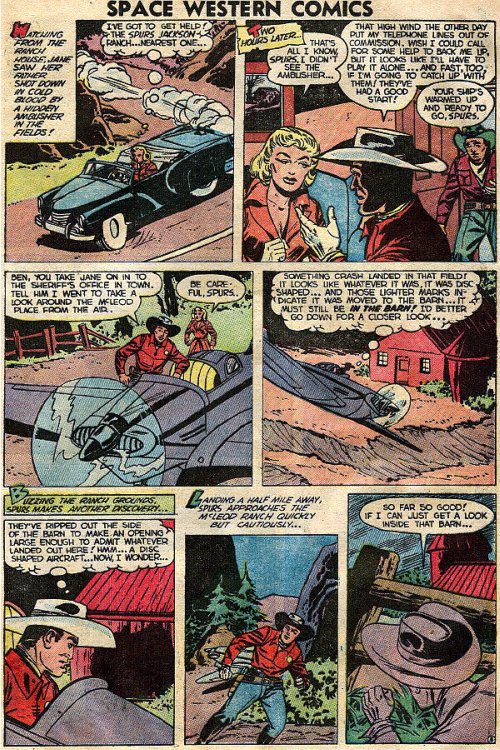 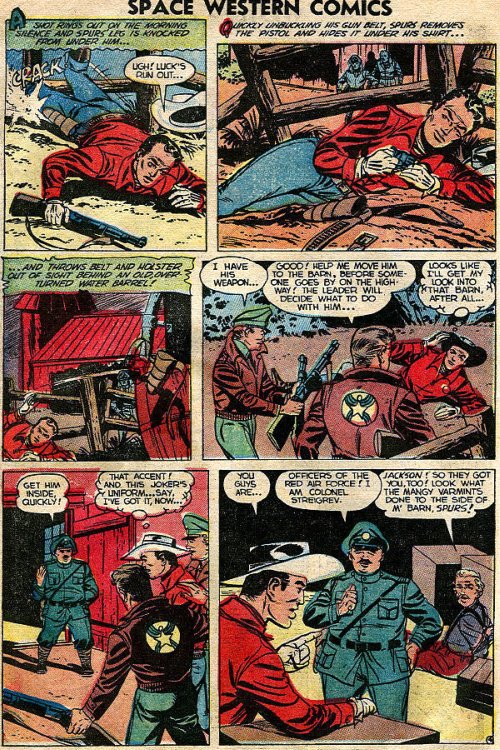 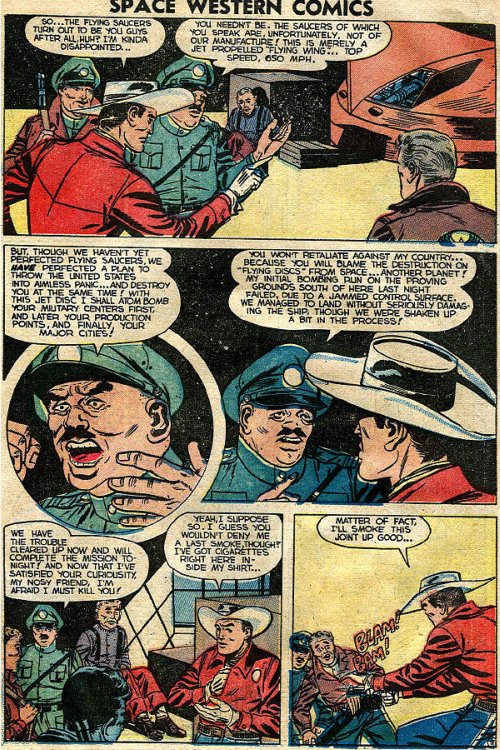 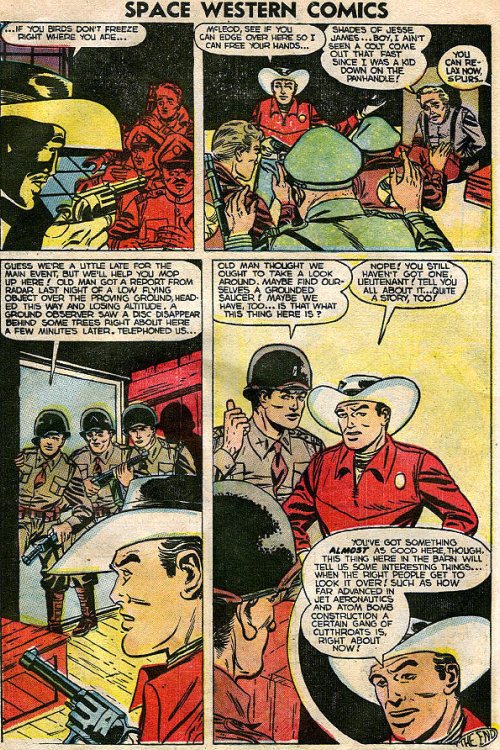 Sadly, the Reds haven't even salvaged a crashed alien ship and retro-engineered it's tech.
It's just a disguised Flying Wing, which both we and they were working on at the time.
(We were also working on our own flying saucers, but don't tell the Russkies!)
Art on this tale was by John Belfi.
There's more Space Western Comics fun to come!
We're offering a line of Space Western collectibles, perfect for summer wear at the beach, or the movie theatre when you go see Cowboys & Aliens. (C'mon, you know you're going!) 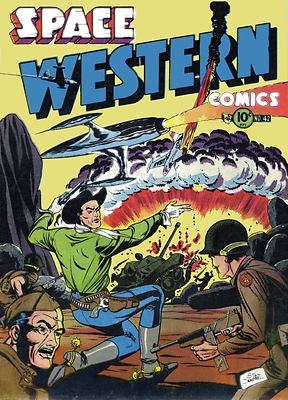 Comics Collectibles Store
and have a look below at some Cowboys and Aliens movie tie-ins from Amazon!
Posted by Britt Reid at 7/11/2011 09:09:00 AM No comments:

If you who want kool comic book-style fonts for your print or web projects, why not go to the font house used by DC, Marvel, Image and others?
It's their semi-annual half-price sale! (It's also held around New Year's Eve)
Click HERE for details!
Offer begins now and ends July 31, 2011. Sale prices calculated at checkout. Does not include Fontpacks or other discounted offers
Posted by Britt Reid at 7/10/2011 03:28:00 AM No comments: