"The name is Fleming, Ian Fleming..." 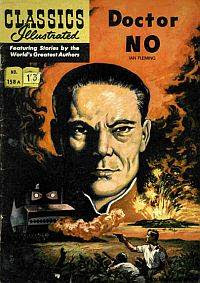 The man who created James Bond 007 would've turned 100 last week.
It's a major event in England, but here in the Colonies, it's just a side note to other pop culture news items.
We at Atomic Kommie Comics™ respect, nay, revere the man who gave us Bond, Goldfinger, Miss Moneypenny, Largo, Felix Leiter, Doctor No, Pussy Galore, and so many other memorable characters.
We've seen every adaptation, and most of the knockoffs (Israel Bond: Oy Oy Seven comes to mind) but nothing compares to the original Fleming novels (though of the follow-ups, I did like Amis' Colonel Sun, and I'm looking forward to reading Faulks' Devil May Care. And, truth to tell, I still get a kick out of The Book of Bond or Every Man His Own 007!)
No plug this time for our line of collectibles, but a look at the cover for the very hard-to-find original version of the comics adaptation of Doctor No, published first in England by Classics Illustrated and reprinted (in edited form) in the US by DC Comics as Showcase Comics #43. (So if you have Showcase, you don't have the original!)
We raise a Vesper to you, Mr. Fleming, in honor the many hours of pleasurable escapism you've provided.
Posted by Britt Reid at 6/05/2008 11:46:00 AM No comments: