An alternate cover preview for issue #5 of the best of the various new Green Hornet series now on the stands by artist and interior colorist Francesco Francavilla.
Posted by Britt Reid at 5/29/2010 02:00:00 PM No comments:

Design of the Week--"Godzilla" Redux 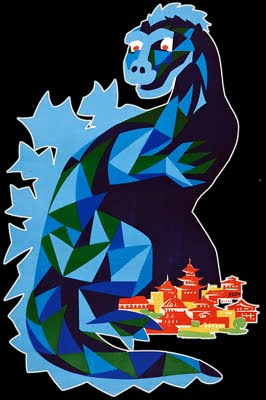 Each week, we post a limited-edition design, to be sold for exactly 7 days, then replaced with another!
This week, the return (by popular demand) of a kool Godzilla

-like (except he's blue and doesn't have atomic breath) reptilian monster, suitable for both kids and adults!
Will he protect the tiny town...or destroy it?
You decide!
Posted by Britt Reid at 5/28/2010 08:35:00 AM No comments:

Email ThisBlogThis!Share to TwitterShare to FacebookShare to Pinterest
Labels: daikaijū, Design of the Week, Godzilla, monster

Includes LOTS of Dr. Who in various incarnations from William Hartnell to David Tennant (but not Peter Cushing!), TorchWood, Sarah Jane Adventures, Robin Hood, Red Dwarf, Merlin, Primeval, My Hero (a kool superhero comedy), and the tv version of Hitchhiker's Guide to the Galaxy (not the awful movie)!
Plus comedy, drama, and the usual assortment of British goodies!
Posted by Britt Reid at 5/27/2010 10:23:00 AM No comments: 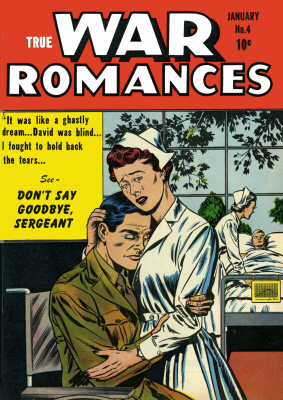 We at Atomic Kommie Comics™ know that the path of true love is not always smooth, especially in wartime.
In tribute to the brave men and women of the armed forces, we've created a new section featuring military-oriented romance comic books entitled WarTime Love™ just in time for Memorial Day featuring greeting cards, teddy bears, clothing and a host of other goodies with vintage retro military romance comic cover art.
Show your beloved, whether they're an officer, noncom, or GI Joe (or GI Jane), or the civilian waiting for you at home, that you're thinking of them on Memorial Day!
Posted by Britt Reid at 5/26/2010 11:49:00 AM No comments:

Only REAL Americans in Arizona! T-Shirt

Well, if you take the argument to it's logical extreme, Native Americans / Amerinds were here first...EVERYBODY else was an "illegal alien"!

If you're interested in making a political / socio-economic statement with this shirt, click HERE!
(It's American Apparel! Non-sweatshop-produced!)

For the record, I'm not for any sort of amnesty for undocumented aliens.
I believe they should be registered and go thru the same legal procedures and schooling / testing as any other immigrant wanting to become a US citizen.
No shortcuts, no special privileges.
My grandparents did it by the book (including learning English, though none of them were native English speakers), and I believe anyone else who wants "in" has to do the same!

Well, I was fine with it for the first 2 1/4 hours...
Didn't they say it wasn't Purgatory?
Apparently, they're saying the Island itself (and it's timeline including flashbacks and flashforwards) wasn't Purgatory, just the "flash-sideways" alternate universe!

But that, in and of itself, opens up a number of questions...
The only "real" people in the flash-sideways universe were the ones assembled in the church?
Why was Claire's child, Aaron, still a baby? He was shown as 3-4 before Kate turned him over to his maternal grandmother in the "real world". Did the grandmother kill him? (We didn't see Sun & Jin's child, Ji Yeon, indicating she was still alive.)
Where was the now-mortal Richard Alpert?
Who replaced Hurley as the Protector of the Island? (Ben Linus would've been the obvious choice)
Why did everyone look the same age as their last appearences together on the Island in the main timeline? Since some died after (perhaps long after) Jack died, wouldn't they look like they would at the time of their passing?

will have an additional 20 minutes cut from the series finale that'll, hopefully, explain more...

Not since the end of the "reimagined" BattleStar Galactica

have I been so disappointed...came to love the series (big fan of the original 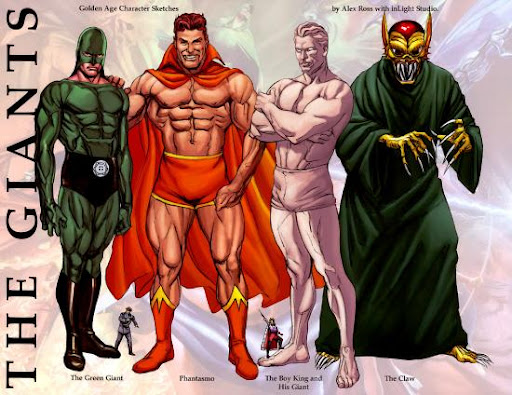 In addition, you can find Atomic Kommie Comics™ kool kollectibles emblazoned with the ORIGINAL 1940s classic cover art featuring these really BIG characters...
both
Green Giant
and
Phantasmo
(in Solo Heroes)
Boy King's Giant
and
The Claw
at
Lost Heroes of the Golden Age of Comics™!

And don't forget to buy the Project SuperPowers

comics and collections including Black Terror