Halloween by a Master of the Graphic Arts!

A magnificent cover by the late, great Dave Stevens to celebrate the season!
I'm going to go party hearty, so I'll see you tomorrow!
HAPPY HALLOWEEN!
Posted by Britt Reid at 10/31/2015 06:30:00 PM No comments:

Most readers of this blog are familiar with Dr. Fredric Wertham

and his notorious book Seduction of the Innocent

, which basically attributed 1950s juvenile delinquency to the reading of comic books, specifically horror comics!
But, did you know that Great Britain had a similar cultural phenomenon, known as The Gorbals Vampire, also blaming American horror comics?

Bleeding Cool, a site of such importance to all comics fanboys and fangirls (yes, that includes us) that it should be one of your PRIMARY bookmarks, has posted info on a new BBC documentary about this infamous (and little-known) period of British history!

No, it's not a tale of a transvestite Transylvanian, but a humerous look at the original "bat man"... 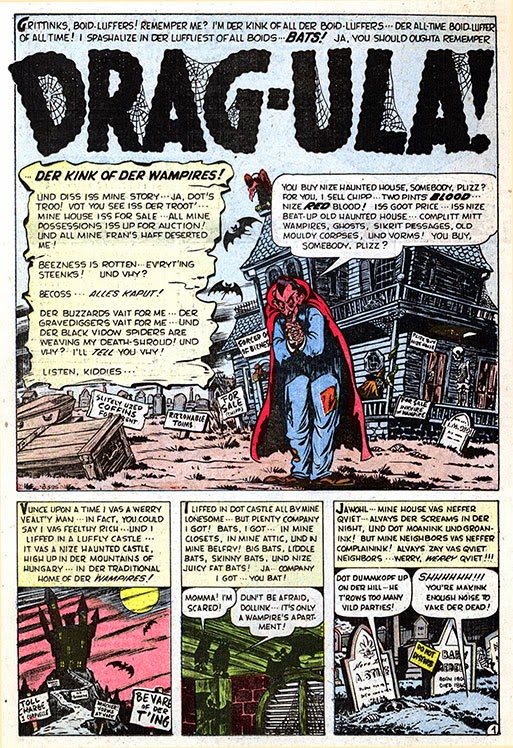 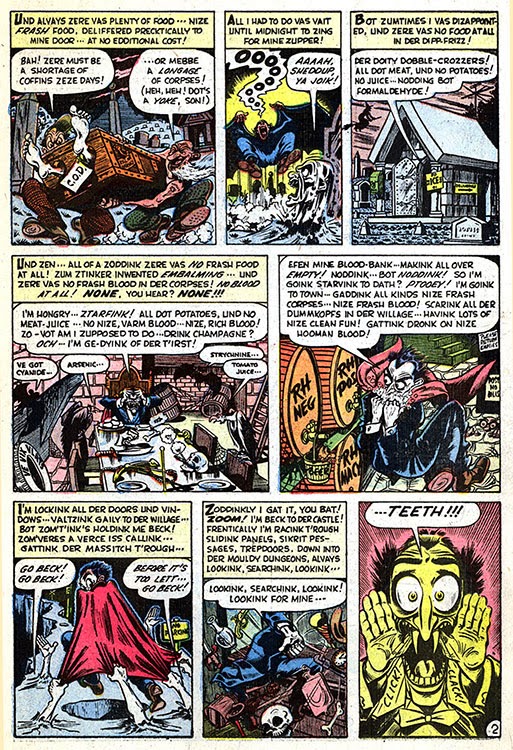 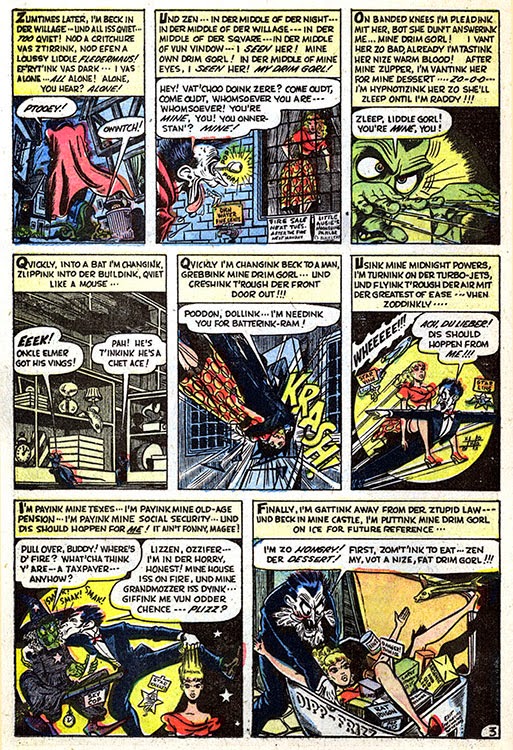 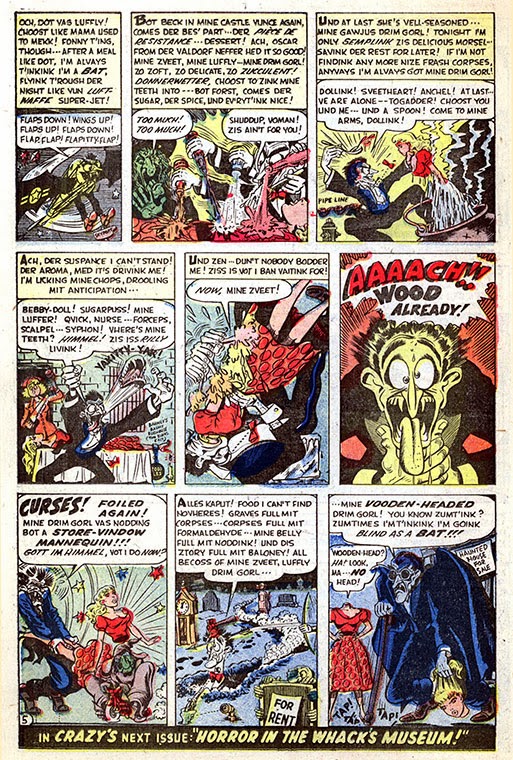 As was usual with the lead tale in CRAZY, it's lovingly-rendered by the amazing Bill Everett!
Heck, Bill might even have written it, since he had a number of scripting credits already!
Posted by Britt Reid at 10/29/2015 04:03:00 PM No comments:

For the remainder of the Halloween season, we're gonna tickle your funny bone... 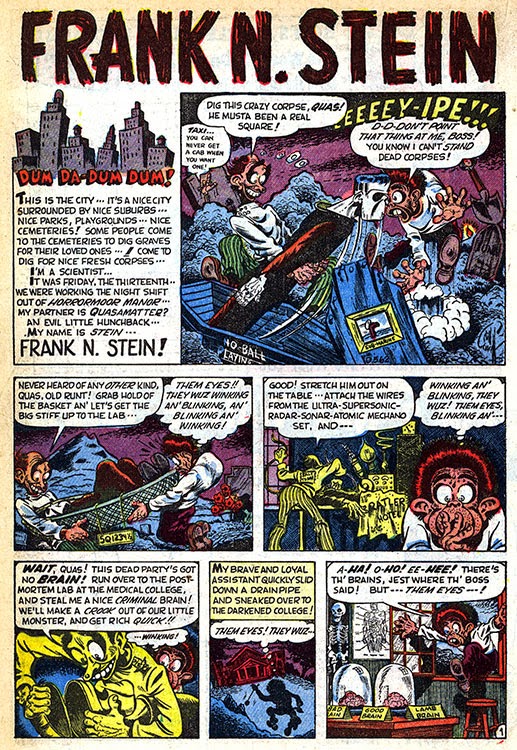 ...with a bunch of rarely (if ever) reprinted horror-themed humor strips from the 1950s! 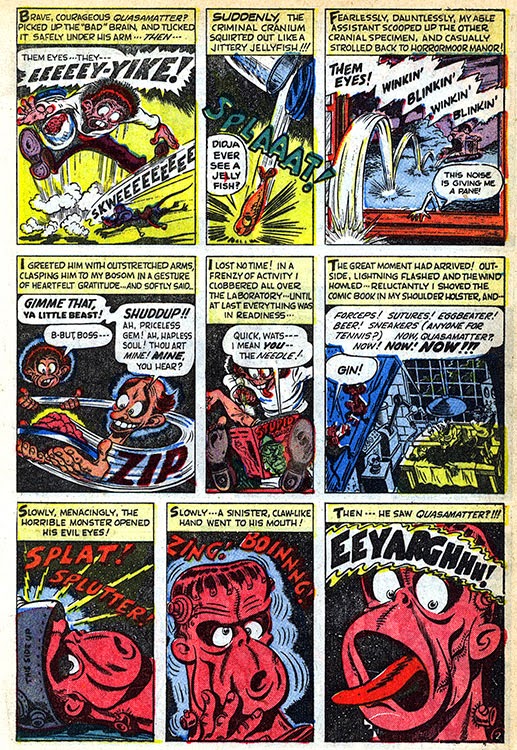 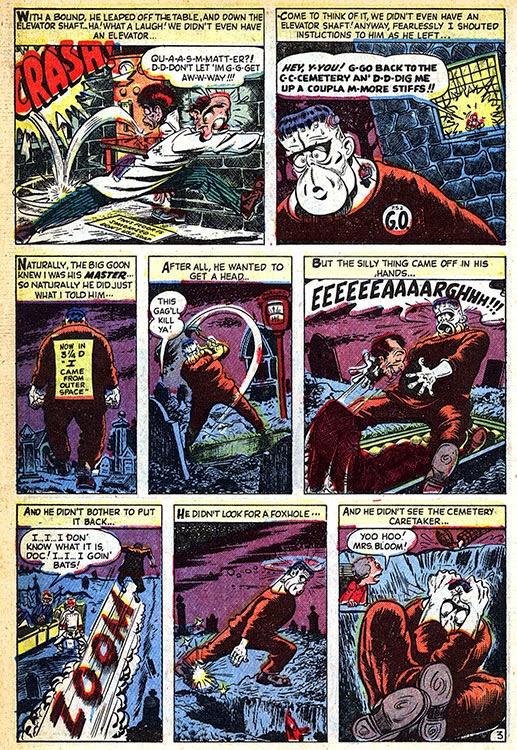 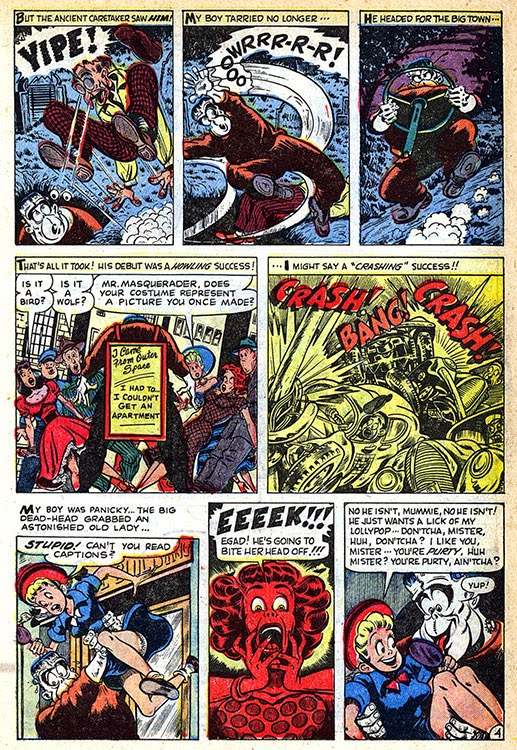 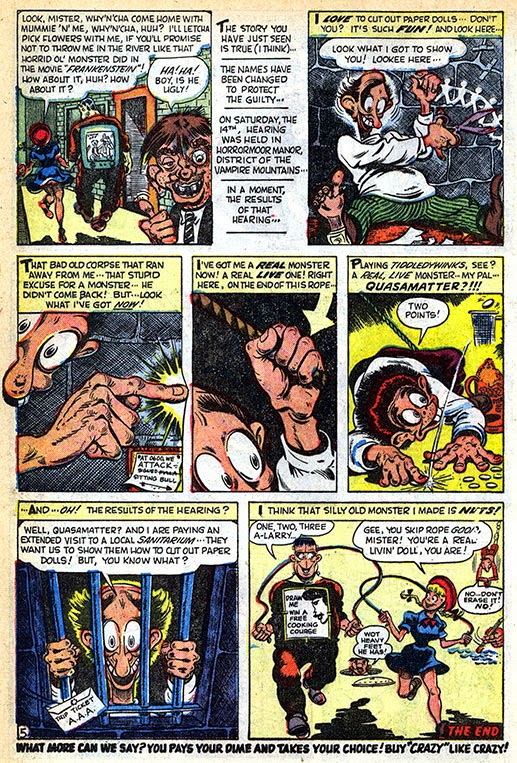 If imitation is "the sincerest form of flattery", then Atlas Comics was easily the most sincere company in the business with no less than four MAD / PANIC imitations; Crazy, Riot, Snafu, and Wild between 1953 and 1956!
Besides humor specialists like Dan DeCarlo, the sheer volume of Atlas humor titles gave the opportunity for artists who usually did Westerns or horror or sci-fi to expand their range, like this tale illustrated (and possibly written) by veteran Bill Everett, who proved more than up to the task with this spoof from Crazy V1 N1 (1953).
Note: Marvel's reincarnated the title several times including a long-run b/w magazine in the 70s-80s.
Posted by Britt Reid at 10/28/2015 11:58:00 AM No comments:

Reading Room REX HAVOC "Spud from Another World! or Who Grows There?" Conclusion ...a research base in the Arctic is under siege by an alien who had been trapped in the ice for millennia, but was accidentally-defrosted by the military.
In the ensuing battle, the alien escaped, but left behind a severed arm, which the scientists analyze... 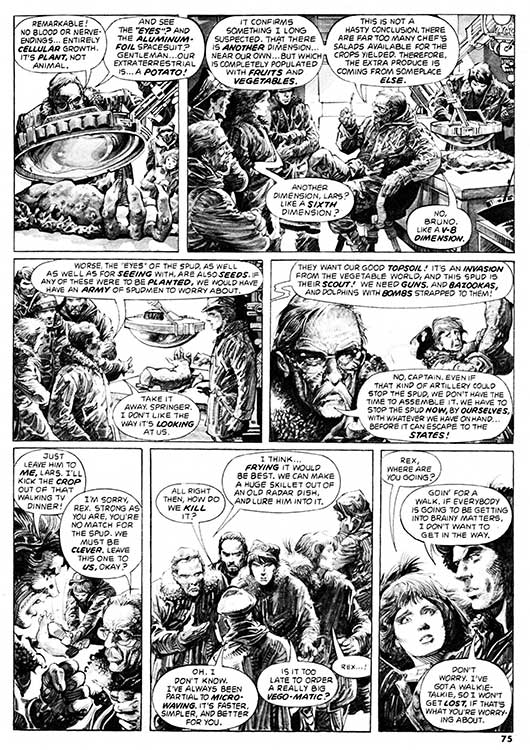 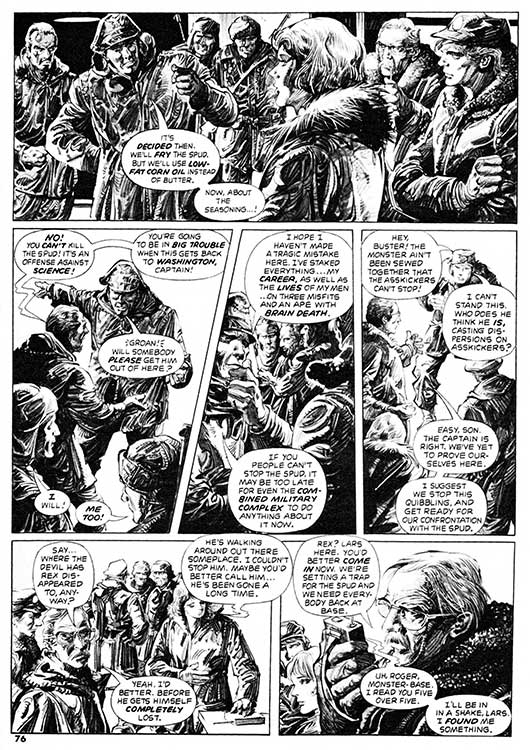 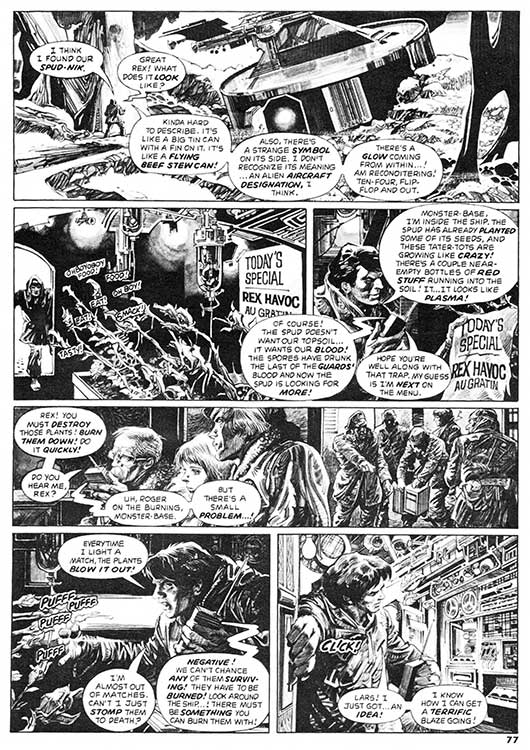 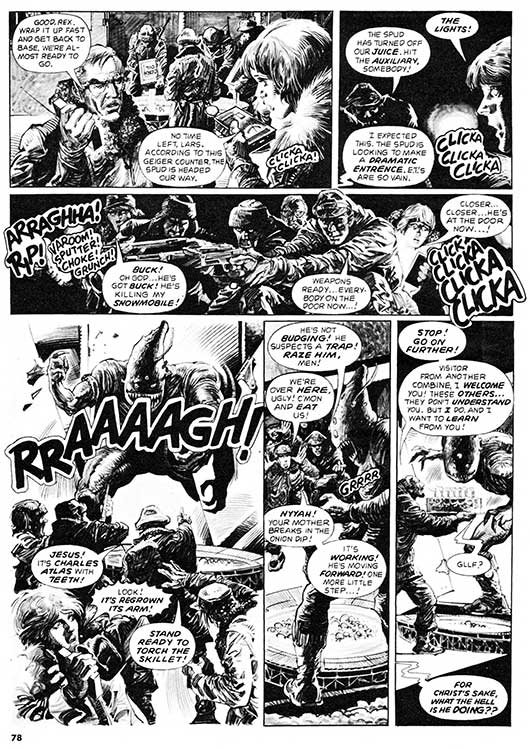 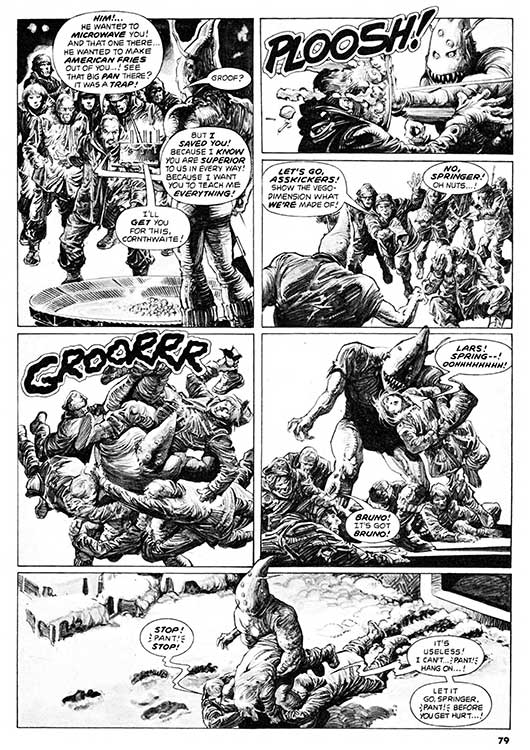 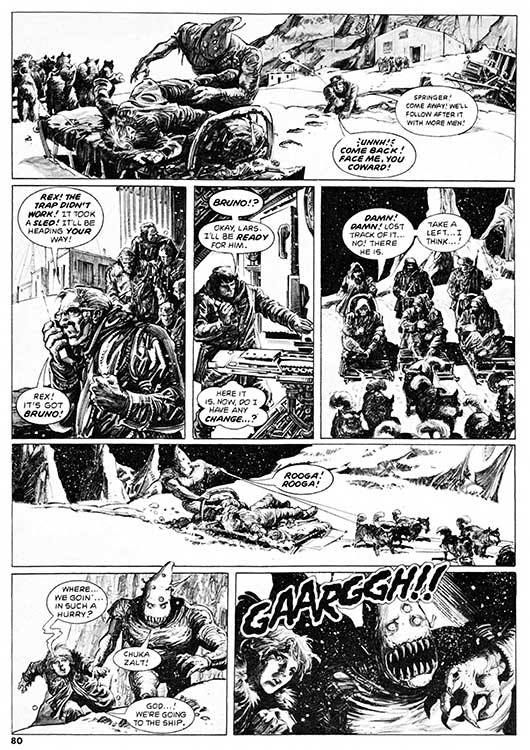 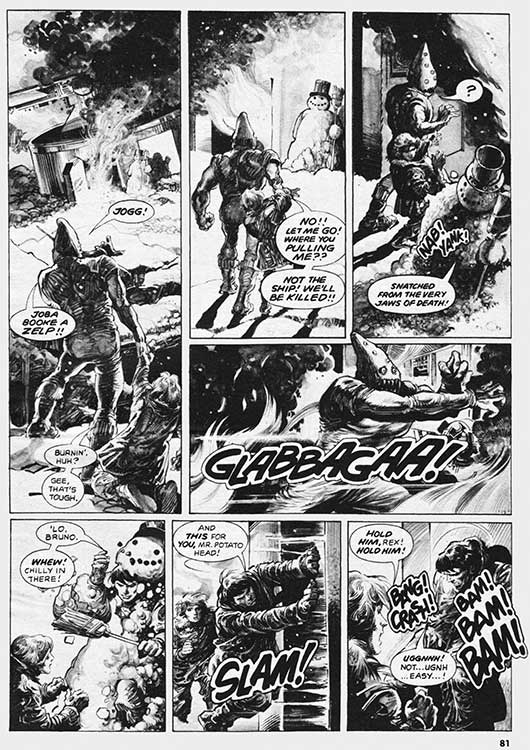 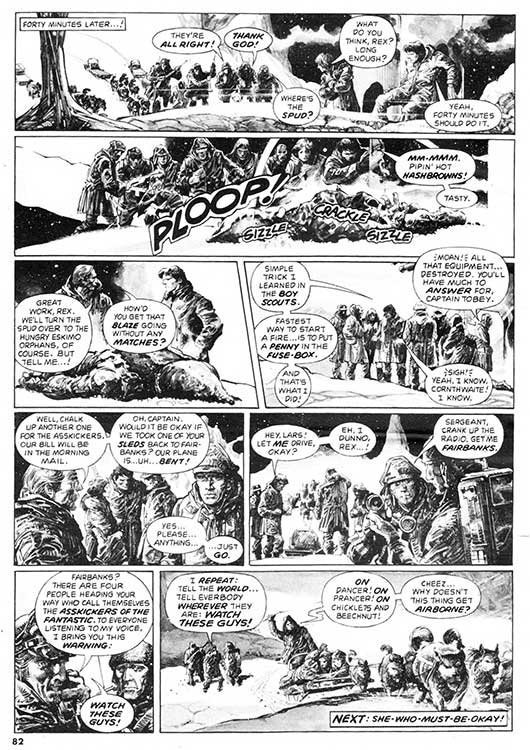 Rex's second tale from Warren's 1984 #5 (1978) takes the classic 1950s movie Thing from Another World, adds a couple of elements from the extremely-different John Campbell short story "Who Goes There?" it was based upon, adds a healthy dose of snark, shakes well, and produces this entertaining spoof.
Note: the suppporting characters are given the names of the actors' who played their counterparts in the original film.
For example, the base commander, named "Hendry" in the movie, is "Tobey" here.
Kenneth Tobey played Hendry in the movie.
Oddly, when Warren published a Rex Havoc one-shot a couple of years later, this tale was the only Rex Havoc tale not included!
Posted by Britt Reid at 10/27/2015 08:05:00 PM No comments:

Join the Victorian monster hunter with the 1970s style in his final adventure... 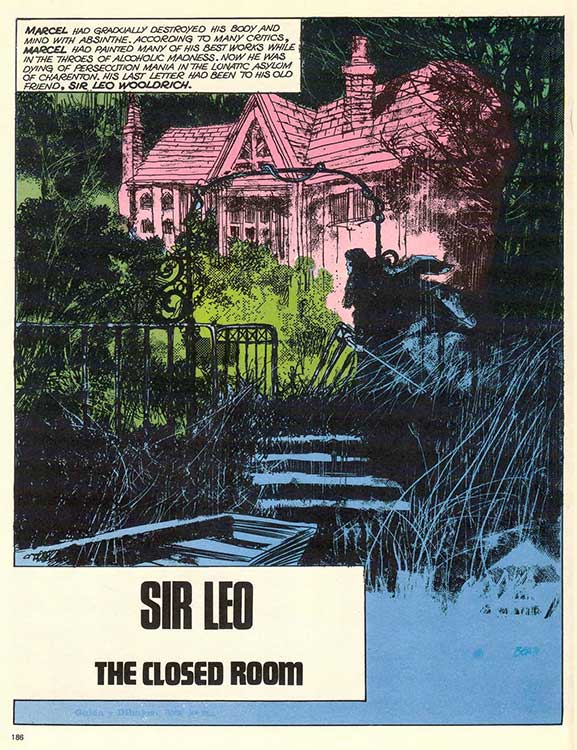 ...unseen, until now, by American readers! 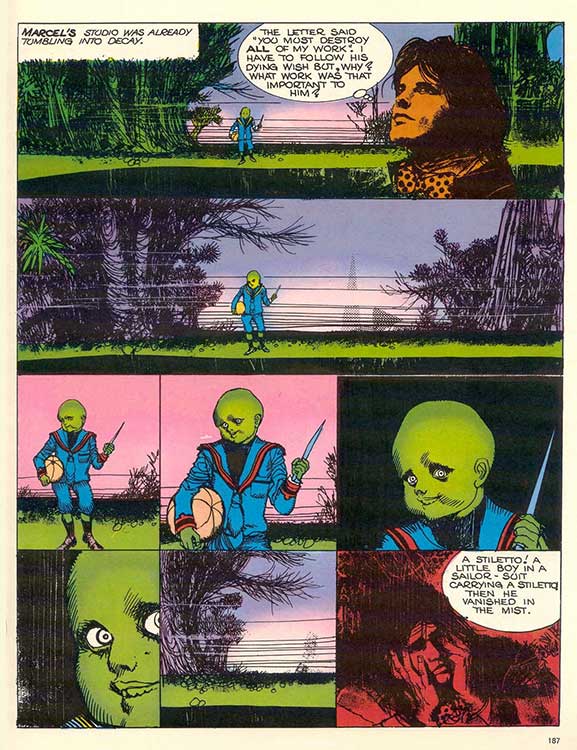 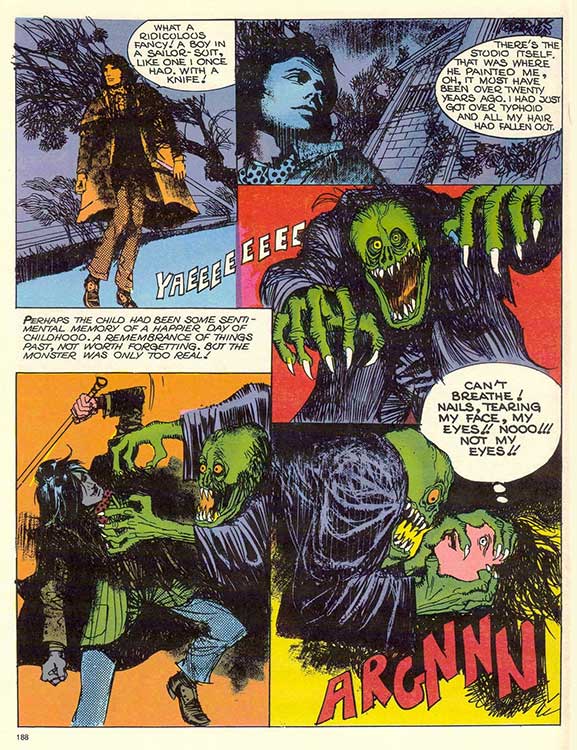 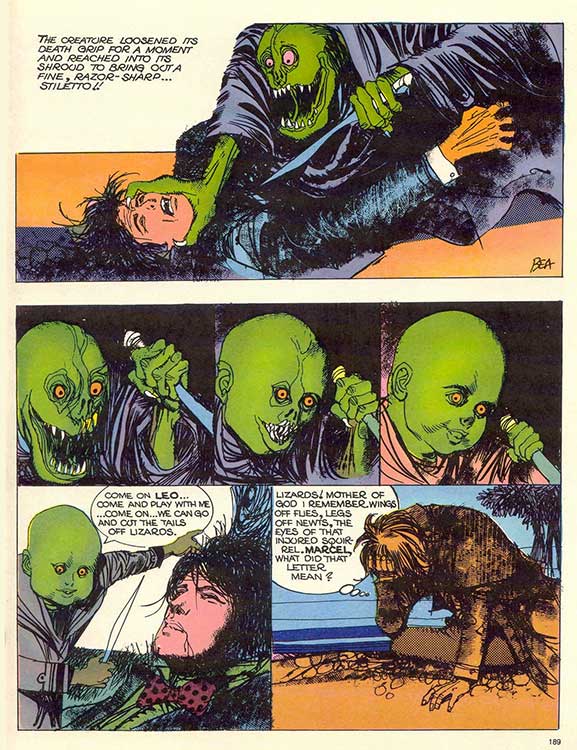 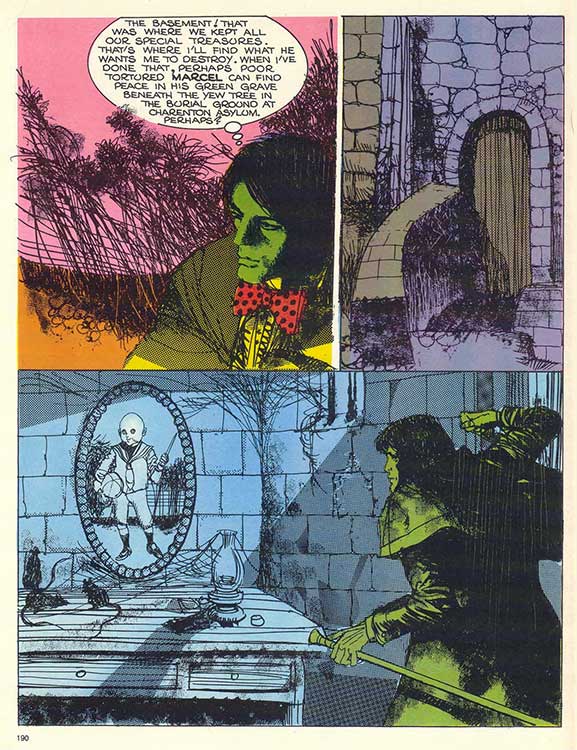 How will Sit Leo deal with the demon/creature of the id ?
Destroying the image seems to be the obvious solution, but if Sir Leo destroys it, will Marcel, locked up in an insane asylum die as well?
Guess we'll never know.
Written and illustrated by Jose Bea and co-written by Luis Vigil, this tale from from Dracula #10 (1971) ends the series on a characterisic nebulous note.
Tomorrow, the return of Rex Havoc...
Posted by Britt Reid at 10/26/2015 01:07:00 PM No comments: 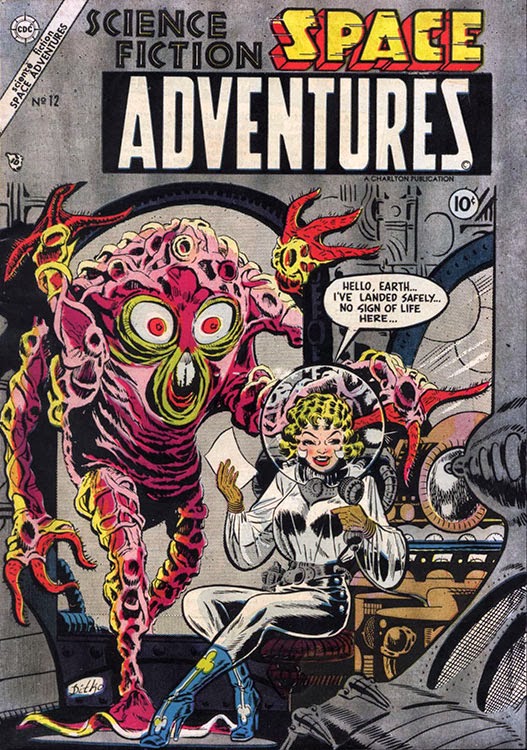 Even though it has nothing to do with any of the stories inside Charlton's Space Adventures #12 (1954), it's one of the most famous and most reprinted covers Steve Ditko ever did (excluding Amazing Spider-Man and Amazing Fantasy #15, of course)!
Posted by Britt Reid at 10/25/2015 09:23:00 AM No comments: