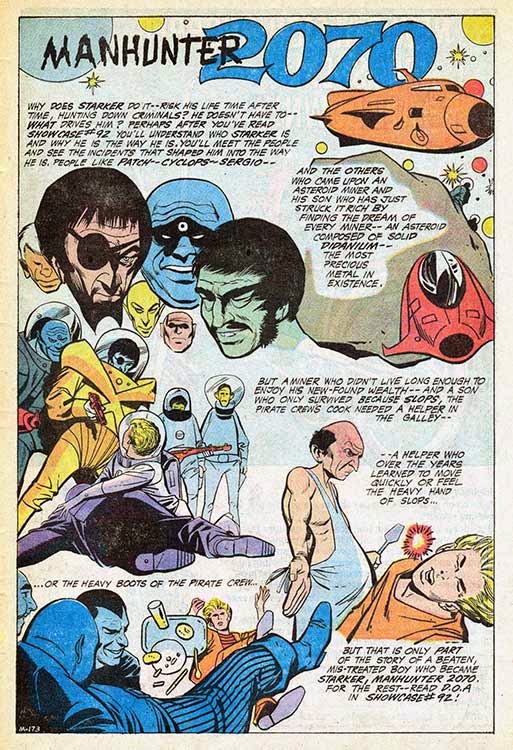 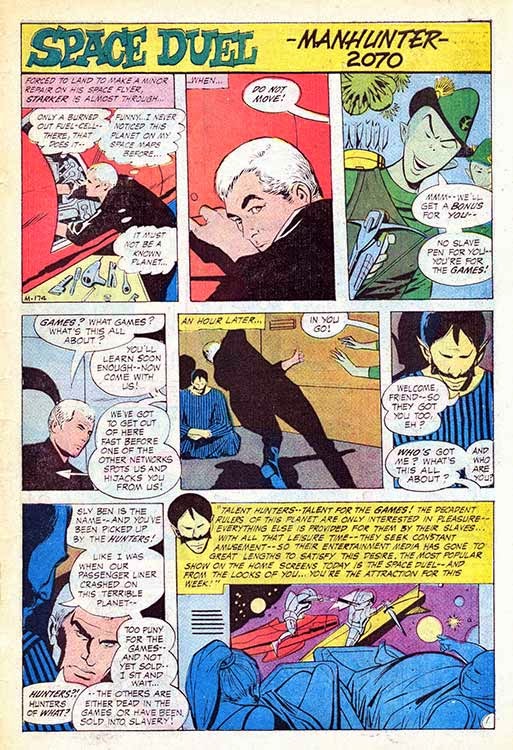 In 1970, a visionary writer/artist/editor saw it happening, but a century later (which is only 55 years for us)! 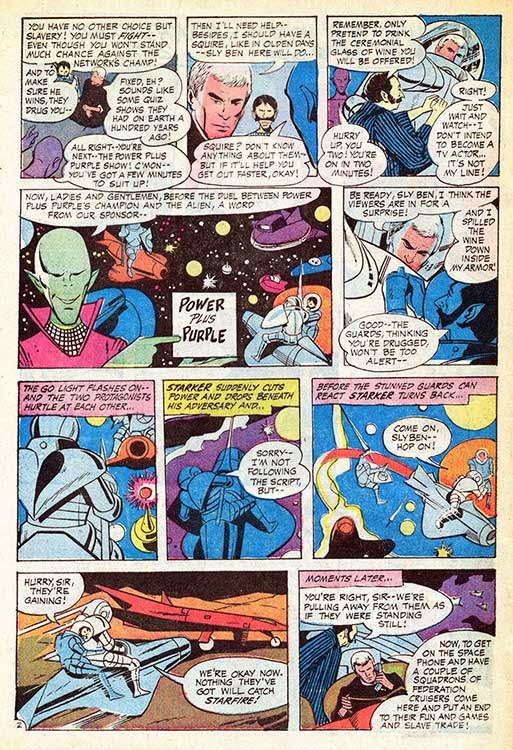 Sly Ben, sadly, didn't appear again.
Too bad as he would've added a bit of comic relief to a rather grim series.
This "tag", written and penciled by Mike Sekowsky and inked by Vince Colletta, appeared in the back of DC's Showcase V1N91(1970).
Like the short that appeared at the end of the previous issue, it didn't "tease" what would be in the next issue, but served to expand the world of 2070 for the readers, establishing story elements that Sekowsky could come back to in future tales.
In fact, there was a "teaser" at the end of the book, and you'll see it tomorrow...
Posted by Britt Reid at 3/13/2015 11:57:00 PM No comments: 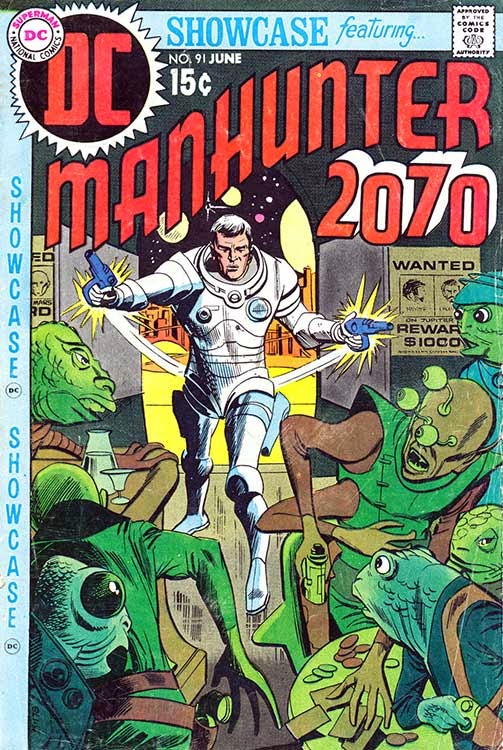 ...commissioned to bring in a trio of space pirates, bounty hunter Starker tracked them to Pheidos, a world where practically everything, plant or animal, is trying to eat everything else, making it the perfect hideout world!
With one of the criminals devoured by carnivorous insects, Starker continues his assignment... 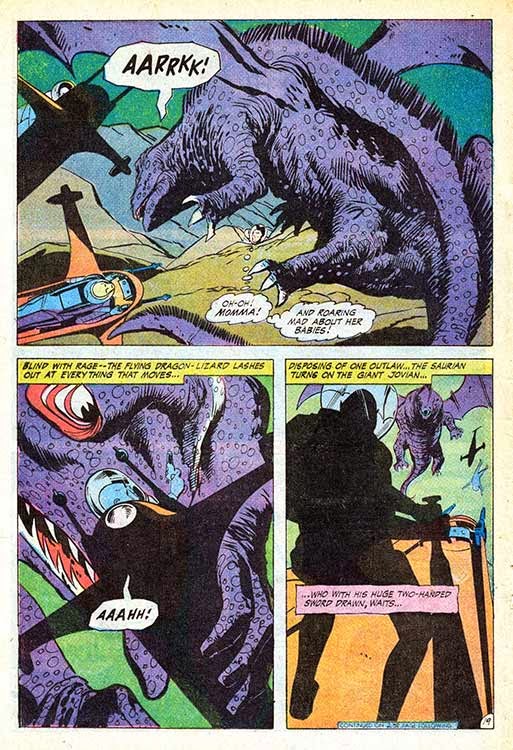 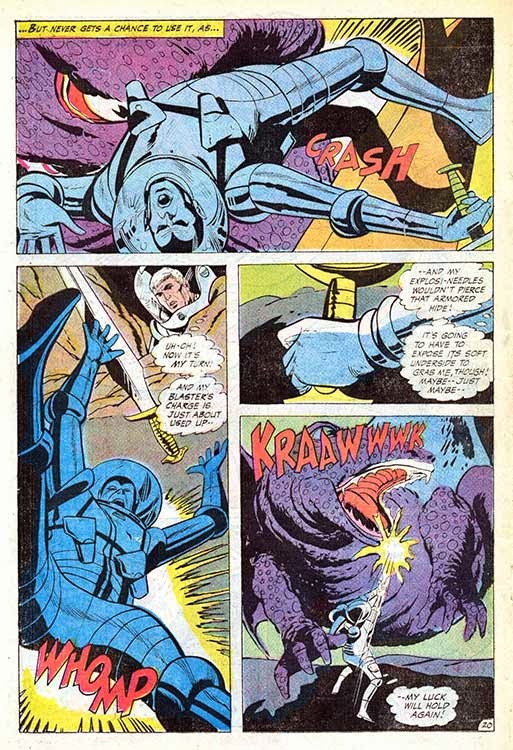 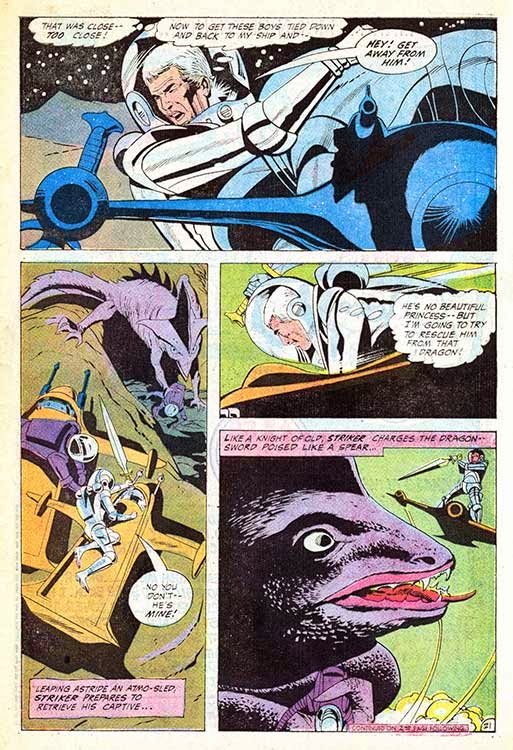 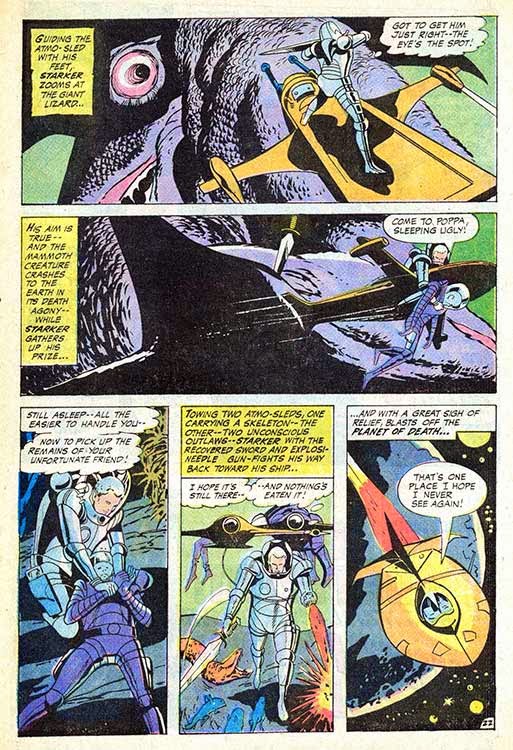 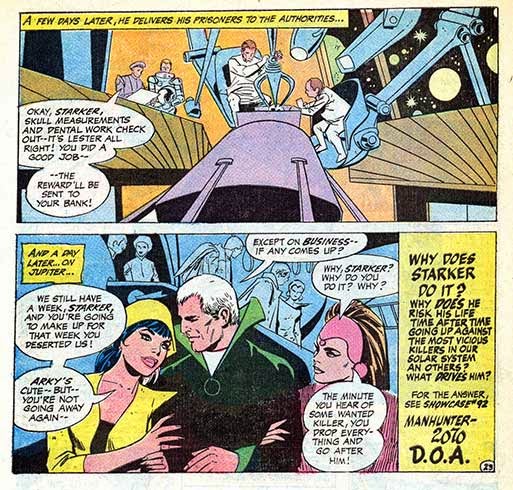 But before that, we have another brief interlude as Starker ends up on a reality TV show!
TOMORROW!
Yeah, I know this series was written in 1970.
Maybe Mike Sekowsky was more prescient than we thought...
Written and pencilled by Mike Sekowsky, inked by Vince Colletta, this never-reprinted tale from DC's Showcase V1#91 (1970) proves the adage that "space opera" is "horse opera" with blasters instead of six-shooters.
Posted by Britt Reid at 3/12/2015 10:53:00 AM No comments:

When Last We Left Our InterGalactic Bounty Hunter... 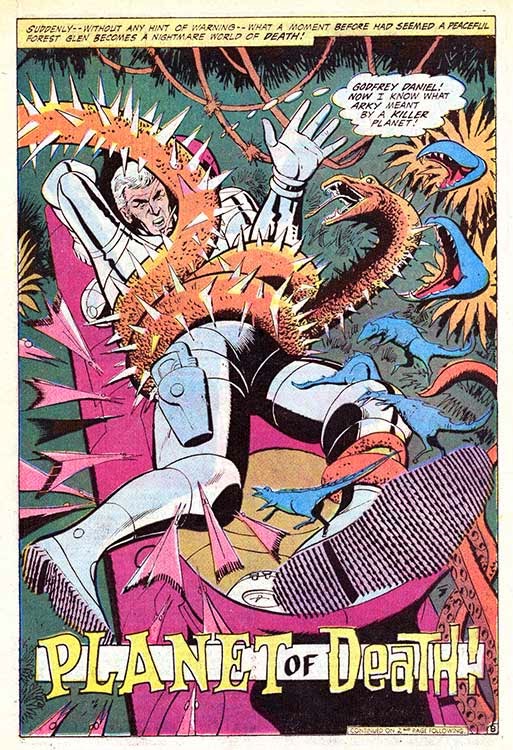 ...which is why the outlaws he's been hunting considered it to be the perfect hideout! 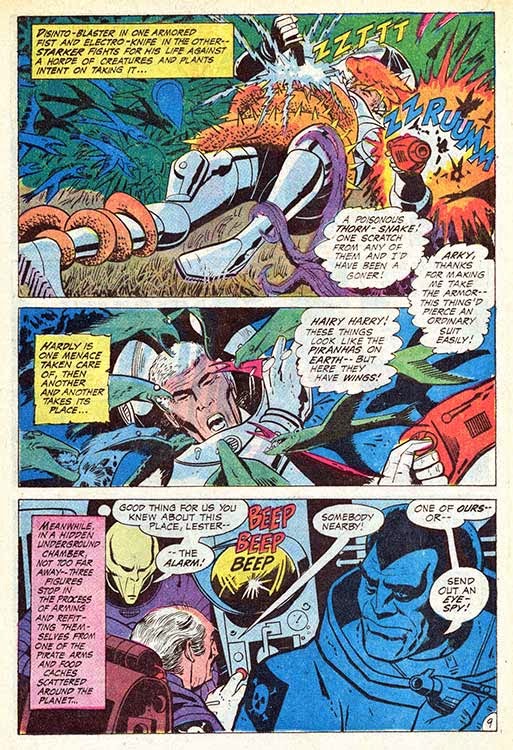 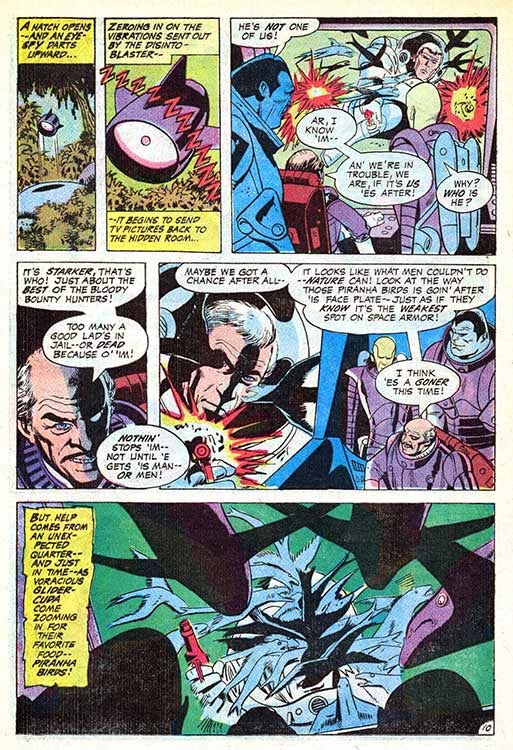 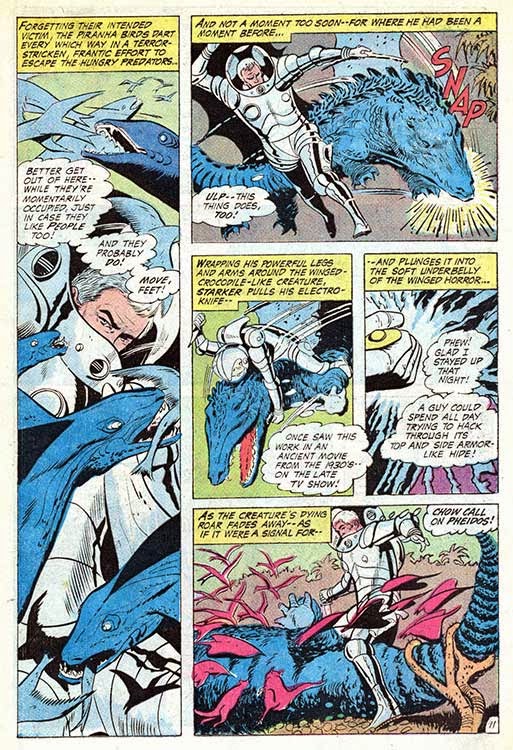 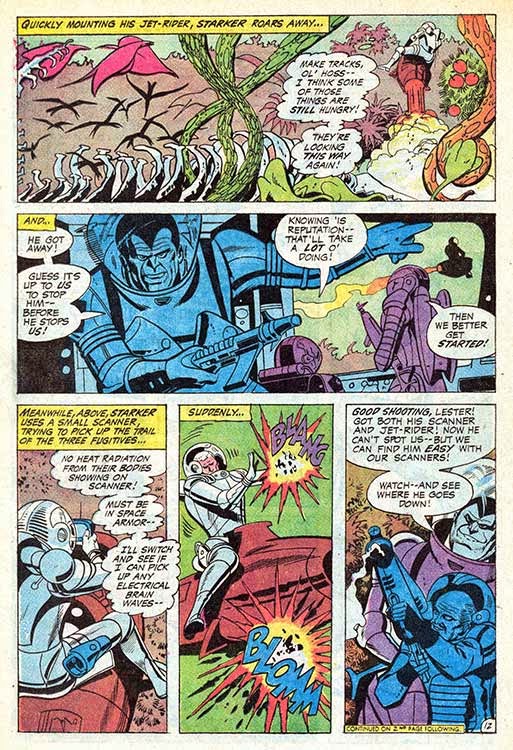 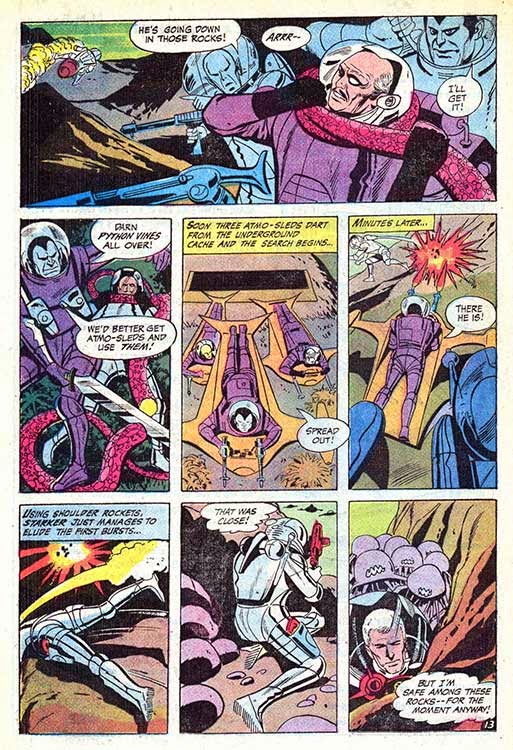 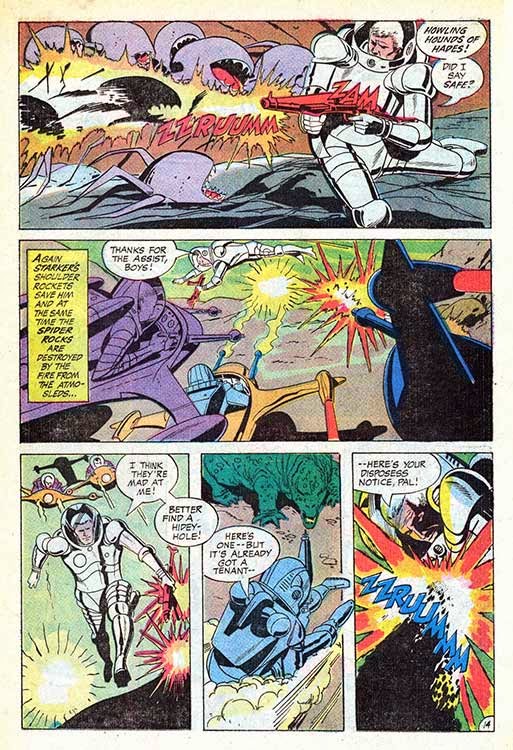 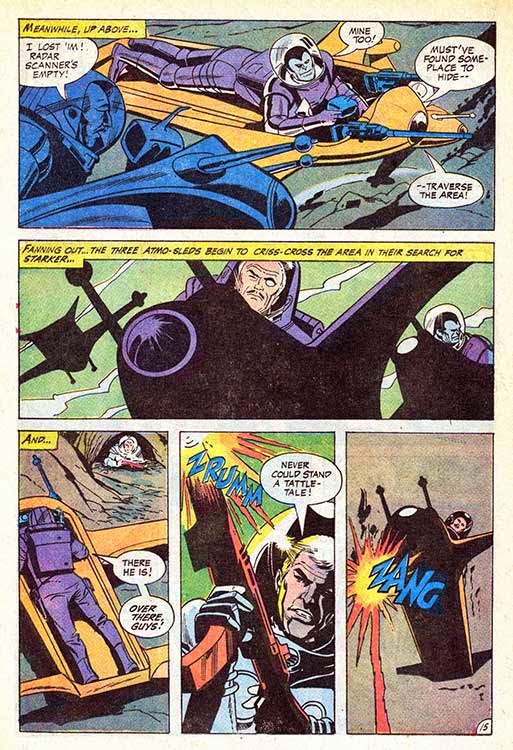 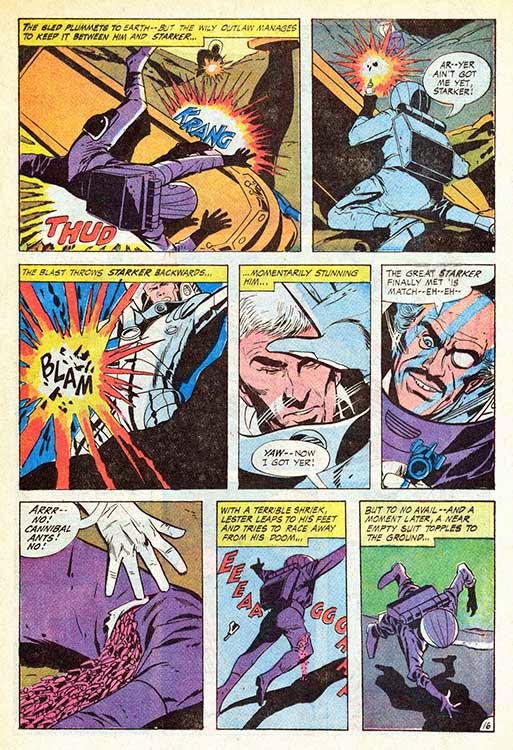 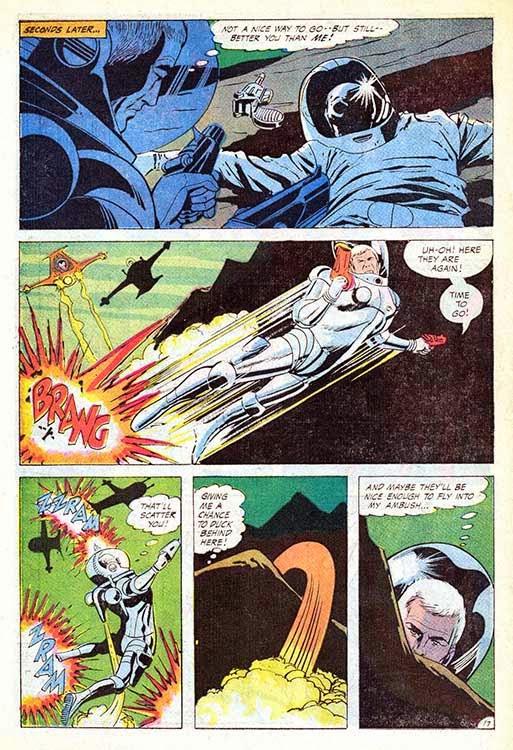 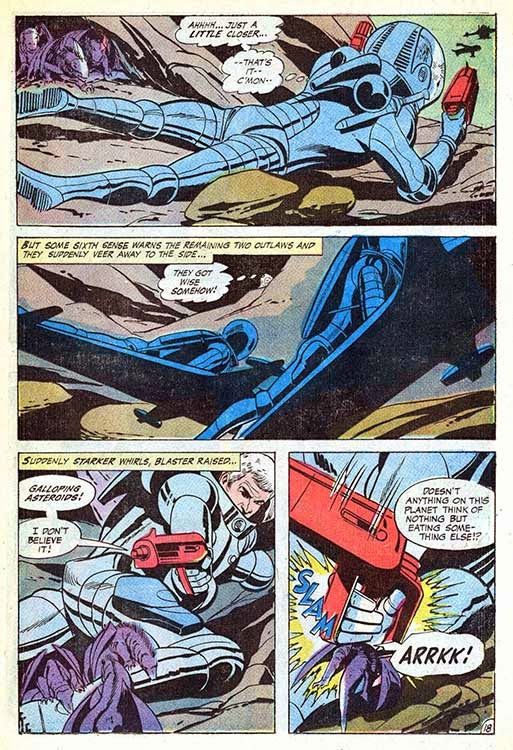 ...wait until Starker sees who (or what) else is among the potential diners...
TOMORROW!
Written and pencilled by Mike Sekowsky, inked by Vince Colletta, this never-reprinted tale from DC's Showcase V1#91 (1970) proves the adage that "space opera" is "horse opera" with blasters instead of six-shooters.
Sekowsky was no stranger to space opera, having illustrated Speed Carter: SpaceMan for Atlas (later Marvel) in the 1950s as seen HERE, HERE, and HERE, as well as Harvey's 3 Rocketeers in the 1960s as seen HERE and HERE!
Posted by Britt Reid at 3/11/2015 01:01:00 AM No comments:

Yesterday we presented a teaser for this long-lost series... 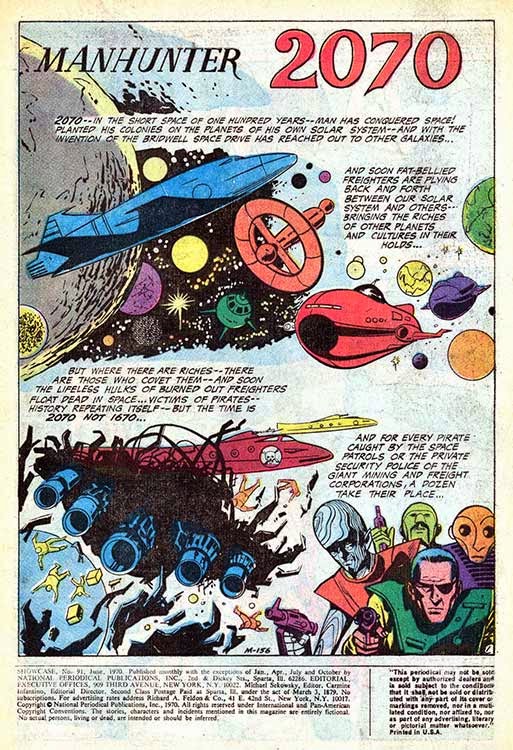 ...today we jump feet-first into the world a mere 55 years hence... 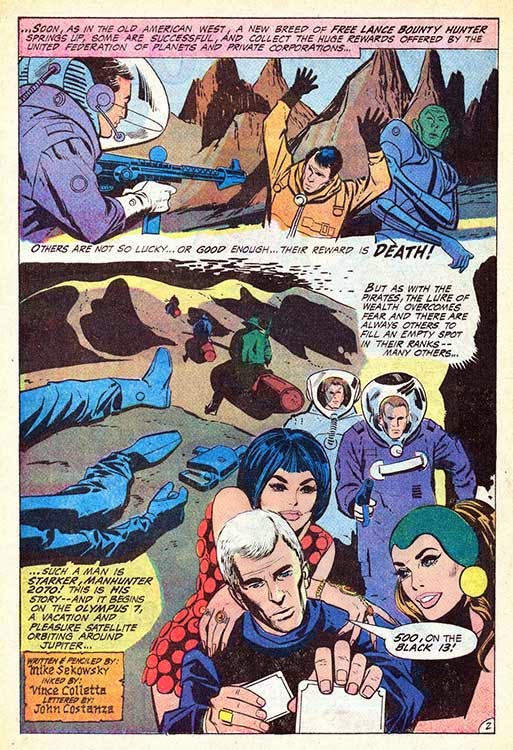 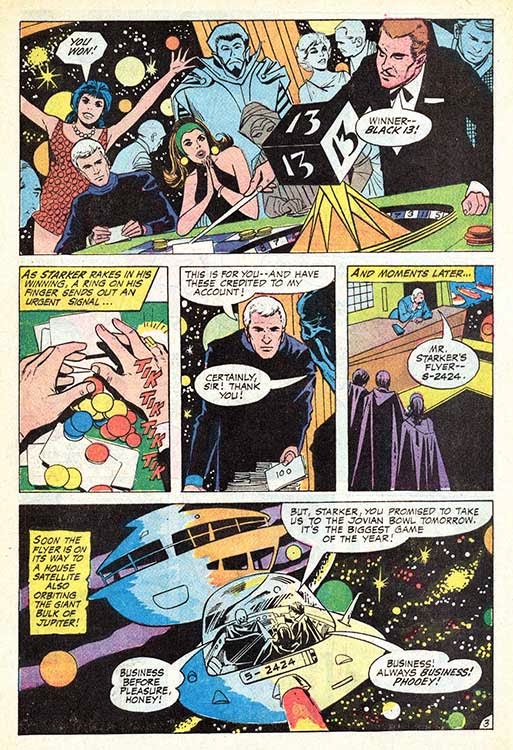 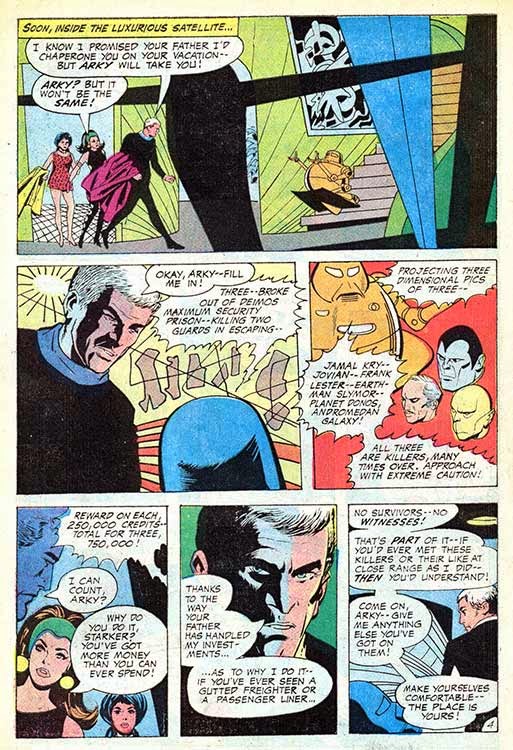 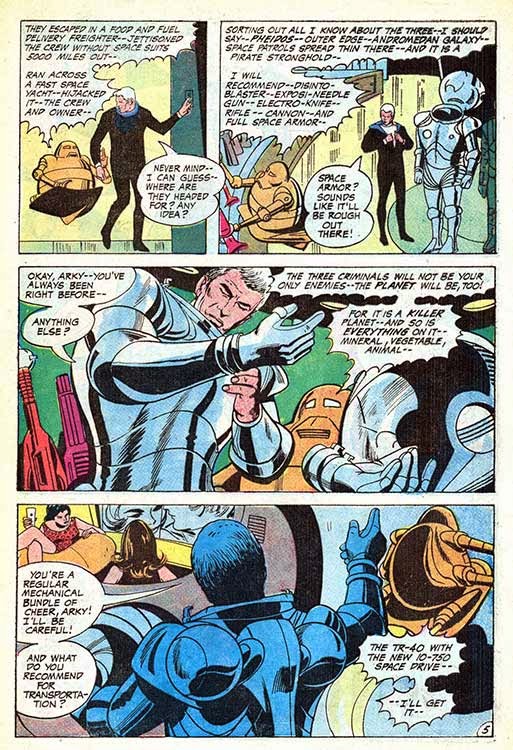 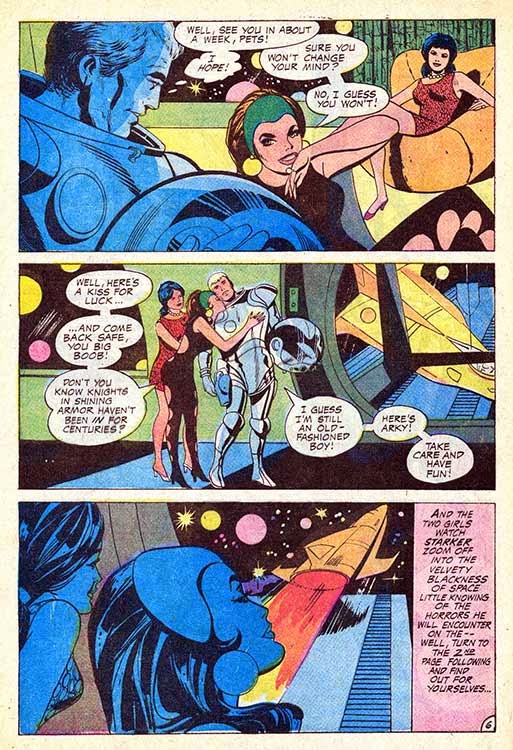 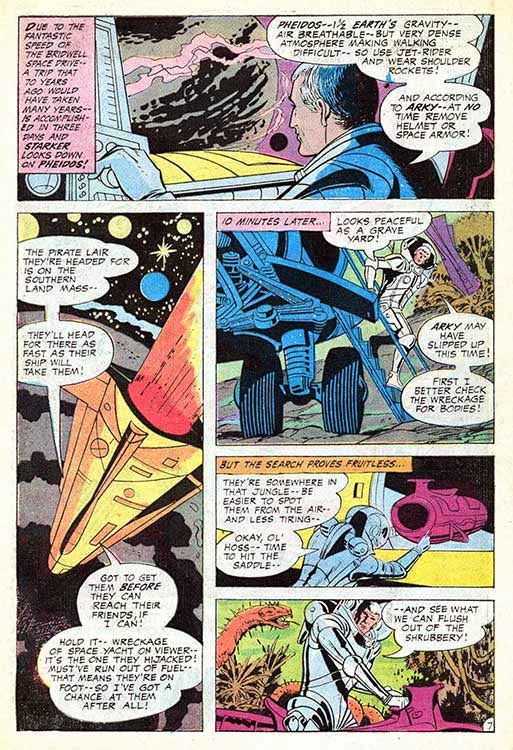 ...or vice-versa, as we will see
TOMORROW!
Written and pencilled by Mike Sekowsky, inked by Vince Colletta, this never-reprinted tale from DC's Showcase V1#91 (1970) proves the adage that "space opera" is "horse opera" with blasters instead of six-shooters.
Trivia: The "Bridwell Space Drive" was named after longtime DC editorial staffer/writer E Nelson Bridwell, one of the earliest fan-turned-pros with an encyclopedic knowledge of comics and sci-fi, and a talent for plotting stories and tying them into existing continuity.
Bridwell also co-created the Inferior Five and Secret Six.
Posted by Britt Reid at 3/10/2015 10:01:00 AM No comments: 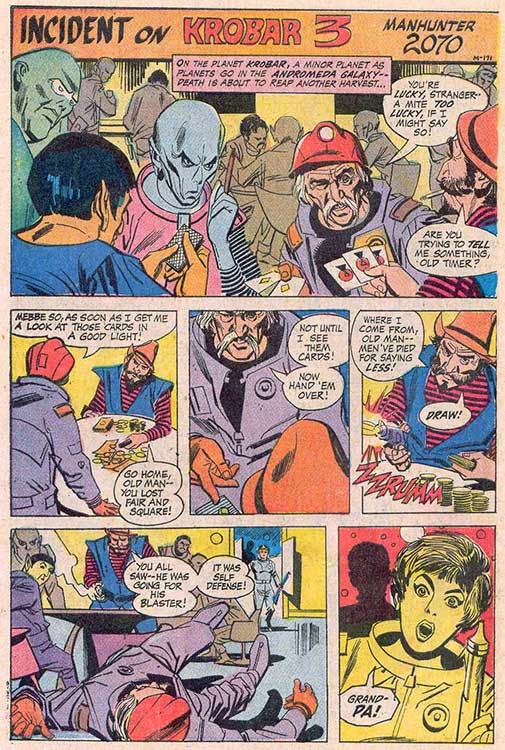 ...deep space will look a lot like the Wild West! This short appeared in the back of DC's Showcase V1 #90 (1970), leading into the final three issues of the series' original run, dedicated to one of Mike Sekowsky's more innovative projects...Manhunter 2070!
Sekowsky had quite a bit of latitude at DC as a writer/artist/editor during this period, revamping Wonder Woman, Metal Men and Supergirl (in Adventure Comics) while also presenting a couple of potential series in Showcase, Jason's Quest and Manhunter 2070.
Be here tomorrow as the never-reprinted saga of Starker begins!
Written and penciled by Mike Sekowsky, inked by Dick Giordano.
Posted by Britt Reid at 3/09/2015 10:01:00 AM No comments:

Design of the Week: BUNNY? DADDY?

Since Easter is coming, we thought we'd present an absolutely adorable piece by the legendary Walt (Pogo) Kelly featuring a bunny with a surprised look on his faces a the egg in his basket hatches, producing yet another cute animal...a baby duck!

You just don't see stuff like this anymore!
So, why not order some kidswear, or even holiday greeting cards with this one-week-only graphic?
Everyone who sees it will go "Awwww."
Posted by Britt Reid at 3/08/2015 01:01:00 AM No comments: