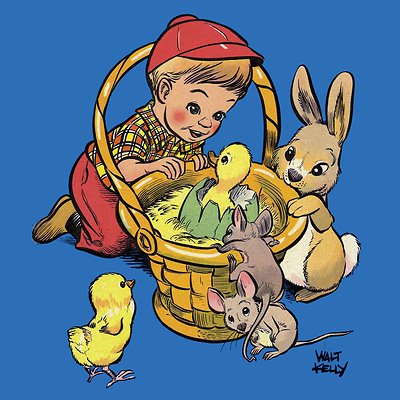 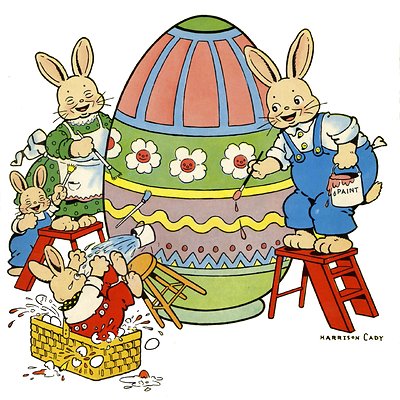 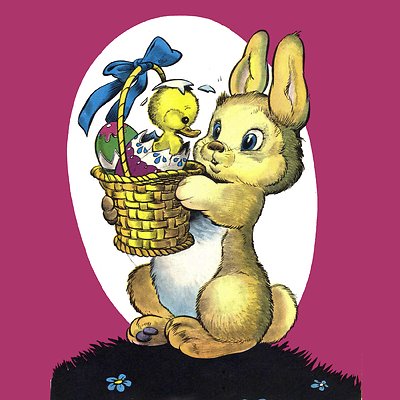 or Bunny Daddy, Baby Duck!
Bibs, creepers, toddlers' and kids' t-shirts, sweatshirts, and adult goodies like maternitywear!
NOTE: The organic clothing is from American Apparel!
Order now, so you'll have it in time for Easter!
Posted by Britt Reid at 3/05/2016 11:56:00 AM No comments:

Let's end the week with a kool project that, unfortunately, never reached fruition. 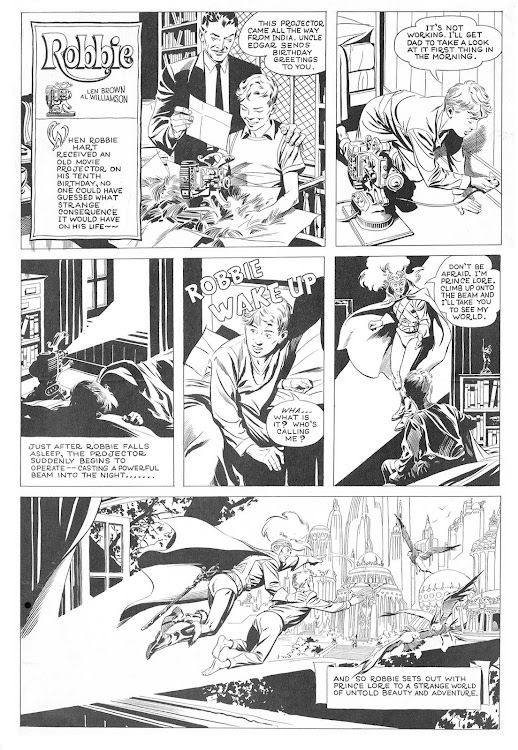 Combining Little Nemo in SlumberLand with Flash Gordon should've been an easy sell in the 1960s. 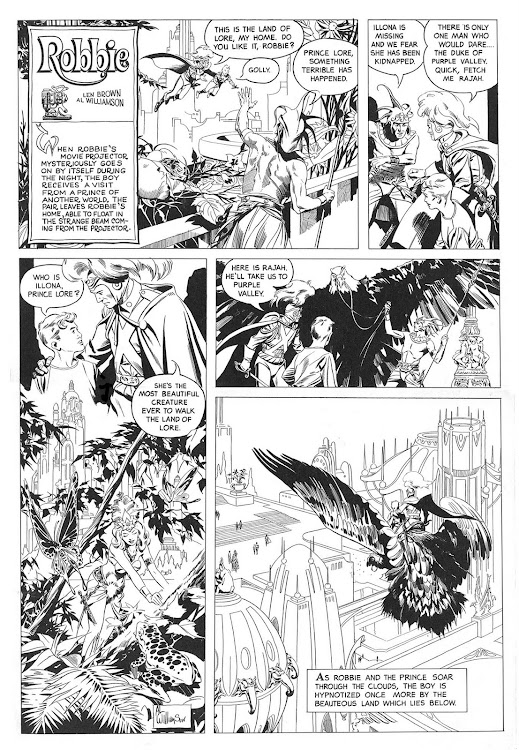 But, this two-page labor of love by writer Len (Mars Attacks) Brown and Al (Flash Gordon) Williamson was presented to the syndicates at a time when the only adventure strips were "legacy" series with an already-existing following.
So, it was consigned to the dustbin of history, published in the same 1962 issue of the fan/prozine Fantasy Illustrated yesterday's "Life Battery" originally-appeared in.
Posted by Britt Reid at 3/04/2016 02:23:00 PM No comments: 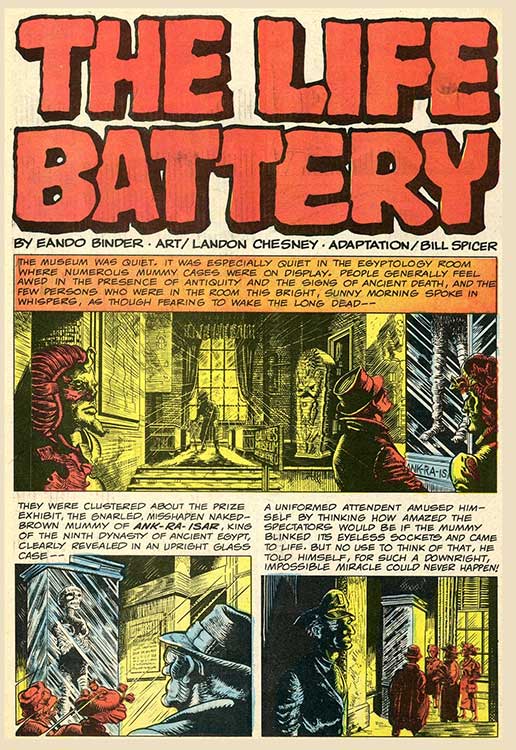 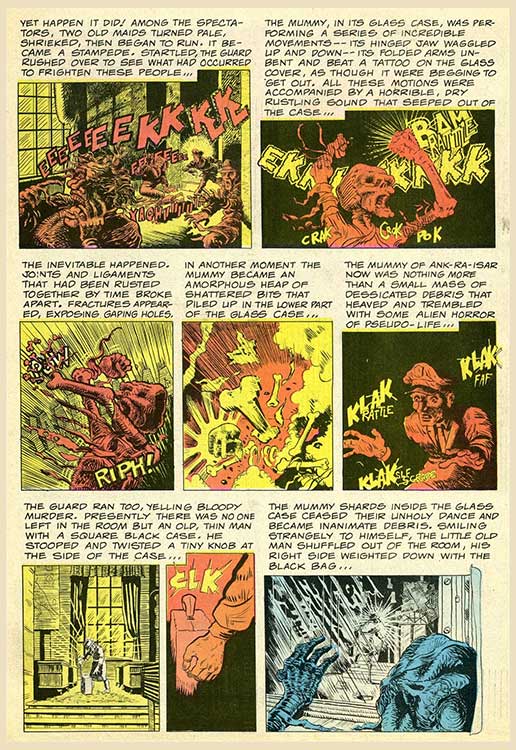 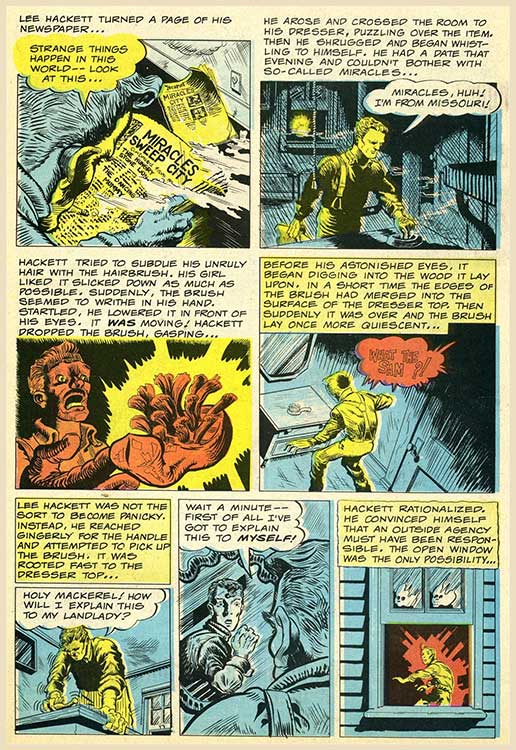 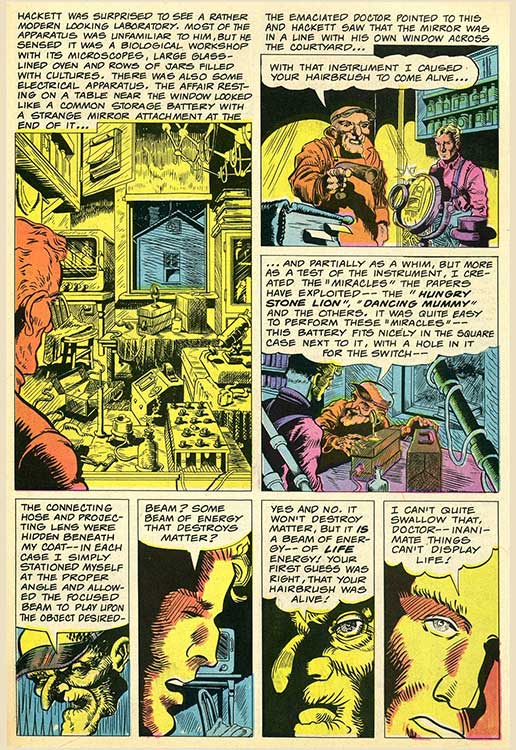 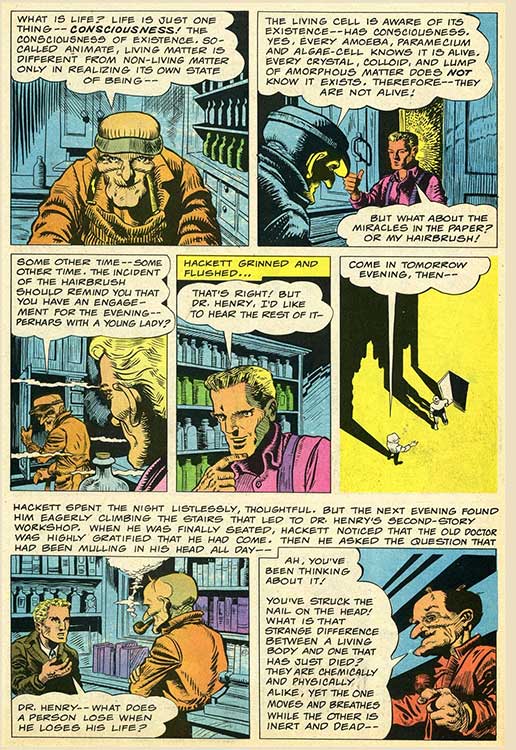 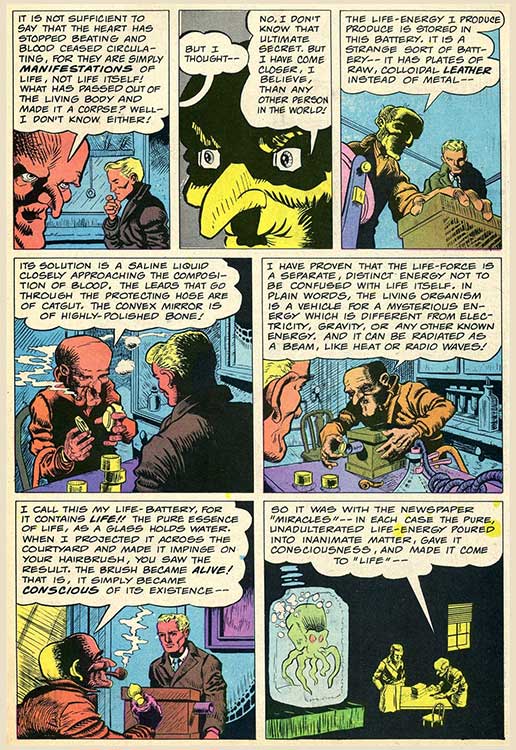 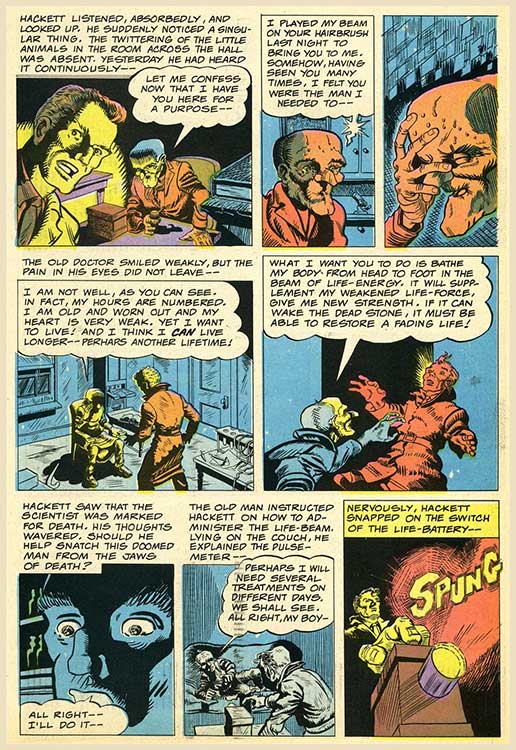 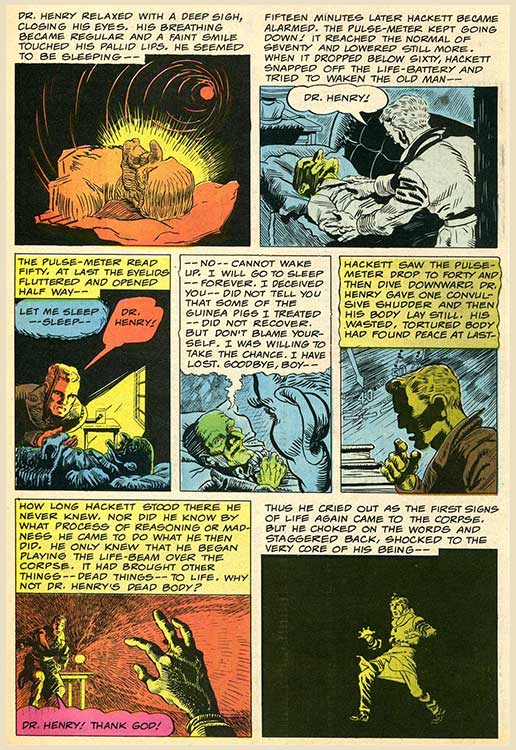 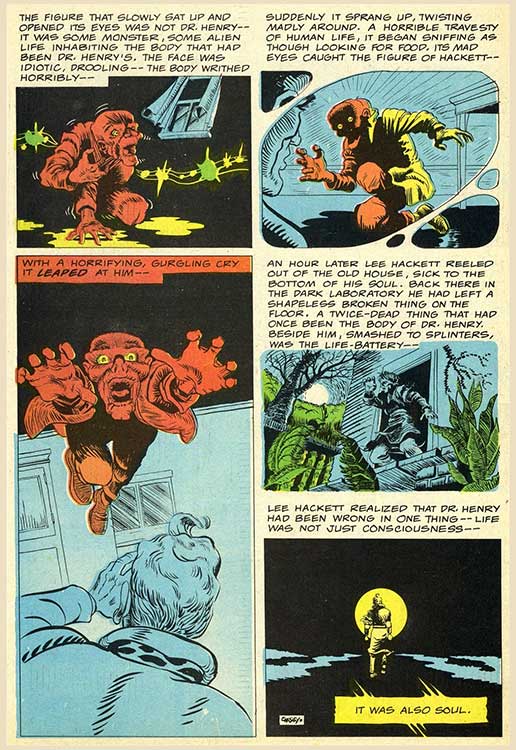 "Eando Binder" was the pen-name for the writing team of Earl and Otto ("EandO", get it?) Binder, whose tale from Startling Stories' July 1939 edition served as the basis for this adaptation by writer Bill Spicer and artist Landon Chesney.
Chesney was one of the major contributors to the just developing comics fandom in the 1960s, contributing art to numerous short-run pamphlets and magazines, including the covers to Fantasy Illustrated 1 & 3, but not 2, where this story appeared. 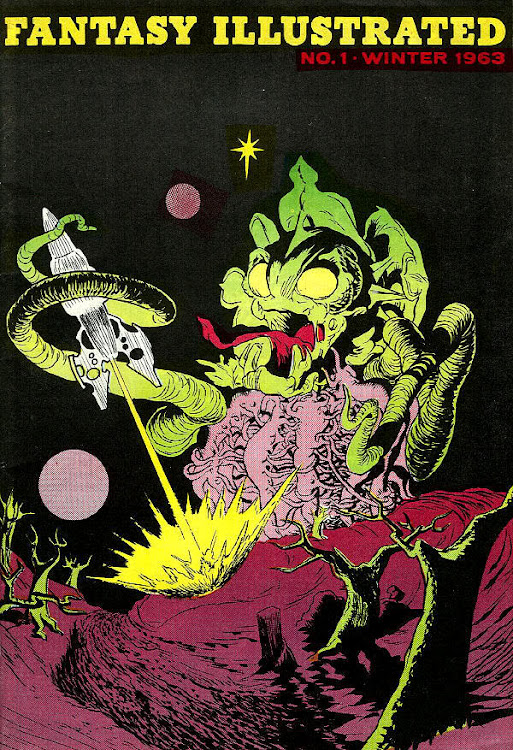 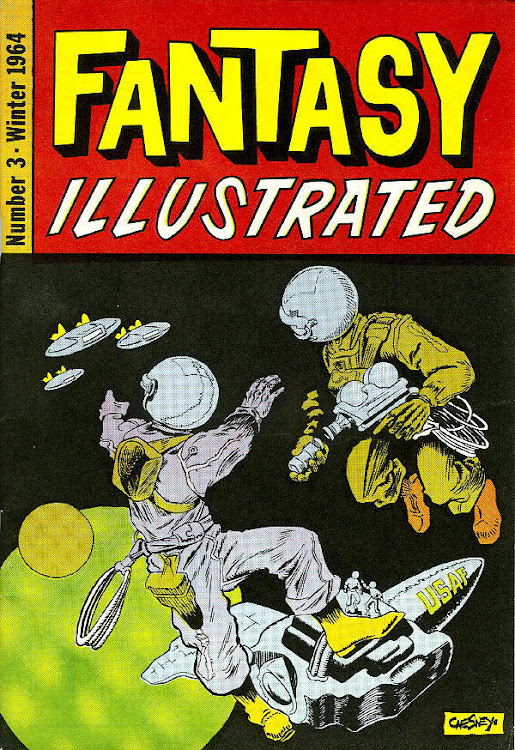 He never turned pro, and passed away in 2001.
While this version (with some superb color work) appeared in Los Angeles Comic Book Company's underground one-shot Weird Fantasies #1 (1972),  it originally appeared in b/w form in the fan/prozine Fantasy Illustrated #2 (1964), published by Bill Spicer.
Posted by Britt Reid at 3/03/2016 03:32:00 PM No comments:

Let's go from the past couple of fairly serious tales about alien invaders... 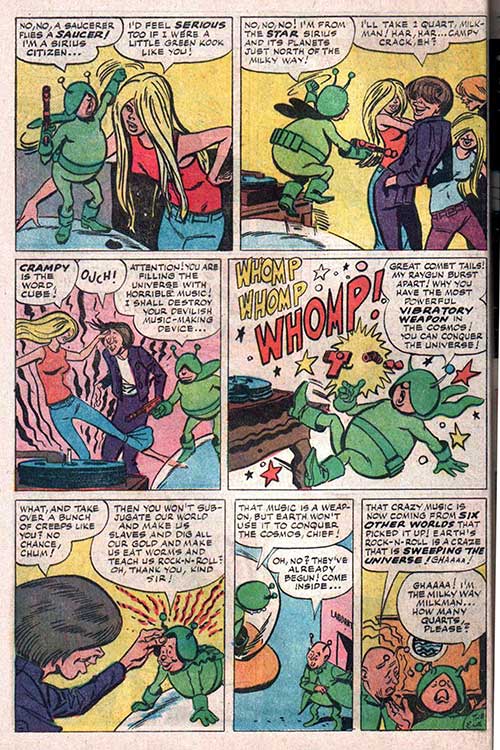 BTW, could you guess that the creators were both middle-aged guys whose exposure to rock and roll was through their kids (or even grand-kids)?
Yep!
Written by long-time sci-fi and comics author Otto Binder (born 1911), and illustrated by Golden and Silver Age artist Carl Pfeufer (born 1910), this never-reprinted two-pager appeared in the back of Harvey's Unearthly Spectaculars #3 (1967).
In point of fact, most Silver Age creators were 40 or over!
In comparison, today's comic creators are mostly in their 20s and early 30s...and judging from their output, I'm wondering if that's such a good thing...
Posted by Britt Reid at 3/02/2016 12:48:00 PM No comments: 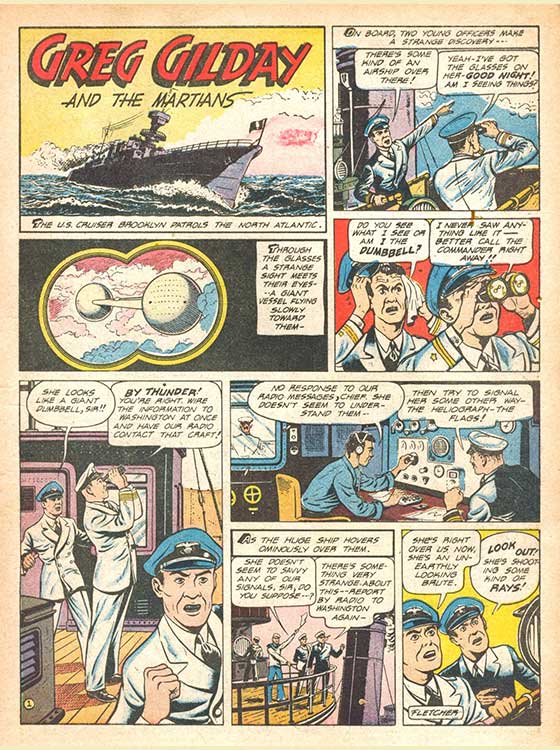 ...was a series about an interplanetary war and a superhuman hero!
But that's what they got when this strip premiered in Dell's War Comics #2 (1940)! 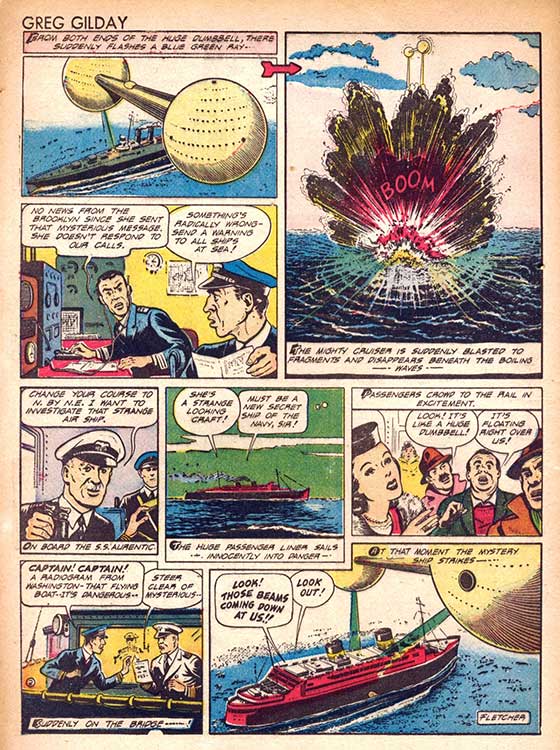 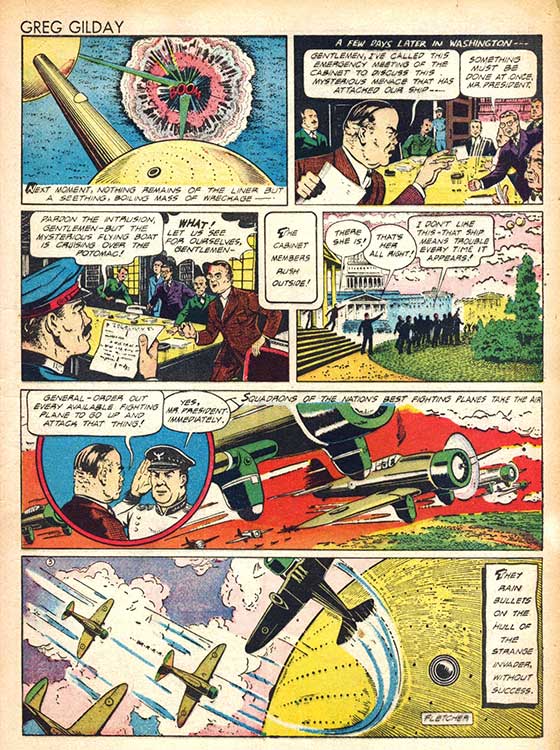 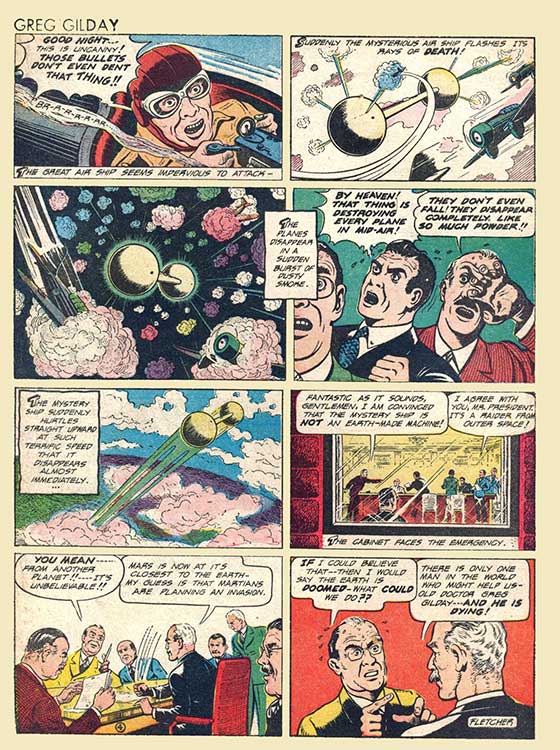 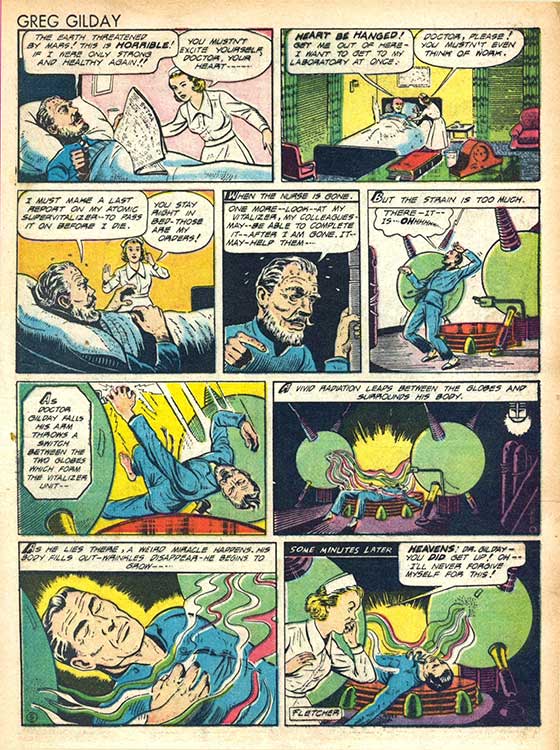 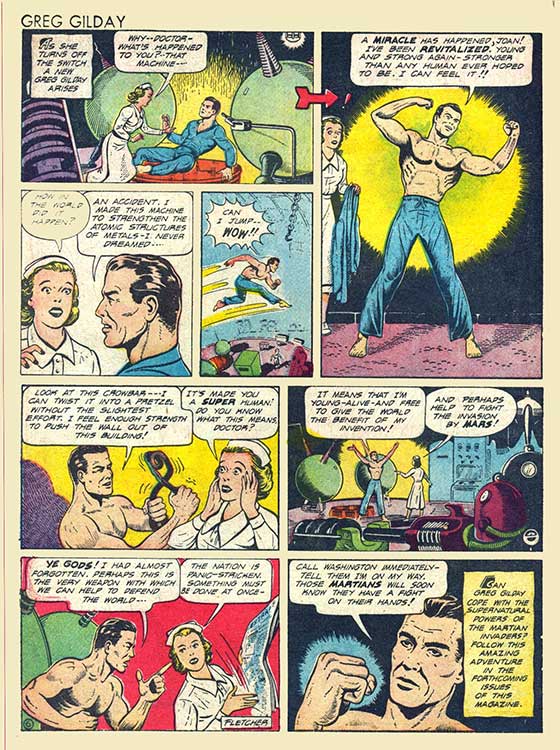 In the Golden Age, creators, unrestrained by preconceptions, tried genre mash-ups we wouldn't dream of doing today, hoping to find a "hook" to grab readers!
Drawn (and probably written) by Richard Fletcher, this never-reprinted series only ran three chapters before disappearing despite the final strip ending with a caption promising more adventures!
Note: the Richard Fletcher who did this strip is not the Dick Fletcher who worked with Chester Gould before taking over as the artist on the Dick Tracy newspaper strip in 1977.
This guy is Richard Martin Fletcher.
The Dick Tracy artist was Richard E Fletcher and didn't begin his art career until after being diacharged from the Army in 1945.
Posted by Britt Reid at 3/01/2016 10:56:00 AM No comments:

An alien invasion may not be in the form of hulking monsters and heavily-armed spacecraft... 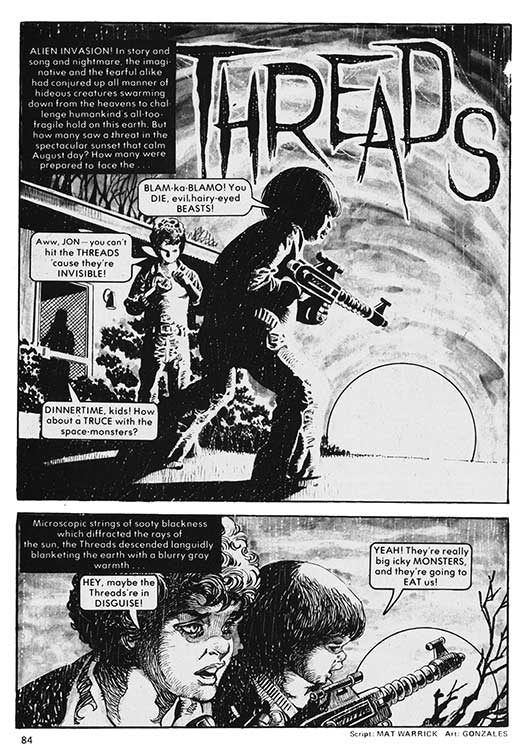 ...but something subtle and unseen... 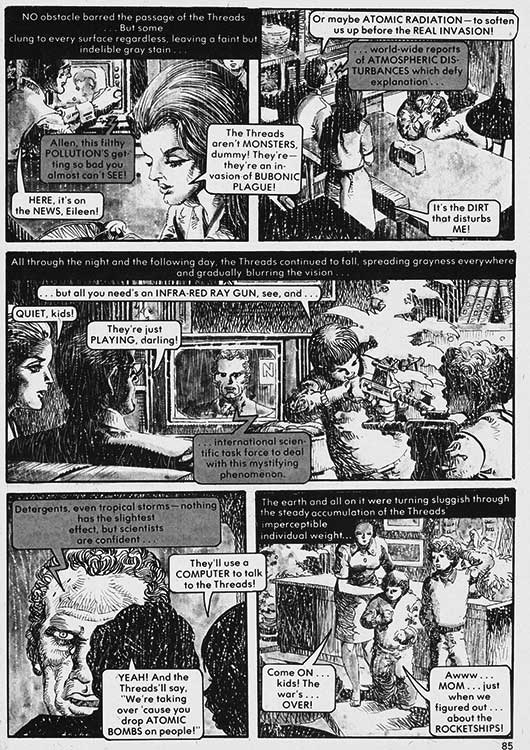 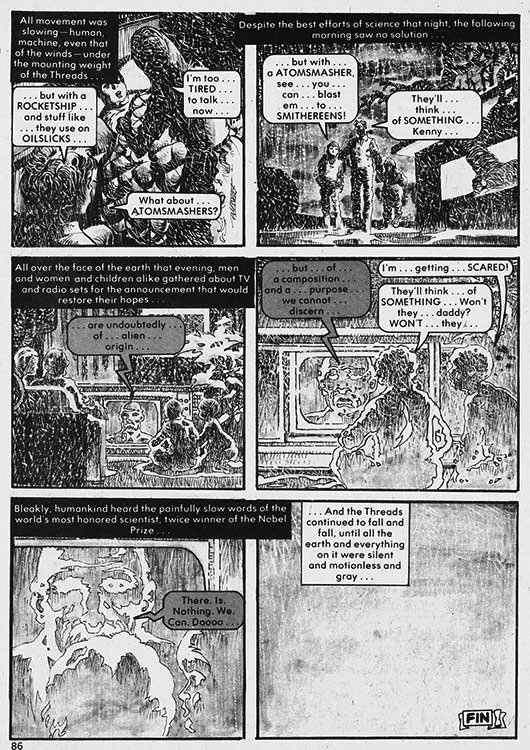 This special, published in 1976 after Unknown Worlds of Science Fiction was cancelled, ran unseen material like this story, except for the tales "Arena" which had appeared in the color Worlds Unknown title (You can read it HERE and HERE.), and "Sinner", previously-published in the pro-zine witzend.
The writer of this tale, listed here as "Mat Warrick", may be the same person as "Mal Warrick" and "Mal Warwick", as stories under all three names appeared during the mid-1970s in various titles from Marvel, Star-Reach, DC, Red Circle, and Charlton.
Artist Adrian Gonzales was part of the wave of Philippine artists who contributed work to American comics from the early 1970s to the mid-1980s.
In 1985, he turned from print comics to doing character design and storyboards for animation studios until his passing in 1998.
Posted by Britt Reid at 2/29/2016 11:13:00 AM No comments:

Do I need an excuse to run a magnificent illo like this?