The Horror...the Horror (comics, that is!)

Monster Crime!
Now that's a title!
Yeah, they knew what we budding juvenile delinquents wanted back in the 1950s!
As you might have guessed, the upcoming Halloween holiday has inspired the Atomic Kommie Comics™ crew to re-present to our Horror Comics of the 1950s™ section for your All-Hallows Eve garb and goodies!
And, what titles do we have at our kool kollectibles kollection?
Besides the aforementioned Monster Crime, there's Tales of Horror, Horror from the Tomb (see a trend?), Beware! (with a Frank Frazetta cover!), and The Clutching Hand, The Hand of Fate, Horrific!, Weird Adventures, Baffling, Challenge of the Unknown, Terror Tales, Haunted, The Beyond, Weird Terror, Weird Mysteries, Weird, Diary of Horror, WitchCraft, and Eerie!
Plus collectibles with our ghoulishly-graphic, viscerally-vintage Horror Comics of the 1950s™ logo!
Be the envy of all the kids on your block this Halloween with black or white t-shirts, tote bags for your candy, and mugs, magnets, buttons and other perplexing paraphernalia!
Posted by Britt Reid at 9/26/2009 01:58:00 AM No comments: 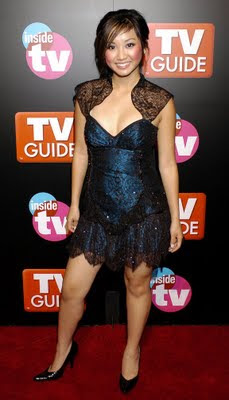 Brenda Song began her career as a child fashion model and quickly moved into tv commercials.
Then, after appearing in guest roles on a variety of tv series, she landed in the Disney talent pool where she was groomed for pop-culture stardom the way many other young performers like Lindsay Lohan, Hillary Duff, Miley Cyrus and Vanessa Hudgens previously had been.
Like them, she became a supporting player in a number of Disney Channel tv movies and ongoing series including The Suite Life of Zack & Cody and Phil of the Future, before being given a "breakout" lead role of her own--Wendy Wu: Homecoming Warrior, for which the black belt-holding actress did most of her own fight sequences!
While it hasn't generated the resulting media frenzy of, say, Hannah Montana, Wendy Wu did well enough to warrant a sequel and possible ongoing series.
Trivia: Brenda supports charitable causes including St. Jude's Childrens' Hospital and the eco-oriented Disney's Friends for Change. 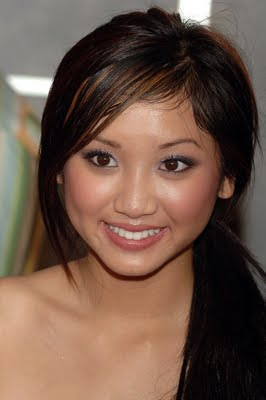 Design of the Week--Judy of the Jungle 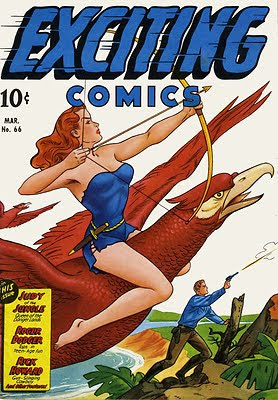 Each week, we post a limited-edition design, to be sold for exactly 7 days, then replaced with another!
This week...
Since our new Jungle Girls calendar has received such an amazing response, we decided to move up our plans to roll out some of the new images from it on kollectibles including messenger bags, t-shirts, et all with the one that has the most crossover appeal for both males and females.
Presenting...Judy of the Jungle!
One of a plethora of animal skin-clad heroines who popped up after World War II, Judy had several things going for her...
1) A name you could actually pronounce! Most jungle-based heroines had names like Rulah, Vooda, even Zoot!
2) She was a redhead, making her visually-distinctive from the mostly-blonde crowd!
3) Her covers, illustrated by noted Golden Age artist Alex Schomburg using the alias "Xela", were paintings, rather than pen-and-ink art, giving them a unique "look"!
So, if you're looking for a strong role model for a young lady, or you just want to look at a powerful, scantly-clad woman in action, the Atomic Kommie Comics™ crew sez you can't go wrong with...Judy of the Jungle!
Posted by Britt Reid at 9/24/2009 11:43:00 AM No comments: 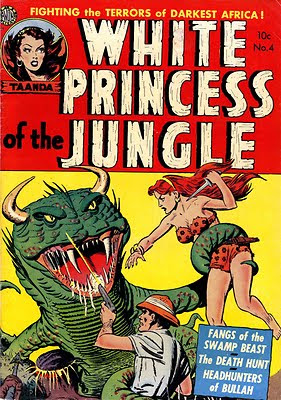 A dozen dynamic damsels fight fiends, fantastic fauna and funky foliage while barely wearing any clothing on these classic comic covers and movie posters in our newest 2010 12-Month Calendar--Jungle Girls! 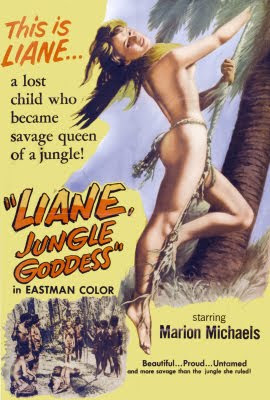 And don't forget our over two dozen pop-culture 2010 12-month calendars! ;-)
PLUS: Today, September 23rd ONLY...FREE Economy or Standard Shipping if you spend $50 or more (before taxes, if any) on ANY items!
Just enter GO4VIP at checkout!
*Free Economy or Standard shipping for CafePress.com purchases of $50 or more, excluding shipping charges and applicable sales tax. Delivery address must be within the United States and cannot be a PO Box. All orders will be Economy shipping unless the order is not eligible for Economy shipping (e.g., order exceeds Economy weight restrictions). Coupon code must be entered at check out. Promotion starts on September 23, 2009, at 12:00 a.m. (PST) and ends on September 23, 2009 at 11:59 p.m. (PST). Cannot be combined with any other CafePress.com coupons or promotions and this offer may change, be modified or cancelled at anytime without notice.
Posted by Britt Reid at 9/23/2009 08:12:00 AM No comments:

The Jungle Girls are Coming!

Due to technical difficulties with a supplier, I'll have to spend the next day or so upgrading my Squidoo pages, so no Hero History or Fantastic Femmes or even a crassly-commercial plug today.
See Ya Tomorrow!
Posted by Britt Reid at 9/21/2009 03:22:00 PM No comments: 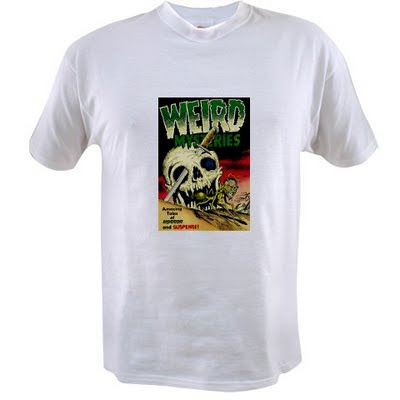 Enjoy a great look and fit at a reasonable price. Only $14.99 each!
Most of our designs are EXCLUSIVE...NOT available at other on-line or brick & mortar stores!
The Value T is made of breathable, midweight 100% cotton and is perfect for male or female casualwear under a windbreaker, varsity letter jacket, sportsjacket, blazer, vest, or button-down sweater.
Or, order a size or two larger than normal, and use it as a nightshirt, gymwear, or dormwear!
Horror Comics of the 1950s Value T-Shirts
(Like the one shown above!)
Lost Heroes of the Golden Age of Comics Value T-Shirts
Crime & Punishment Value T-Shirts
Heroines Value T-Shirts
War: Past, Present & Future Value T-Shirts
Western Comic Adventures Value T-Shirts
True Love Comics Tales Value T-Shirts

PS: You may note we're upgrading our look to make your browsing & shopping experience easier and faster.
Some pages, like this have already been modified.
The rest will be done by the end of the month.
PLUS: we're adding several more pages in other genres!
Watch for them!
Posted by Britt Reid at 9/20/2009 02:08:00 PM No comments: