Join Us in the Peter Cushing Centennial Blogathon! 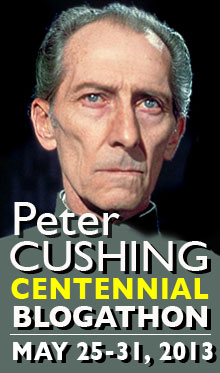 To celebrate the 100th birthday of horror cinema legend Peter Cushing, a wild collection of bloggers (including yours truly) are doing a blogathon!
You can see our entries (there'll be a couple) over the next few days at Secret Sanctum of Captain Video™, where we're covering Cushing's turn as Doctor Who!
Posted by Britt Reid at 5/25/2013 11:44:00 PM No comments:

Reading Room: ROBOTMEN OF THE LOST PLANET "Rise of the Humans"

When Last We Left What Remained of Humanity...

...in the far future, robots have rebeled and conquered the human race.
Humanity's survivors have been forced from cities and towns and now live in caves on the outskirts.
But, after ten years, newly-armed humans are about to take back the planet... 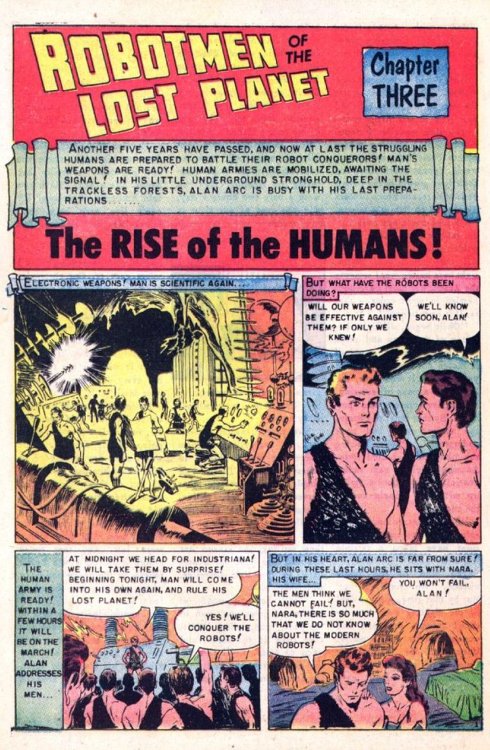 This 1952 one-shot title from Avon Comics was scripted by Walter (The Shadow) Gibson and rendered by Gene Fawcette.
Avon did an amazing amount of one-time-only titles, probably more than any other publisher.
Some of them were adaptations of novels Avon's paperback division had published, like An Earthman on Venus (which we'll be running soon).
Others, like RobotMen, were original stories.
Posted by Britt Reid at 5/24/2013 10:09:00 AM No comments:

When Last We Left the Human Race...

...just five years and we've lost all sense of fashion?
(And what weapons were we using to kill the large mammals that provided those big pelts?)

Tomorrow:
Rise of the Humans!
This 1952 one-shot title from Avon Comics was scripted by Walter (The Shadow) Gibson and rendered by Gene Fawcette.
Posted by Britt Reid at 5/23/2013 08:45:00 AM No comments:

Reading Room: ROBOTMEN OF THE LOST PLANET "Massacre of Mankind"

Before Terminator!
Before Magnus: Robot Fighter!
Before BattleStar Galactica (reboot)!

...humans were subjugated by the least-threatening robots ever seen (with the possible exception of Buck Rogers' Twiki)!

Tomorrow:
Robots Rule the Earth!
The art for this 1952 one-shot title from Avon Comics is by Gene Fawcette, an Avon mainstay who did everything from horror to Westerns to romance.
Perhaps the most unusual aspect of this tale is the scripter...Walter Gibson, aka "Maxwell Grant", the primary writer of the legendary pulp character, The Shadow!

Gibson, a trained magician-turned writer did very little "hard" sci-fi during his long career...except in 1951-54, where he edited (and wrote under several pseudonoms) most of the contents of Charlton's short-lived (2 issues) Fantastic Science Fiction pulp magazine, editing Charlton's Space Adventures comic for it's first 11 issues, as well as scripting several other one-shots for Avon Comics.

For the record, Gibson also wrote two volumes of adaptations of Twilight Zone TV episodes (with a couple of original tales mixed in), but none of those were sci-fi.
Posted by Britt Reid at 5/22/2013 12:41:00 PM No comments: 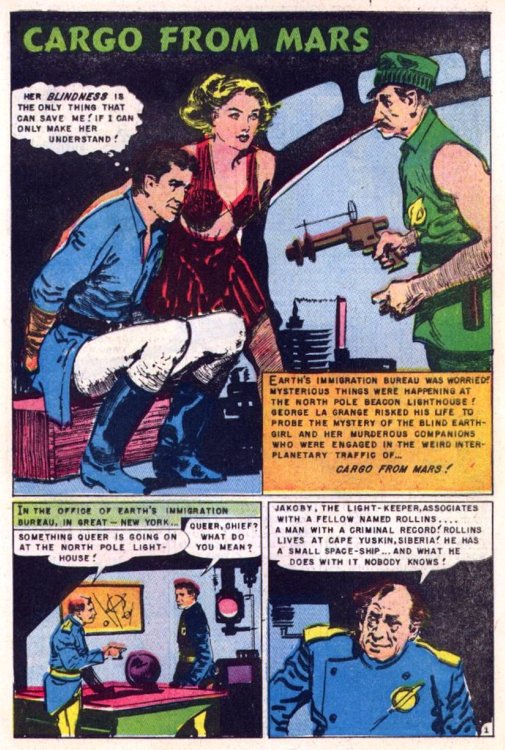 ...that appeared in back of a famous one-shot comic book. 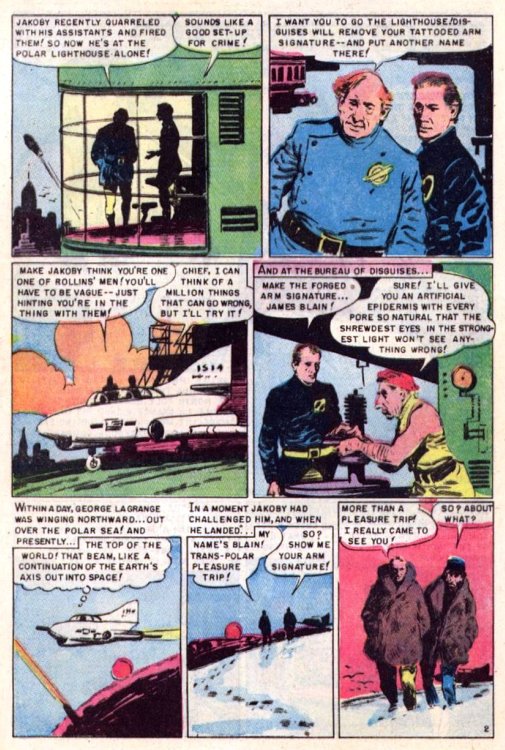 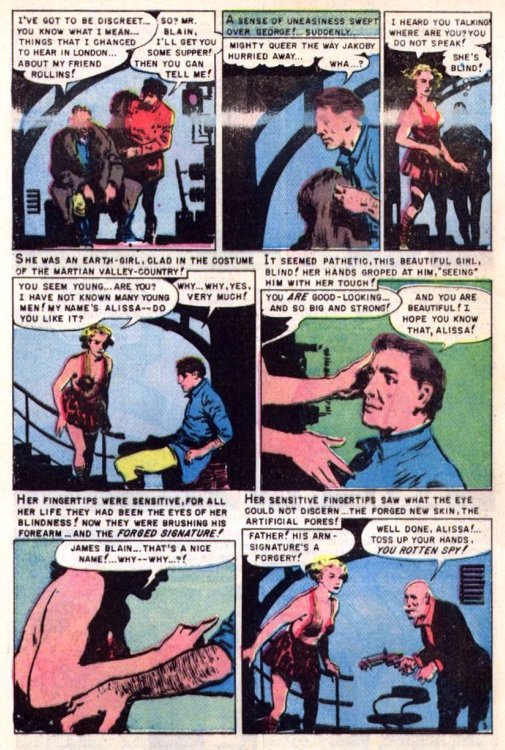 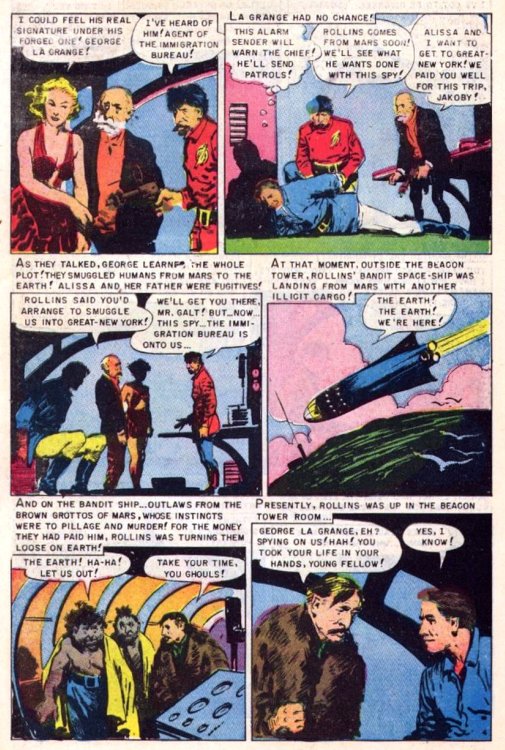 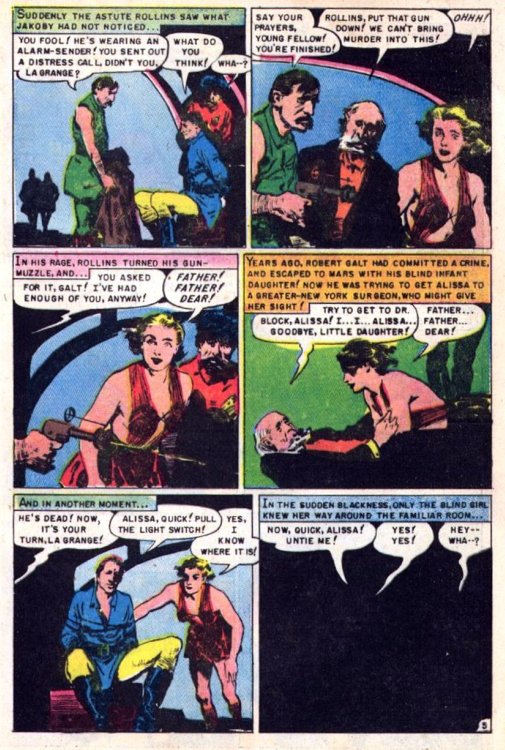 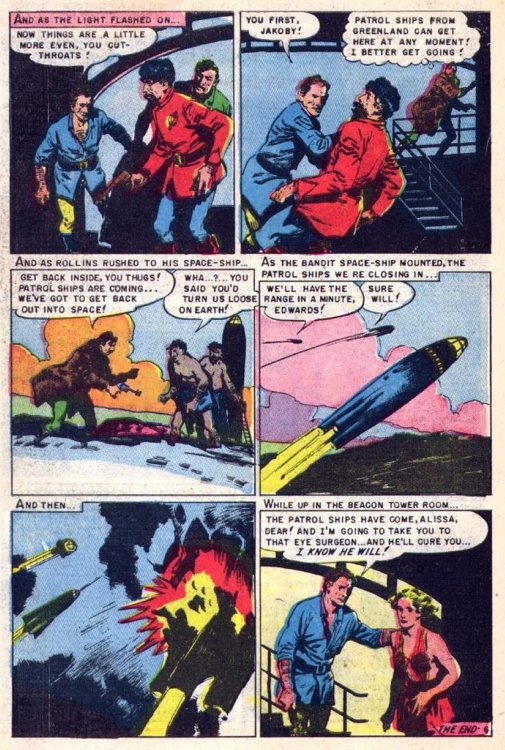 Illustrated by Gerald McCann, this well-written little tale was hidden in the back of this 1952 book...

...noted for it's rather silly-looking robots based on this toy, known as "Popping Martian", "Panic Pete", or "Bug-Out Bob"!

Be here tomorrow when we present part one of the cover-featured robot apocalypse along with a secret connection to a legendary pulp hero!
Visit
The Future WAS Fantastic!

Reading Room: WEIRD TALES OF THE FUTURE "Day of Doom"

It's Monday, which many of us consider to be the... 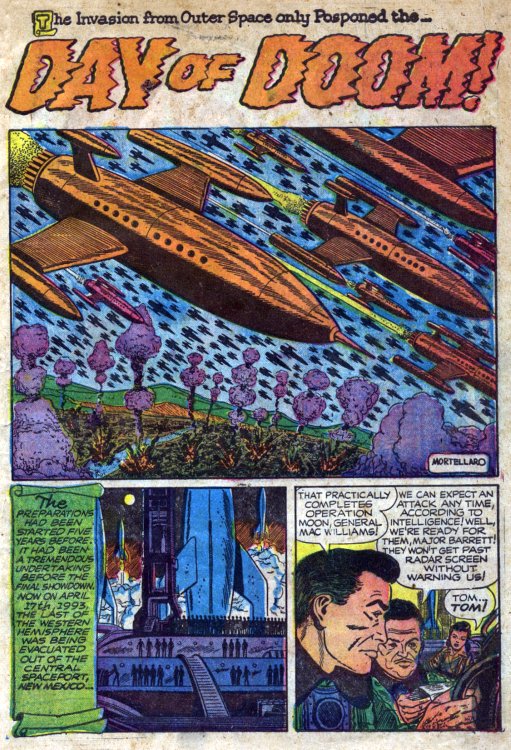 ...as we begin another long week of work or school.
But we usually don't mean the phrase quite as literally as this apocalyptic tale which...well, read for yourself... 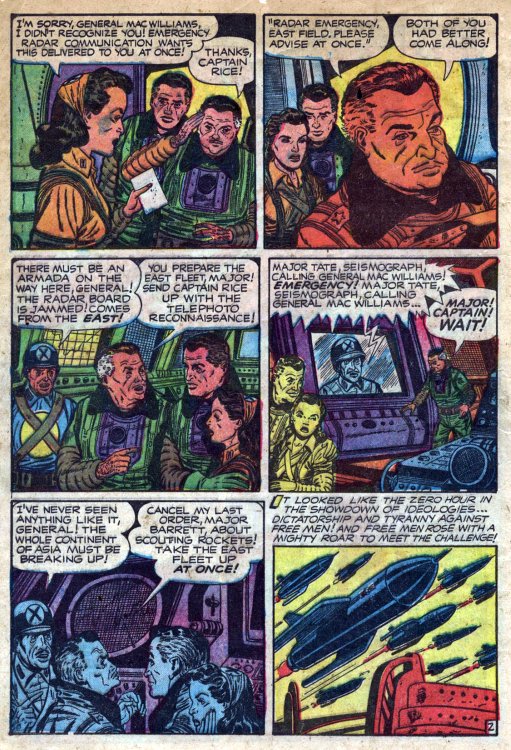 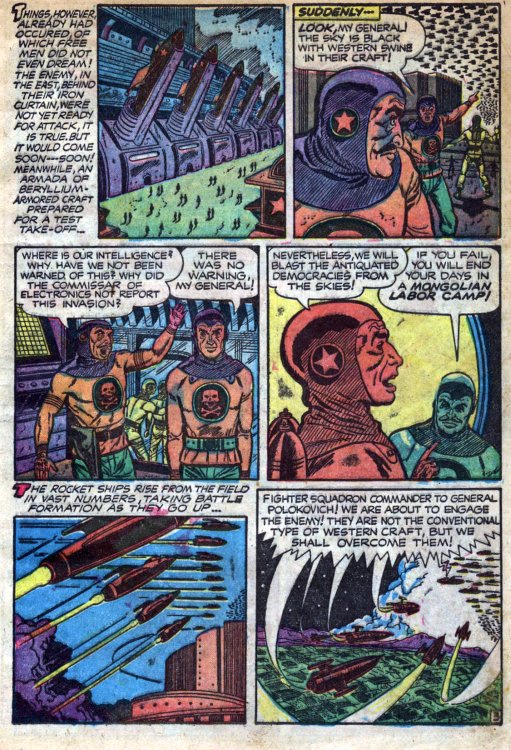 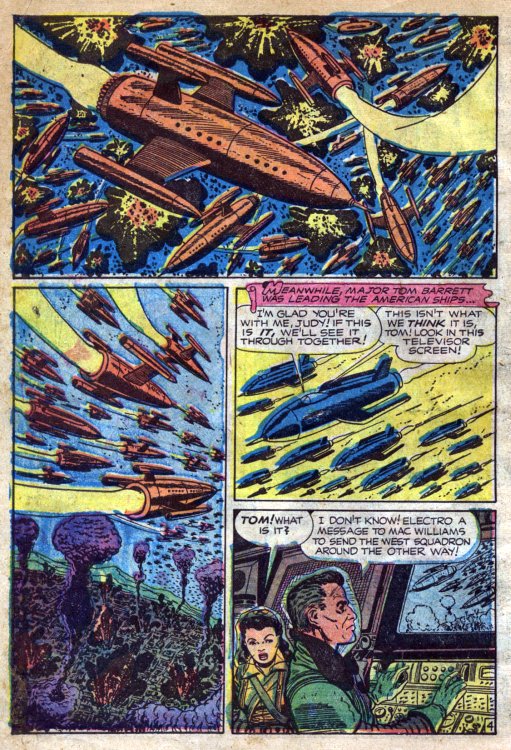 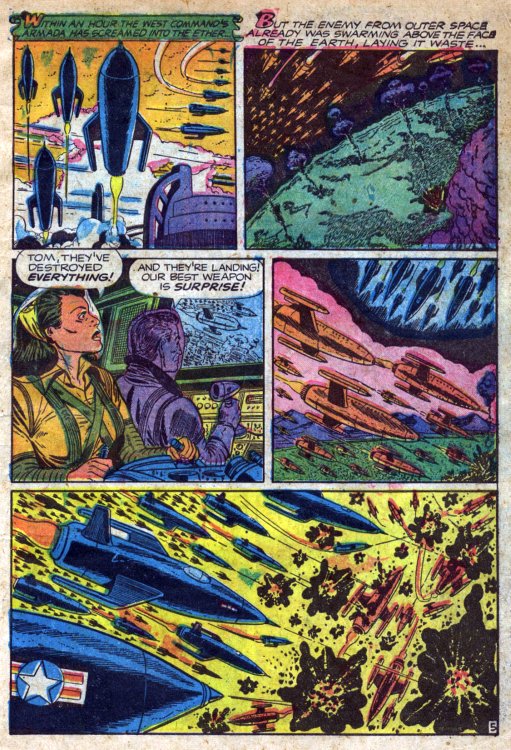 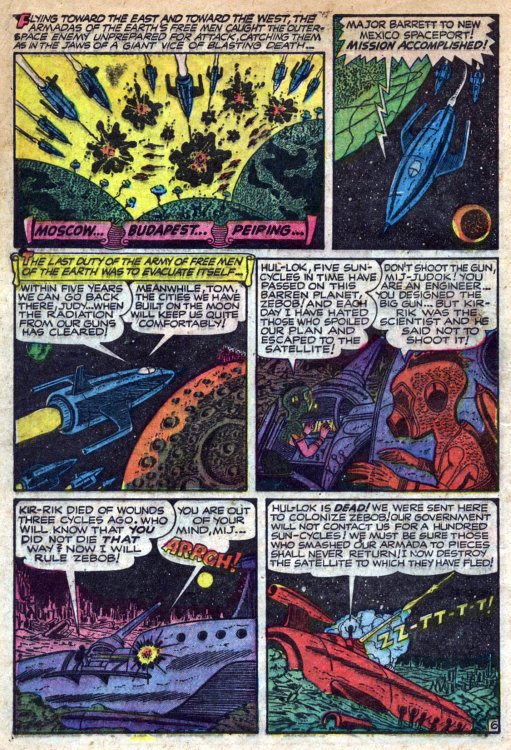 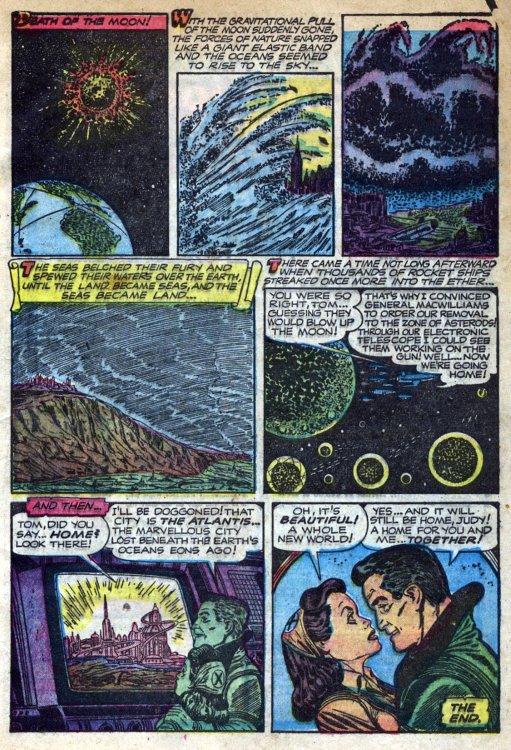 Talk about "everything but the kitchen sink"!
Us vs Commies!
Commies vs Aliens!
Aliens vs Us!
Evacuation of the Earth!
Destruction of the Moon!
Finally, to top it all...Atlantis Rising!
And all that in only seven pages!

This story from Key's Weird Tales of the Future #4 (1952) could, with a little updating, make a helluva feature film or TV mini-series!
While the writer is unknown, the artist was Tony Mortellaro, who did hundreds of tales in various genres for Key and Atlas/Marvel, (where he became Associate Art Director under John Romita in the 1970s).
Visit
The Future WAS Fantastic!

The amazing Francesco Francavilla does, as this alternate cover for #15 of Dynamite's Shadow comic book demonstrates!
If that doesn't convince you, maybe the alt cover for #16 will do the trick...

BTW, if you want more The Shadow stuff, have a look at... 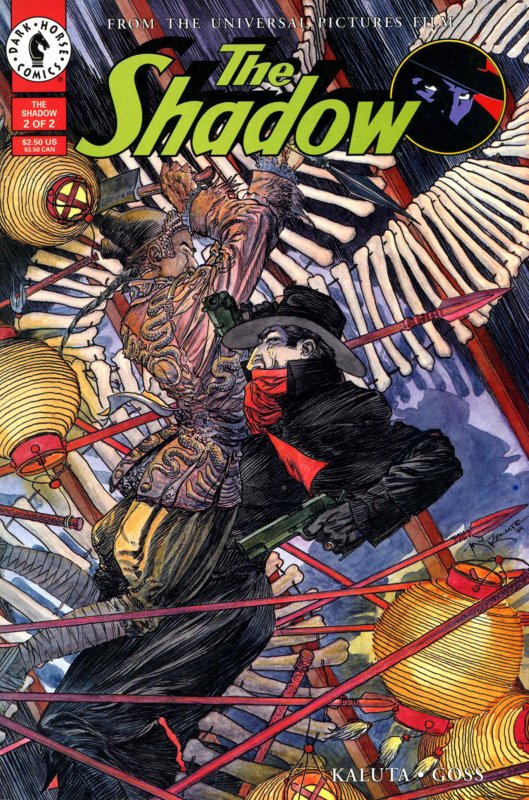 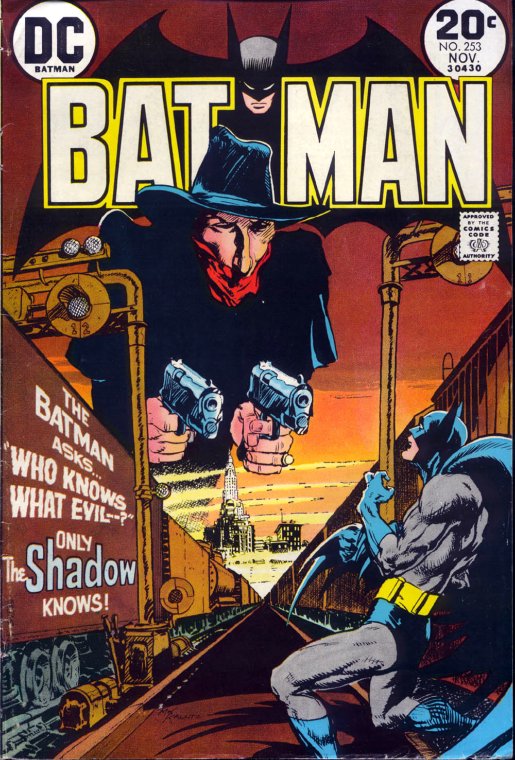 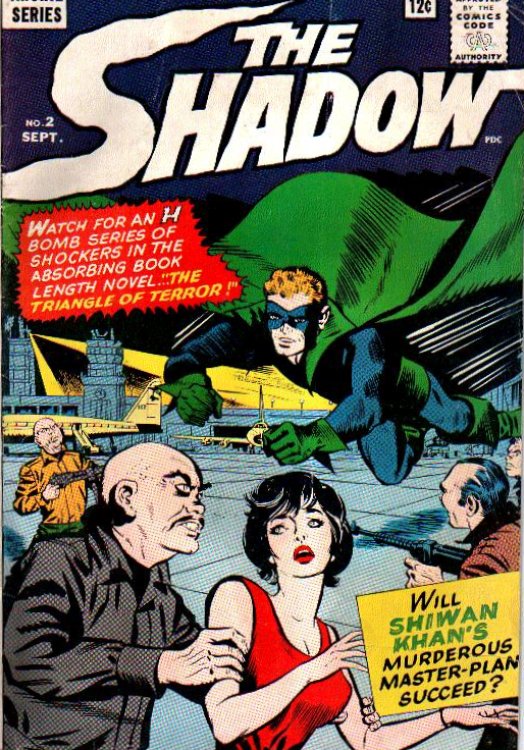