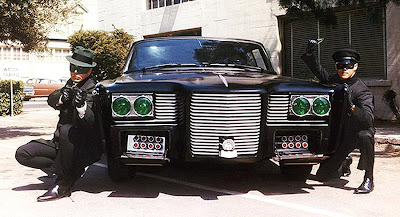 In the 1966 Green Hornet tv series, the Black Beauty was a converted 1965 Chrysler Imperial towncar with high-explosive rockets under the front and rear directionals, knockout gas sprayer in the front grille, and "infra-green" lights, which combined with flipdown translucent sunvisors, enabled driver and passenger to see in the dark. 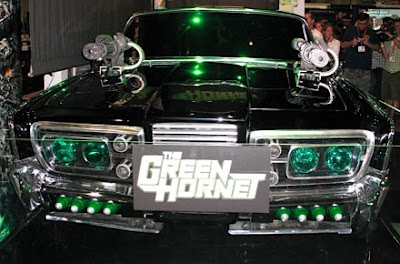 As shown this weekend by the 2010 Green Hornet movie's star Seth Rogan at the SDCC, the NEW Black Beauty is strikingly-similar, but with the addition of high-powered machine guns in the same positions as on the Batmobile in the 1989 Batman movie!
Posted by Britt Reid at 7/25/2009 02:58:00 PM No comments:

We've decided to introduce a new feature to our line of collectibles...Design of the Week!
Each week, we'll post a limited-edition design, to be sold for exactly 7 days, then replaced with another!
This week...
40 years ago, the ULTIMATE folk / rock music festival almost wasn't held in a field in upstate New York!
Subtitled "The Aquarian Exposition", it featured a one-time ONLY lineup of most of the greatest solo performers & groups of the era, including (incomplete list):
Richie Havens
Ravi Shankar (father of Norah Jones)
Melanie
Arlo Guthrie
Joan Baez
John Sebastian
Santana
Canned Heat
Grateful Dead
Creedence Clearwater Revival
Sly & the Family Stone
Janis Joplin & the Kozmic Blues Band
The Who
Jefferson Airplane
Joe Cocker
Country Joe & the Fish
Blood, Sweat & Tears
Crosby, Stills, Nash & Young
Sha-Na-Na
Jimi Hendrix
Amazing, eh?
Besides various live celebration performances commemorating the event, there's a new film about how the festival came to be--Taking Woodstock!
Over the next few weeks, Design of the Week will be hosting various Woodstock-related designs, just in time for you to go "secret chic"!
Go "groovy, man, groovy" with this kool body-painted lady who knows the meaning of "uninhibited", but in a family-friendly way!
Enjoy!
Peace!
Love!
Posted by Britt Reid at 7/24/2009 12:12:00 AM No comments:

Not a Dream! Not an Imaginary Story! 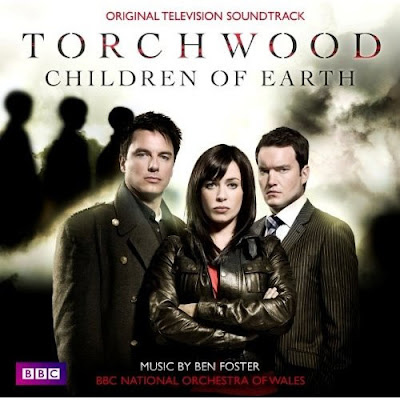 One of the three characters shown above does not survive tonight's episode! 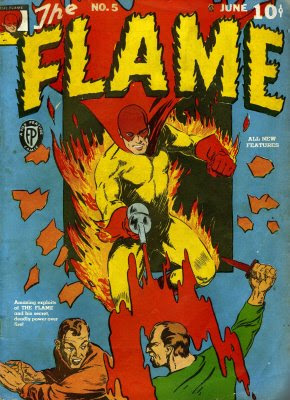 Super heroes and Himalayan monasteries seem to go hand-in-hand.
In the Golden Age, next to exposure to something radioactive, being raised from childhood or trained after you crash-landed as an adult by Tibetan lamas was the primary factor in the creation of superheroes (and more than a few supervillains)!
Look at The Shadow, Amazing-Man, The Green Lama, etc, and later; Iron Fist, The Shroud, Dr Strange, and Dr Doom. (Even The Batman and Doc Savage visited lamaseries during their teens to train!)

Baby orphan Gary Preston was raised by a group of mystic priests to be an example of the pinnacle of human mental and physical development.
In addition, they trained him to control any fire in his immediate vicinity as well as regulate his own body temperature from normal to just short of bursting into flame himself! (He eventually learned how to do that, too!)
He was armed with a technologically-advanced pistol-sized flamethrower with a self-renewing fuel supply, since he couldn't create fire, just manipulate it.
And, as a final gift, he was taught how to enter flames without harm, then teleport himself to anywhere else in the world there was a fire, and appear, unharmed, from within it!
Thus armed and outfitted in a yellow and red costume, Gary returned to the Outside World as...The Flame!
(And before you ask, he arrived on the comics scene several months before The Human Torch debuted in Marvel Comics #1!)

His first appearance (and origin recounted above) was in WonderWorld Comics #3, created by writer / artist Will Eisner (The Spirit) and artist Lou Fine, who also did most of the covers!

The Flame went on to become one of Fox's top three superhero stars, as evidenced by his starring role in all seven issues of the anthology comic Big 3, which he shared with The Blue Beetle, Samson, and later, V-Man.
He also had his own title for eight issues.
He remained the lead feature in WonderWorld Comics until #33, the final issue, in 1942.

There was a brief revival in the 1950s, then he disappeared, not to be seen, except in comics reference books, until 2007 when Alex Ross revived him as one of the many Golden Age characters returned to action in the new Project SuperPowers mini-series!

Of course, we at Atomic Kommie Comics™ have revived The Flame as part of our Lost Heroes of the Golden Age of Comics™ line, including six of his best 1940s covers, including his first appearance, on t-shirts, messenger bags, mugs and other kool kollectibles!
And, there'll be a The Flame 2010 12-Month Calendar with a dozen dynamic covers on sale this August!

This summer, don't let your cash burn a hole in your wallet!
Put it to good use; The Flame collectibles for you or your pop-culture collecting loved one! 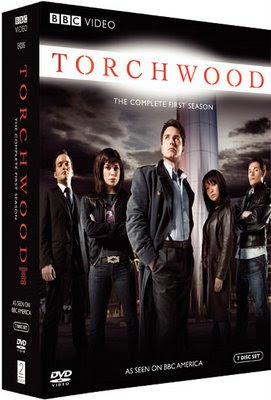 I've been enjoying Torchwood (the series) since their initial airing on BBCAmerica, and following the basic concept of Torchwood since the group's introduction on Doctor Who. (IMHO, turning Torchwood down was the stupidest thing SyFy ever did! Calling themselves "SyFy" was the second stupidest, but I digress...)
The idea of a secret, Brit-centric, counterpoint to the rather public UNIT (United Nations International TaskForce) appealed to me, and Torchwood's rise, fall, and resurrection, made for an interesting ongoing plotline within Dr Who.
When the surviving Torchwood unit got it's own series, incorporating another Dr Who character, Captain Jack Harkness, I figured, give it a shot; it'll at least be as entertaining as the other spinoff, Sarah Jane Adventures (which, though juvenile, is rather fun)...
Torchwood took the opposite tack, practically turning into "Lust in Space" and coming close to being the first R-rated sci-fi tv series!
It also became the breakout hit BBCAmerica hoped HEX and Footballer's Wives would be, as well as one of my not-so-guilty pleasures!

I'd been looking forward to the new mini-season and, despite obvious plot elements of Midwich Cuckoos and various Quatermass series running throughout Children of Earth, I'm really enjoying the mini-series due to the fast-paced plotting and well-done character development.
Catch the remaining four nights thru Friday. It's not like there's much else on...

In addition, if you want to buy the previous two seasons, Costco has the season box sets for only $44.99 each!
I picked them up a week ago and did a marathon this past weekend, watching select eps with commentary and watching all the special features.
Posted by Britt Reid at 7/21/2009 03:06:00 PM No comments:

Email ThisBlogThis!Share to TwitterShare to FacebookShare to Pinterest
Labels: Children of Earth, costco, Doctor Who, Dr Who, dvd, Torchwood 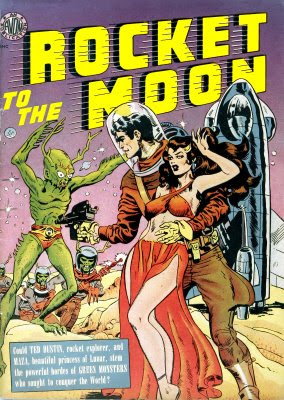 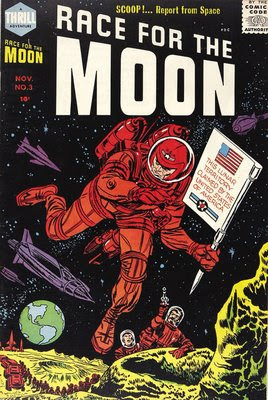 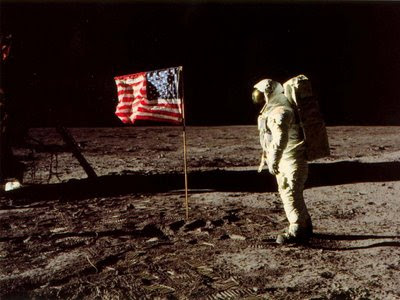 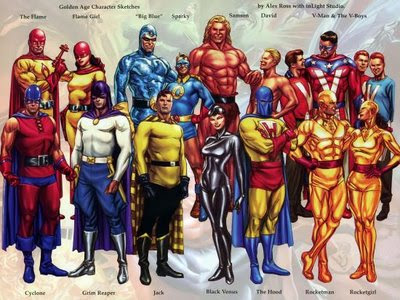 In addition, you can find Atomic Kommie Comics™ kool kollectibles emblazoned with the ORIGINAL 1940s classic cover art featuring these characters...
Blue Beetle (aka Big Blue)
& Sparky
Cyclone
The Flame
The Grim Reaper
RocketMan & RocketGirl
(aka the Zip-Jets)
Samson & David
V-Man
YellowJacket (aka Jack)
at
Lost Heroes of the Golden Age of Comics™!
(Unfortunately, neither Black Venus nor The Hood had solo cover appearances, so we don't have anything on them...yet!)