Thank You for Your Halloween Orders! 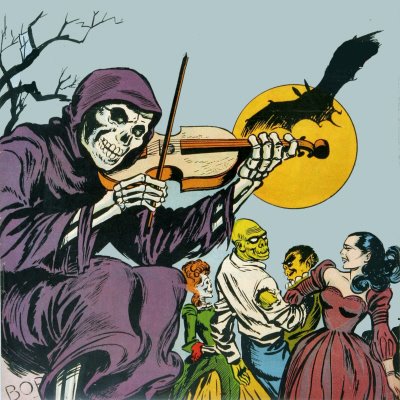 We at Atomic Kommie Comics™ wanted to say 'thank you" to all who ordered our ghoulish goodies and creepy collectibles for Halloween!
It's nice to see so many like-minded monsters and creatures out there! ;-) 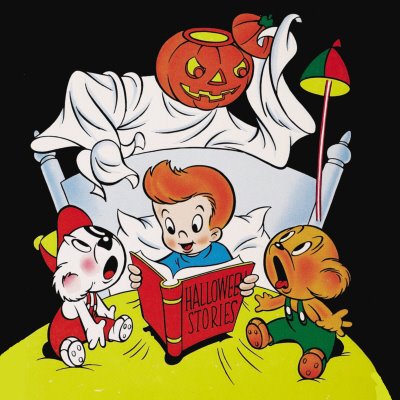 Normally, we do a new Design of the Week on Friday.
Not this week.
A much more important matter takes precedence.
Breast Cancer.
More than 50 of King Features Syndicate's comic strip artists did their Sunday, October 10th 2010, strips with a pink color theme, a mention about fighting breast cancer, or both.

Besides the strips themselves, King Features produced a line of kool kollectibles using the art from those strips that you can order HERE.
A percentage of each product's cost goes directly to breastcancer.org to pay for cancer research.
For more info, and to see the complete set of strips from 10/10/10, go HERE.
Design of the Week will return next week.
Posted by Britt Reid at 10/22/2010 12:59:00 AM No comments:

is both a critical look at the comics series which went thru a radical shift in tone from it's inception in Prize Comics to it's own title.
This large-format book lovingly reproduces a (dare we say?) monstrous number of stories from the original 1940s and '50s comic books, supplemented by an insightful introduction with rare photos of the artist, original art, letters from Dick Briefer, drawings by Alex Toth inspired by Briefer's Frankenstein-and much more!
Interestingly, the book was originally going to have a cover featuring the earlier humorous version of the character...

...but it was apparently decided the later, "horror comics" version would sell better.
We recently covered the character's comics run on this blog.
And, we love Briefer's work so much, we've given it major play at Atomic Kommie Comics™!
He has his own section in Lost Heroes of the Golden Age of Comics™ with a plethora of goodies including a 12-Month Calendar (which includes a dozen covers from both the humorous and horror incarnations of the comic), t-shirts, hoodies, mugs, iPad/messenger bags and much more!

Plus his kool-ghoul logo is part of the Comic Cover LogoWear line!

And, the startling image used on the cover of Dick Briefer's Frankenstein

is also Frankie's entry as one of the Lost Heroes Icons™!

For the Frankie fan in your life, what could be kooler than a gift set combining the book with any of our collectibles?
The perfect thing for Halloween, a birthday, or the upcoming Christmas/Hanukkah holiday season! 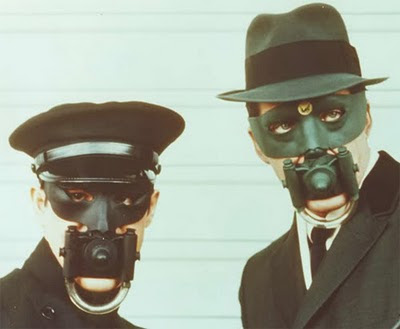 Since The Green Hornet was a weekly show, rather than twice-a-week like Batman, the producers wanted to avoid two-part or continued stories.
However, whether the original concept was to do an hour-long show, or the story editors were unaware of the edict when they solicited scripts, there were several shows that ran an hour.
This was the first one.
Peter Eden is a criminal posing as the owner of a health spa to the rich and famous called The Vale of Eden. Using subliminal motivation via "sleep teaching" to make his clients steal from their own companies and families, turn the loot over to him, and then forget all about it, he's created the perfect method to commit crimes and let others take the blame.
The Hornet (as Britt Reid) and trusty Girl Friday Lenore Case go "undercover" to investigate the spa. Eden becomes suspicious of them, and "programs" Casey during her spa treatment to shoot Reid.
When Casey tries to carry out her programming, only Kato's quick action saves Reid from being killed by his own secretary.
SideNotes:
This is the only episode written (actually co-written) by one of the Batman tv series writers.
The basic concept of a spa being a cover for a criminal operation hypnotizing/programming innocents to commit crimes was also used in the movie In Like Flint

and the final Batman tv series episode "Minerva, Mayhem and Millionaires"
It's also the only episode we see The Hornet and Kato's gas masks (which they just test, but not use). Considering how often they use gas, either from the Black Beauty's grille-gun or the Hornet's pistol, I'm surprised the masks weren't seen more frequently. You'll note in the photo above they're also color-coordinated for the Hornet (green) or Kato (black/midnight blue).
There's lots more location shooting since the finale involves stealing the proceeds from a racetrack and the duo in the Black Beauty pursue Eden's henchmen in an armored car all over the place; thru the stables and onto the track itself!
Here's the SEVENTH and EIGHTH broadcast episodes "Beautiful Dreamer I & II" in six segments.
There's no "teaser" for part 2 at the end of part 1, and no "synopsis" of part 1 at the beginning of part 2, which starts at the opening credits with no pre-credits sequence. They do exist, and, I got them on audio tape, when I recorded them off tv in the days before VHS and DVD. The syndicated prints that Michelle66 digitized her files from probably omitted them since most stations ran the 26-episode series as a one-hour block once a week, thus the preview and synopsis were unnecessary since the eps ran back-to-back, and by leaving them out, a couple of minutes of commercials were added without cutting into the episodes themselves.
Enjoy. 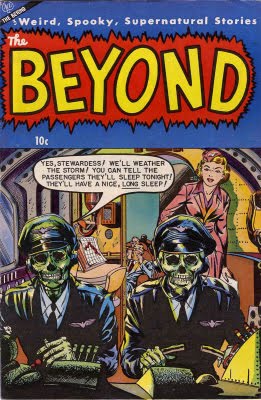 Since it's almost Halloween, here's a slew of classic horror comics covers, courtesy of your dear fiends at Atomic Kommie Comics™.
(And, did we mention they're all available from us on various collectibles?) 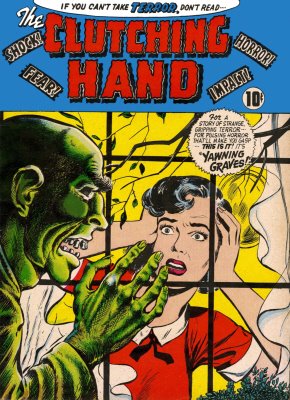 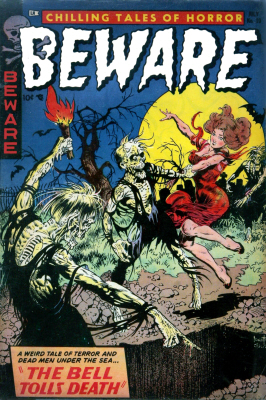 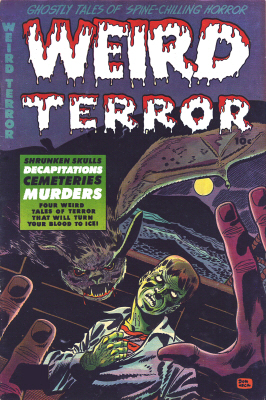 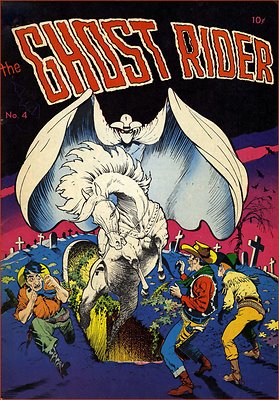 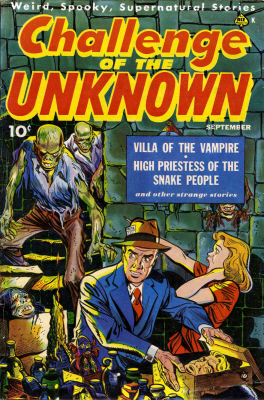 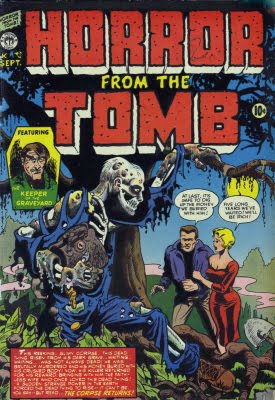 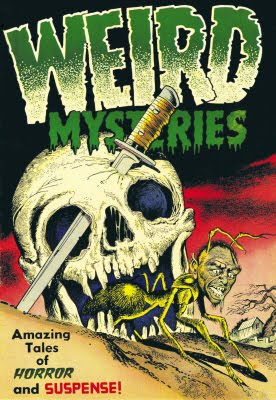 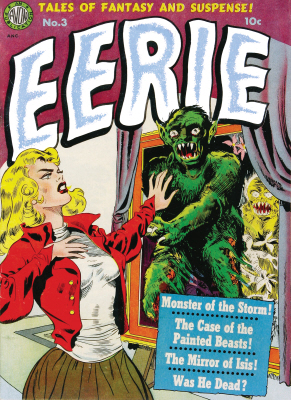 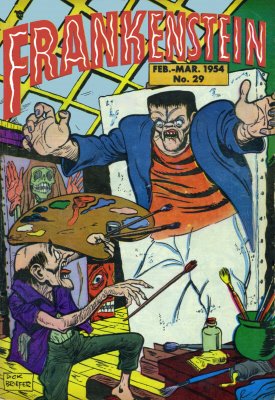 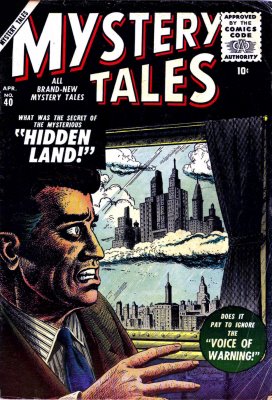 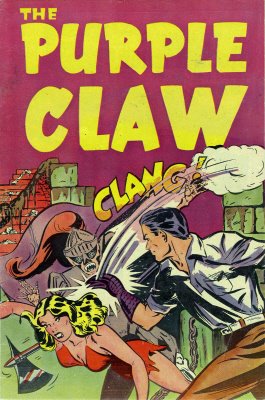 Night of the Living Dead, Astro Zombies, and MORE 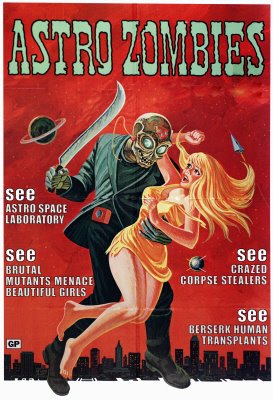 Ah, Halloween...
One of our favorite times of the year here at Atomic Kommie Comics™!
What better time to promote our ghoulish goodies, including black hoodies, tote/trick-or-treat bags, and mugs at Seduction of the Innocent™?
SEE: the moody moonlit graveyard of the full-color Italian poster for the original Night of the Living Dead!
SEE: the kitchy graphics of the rarely-seen Astro Zombies poster (believe it or not, the film was PG)!
SEE: the koolest ghoul of all...Vincent Price, on the classic poster for the original House on Haunted Hill?
And let's not forget
The Green Slime!
Last Man on Earth AND Omega Man!
The ORIGINAL Demon Barber of Fleet Street!
I Married a Monster from Outer Space!
The ORIGINAL Little Shop of Horrors!
Occhio de Uccide!
They Came from Beyond Space!
AND (You knew we had to have this one) Plan 9 from Outer Space!
Make a kool-ghoul gift set for your horrible hubby, wicked wife, boyfiend, or ghoulfriend with one of our collectibles and the dvds shown below!
Buy them! Trade them! Collect 'em all!

If you haven't already visited the blog, hit Pulp Sunday during it's 31 Days of Halloween.
Hot artist Francesco Francavilla, who's presently working on such iconic characters as The Batman, Daredevil (and The Black Panther), The Lone Ranger, The Green Hornet, and Zorro (see a pattern?) is presenting a daily feature in October of illos rendering classic movie monsters and horrors in pen and ink!
Miss it NOT!
Posted by Britt Reid at 10/17/2010 12:14:00 PM No comments: