The female entries at Hero (& Heroine) Histories™ have proven so popular, we've decided to spin-off the women into their own weekly blog.
The first entry features the relatively-unknown character Aurora of Jupiter... 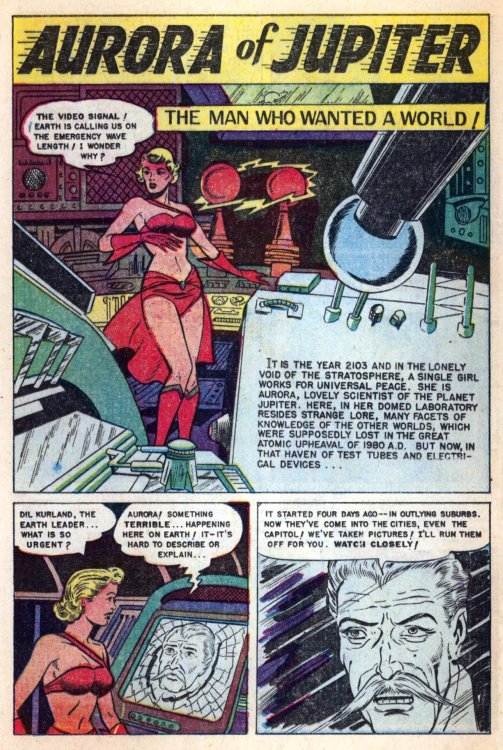 ...who only appeared once, in the HTF Captain Rocket #1 (1951)!
Note: We're continuing the ongoing Phantom Lady and Jet Dream strips in Hero (& Heroine) Histories™, but any other femme-oriented material is now slated for Heroines™!

We jump forward three years in real time and centuries in fictional time... 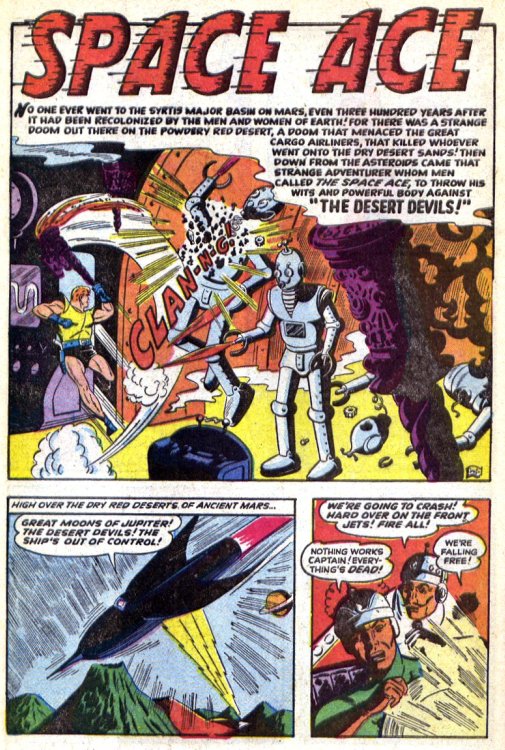 ..to bring you the totally-different, all-new (at the time) Space Ace! 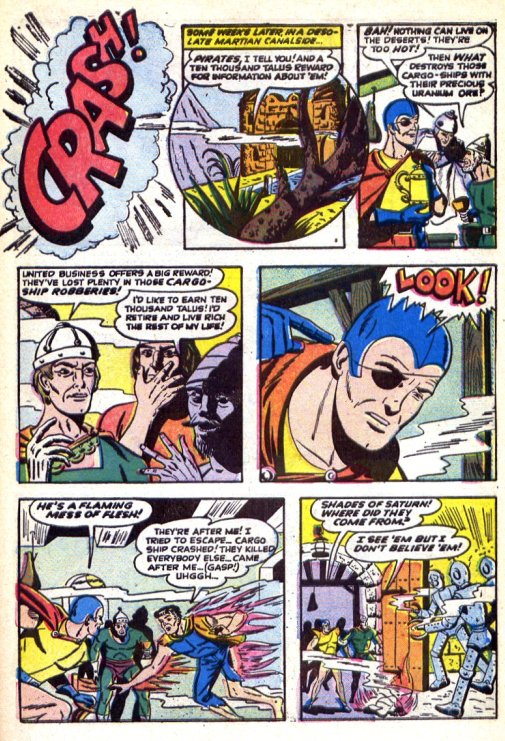 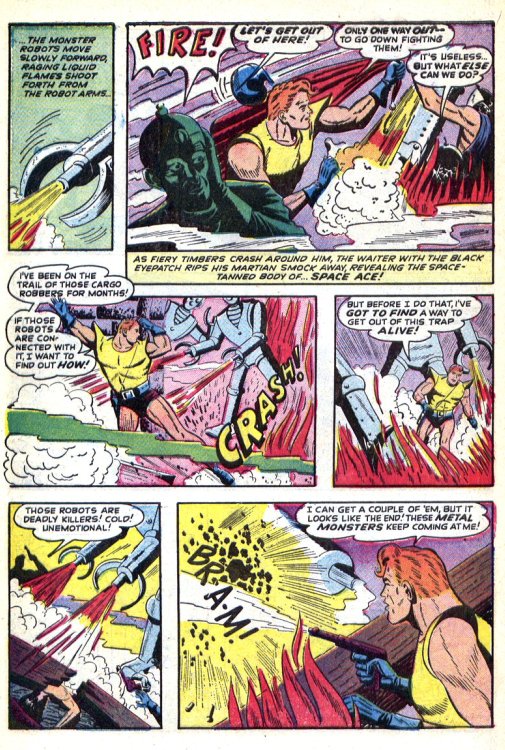 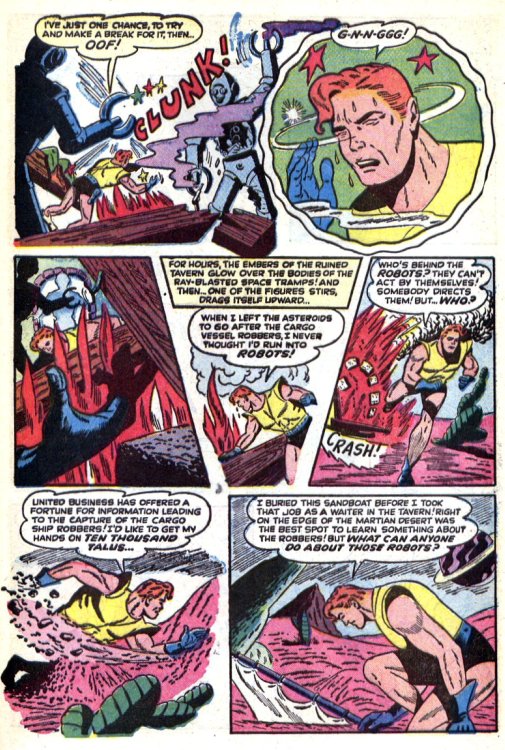 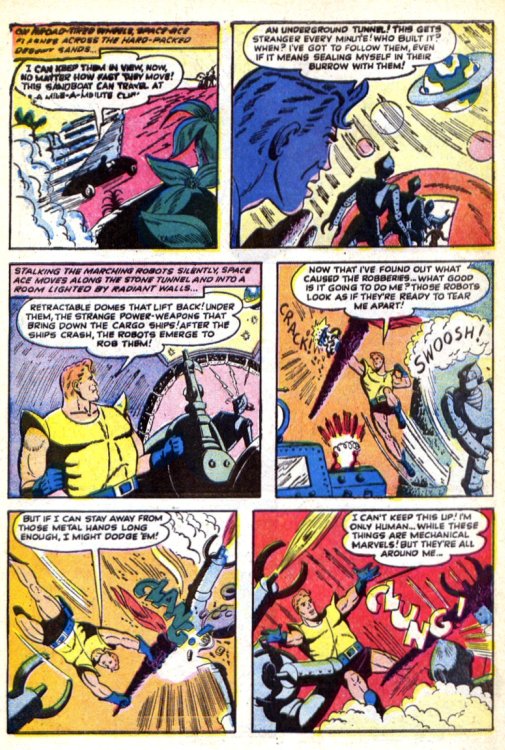 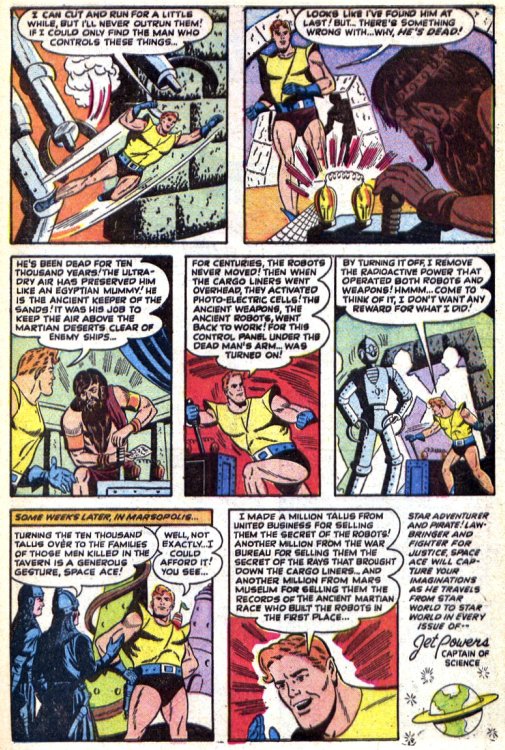 Compare this with the previous version of Space Ace, and you'll really see the differences!
And people bitch about Marvel and DC's now-constant rebooting of their characters!
It's been going on since comics began, just not on such a large scale!
After the last Space Ace strip in Manhunt #7 (1947), the name was revived for a new strip appearing in a new sci-fi themed title...Jet #1 (1950), with few elements (like the Mars colony setting) retained, but moved several centuries further into the future, and with a new, freelance crimefighter instead of a policeman with sidekick.
And, you'll note the almost-medieval clothing and armor most of the colonists now wear and buildings that look like stone castles, as opposed to the high-tech garb and structures in the previous tale!
They also decided to  play up the fact that humans would be almost super-human under Mars' lower gravity, resulting in some very Superman-esqe panels!
Speaking of Superman, the extremely-Wayne Boring-style art is by little-known artist Lawrence Woromay, whose comics career spanned the 1950s and 1960s and various genres including sci-fi, war and horror.
But this version of Space Ace wouldn't even last as long as his predecessor!
His next (and last) appearance will be presented Monday.
Support Small Business!
Visit
The Future WAS Fantastic!

This is the last story of the first of three incarnations of Space Ace by the same publisher... 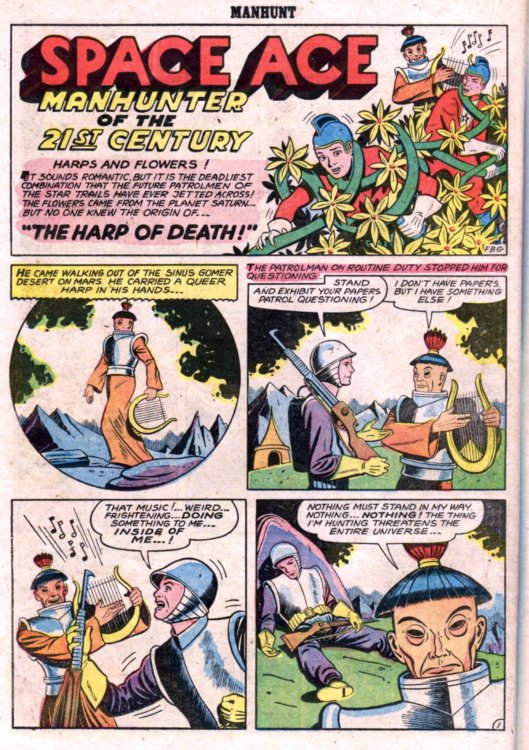 ...none of whom have any relation to the 1980s video game character! 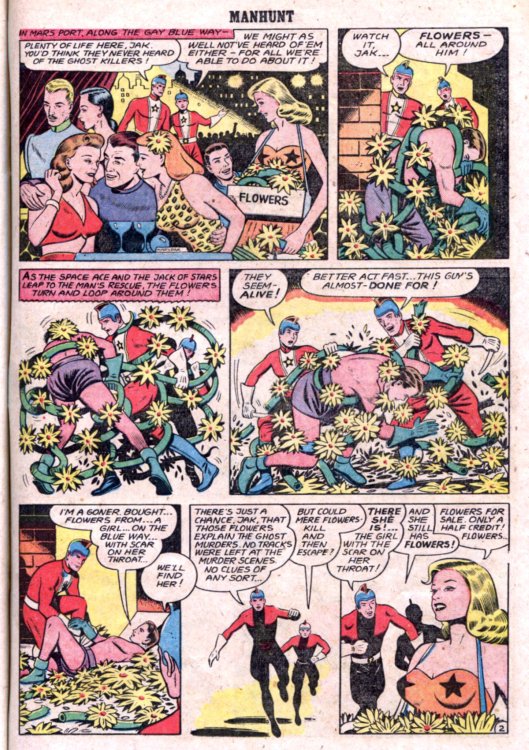 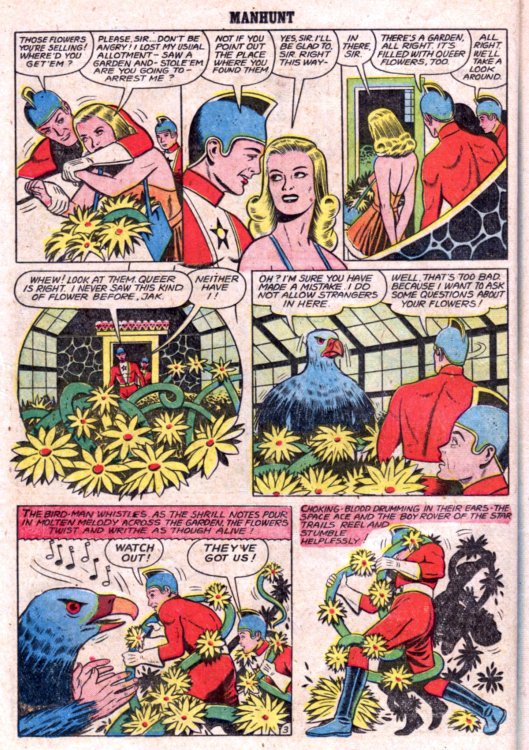 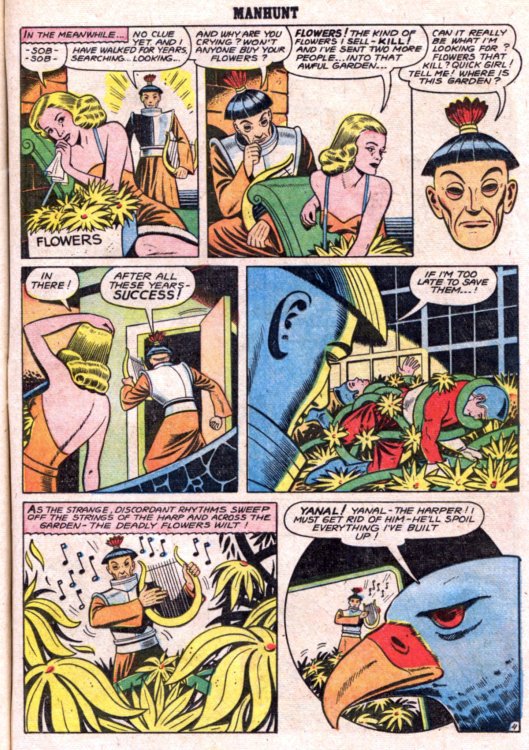 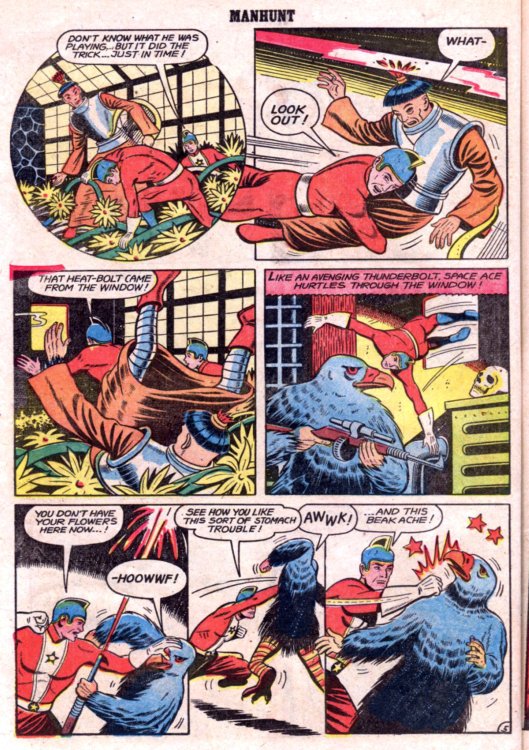 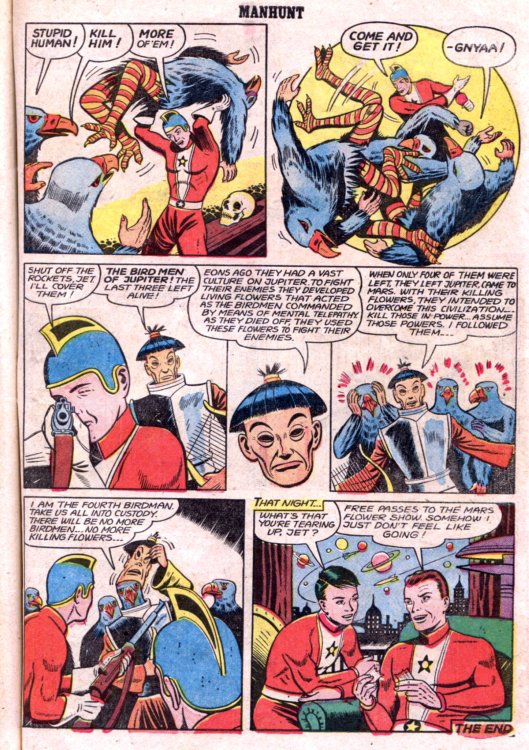 While it's not confirmed as to who wrote the tale from Manhunt #7 (1947), it's clearly illustrated by Fred Guardineer, creator of numerous Golden Age characters including Zatara, Tor the Magician (both of whom spoke their incantations backwards), Blue Tracer, Alias the Dragon, and Moon-Man.
This 1930s-40s Buck Rogers-style character ran in the first seven issues of Magazine Enterprises' Manhunt anthology comic, which featured law enforcement officers past, present, and future.
As of #8, Ace was replaced by a Western hero, Trail Colt, and the ManHunter of the 21st Century wouldn't be seen for a couple of years.
When he did reappear, he was (literally) a new man...as we shall see tomorrow...

If Austin Powers had a sister in the Swingin' 60s, she would have been... 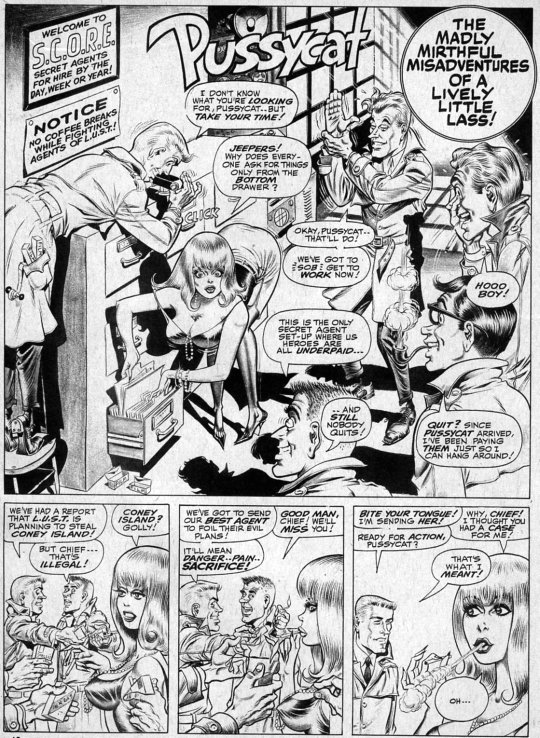 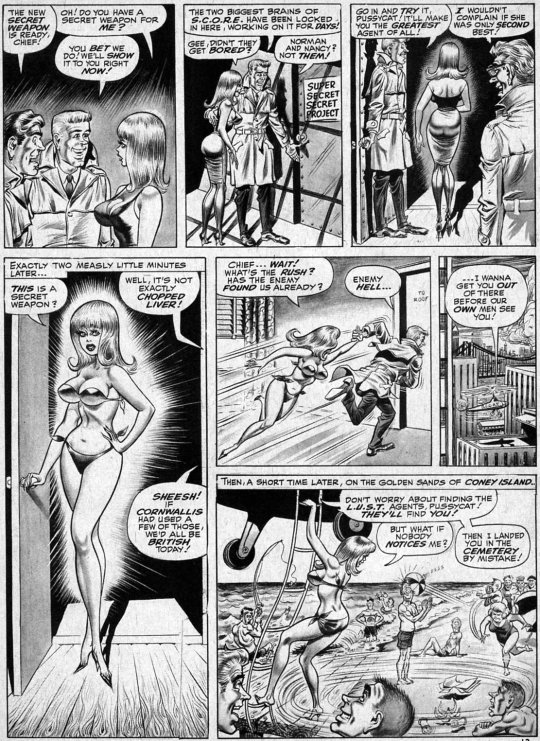 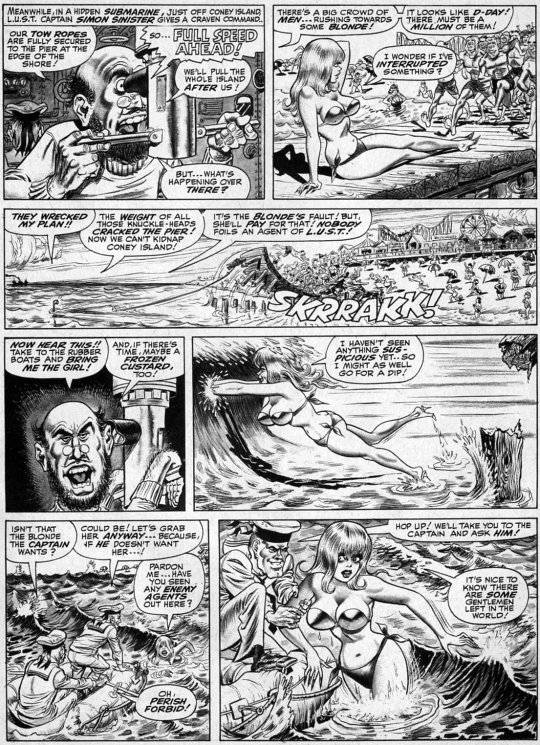 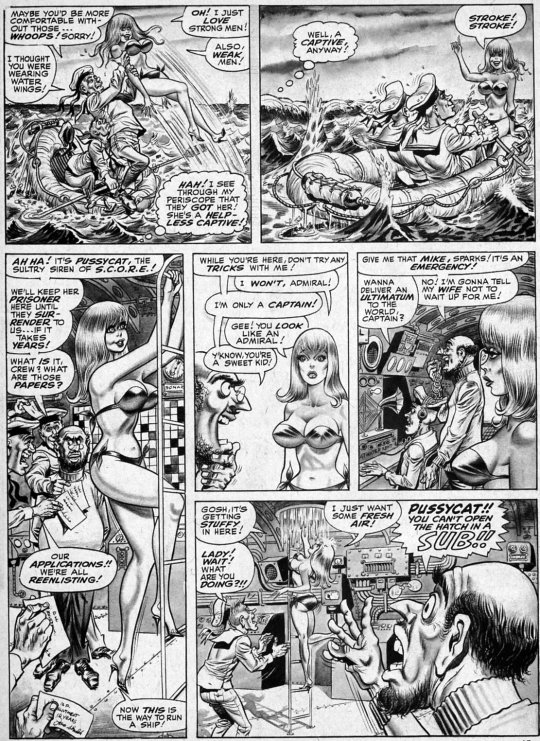 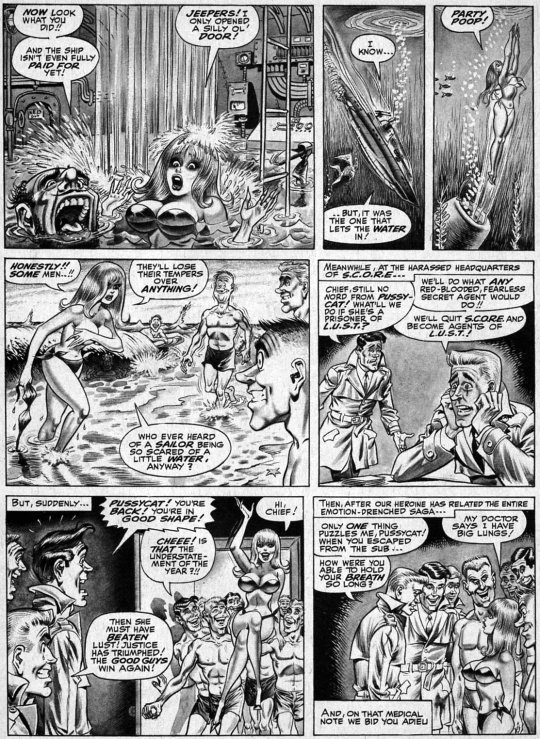 This tale originally appeared in Male Annual #4 (1966), but this is from the one-shot PussyCat (1968) that reprinted her stories from the various "laddy" magazines published by Martin Goodman, who also owned Marvel Comics at the time.
The writer is officially-unknown, but the scripter is probably Stan Lee or Larry Lieber, and the artist is pretty clearly good-girl legend Bill Ward with inking by Bill Everett.
Support Small Business!
Visit Our

Our old friend, Francesco Francavilla, has a new series out this week...

The Battle of Riverdale!

All is not peaceful in Riverdale...
...as fighting among the second generation of owners of Archie Comics hits new highs in nastiness even as Archie Andrews and his ensemble hit new heights in popularity, as seen in a feature New York Times article HERE!
(Ironically, I was on-staff at the only other family-run comics company, Harvey Comics, during their final collapse and dissolution in 1988-91, and while it didn't hit quite the levels seen in this article, it was lively as the children of the three founding brothers fought and squabbled among themselves while the staff [myself included] kept our heads low and produced the books.)
Read the article, it's wild!
Posted by Britt Reid at 4/15/2012 04:45:00 PM No comments: