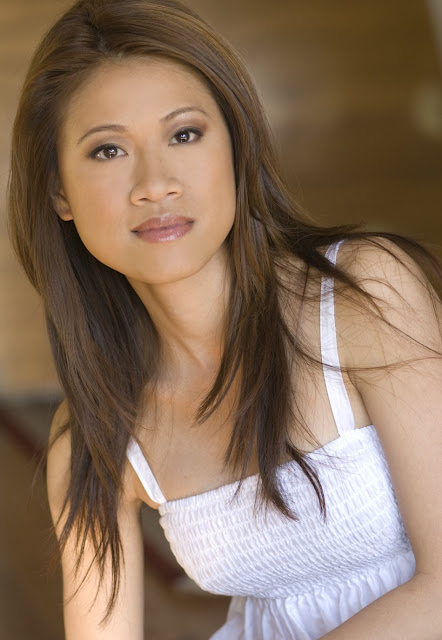 She's talented!
She's cute!
She's controversial!
She's Junie Hoang, and she's complaining that her career was ruined by the Internet Movie Data Base (IMDB) because they revealed her real age!
She's 41, and doesn't look it!
While she's never had a big break, Junie has been working pretty regularly since 1992, including a lot of animation voice work!
She even voiced Chun Li in Street Fighter 2: Victory!

We wish you the best, Junie, and hope to see (or hear) you on the screen soon!

The New Miss Moneypenny in Action! 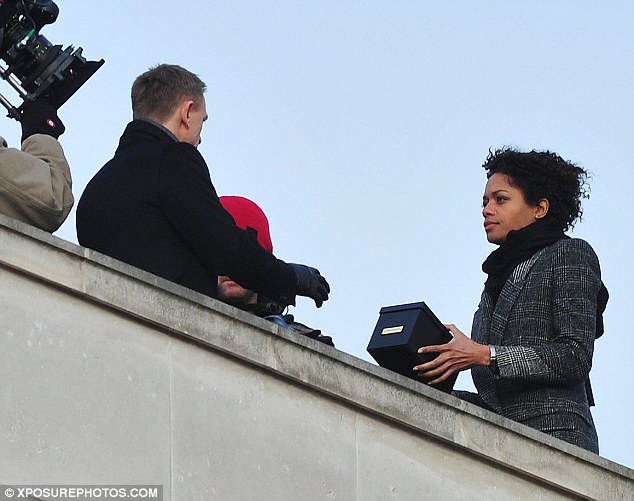 Naomie Harris as "Eve" aka Miss Moneypenny in a scene with Daniel Craig as James Bond.
Whether "Eve" is a code name or Moneypenny's first name is unknown at this point.

None of the previous Bond novels or films give her a first name, though a spin-off novel series, The Moneypenny Diaries, does..."Jane".

Moneypenny didn't appear in either of the previous Craig James Bond 007 movies Casino Royale, which rebooted the series from the early days of Bond's spy career before he received his "00" designation and license to kill or Quantum of Solace.
(Note: Moneypenny did appear in both the novel and 1967 movie versions of Casino Royale.)
Posted by Britt Reid at 1/06/2012 12:08:00 PM No comments:

When Last We Left Our Heroes... 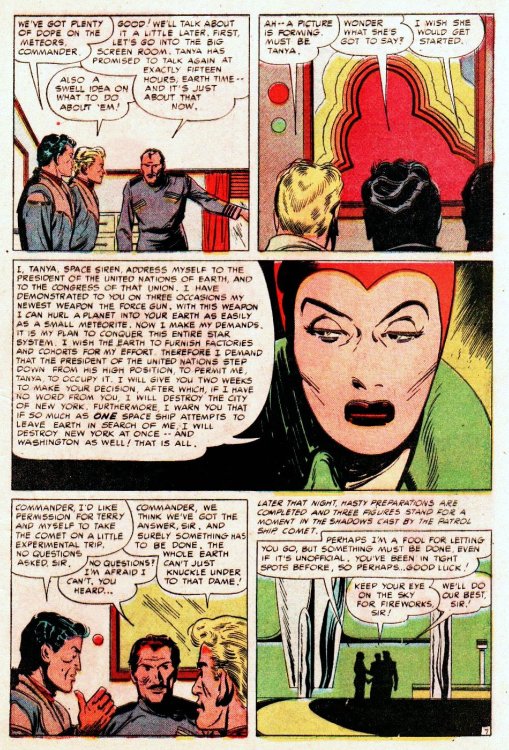 The Space Siren, after destroying several Earth landmarks (including Yankee Stadium II) with meteors, demands Earth's surrender lest she rain fiery death upon the planet! 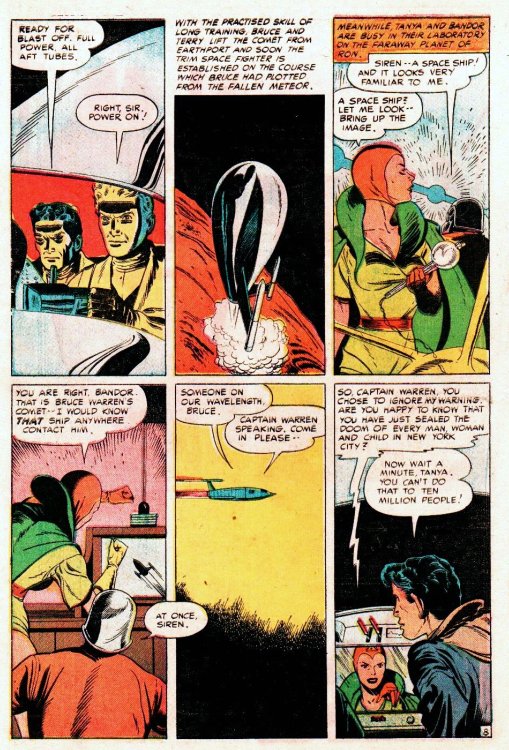 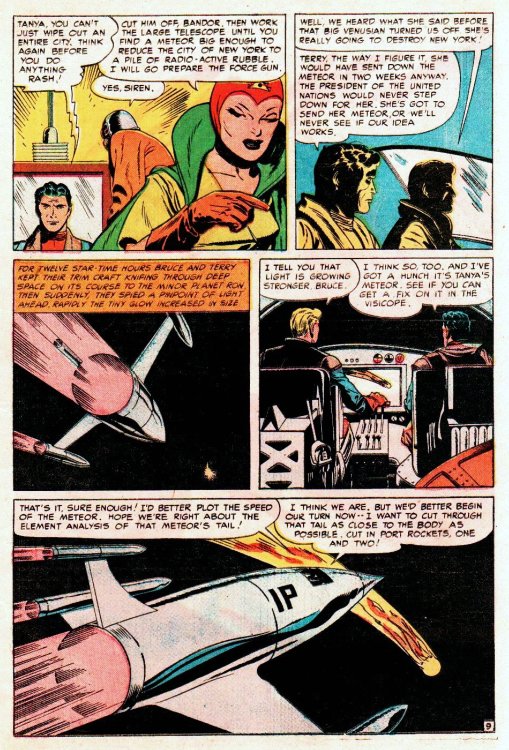 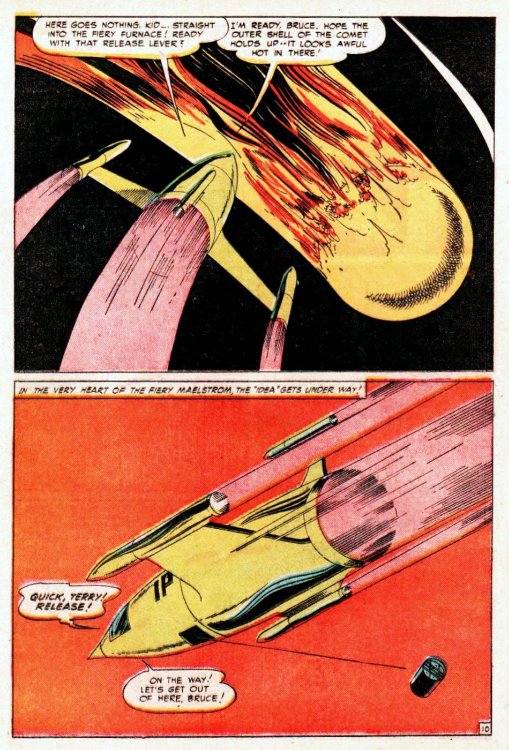 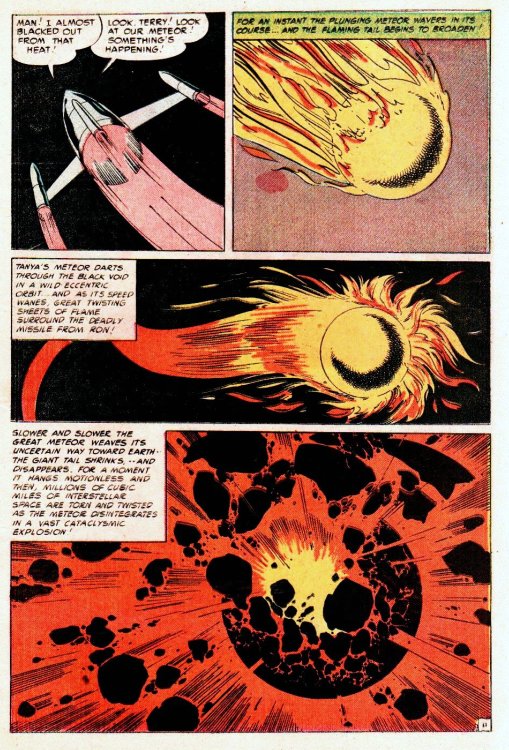 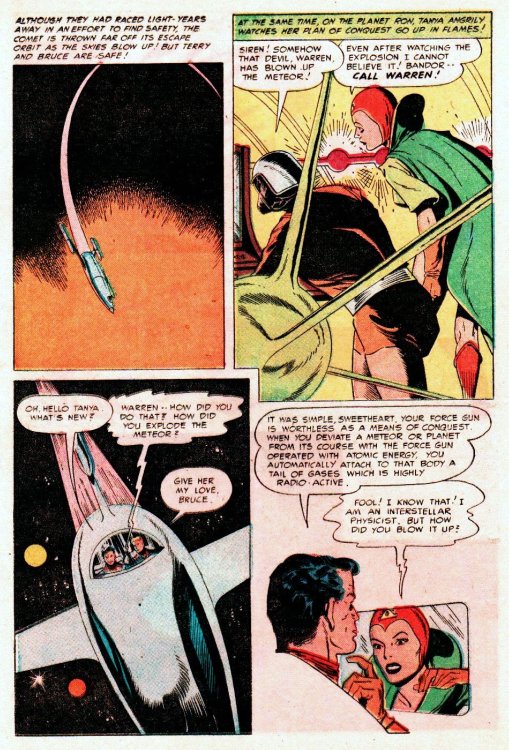 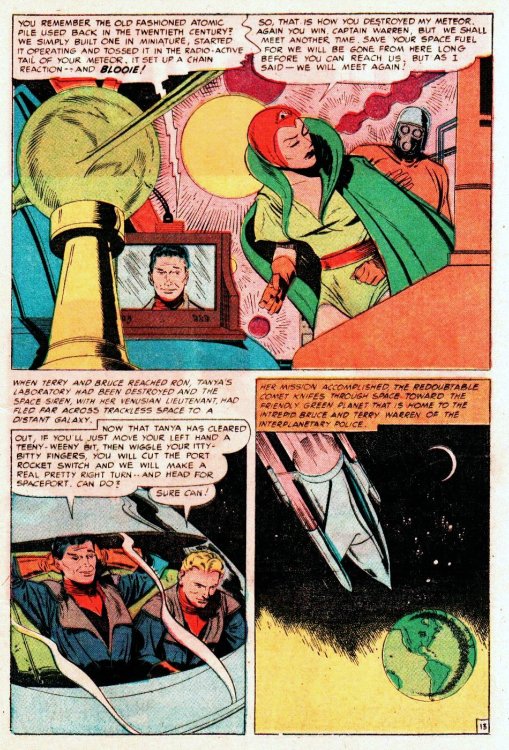 While the peacekeeping organization is called the "Interplanetary Police" in the first three tales, it becomes the "Interstellar Police" for the last two!

Writer Hobart Donovan was the writer for the Buster Brown radio show this comic was spun-off from.
He wrote all the stories in the comic book, from sci-fi to western to funny animal!
Donovan was married to actress June Foray, best known as the voice of Rocky the Flying Squirrel!

Artist Ray Bailey began as an assistant to Milton Caniff on Terry and the Pirates and Male Call.
When Canniff left Terry and began Steve Canyon, Bailey went with him.
Finally going independent, Bailey launched several comic strips including the short-lived Vesta West, and Bruce Gentry, an aviation strip with sci-fi elements which was popular enough to have a 1940s movie serial based on it which features the first appearance of a flying saucer in the movies!
In the early 1950s, he was the artist on the Tom Corbett: Space Cadet newspaper strip at the same time he did the first two tales of this series.

Who would've thought that this never-reprinted, lost classic comic series appeared in... 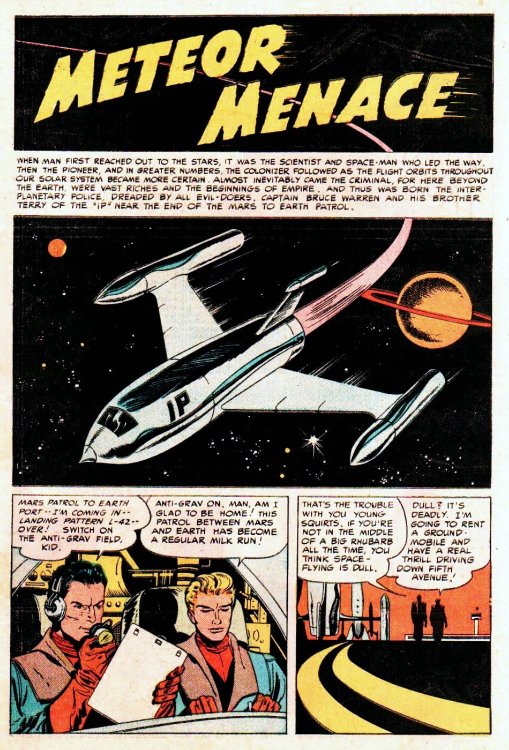 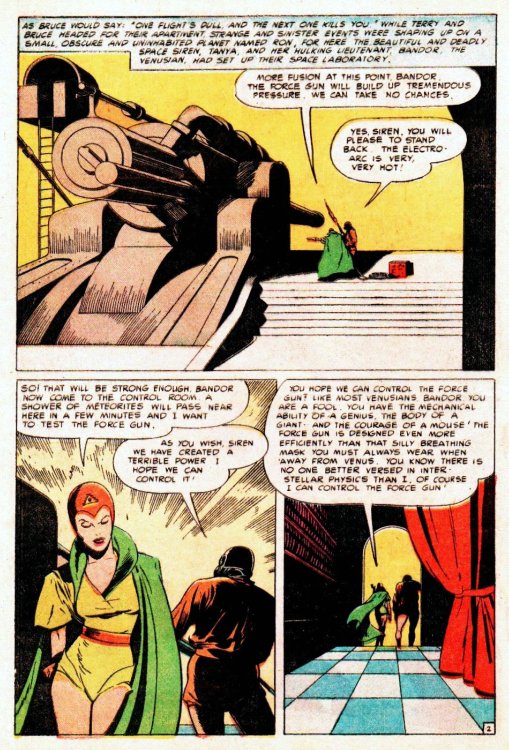 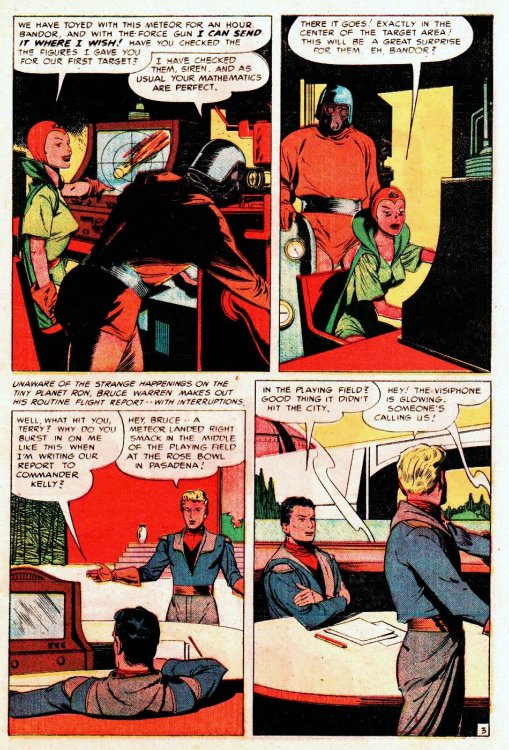 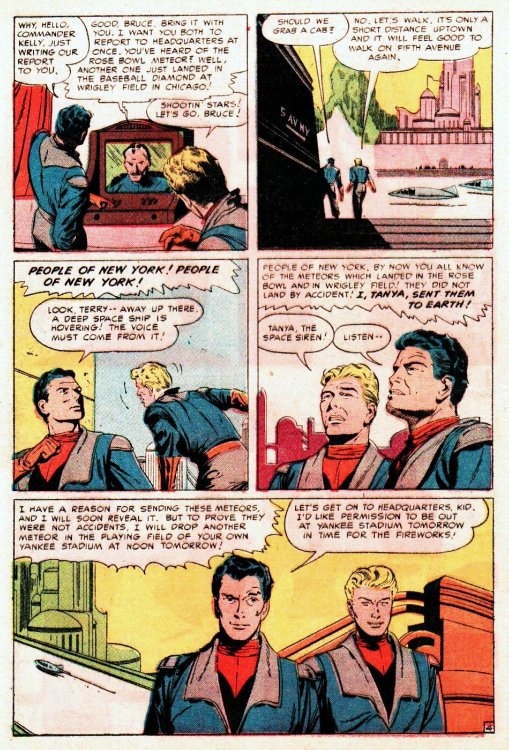 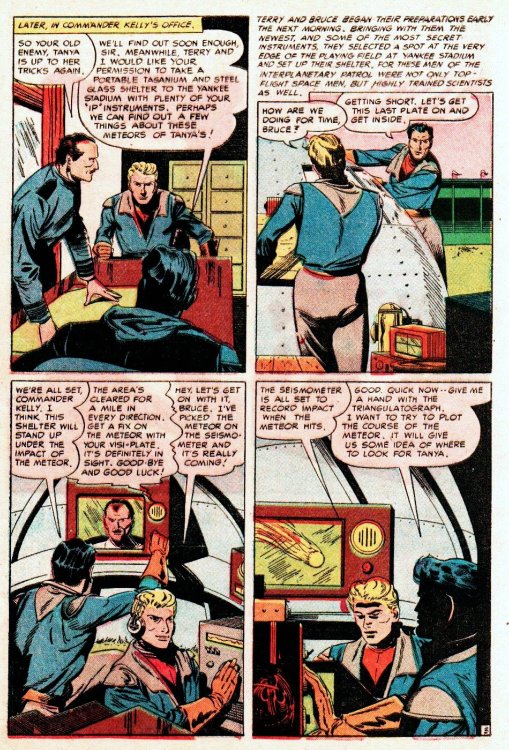 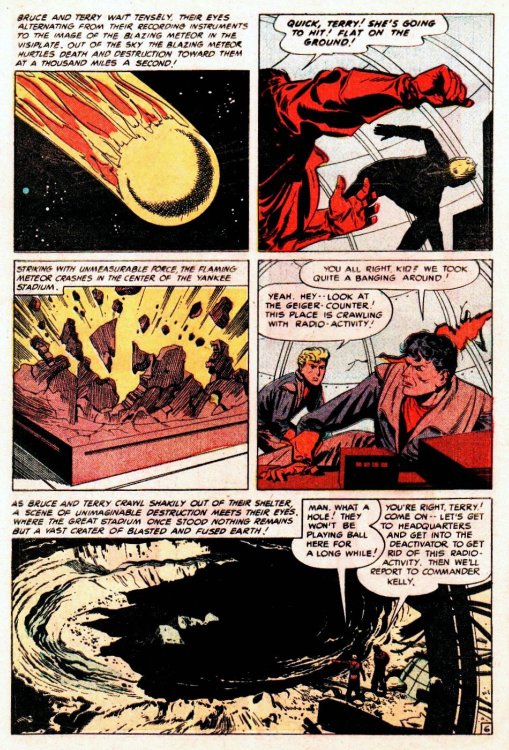 THEY BLEW UP YANKEE STADIUM!
Of course, it's actually Yankee Stadium II, but readers in 1952 didn't know that...
Be here tomorrow for the planet-shattering (literally) conclusion!
(One spoiler...the Space Siren doesn't destroy any more historic stadiums!
Relieved?)
This short-lived series (only five stories) ran in Buster Brown Comic Book, a giveaway anthology comic published quarterly from 1945 to 1956 to promote Buster Brown Shoe Stores.
Strips ran anywhere from three to twenty four issues.
Since there were no letters pages, there's no way to tell how the popularity of the series was judged.
This tale in BBCB #28, written by Hobart Donovan and drawn by Ray Bailey, is the premiere, setting up the premise quickly and efficiently, adapting elements from various other series including Buck Rogers and Space Patrol, and getting to the action post-haste.

One of the benefits of the blog's redesign is to show art larger than before... 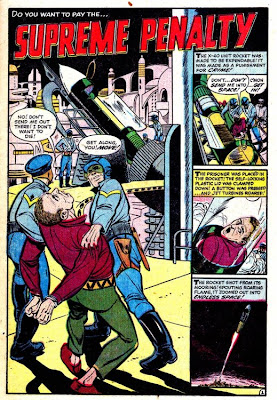 Before, when you had to click to enlarge the art... 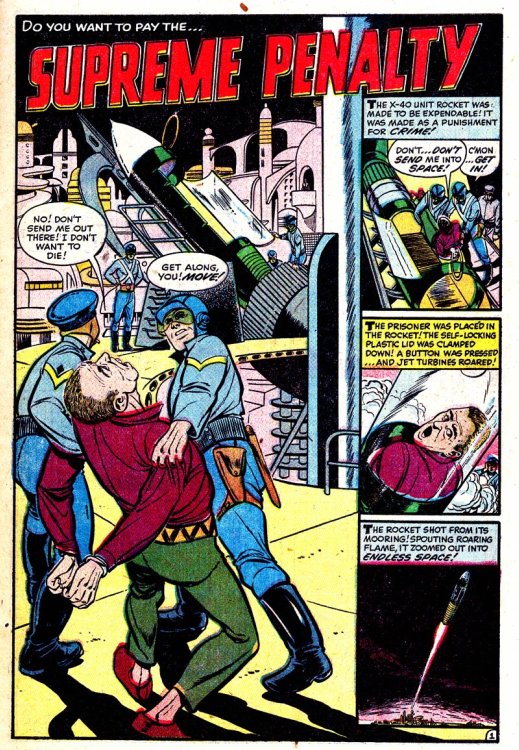 Now, no clicking required!
I'm going thru the blog, "repairing" things where needed.
The Reading Room entries (such as this one) are getting priority, since the art can easily be enlarged.
I'll also be updating or redirecting YouTube links that have expired or been deleted by YouTube.
Support Small Business
Visit
The Future WAS Fantastic!

Expanding the RetroBlogs™ family paid off well as the audiences for each specialized blog grew both through search engines and crossover events, including the Lone Ranger (first multi-blog posting of a single storyline), Frankenstein, and most recently, Christmas Comics multi-blog postings.
RetroBlogs™ fans also accounted for more than half of our various Collectibles stores' sales, so, a humble "thank you" for your display of good taste!
The stores account for more than half of our annual income, so your patronage is greatly appreciated.
One of our New Year's resolutions is to reduce the amount of stuff in our condo, so we're instituting a Graphics Swag and One of-a-Kind Collectibles Page at the top of this blog to sell some of the goodies we've accumulated over three decades in publishing (including stints at various comics companies).
Most of the items are industry-only swag or in-house production items like make-readies or cover/page proofs you won't see anywhere else!
Check back every few days for new items!
Posted by Britt Reid at 1/01/2012 04:02:00 PM No comments: