This "too kool for skool" shirt features the poster art for the 1940s movie serial Captain America, who didn't have a shield!
Or a kid sidekick named Bucky!
In fact he wasn't even scrawny recruit Steve Rogers!
He was "two-fisted District Attorney Grant Gardner"!
(The actor, Dick Purcell, died from the strain of performing the role!)
There was no Red Skull!
(But the created-for-the-serial villain, The Scarab, was played by classic b-movie baddie Lionel Atwill at his snarling, sneering, smarmy best!)
The heroine, Gail Richards, was played by one of b-movies hottest ladies, Lorna Gray (who usually played villainesses)!
For more info about the serial, we presented a classic article about it HERE!
As for the highly-collectible shirt itself, it's available in a variety of colors, including patriotic red (shown), white, or blue!
Just the "secret chic" thing to wear to a screening of the new Captain America flick!

Celebrate the 4th of July with Don Winslow! 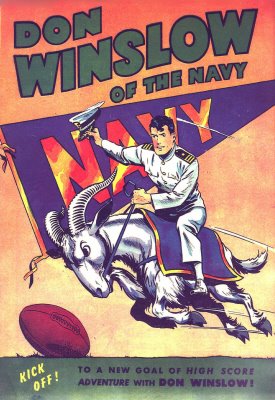 Perhaps the first comic strip to be created as a military recruiting tool, Don Winslow U.S.N. was launched in 1934 to encourage enlistments in the U.S. Navy, which at that point had reached an all-time low.
A clean-cut role model for American Youth, Don battled spies, saboteurs, and criminals on the home front, and even made brief forays to both the Atlantic and Pacific theaters of war!

The strip proved to be a big success, not only improving Naval enlistments, but launching a series of novels, comic book series from several publishers, a dramatic radio show, and two movie serials (Don Winslow of the Navy

and Don Winslow of the Coast Guard

A Free pre-4th of July bonus from us to you: downloadable mp3s of the Don Winslow dramatic radio show!

Reading Room: RACE FOR THE MOON "Garden of Eden" 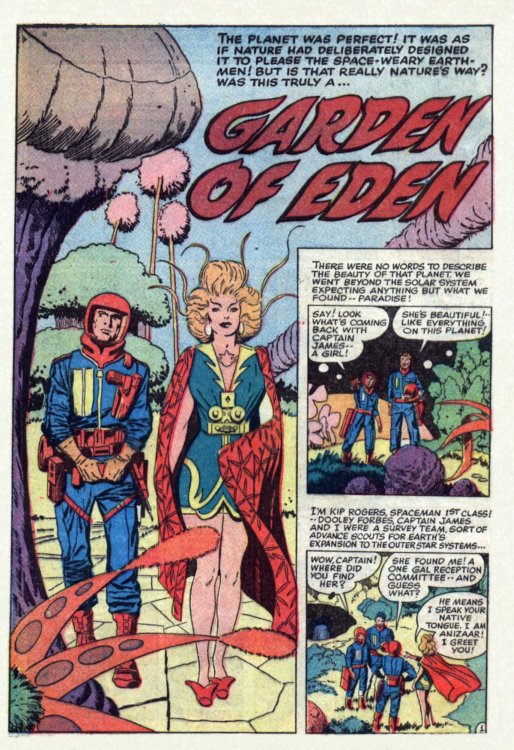 From the final issue (#3) of Race For the Moon comes a tale with spectacular Jack Kirby/Al Williamson artwork combining both realistic 1950s spacesuits and architecture and way-out technology and alien costuming.
Note that the female, Anizaar, looks a lot like Zsa Zsa Gabor in the then-current flick Queen of Outer Space, but in a kooler costume than the simple ones shown in the movie! Trivia: Zsa Zsa didn't play the title role! "The Queen" was Laurie Mitchell!
The story itself is a clever reworking of several science-fiction tropes common to the era (1958).
See of you can identify them all... 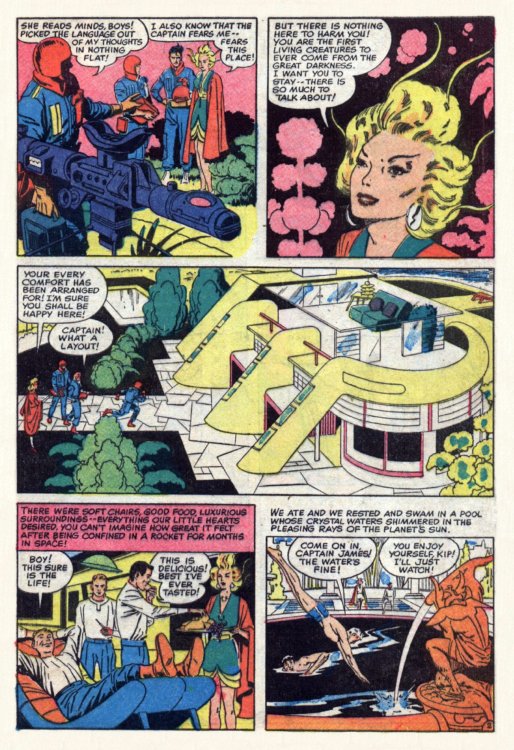 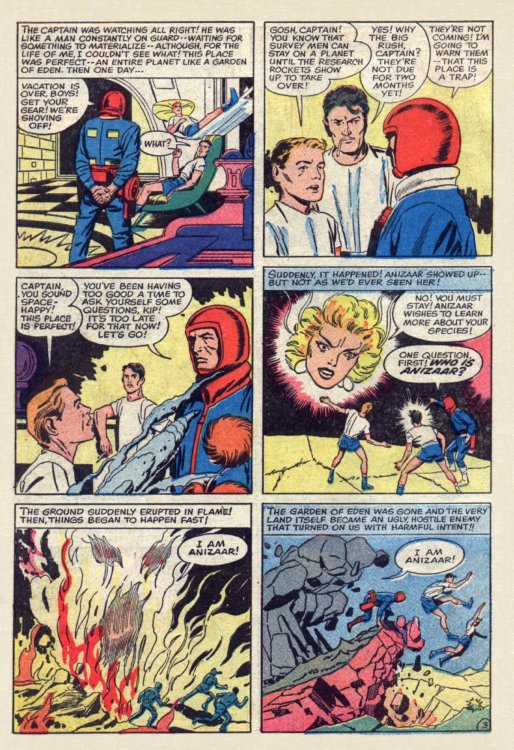 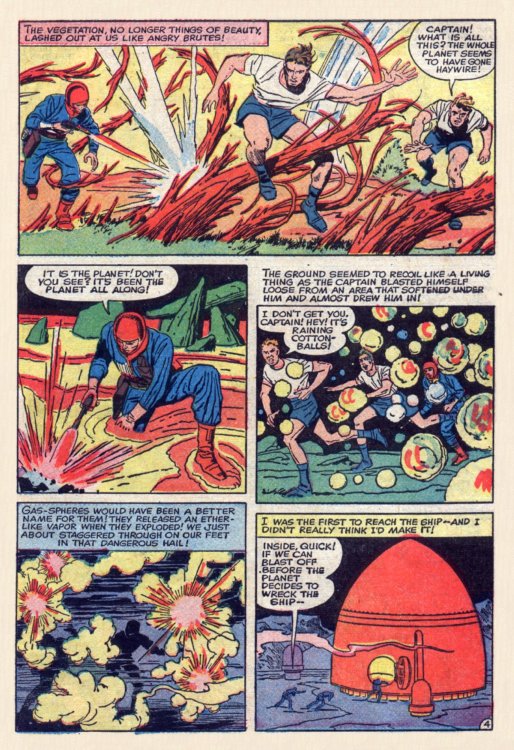 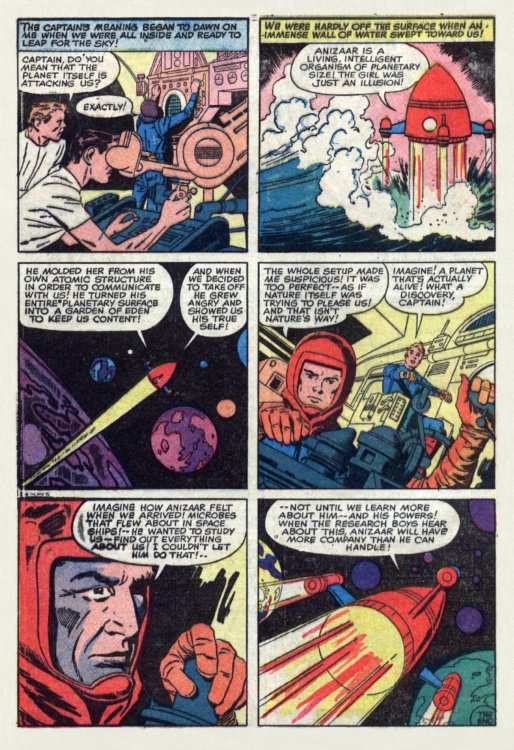 I dunno...while I'm certainly on the humans' side, that last panel sounded like a rather nasty threat...


Check out
The Future WAS Fantastic!

From 1949 to 1958, The Lone Ranger (with Tonto, natch) dominated tv as the Western show for kids.
It was also ABC-TV's first hit series, winning it's time period consistently.
In 1955, it was decided to film the b/w series in color for it's final (1956-57) season.
Before shooting for the season itself began, both a tv special celebrating the character's anniversary and a feature film were shot using the new color equipment. Then filming began on the final season, which also required reshooting all the previous outdoor stock footage (which was b/w).
Ironically, ABC began airing the color-filmed episodes (including the anniversary special) before the movie opened in theatres...but aired them in b/w, so this movie is, chronologically, the character's first color appearance!
Clayton Moore is still considered the definitive Lone Ranger, and Native American actor Jay Silverheels played Tonto as smarter than most cowboys he encountered, despite the character's problems with adjectives.

Here's the trailer from the first movie...
And here's the opening from the second feature film, Lone Ranger and the Lost City of Gold, which synopsizes his origin in two minutes!
(It takes a whole movie to do it these days, and not as well!)
We're presenting these classic clips to alert you to a related Internet first...a serialized story carried across multiple blogs!
We're re-presenting as a 4th of July holiday treat, the 60-page-plus comic adaptation of the 1956 Lone Ranger feature film, illustrated by Tom Gill (with inking by Joe Sinnott), which has never been reprinted!
The first two parts run today and tomorrow at Secret Sanctum of Captain Video™, then parts three and four on July 1st and 2nd at Hero & Heroine Histories™, with the last two on July 3rd and 4th at Western Comics Adventures™!
Join us as we make cyber-history! ;-) 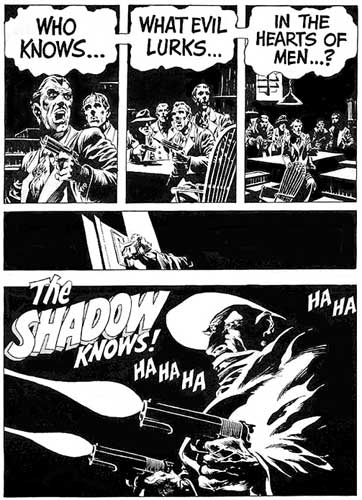 In 1972, both DC and Marvel acquired comics rights to classic Street & Smith pulp characters whose paperback reprints were selling well. (and The Shadow's reissued radio shows were among the best-selling spoken-word record albums and cassettes.) 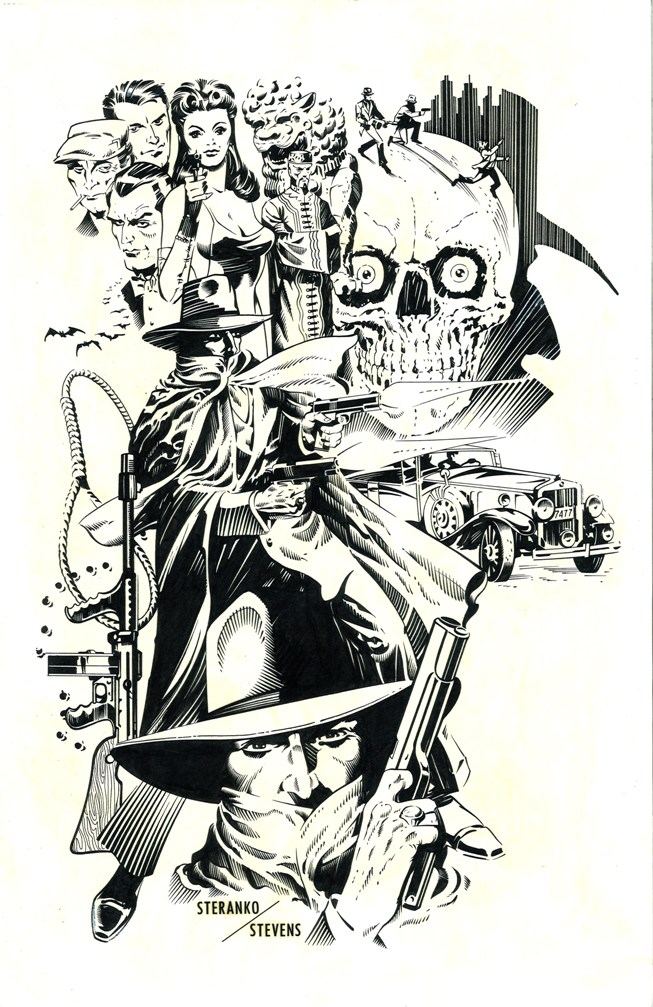 Marvel nabbed Doc Savage and DC picked up both The Shadow and The Avenger. (although Marvel initially claimed to have The Shadow as well...)
Immediately, many big-name artists, as well as up-and-comers, vied for the coveted assignments.
Alex Toth, Jim Steranko, Gene Colan, Berni Wrightson, and Mike Kaluta were among those who submitted test pieces.
Here's two of them.
Wrightson's piece was used as a house ad by DC, and Berni inked an entire issue over Kaluta's pencils, as well as assisting on a couple of other Kaluta stories.
Steranko's pencil piece was reused as the envelope art for his Shadow Secret Society licensed fan club.
This version was inked by the late, great, Dave (Rocketeer) Stevens.
Posted by Britt Reid at 6/28/2011 09:16:00 AM No comments:

One of my favorite cover AND interior artists is Francesco Francavilla, who works in a style conveying both current and classic (Pulp/Golden Age) influences with work that consistently makes me go WOW!
The above cover, one of the alternate covers for the new Dynamite Comics mini-series "Fall of Barsoom" #3, beautifully-evokes the "scientific romance" feel of the early pulps.

and here's one he did just for the heck of it... 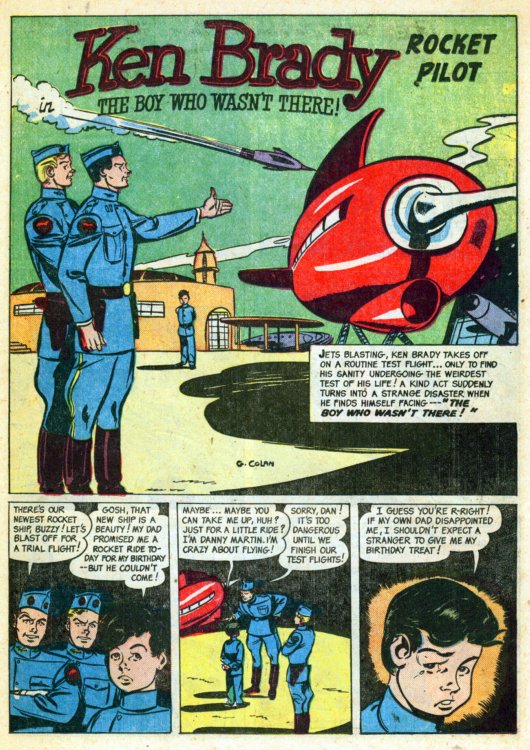 In tribute to the passing of a comics legend, we're going to run both appearances of the first ongoing character Gene Colan co-created (with Superman co-creator Jerry Siegel)
The second, and last, Ken Brady: Rocket Pilot tale from Lars of Mars #11 (1951), the second, and last, issue of the title. 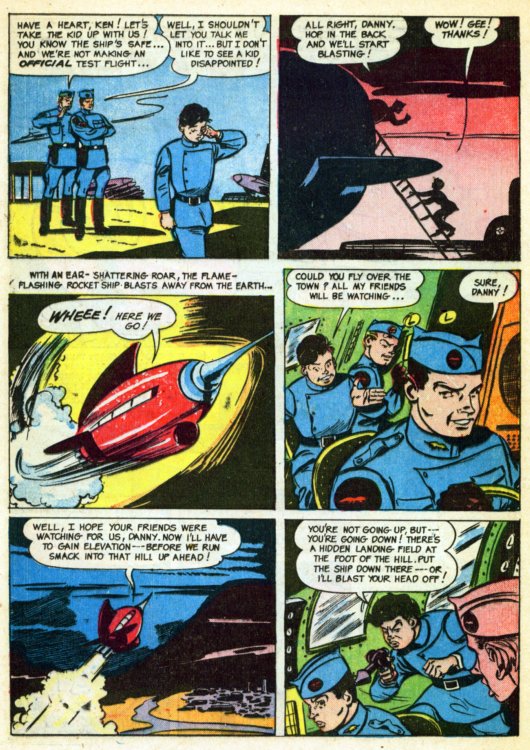 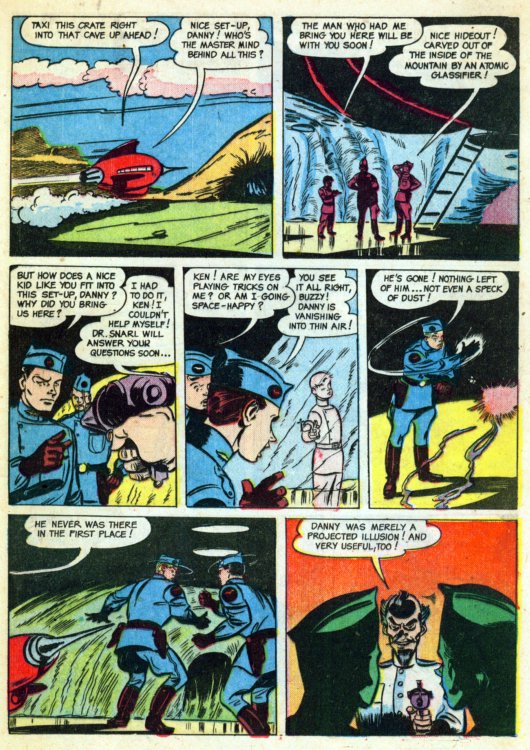 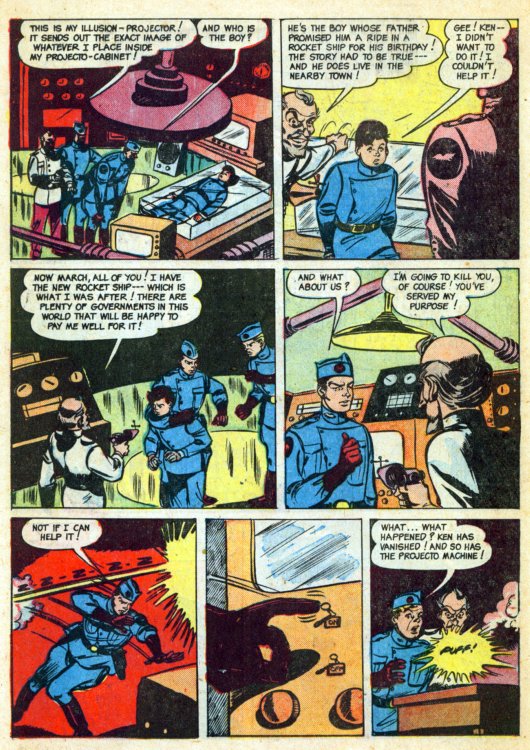 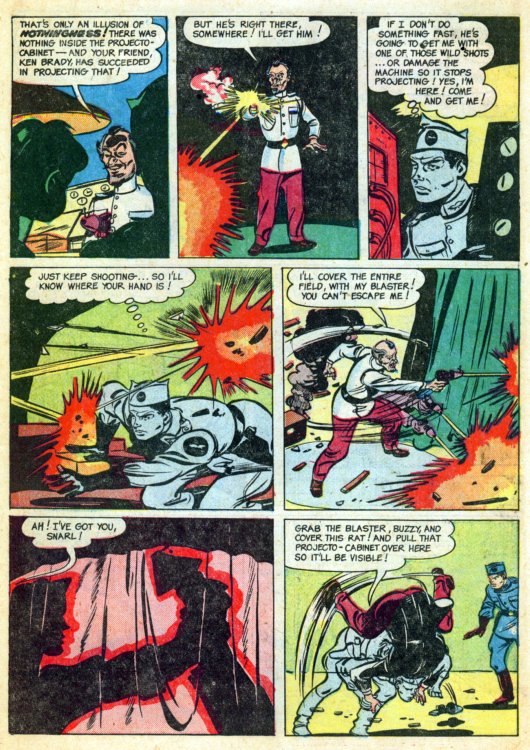 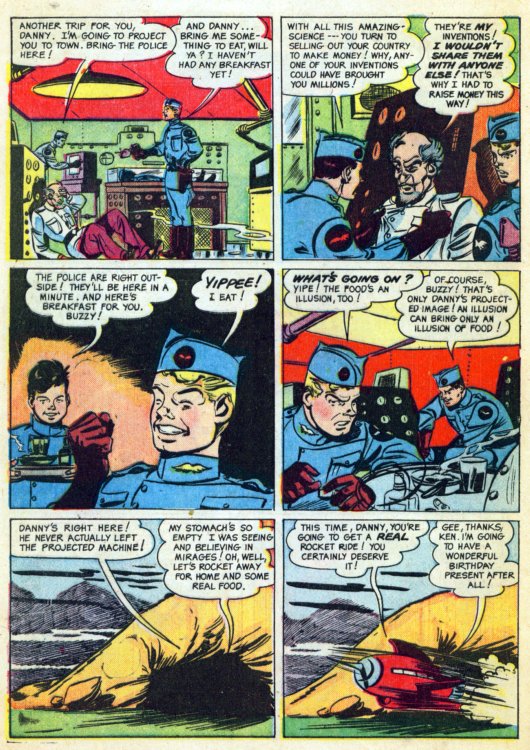 While the series isn't anything particularly innovative, it's a classic example of 1950s-style sci-fi.
And Gene, who was doing a little of everything from horror to romance to Westerns, showed his versatility with this too-brief run.