Design of the Week "United We Stand"

Each week, we post a limited-edition design, to be sold for exactly 7 days, then replaced with another!
This week: A vintage painting showing the WWII-era 48-star flag with a sunrise in the background.
A tad kitschy, but stirring, and a reminder of an America that once stood for Truth and Justice.
The perfect gift for Flag Day (June 14th)!
Posted by Britt Reid at 5/23/2015 10:00:00 AM No comments: 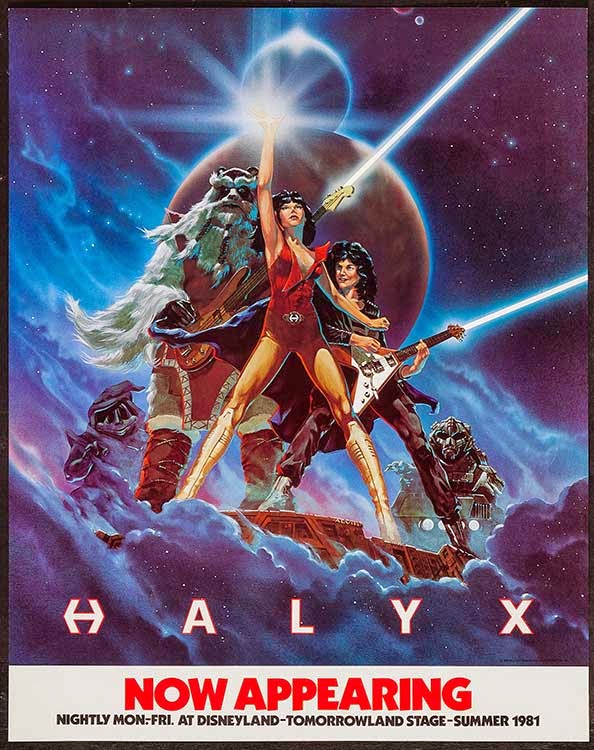 ...they took a shot at doing a Star Wars-style property!
Before the Disney Channel and Radio Disney, the marketers at The House of Mouse would occasionally try to tie-in with popular trends.
Halyx, a pop-rock band that performed at TomorrowLand in the early 1980s was one such attempt.
And, being Disney, it was no half-baked, quickie tie-in, but an example of the Imagineering crew at its' best.
You can read about the creation and implementation of the project (by one of the participants no less) HERE and HERE.
Here's the band performing (audio with still photos)...

Here's some kool posters from the early days of Disneyland's TomorrowLand... 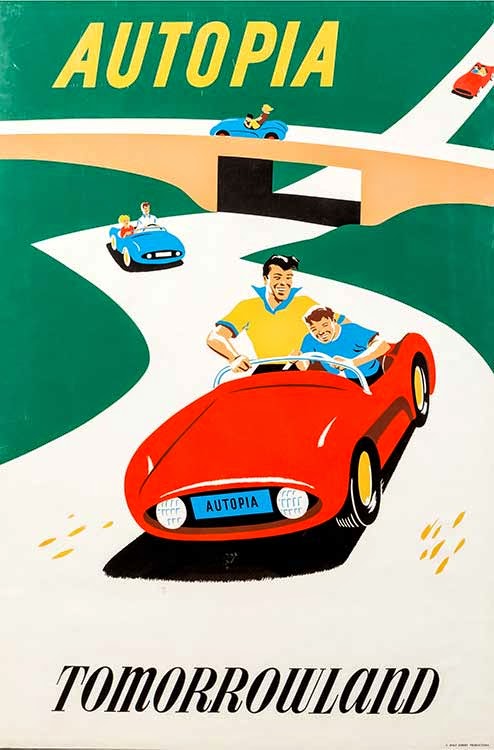 ...giving you a taste of the superb then-futuristic graphic sensibility that dominated the theme park. 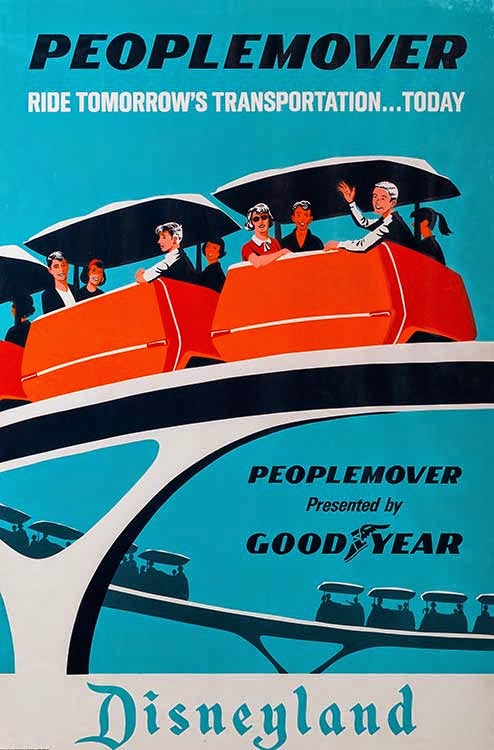 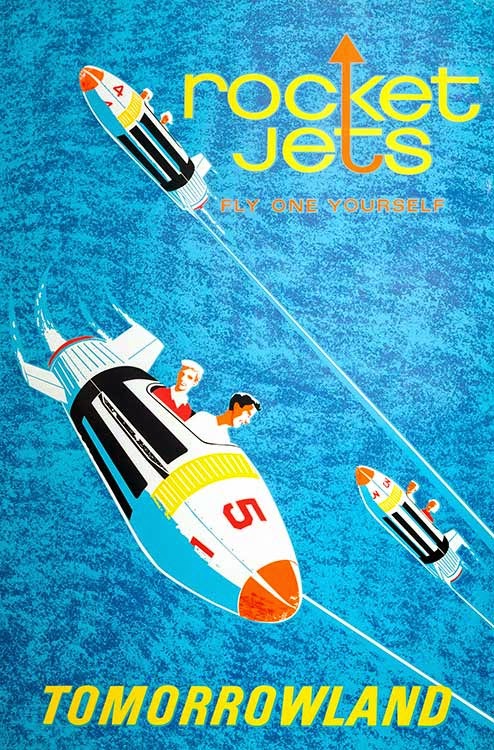 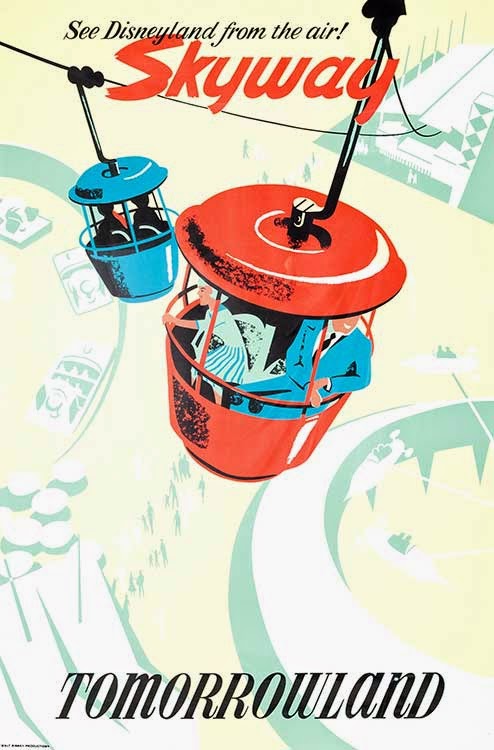 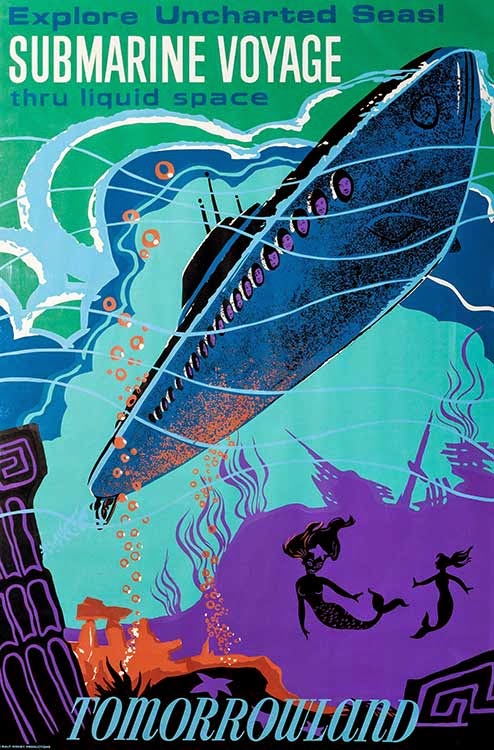 The future was fantastic back then... 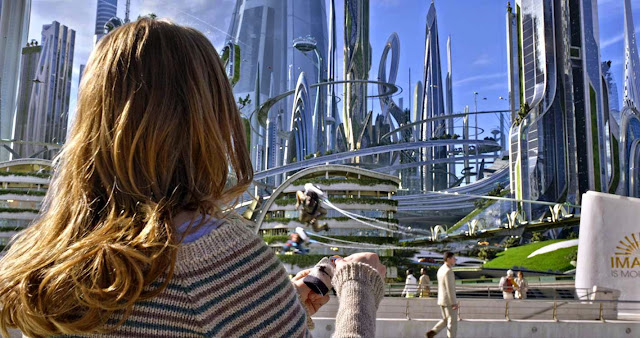 We Have Already Seen.. 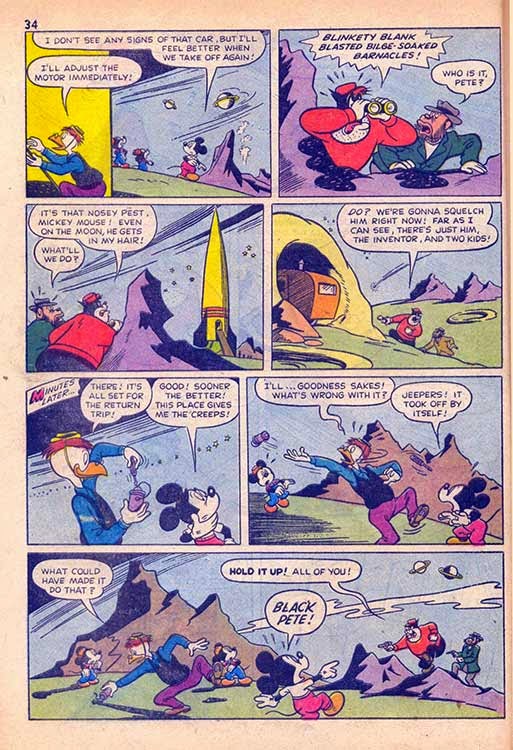 ...the Disney cartoon characters are given total access to Disneyland the day before it officially opens.
Splitting up to visit the various sections, Mickey Mouse and his nephews Morty and Ferdie go to TomorrowLand and meet Gyro Gearloose, who rigs the Rocket to the Moon flight simulator to actually work!
On the Moon, they run into the villainous Black Pete who stole Gearloose's spare space-travel device... 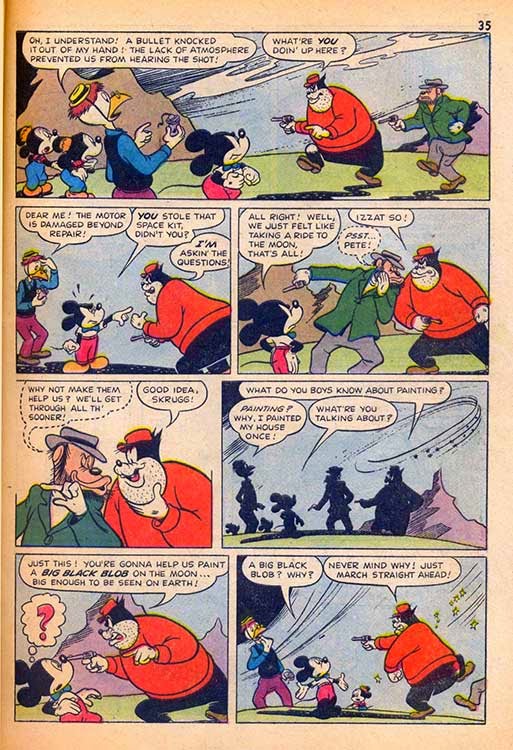 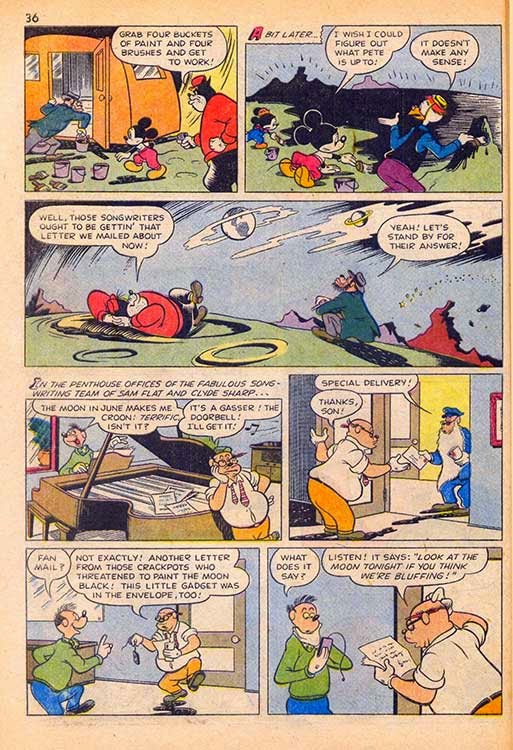 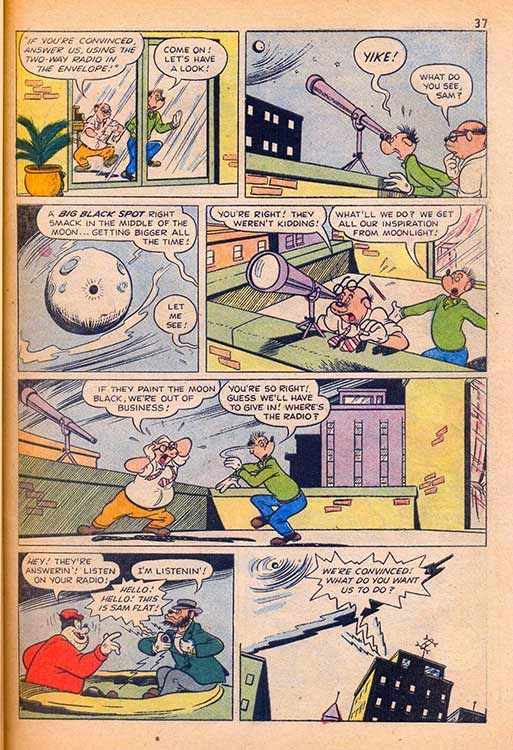 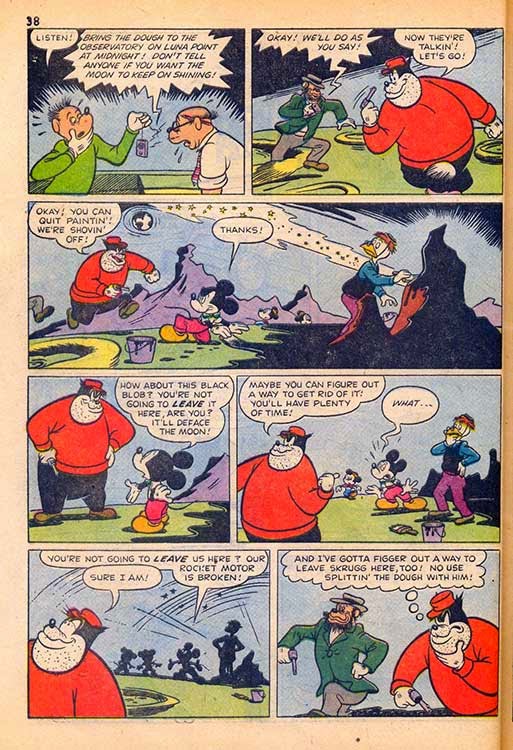 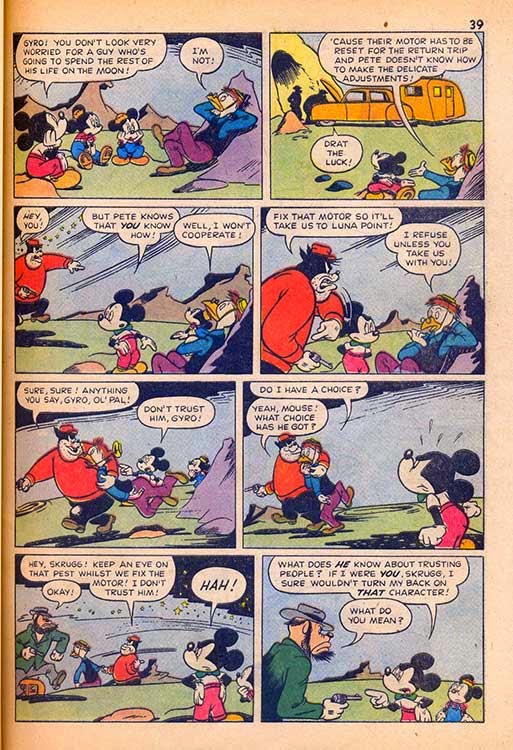 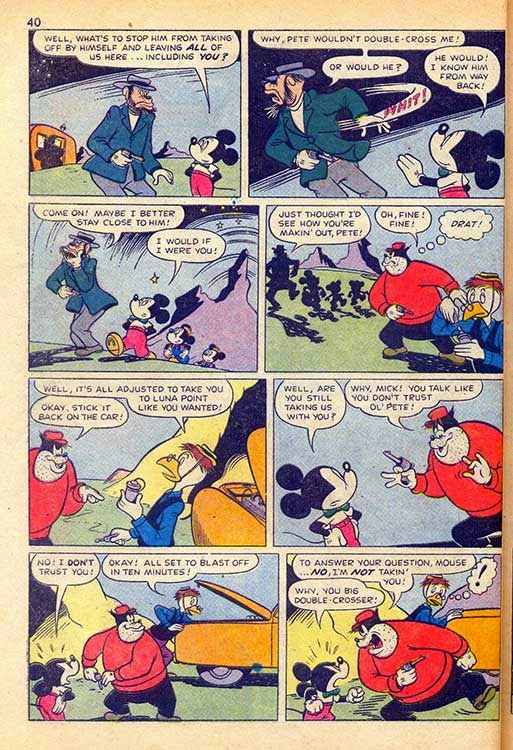 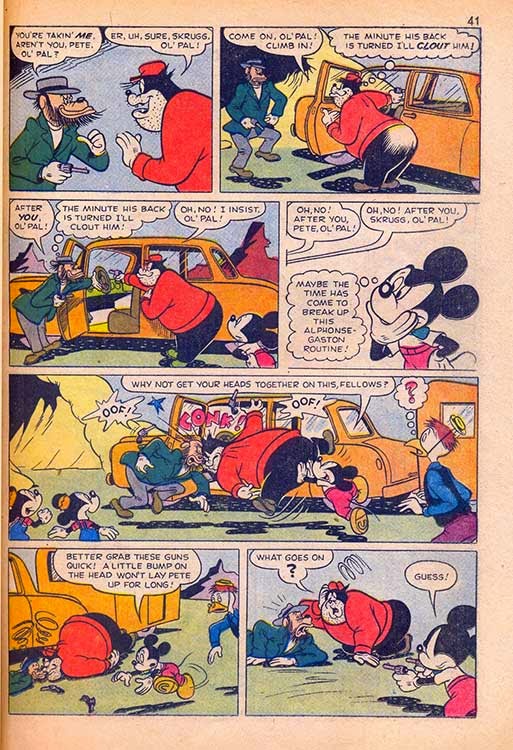 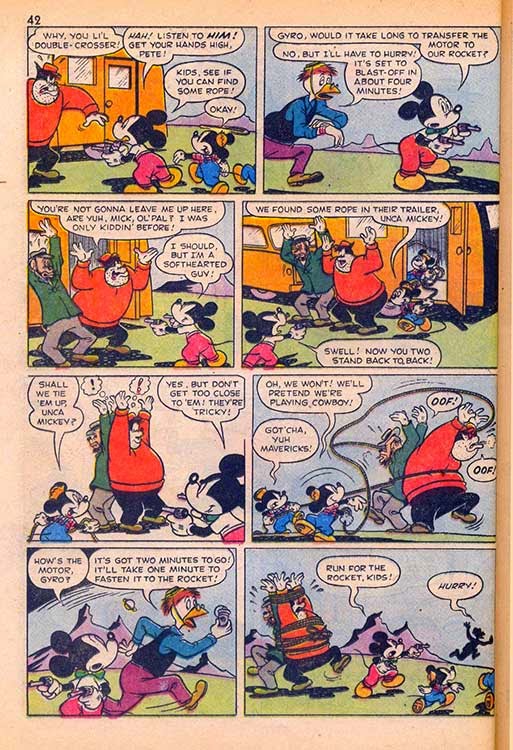 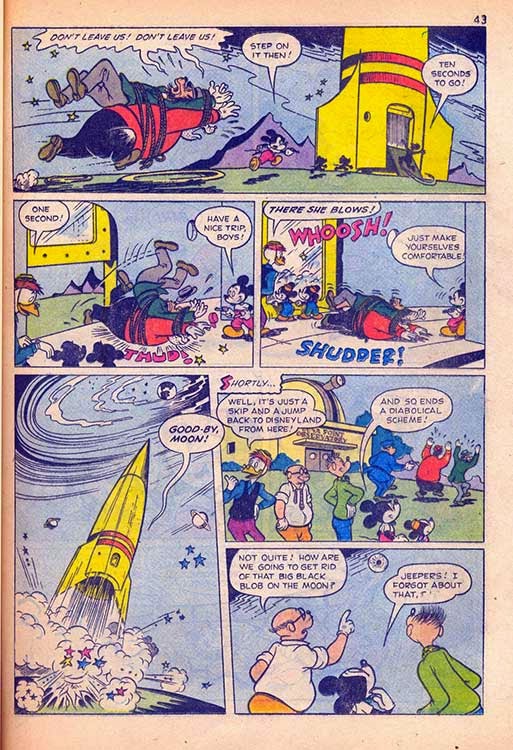 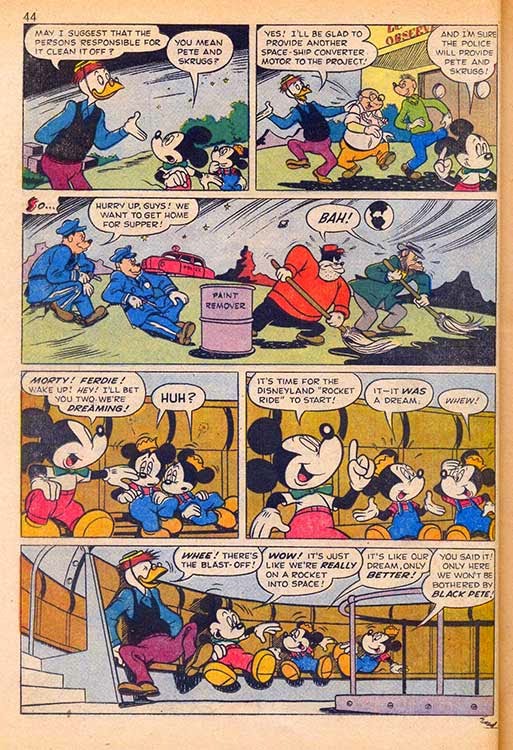 Yes, it's the "It was all a dream!" plotline!
Written by Carl Fallberg, penciled by Tony Strobl, inked by John Liggera (all of whom had extensive experience working on Disney characters), this section of the 100-page 25 cent comic Donald Duck in Disneyland is a classic example of Disney's knack for cross-media marketing for promotional purposes.
In fact, it was so effective that, when DisneyWorld opened in Florida in 1971, most of this issue (including this chapter) was reused in Walt Disney Comics Digest #32 (1971) as promotion for DisneyWorld along with new material about the elements of the theme park that differed from Disneyland!
Note: the various Disney characters did not appear in the actual TomorrowLand theme park.
They're just used here to introduce Disney-oriented kids to the concepts promoted by the exhibits. 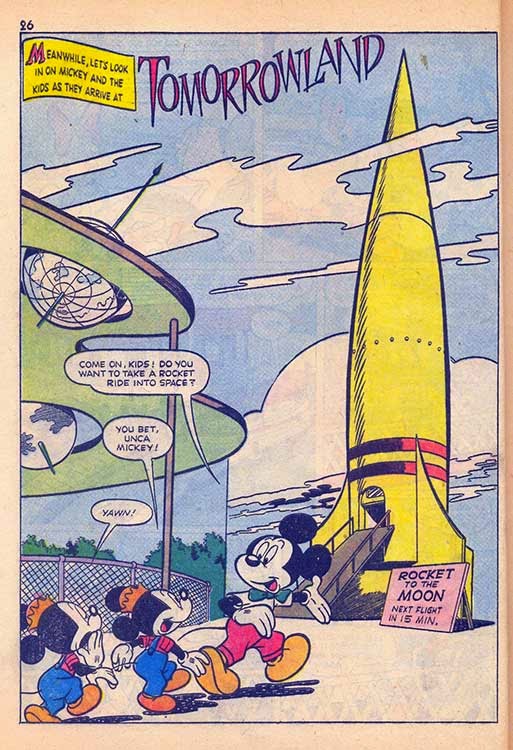 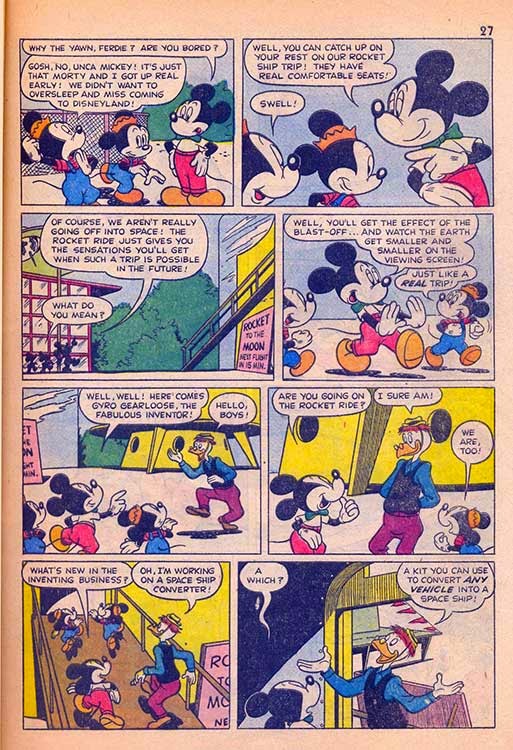 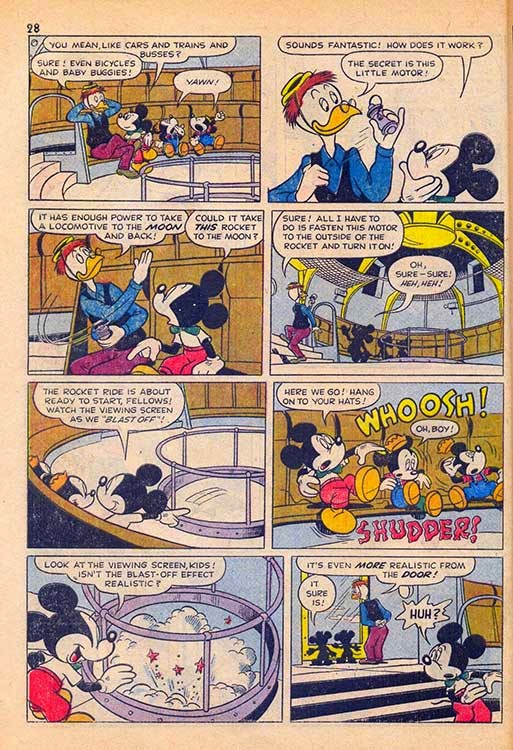 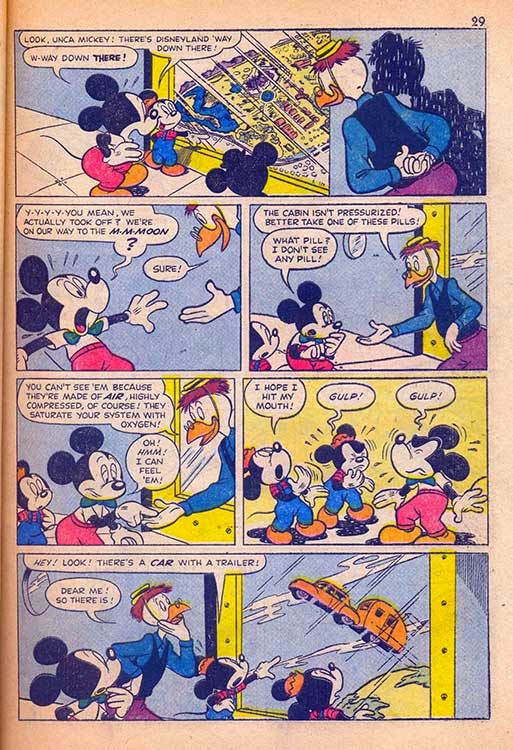 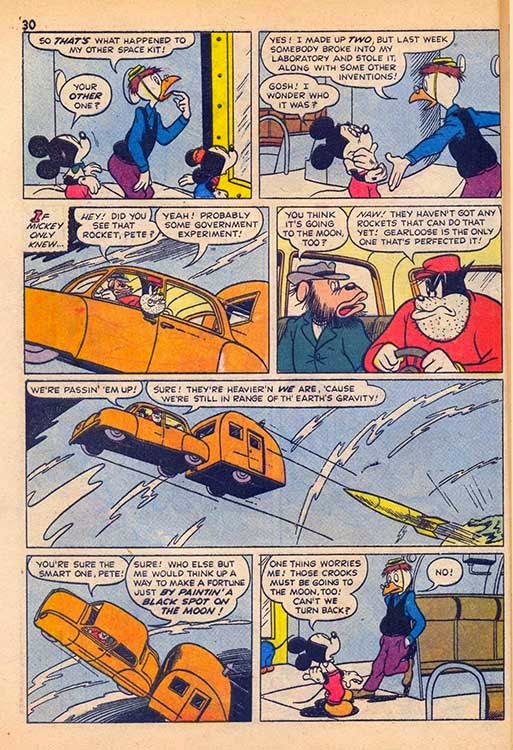 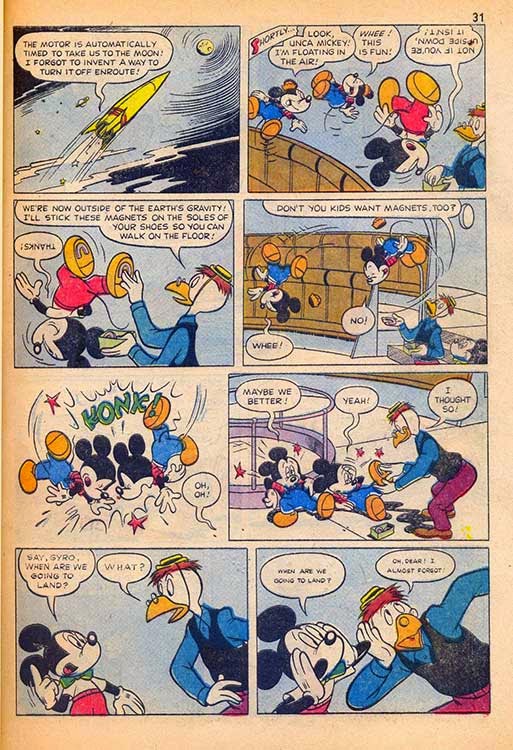 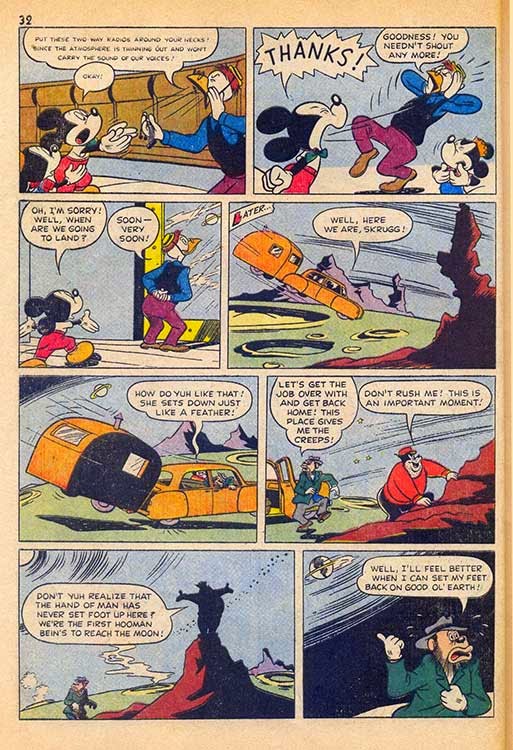 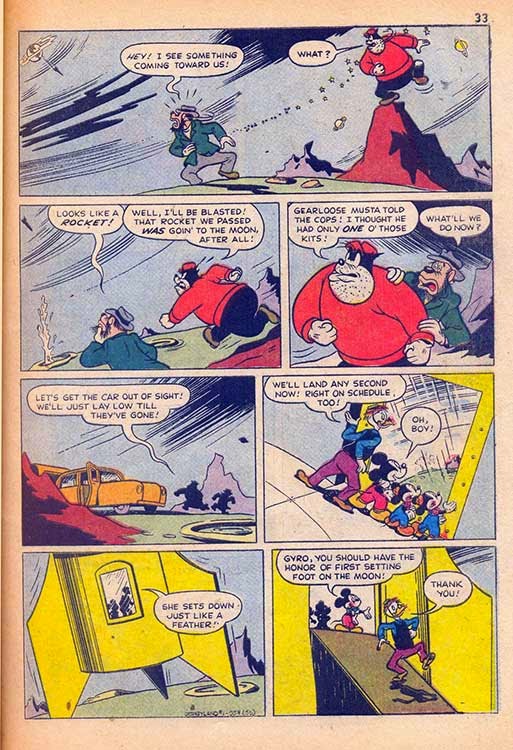 Written by Carl Fallberg, penciled by Tony Strobl, inked by John Liggera (all of whom had extensive experience working on Disney characters), this section of the 100-page 25 cent comic is a classic example of Disney's knack for cross-media marketing for promotional purposes.
Note: the various Disney characters did not appear in the actual TomorrowLand theme park.
They're just used here to introduce Disney-oriented kids to the concepts promoted by the exhibits.
Posted by Britt Reid at 5/19/2015 08:45:00 AM No comments:

With the new movie TomorrowLand opening this week...

...we're going to take a look at a classic comic used when Disneyland opened in 1955 (60 years ago) to promote the theme park attraction that inspired the new flick. 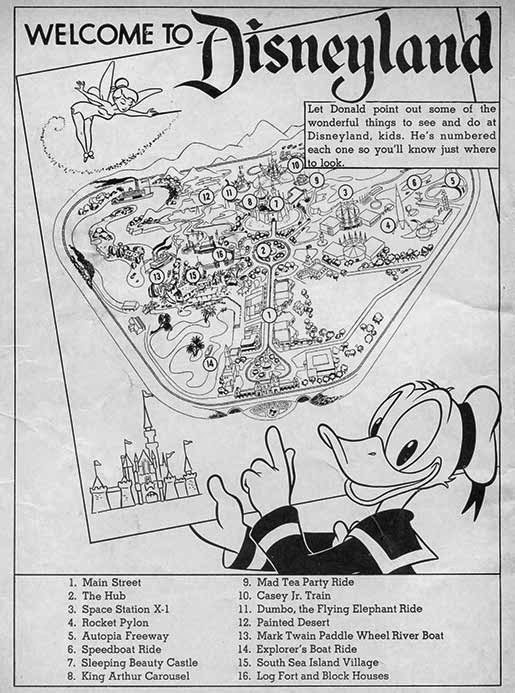 Note that the first things listed after Main Street and The Hub are the primary elements of TomorrowLand; Space Station X-1, Rocket Pylon and Autopia Freeway.
It was the only part of the theme park not based on previous movies, cartoons, or live action tv shows.
(However, the year it opened, the Disney TV series [also named Disneyland] ran several episodes dedicated to science and future technology.)
Tomorrow, join Mickey and his nephews as they are given access to TomorrowLand the day before Disneyland opens!
Posted by Britt Reid at 5/18/2015 07:54:00 AM No comments:

Design of the Week Redux USA IS READY!

Each week, we post a limited-edition design, to be sold for exactly 7 days, then replaced with another...unless it does really well, in which case we retain it for one more week!
This week: As hawks beat the drums of war against everyone from Iran to North Korea, we offer a kool cover from a one-shot comic produced just before we entered World War II...U.S.A. is Ready!
The book itself was re-presented on our "brother" RetroBlog War: Past, Present & Future several years ago.
You can read those posts HERE.
Besides being the basis of the perfect kitschy Memorial Day gift for the veteran in your life, it's a symbol of a time when we were ready to fight because we were the Good Guys and we had to oppose the Bad Guys simply because they were Bad and we were Good.
Unfortunately, since WWII, our military efforts have not always been for the right reasons.
And now, the same conservatives who created the current power vacuum in the Mid-East want us to go back and screw things up further.
But, let's look back on a simpler time when Good and Evil were clearly defined, and we knew that, eventually, we would have to enter a war we had no part in creating.
Posted by Britt Reid at 5/17/2015 01:01:00 AM No comments: