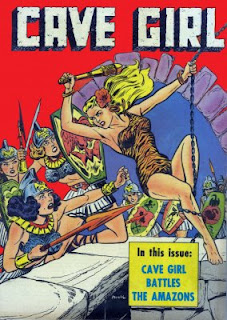 In the 1940s-50s, one of the most popular genres in comics was the "jungle hero", the most famous one of all being Tarzan.
A horde of imitators followed, with some interesting variations, including an entire sub-genre--the "jungle heroine"!
While many had weird names like "Sheena", "Rulah", or "Zoot", one of the best-illustrated was known only as "Cave Girl"!
Rendered by noted "good girl" artist Bob Powell, Cave Girl cut a svelte path thru Africa's villains for four exciting issues!
The Atomic Kommie Comics™ crew has found a home for two of her best covers on shirts, mugs and other stuff in our Heroines™ section.
As a cool retro-styled Christmas gift, she appeals both to guys who enjoy seeing an attractive woman in dynamic action, and gals who like viewing an empowered woman who stands tall and proud in a male-dominated world!
So put Cave Girl under the tree or in someone's stocking this Christmas. But do it quickly, 'cause she won't stay put for long!
Posted by Britt Reid at 11/29/2008 09:45:00 AM No comments: 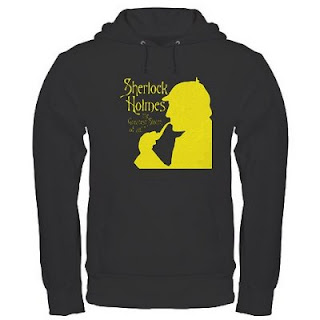 The night before Thanksgiving, Atomic Kommie Comics™ received an e-mail from our supplier, CafePress, that they had just set up to offer black sweatshirts and hoodies.
We immediately went to work, implementing our designs on dark garb where appropriate.
For example, while Santa Claus and SnowMan wouldn't look right on black, Scrooge and Santa Claus Conquers the Martians worked perfectly!
Add Sherlock Holmes (and most of the Crime & Punishment™ line), Horror Comics of the 1950s™, and Seduction of the Innocent™, and you have a cool collection of potential Christmas presents for your pop culture-loving black garb-wearing hipster sweetie!

The People who Saved Thanksgiving--Indians! 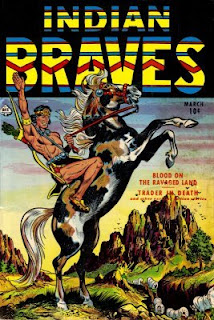 While we of Atomic Kommie Comics™ are digging into our Thanksgiving turkey and other exciting edibles, let's take a moment to thank the guys who made it possible...Indians!
(Admittedly a mis-label, since Native Americans aren't from India, the name has stuck from 1492 to the Present.)
Remember, if it wasn't for the generosity of the local Indians, the Pilgrims wouldn't have survived their first year in the harsh New England environment!

Yet, in most of pop culture (including comics), Indians are "bad guys"!

We've found two of the best, Green Arrowhead (who appeared in Indian Braves) and Red Arrow (who had his own title!) and incorporated them into our Western Comics Adventures™ line with four exciting covers!
Both characters fought for truth and justice against anyone, Indian or White, who threatened peace in the Old West!
So, if you're looking for a Western-themed Christmas gift for that special someone, consider the option of a Native American-oriented graphically-kool collectible!
Now, if you'll excuse us, dinner and football await... ;-)
Posted by Britt Reid at 11/27/2008 11:21:00 AM No comments: Blending the hard-boiled gumshoe, sci-fi and superhero genres, Space Detective burst onto the comics scene in 1951.
Future-era wealthy philanthropist Rod Hathway and his secretary Dot Kenny fight interplanetary evil and helped the innocent as Avenger and Teena using the methods of 1940s gumshoes combined with the technology of the far future! Blasters instead of revolvers! Personal jetpacks instaed of taxis!
Stories, whose titles included "Opium Smugglers of Venus" and "SpaceShip of the Dead", delivered fast-paced action illustrated by comics legends Wally Wood and Joe Orlando, who would go on to greater graphic story glory as mainstays of EC Comics' Weird Fantasy and Weird Science titles.

Weird Trivia:
1) Despite the fact that neither character wore a mask, nobody ever commented "hey, ain't you that famous Hathway guy?" or somesuch.
(Maybe they were too busy looking at Teena's cleavage?)
2) Nobody ever calls Rod "Space Detective"! He's always called "Avenger".
3) The original user of the name "Avenger", a Doc Savage-style pulp/comic character, hadn't been published since 1944. The trademark had lapsed, so it was used on this unrelated character from a different company. (This sort of thing is far more common in comics/pulps than you might think. For example, three different companies have had a "Captain Marvel", none of whom were related to the other companies' versions! Marvel Comics itself has had several Captains Marvel including a father and son!)

Atomic Kommie Comics™ has revived Space Detective in our The Future WAS Fantastic™ retro sci-fi collection.
The four-issue series' slick art style is again in vogue with pop culture aficionados (like us) who are also into video games and graphic novels.
We've digitally-restored and remastered all four covers as well as recreating the series' logo!

So if you're looking for something offbeat as a stocking stuffer or main gift for that certain someone, look at Space Detective...before he comes looking for you!
Posted by Britt Reid at 11/26/2008 10:15:00 AM No comments: 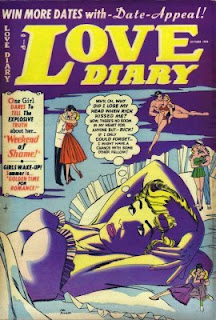 It's great to be in love!
It's even better to be in love at ChristmasTime!
There's something about the scent of evergreen, the twinkling lights, the jollyness of the season that makes romance even better!

If your loved one is both an incurable romantic and a fan of pop culture kitsch, you can't go wrong with one of Atomic Kommie Comics™ funky True Love Comics Tales™ collectibles! Besides the usual t-shirts and tchochkies, we also offer matching intimate tops & bottoms and other cute clothes for the fairer sex!
PLUS: we have a kool 12-month calendar featuring the best of our collected covers! (It's cheaper than flowers or candy and much longer-lasting!)

FUN with Funny Animals at Christmas! 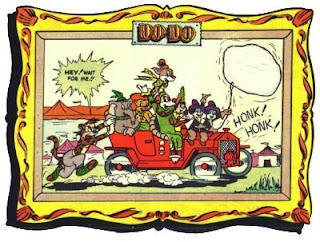 There's something intrinsically adorable about furry critters.
And, millions of children grew up enchanted by animated cartoons.
So, when you have G-rated classic cartoon-style art of furry critters on a variety of collectibles, well, that's a match made in heaven for those who need Christmas presents, whether big ones for under the tree or tiny stocking stuffers for young ones or ones young at heart!
(And aren't you glad we have both types?) ;-)

For those who like pop culture cuteness for their kids, it's ALWAYS Christmas at Atomic Kommie Comics™! (And you won't have to feed or clean up after OUR furry friends!)
Posted by Britt Reid at 11/24/2008 08:44:00 AM No comments:

He Who Personifies Christmas, 2008--Scrooge! 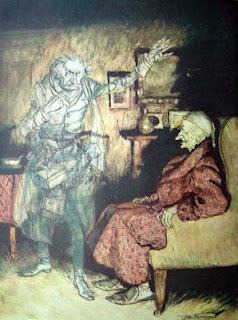 Trash the Tree!
Mangle the Mistletoe!
Exterminate the EggNog!
It's 2008! Economic Armageddon is upon us, and only ONE MAN can show us the True Way to Financial Salvation!
Ebenezer Scrooge!
Only a tight-fisted miser can save us from the Depression that is to come!
Charles Dickens' immortal Hero is back to lead us thru these dark times!
And only Atomic Kommie Comics™ could offer you so many different bargain-priced ways to show how you appreciate Him!
We offer almost two dozen designs including...
Several from the 1st Edition A Christmas Carol!
Several from the A Christmas Carol illustrated by legendary fantasy artist Arthur Rackham!
A trio from A Christmas Carol the Movie with Alistair Sim as the definitive screen Scrooge!
PLUS: several other Scrooge and Christmas Carol designs including a "Bah, Humbug!" in classic Victorian-era lettering!
What better way to show what Christmas 2008 means to us all?
Choose from our reasonably-priced Clothing or Collectibles (including 10 or 20 packs of greeting cards / Christmas cards with FREE personalization!) to proclaim to the world your loyalty to Him!
Give the gift that keeps on giving, even if you, personally, don't!
And "Bah, Humbug!" to all this Holiday Season!

BE A MISER--FREE SHIPPING on Apparel//Clothing orders of $50 or more Friday, Nov. 21 thru Sunday Nov. 23! (NOTE: Includes Messenger & Tote Bags!) Use Code FEMHOL8 at CheckOut!
Includes t-shirts, sweatshirts, hoodies, jerseys, jackets, polos, denim shirts, tank tops, camisoles, undergarments, bags, headwear, aprons, bibs, and infant bodysuits. Delivery address must be within the United States and cannot be a PO Box. All orders will be Economy shipping unless the order is not eligible for Economy shipping (e.g., order exceeds Economy weight restrictions). Coupon code must be entered at CafePress.com check out. Promotion starts on November 21, 2008, at 12:00 a.m. (PST) and ends on November 23, 2008 at 11:59 p.m. (PST). Cannot be combined with any other CafePress.com offers, discounts or coupons and this offer may change, be modified or cancelled at anytime without notice.
Posted by Britt Reid at 11/23/2008 01:09:00 AM No comments: