With a "rebooted" Man of Steel currently in release...

...I thought we'd take a look at the previous live-action movie versions!


Then George Reeves' Superman, who first appeared in the movies...

...and, though he popped up almost continuously on the small screen, the Last Son of Krypton didn't reappear on the big screen until 1978...

..restored scene from Superman II explaining how he got his powers back!


...after two awful sequels, Superman didn't come back to movies until 2006 in a sincere, but flawed, attempt to continue the story from the end of Superman II...
And now, a total reboot!
Check out

Before MAN OF STEEL was SUPERMAN!

Man of Steel, opening today, is only the latest version of Superman to hit movie screens
The first one was an Academy Award-nominated flick...

In 1941, Max and Dave Fleischer, the animators who had previously brought Popeye and Betty Boop to the silver screen, presented Superman's first movie appearance in full-color cartoon shorts.
Meticulously-following co-creator Joe Shuster's character designs, the cartoons also contributed several elements to the Superman mythos including; changing clothes in a phone booth, Superman actually flying (Up to this point, he had leaped from point to point) and the catch phrase "Faster than a speeding bullet! More powerful than a locomotive! Able to leap tall buildings in a single bound!"
Voices were provided by the dramatic radio Superman / Clark Kent (Bud Collier) and Lois Lane (Joan Alexander) who would also reprise the roles in the first tv Superman cartoons in 1966!
Trivia: Though nominated for several Oscars, the Superman shorts lost each time! 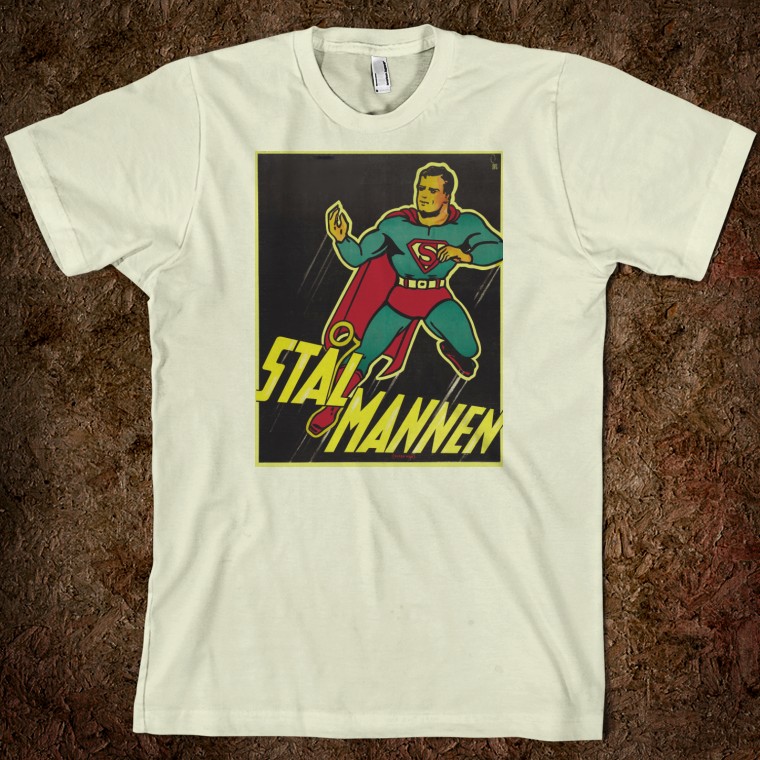 We're proud to present one of the koolest of the original 1940s advertising posters for the cartoon series, digitally-restored and remastered, both as a limited-edition print and as a collectible t-shirt!
The bold graphic, though deceptively-simple, leaps off the page at you with it's power!
It's also the only Fleischer Superman poster we've seen that commissioned new art, rather than use existing comic book or animation art!
And best of all, it's in Swedish!
Perfect as a gift for an animation aficionado or Superman fan (or someone who's both)!
Posted by Britt Reid at 6/13/2013 01:01:00 AM No comments:

...by attempting to defy the Federal Government's order to de-segregate Alabama schools.
(He backed down when he realized that the Feds meant business.)
Wallace was so proud of his segregationist attitudes that he had them included in a comic book produced in 1960 during his election campaign! 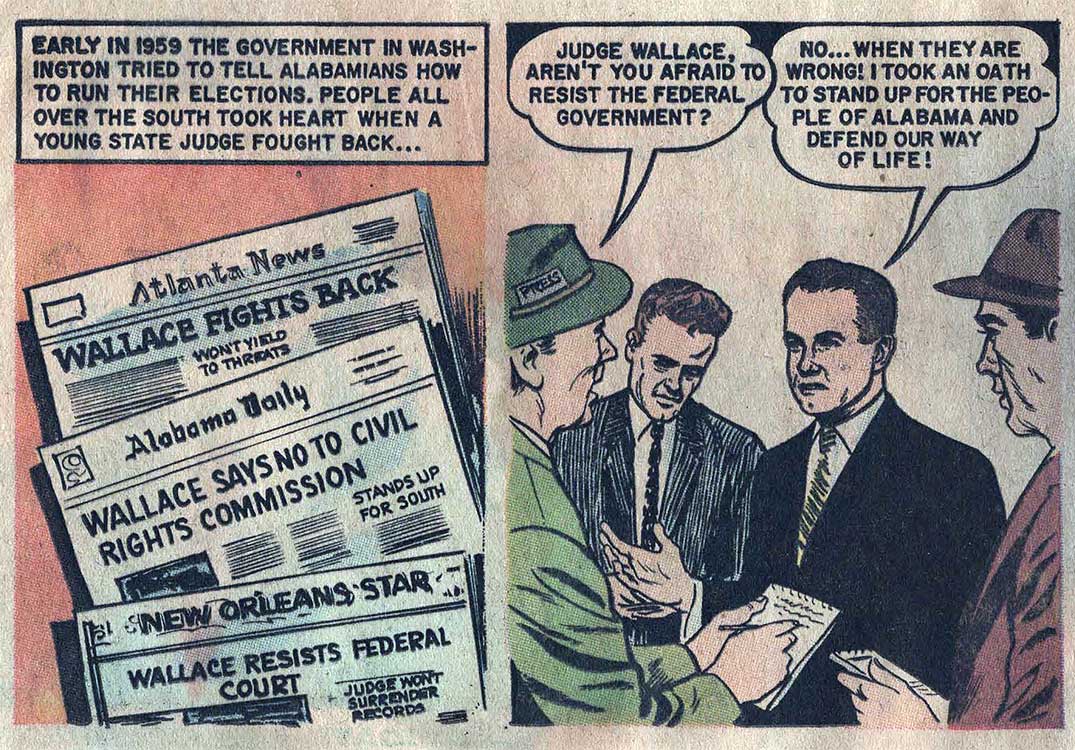 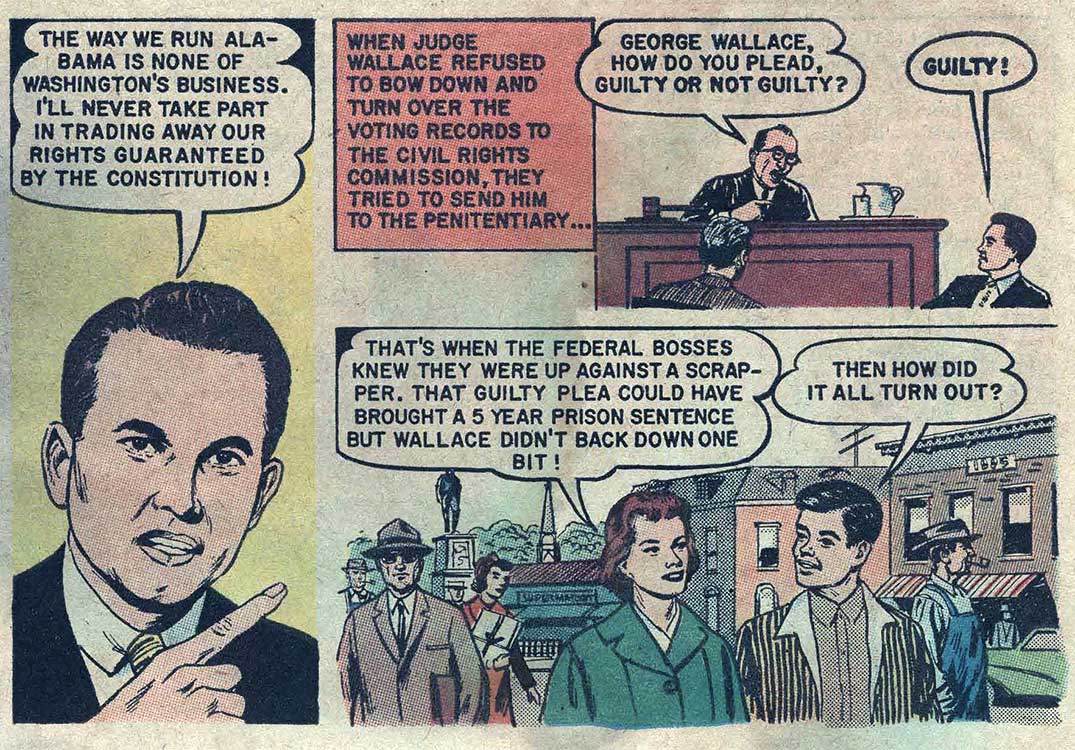 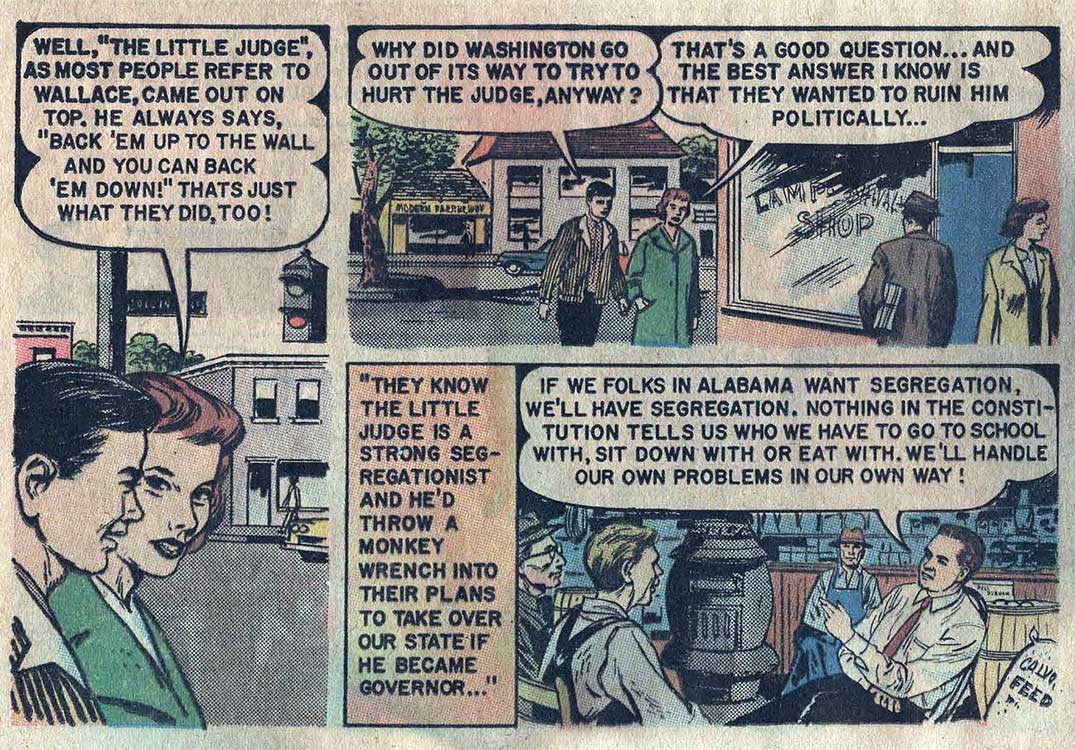 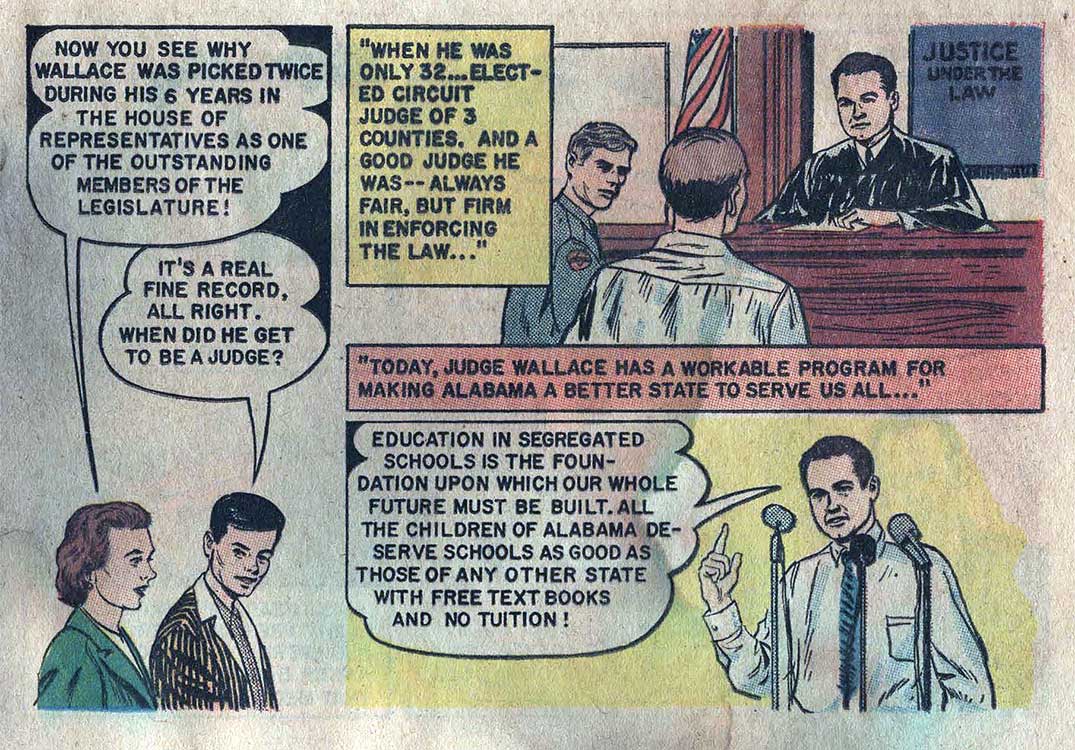 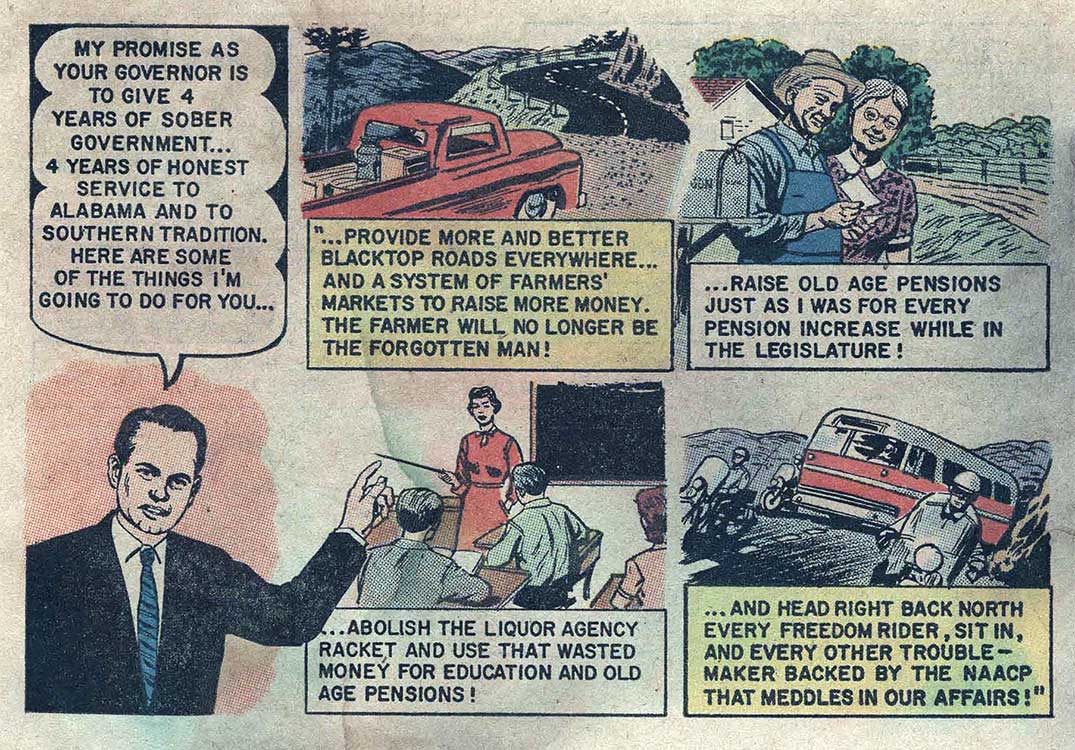 These pages are excerpts of the 16-page comic considered instrumental in Wallace's victory in 1960.
You can see the complete comic HERE.
You'll note an emphasis on "states' rights" of the sort Tea Partiers advocate as well as the paranoid fear that the Feds wanted to "take over" Alabama.
BTW, In his inaugural speech after winning the race, Wallace promised "segregation now, segregation tomorrow, segregation forever."
Note: Ironically, Wallace was a Democrat.
However, Federally-forced desegregation as well as the passage of the Civil Rights Act of 1964 caused many racist Democrats to switch to the Republican Party (which began catering to the right-wing audience with the "Southern Strategy") or, as in the case of Wallace, joining the newly-created American Independent Party.
In the late 1970s, Wallace became a born-again Christian and recanted his racist attitudes.
Posted by Britt Reid at 6/12/2013 02:56:00 PM No comments:

Murder on a cruise ship is an old mystery story trope... 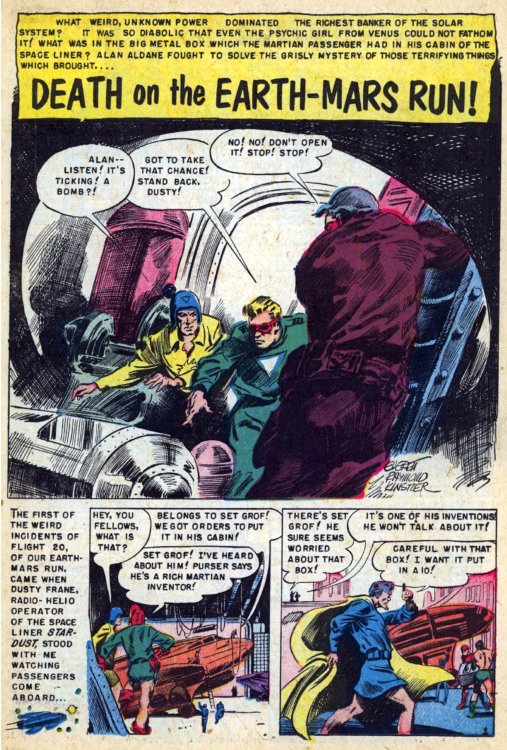 ...but transposing the plot from an ocean liner to a space liner emphasized the "trapped with a killer" aspect! 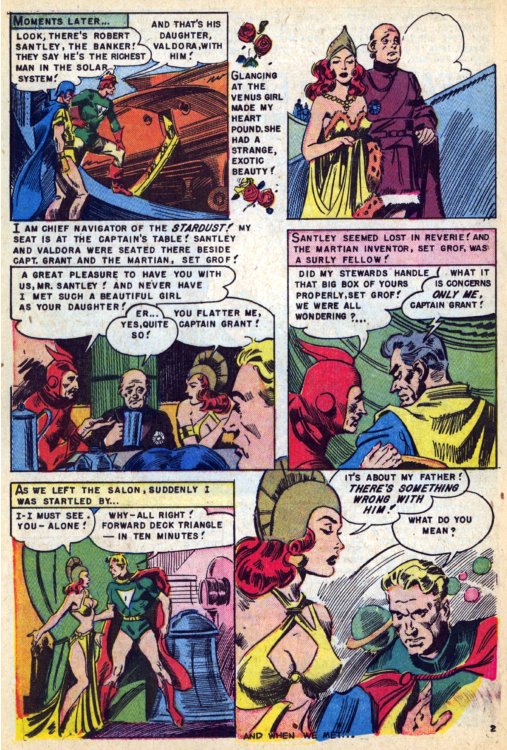 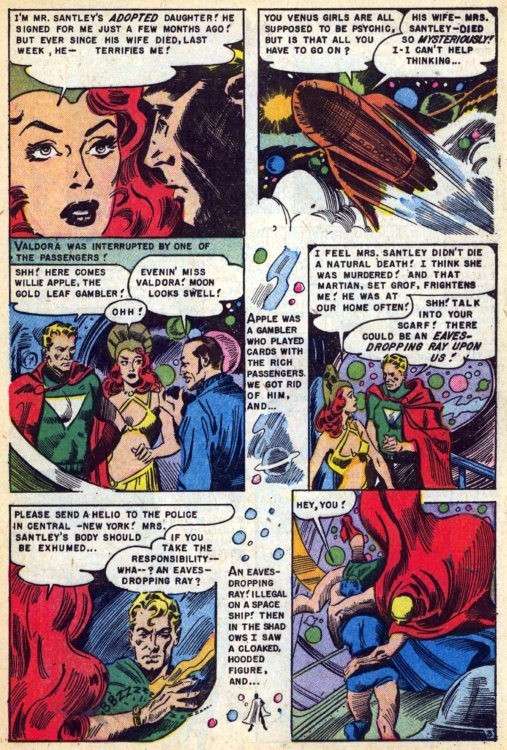 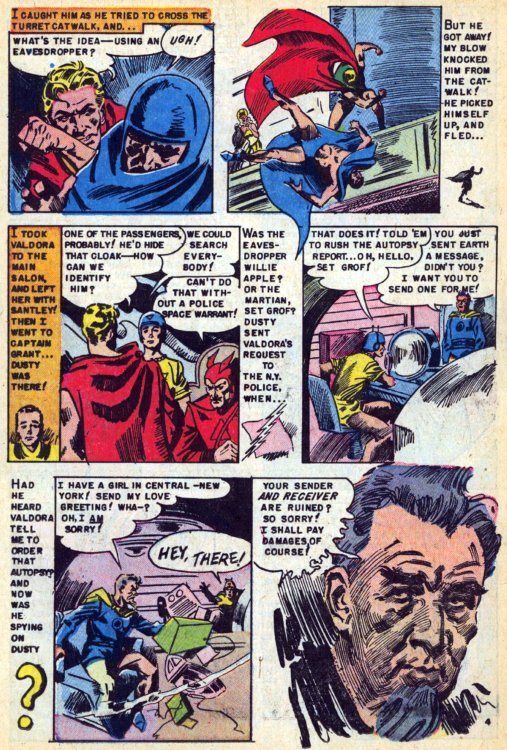 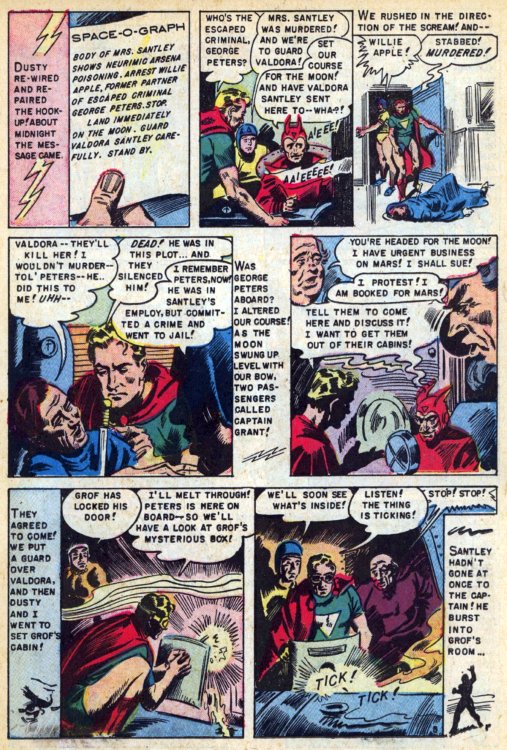 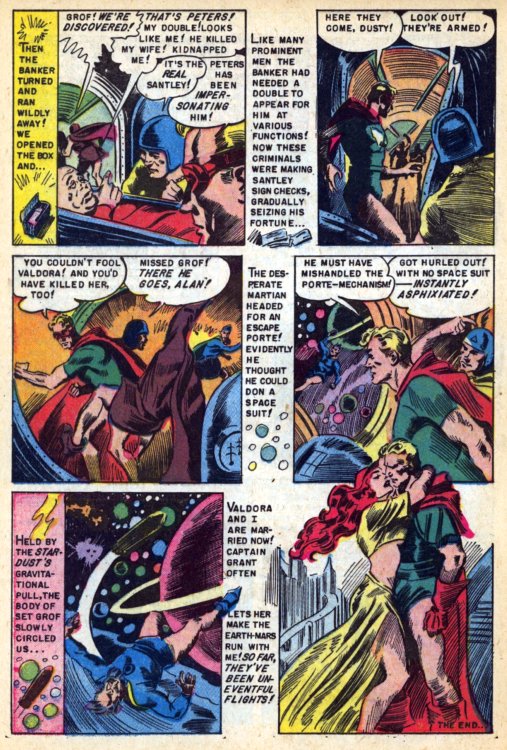 This tale of murder and mayhem on the high seas in deep space appeared in Avon's Strange Worlds #8 (1952) and was rendered by Everett Raymond Kinstler, who eventually left pulps and comics for fine art (including several official portraits of US Presidents).
Unlike most pulp/comic artists who moved into fine art, Kinstler is happy to discuss and display his early work.
You'll note a lot of swipes of Flash Gordon art by Alex Raymond.
This wasn't unusual, since Raymond (along with Milton Caniff, Hal Foster, and Noel Sickles) were seminal inspirations for the first generation of comic book artists.
BTW, the writer of the tale is unknown.
When the story was reprinted in the back of Skywald's The Heap #1 (1971), the Comics Code forced a couple of odd changes...

Making Santley's adopted daughter his stepdaughter and eliminating the "he signed for me" quote!
Adding a "Space Police" sig to the note, emphasizing the "official" aspect of the order.
Visit 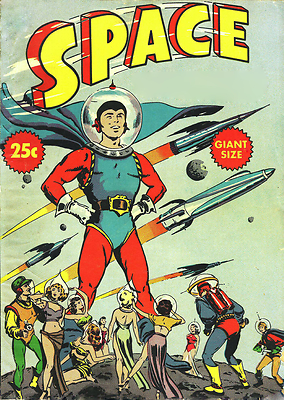 Look at what's going to happen next year... 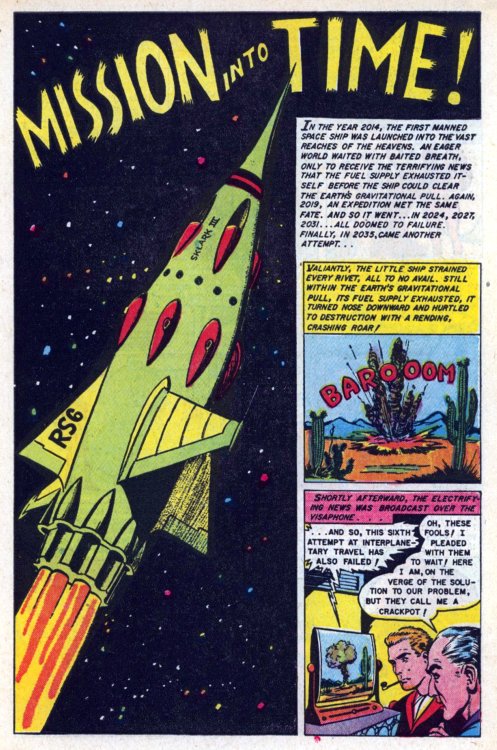 ...as predicted in this tale published in the third and final issue of Ace's sci-fi anthology, Space Action (1952)! 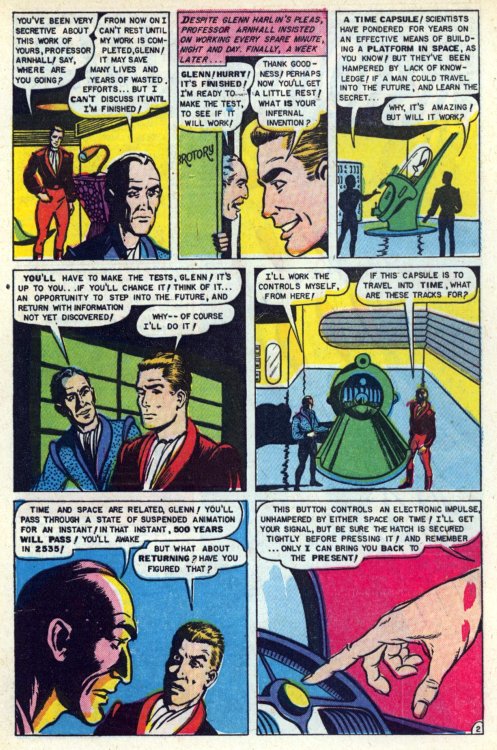 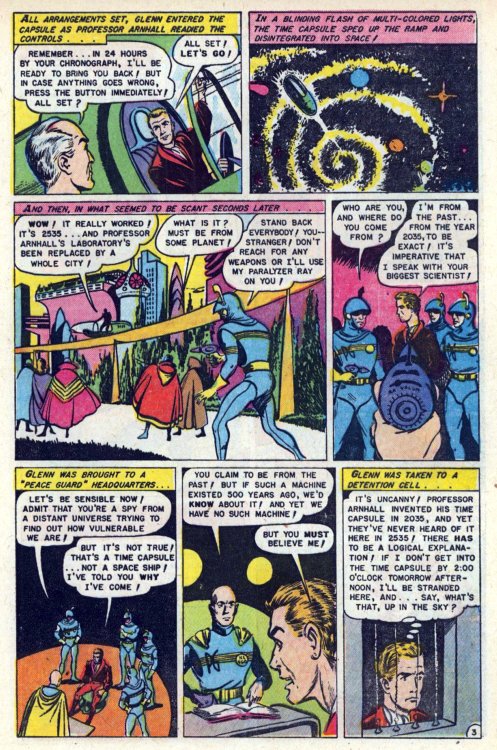 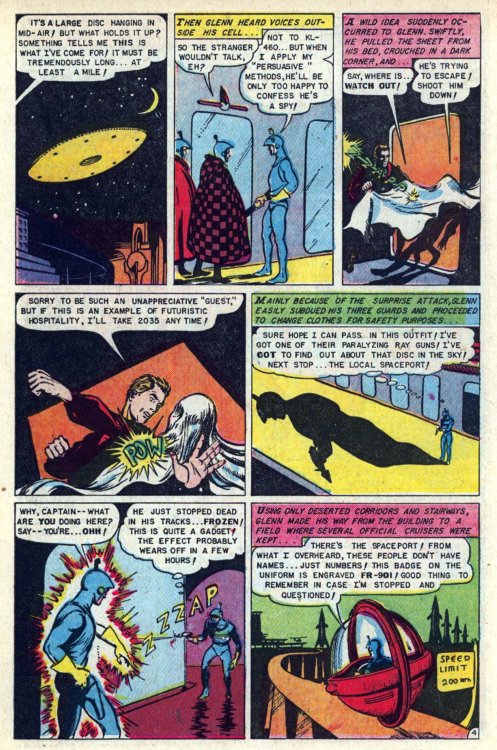 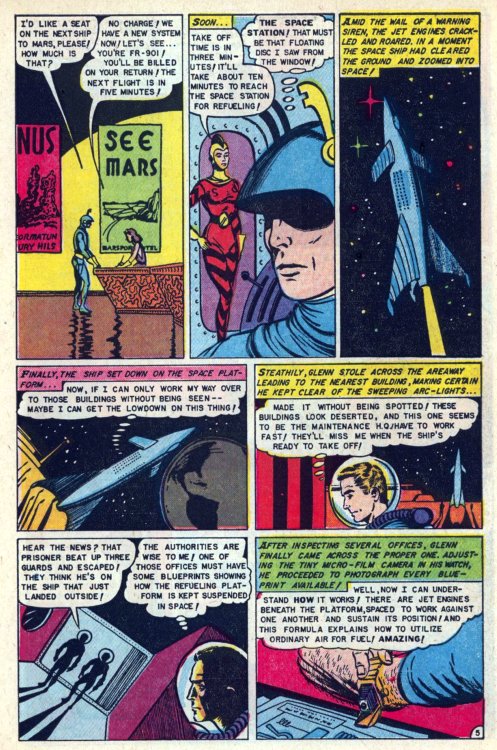 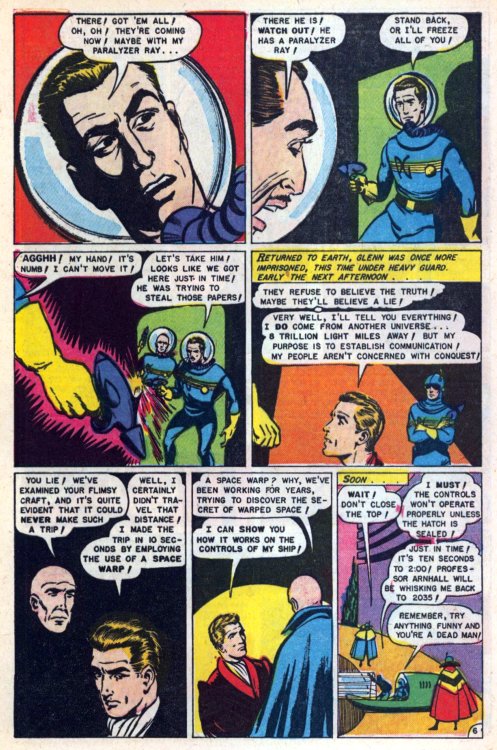 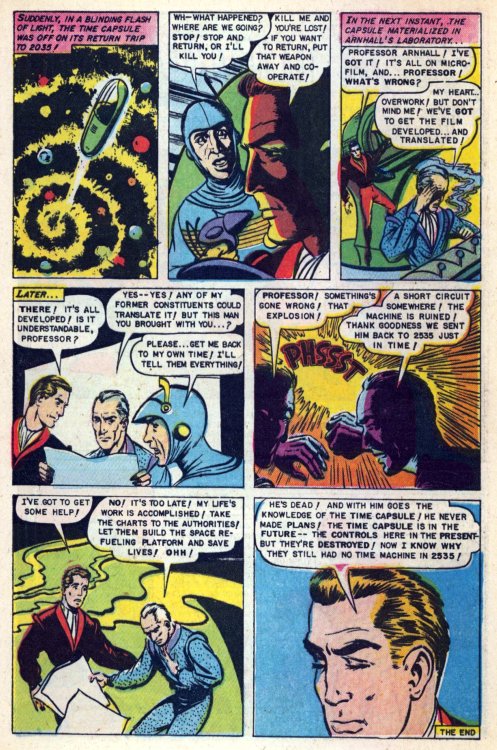 At least this tale, illustrated by Lou Cameron, offers an explanation as to why time travelers haven't come back to the past.
But, I find it difficult to believe the people of the future couldn't retrofit a vehicle with still-functioning (though centuries-old) technology with a control device.

BTW, the writer is unknown.
Visit
The Future WAS Fantastic! 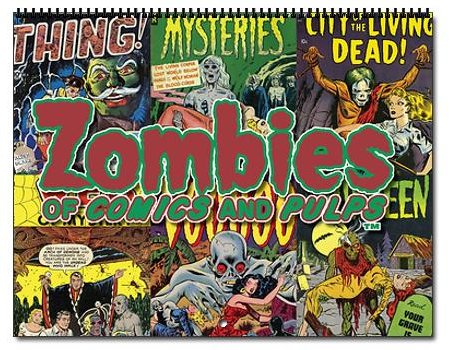