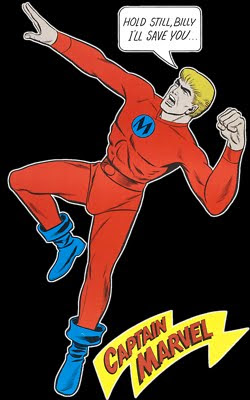 Each week, we post a limited-edition design, to be sold for exactly 7 days, then replaced with another!
This week,a Lichtenstein-style pop-art rendering of the 1960s version of Captain Marvel!
No, not the Golden Age hero

who said "SHAZAM!" or the several Marvel comics characters

who've used the name, but an alien android who yelled "SPLIT!" and then broke into several pieces which flew around operating independently! (I'm not kidding!)
The vintage art also features the Ben-Day dot pattern for the skin tone that Roy Lichtenstein popularized in his "pop art" paintings of the period.
It's retro-style fun on a host of kool kollectibles, but only for a week, so grab them while you can!
Next Friday, it'll be history, just like the 1960s!
Posted by Britt Reid at 5/07/2010 01:01:00 AM