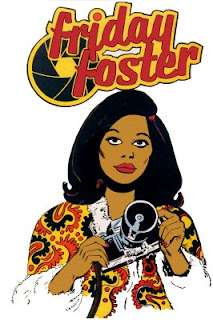 Beginning on January 18, 1970, Friday Foster was the FIRST mainstream syndicated comic strip to star a Black woman. (Jackie Ormes' legendary Torchy Brown was, unfortunately, limited to black-owned newspapers which had relatively-limited circulation.)
It was also the FIRST mainstream syndicated comic strip to star a Black title character! (Quincy by Ted Shearer debuted later in 1970.)
Writer Jim Lawrence was no stranger to adventure strips, having previously written Captain Easy and Joe Palooka, and, after his stint on Friday, Buck Rogers! (He also penned the '70s paperback series Dark Angel about a Black woman private eye.)
European artist Jorge Longaron had done a number of strip projects unseen in the US. Friday was his American strip debut.
The series was a combination of adventure and soap-opera, about former fashion model-turned-photographer's assistant (and later professional photographer) Friday Foster.
Supporting characters included photographer Shawn North (her boss and later business partner) and millionare playboy/romantic interest Blake Tarr.
The series lasted until '74, with some of the final strips illustrated by Dick Giordano and Howard Chaykin!
Besides the strip, there was a one-shot comic book in 1972, and a feature film in 1975 (a year after the strip was canceled) starring action-movie goddess Pam Grier as Friday, Thalmus Rasulala as Blake Tarr, Yaphet Kotto as Detective Colt Hawkins, plus Eartha Kitt, Jim Backus, Godfrey Cambridge, and in one of his earliest roles, Carl Weathers, as an assassin! While there was a soundtrack album, curiously, I've never seen a novelization (and they did novelizations of movies that weren't even released in the US)!
We at Atomic Kommie Comics™ proudly present her a part of our Heroines™ line which also includes Jane Arden: Crime Reporter, Cave Girl, Jet Dream & Her Stunt-Girl CounterSpies, Miss Fury, Miss Cairo Jones, Miss Masque / Masquerade, Molly O'Day: Super Sleuth, Annie Oakley, Phantom Lady, Tiger Girl, and UnderCover Girl!
If you're looking for a cool Christmas gift for the Black History aficionado or grrrl hero fan in your life, you can't go wrong with a Friday Foster mug, bag, shirt or other goodie!
Posted by Britt Reid at 11/10/2008 08:59:00 AM