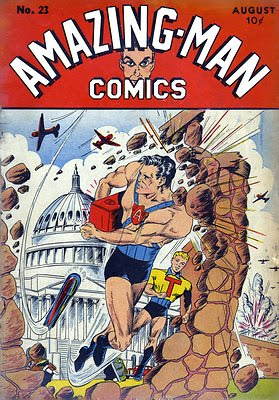 He first appeared in the premiere issue of his own title, Amazing-Man Comics #5*.
John Aman was an orphan baby taken to a hidden monastery in Tibet by a secret society of monks.
There, the Council of Seven raised and trained him to be "the Ultimate Human", a perfect combination of physical development and mental ability.
They also gave him the chemically-induced ability to teleport thru a cloud of green mist.
This proved to be handy when a Council member, The Great Question, went renegade and set up his own cult and began plotting world domination.
The Council sent Aman into the outside world to prevent The Great Question from wreaking havoc.
Of course, when he appeared in public in his rather-skimpy outfit with an "A" on it, the tabloid press dubbed him "Amazing-Man".
During his short (less than three-year) run, he also helped against spies and saboteurs before Centaur Publications went out of business due to wartime paper shortages in late 1942.

Trivia note: Amazing-Man was one of the first creations of writer/artist Bill Everett.
Everett also created Prince Namor, the Sub-Mariner, Hydro-Man, and The Fin. (He had a penchant for aquatic characters)

Amazing-Man has returned in several incarnations since then...
Malibu Comics incorporated him (along with most of the other Centaur Publications heroes) into The Protectors series, which ran for a couple of years in the 1990s.
DC Comics introduced a similarly-named, though otherwise unrelated hero into The Justice Society of America's 1940s stories in All-Star Squadron and Young All-Stars (His secret identity is "Will Everett", named after Bill Everett.)
Dynamite Entertainment revived him in Alex Ross' Project SuperPowers, where he's been a background character up to this point. But since his nemesis, The Great Question, has been shown to be one of the conspiracy of The Supremacy, it's only a matter of time before John Aman takes a hand in matters!
And, Marvel Comics has put John Aman himself into a series inspired by his 1940s series, The Immortal Iron Fist!

Of course, we at Atomic Kommie Comics™ have revived Amazing-Man as part of our Lost Heroes of the Golden Age of Comics™ line, including his FIRST cover appearances and two of his best covers on t-shirts, messenger bags, mugs and other kool kollectibles!
But that's not all!
His unique cover logo is included in our Comic Cover LogoWear line, where the best of Golden Age cover lettering ends up on your chest or bookbag!
Plus, he'll soon be part of our Icons of the Golden Age of Comics series!
Pretty good for a guy who was cancelled in the mid-1940s, eh?

*No, that's not a mistake. Issues 1-4 of the comic had been titled Motion Picture Funnies Weekly.
When it didn't sell well, the publisher simply introduced a new character and retitled the comic, but kept the numbering.
Otherwise, he'd have to pay for a new 2nd class mailing permit for a new publication.
1940s publishers were nothing if not thrifty!
Posted by Britt Reid at 7/15/2009 11:04:00 AM