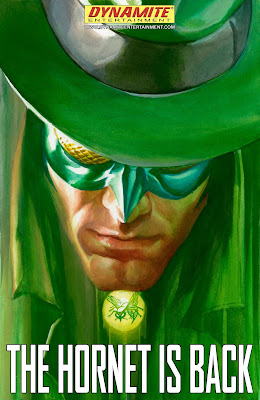 As all us fanboys (and fangirls) know, before Seth Rogan's version of The Green Hornet was "green-lighted" (ahem), fan-turned-pro Kevin Smith was scheduled to write and direct a new film adaptation of the multi-media character.
Now, Dynamite Entertainment, who successfully revived classic characters Zorro, The Lone Ranger, Buck Rogers, and the 1940s heroes we at Atomic Kommie Comics™ classify as the Lost Heroes of the Golden Age of Comics™ in Alex Ross' Project SuperPowers, are also doing The Green Hornet, with one of the projects being a comic book mini-series of the un-produced script for the Kevin Smith film project! 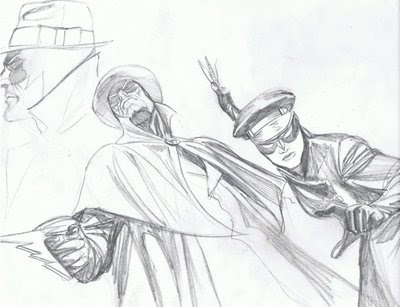 Interestingly, he seems to have adapted several elements from the tv series including the domino mask (rather than the lower-face mask of the comics and radio show ad art or the full-face mask of the serials) and use of a "stinger" weapon, as well as the NOW Comics' female Kato! (and of course, having Alex Ross do the costume designs and cover art doesn't hurt!)

One request to the powers-that-be at Dynamite...
Kevin Smith has become notorious for his problems meeting deadlines on his comic book projects.
Hopefully, the fact that he's already worked out the plot and probably most of the script of the movie will enable him to produce the mini-series in a far more timely manner than his other oft-delayed work.
At any rate, please don't schedule publishing the mini until at least 3/4 of the script is in-house!