The Target; the hero who WANTS you to shoot at him! 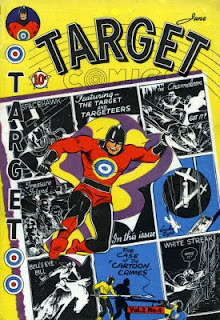 Created by Dick Briefer (who also created the Monster of Frankenstein series from Prize Comics) The Target was a scientist who created a suit of flexible bulletproof metal and used it to fight evil. His sidekicks, the Targeteers were his alter-ego's business partners, as well. They wore costumes of the same design, but in different primary (red, yellow, blue) colors. All three each had a giant bulls-eye design on their chests, which tended to draw enemy gunfire in amazing amounts. (It's never explained how the metal also absorbed the kinetic energy of the bullets that hit the trio. An isotope of Vibranium, perhaps?)
Interestingly, he didn't make his debut until issue #10 of Target Comics. (The previous issues featured a hero called The White Streak, who faded shortly after The Target made the scene.)
Atomic Kommie Comics™ now offers four classic covers as part of our Lost Heroes of the Golden Age of Comics™ line of collectibles, including the 1st appearance & final appearance covers!
Note: As part of Alex Ross' new Project SuperPowers series, the Target & Targeteers will be cover-featured on #5 along with The Arrow.
Don't forget to buy it, and EVERY issue of Project SuperPowers! It's one of the best series on the market today!
Posted by Britt Reid at 4/18/2008 01:30:00 PM