In 1964, Treasure Chest, an educational comic distributed only to Catholic schools... 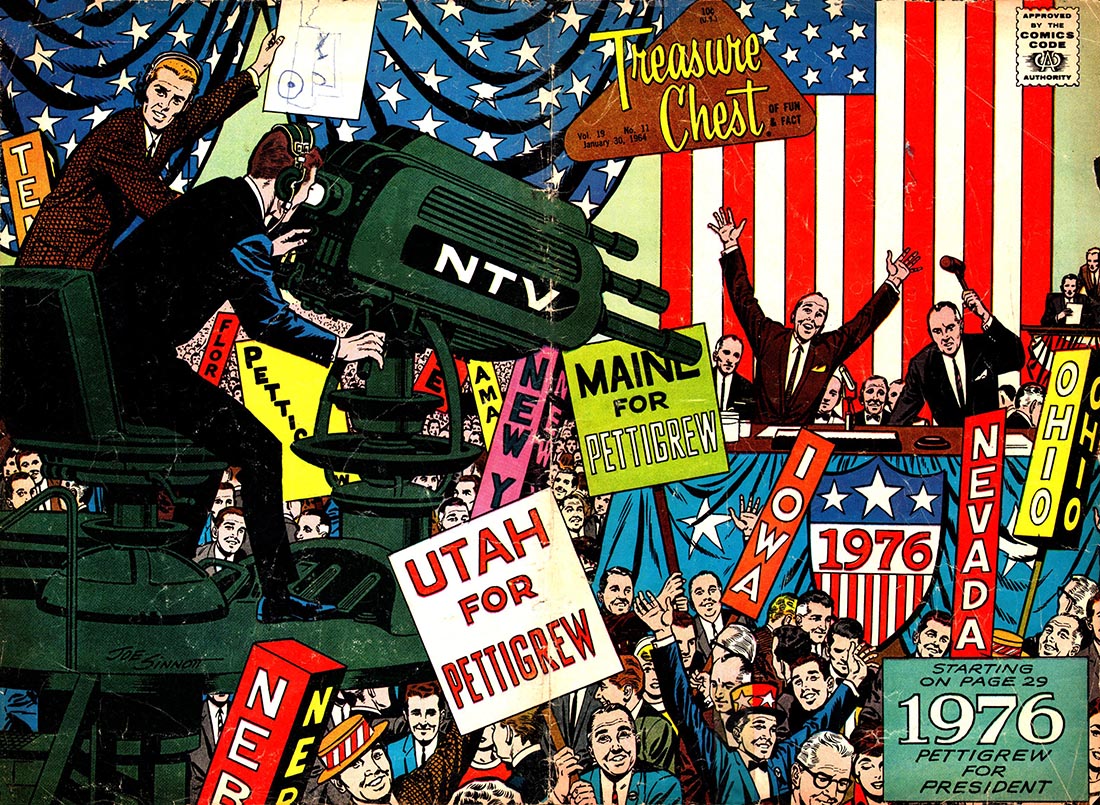 ...published a multi-part serial about how Presidential elections occurred, using the then-future Bicentennial year's elections as the example! 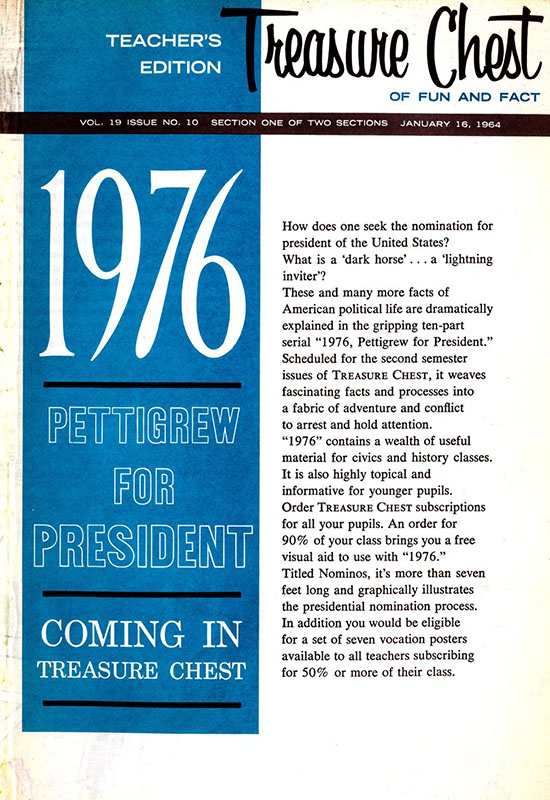 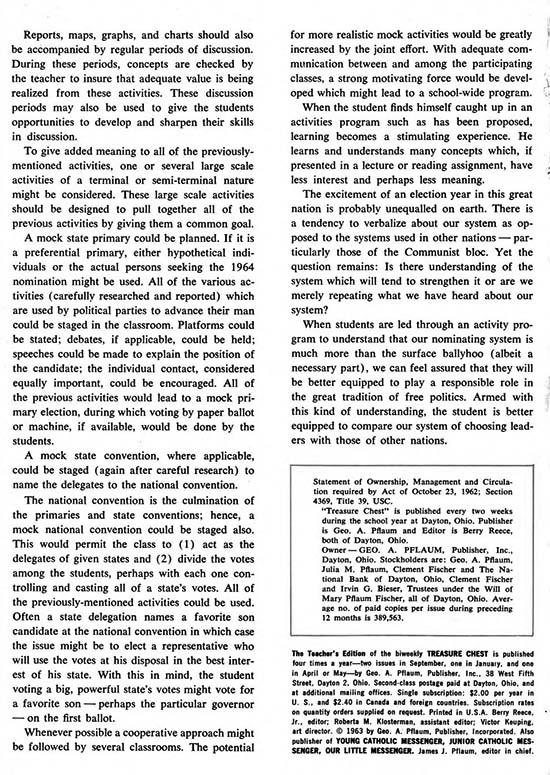 ...while leaving out specific plot points! 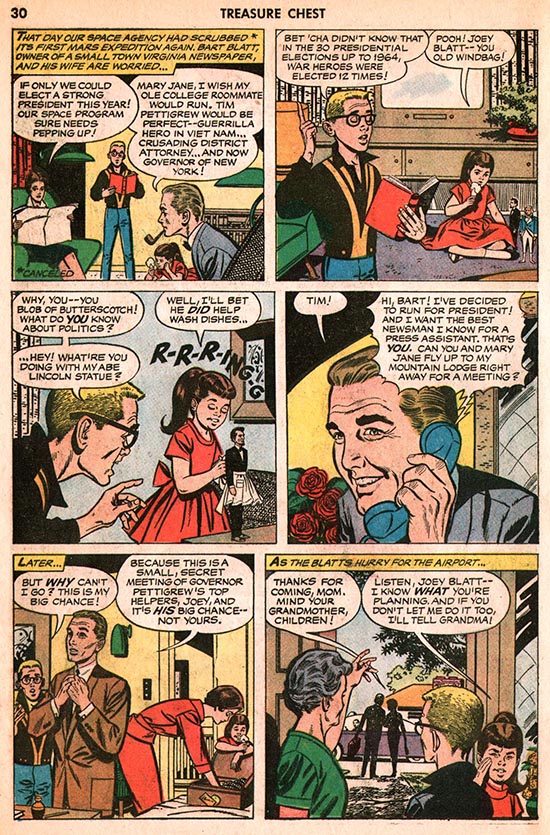 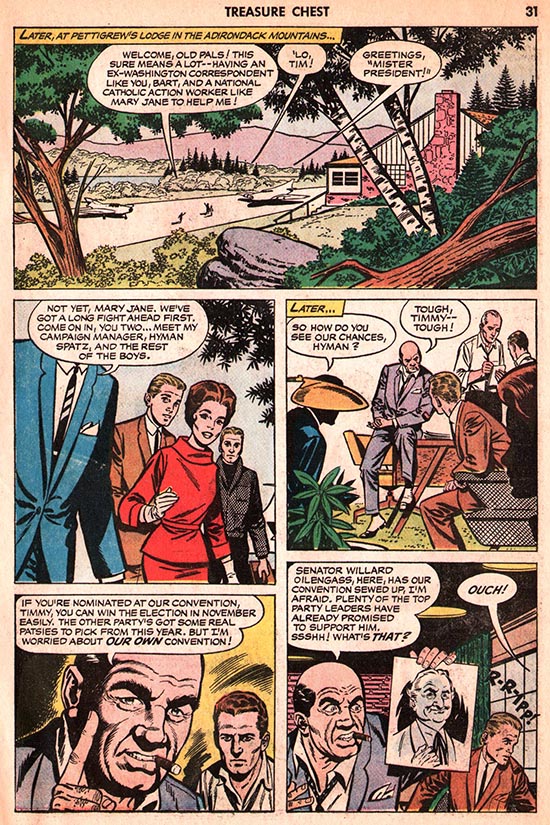 ...with a candidate who sounds similar to the then-recently assassinated John F Kennedy!
He's a war hero who already held political office, and a Catholic in good standing! 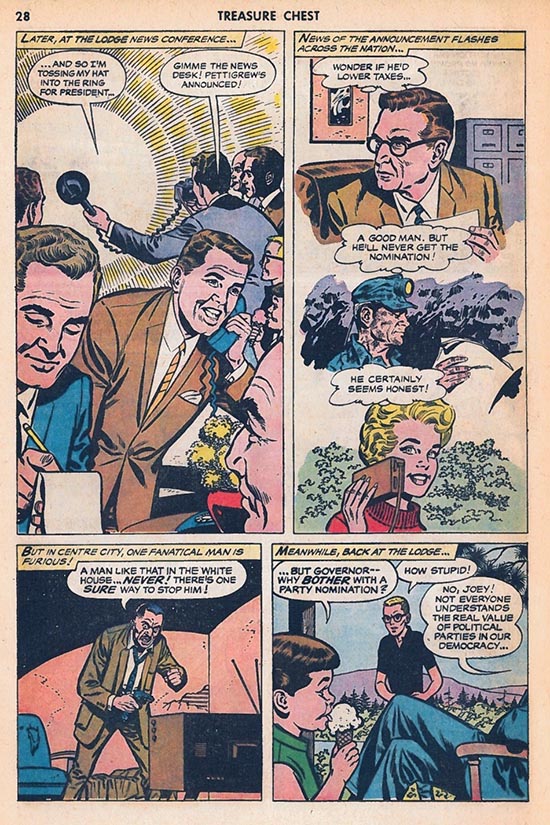 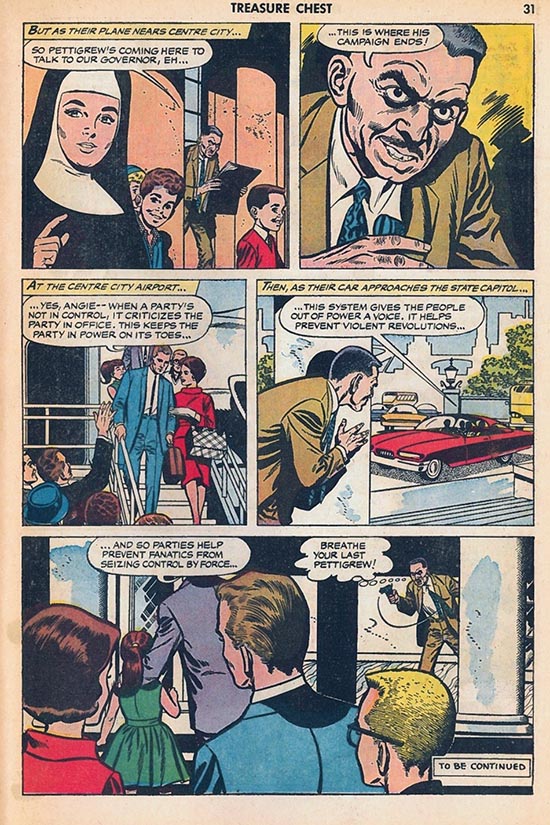 Considering JFK had been killed less than a year before this saw print, it was pretty daring for the publishers to show something like this to schoolkids! 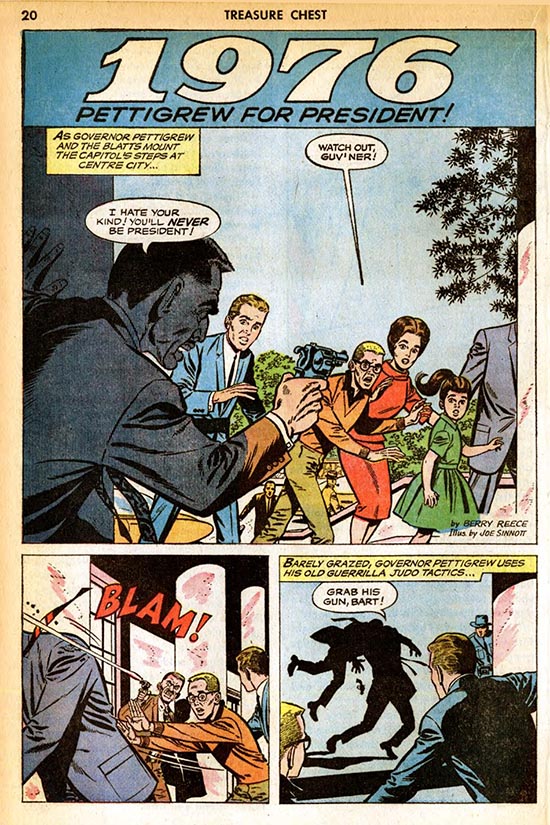 But this potential Prez shows that, even without the Secret Service, he's not helpless!
What did the would-be assassin mean by "your kind"?
Considering this was a Catholic-oriented periodical, and fear of a "papist" being the most powerful man in America was used against Kennedy during the election in 1960, it's not unreasonable that Pettigrew's religion might be the reason he was targeted!
Overcoming numerous obstacles, Pettigrew reaches the stage of the last debate before his party's convention, where he easily handles his opponents... 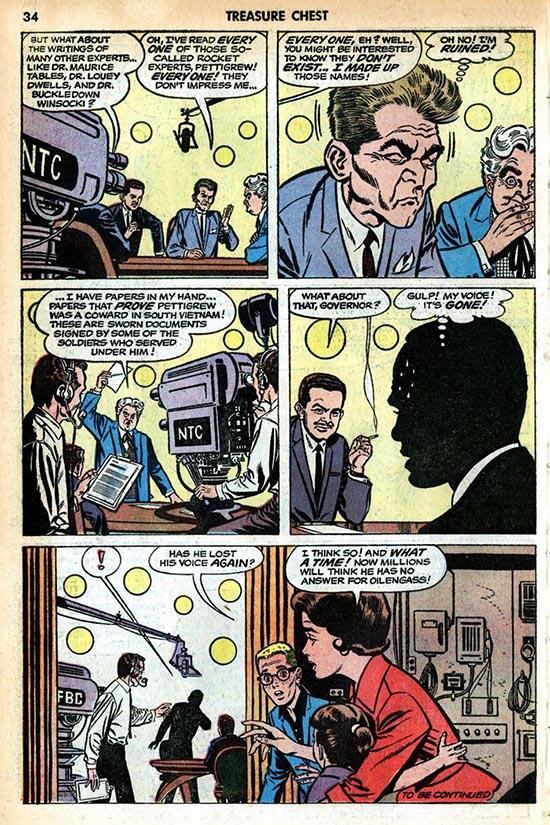 Is the "war hero" about to be exposed as a fraud...on national television?
(BTW, the reason he lost his voice was laryngitis due to a cold!) 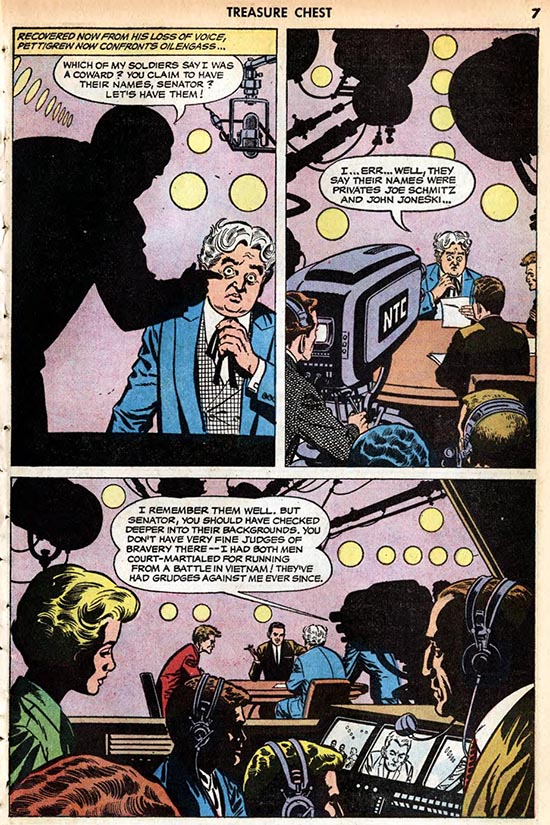 Wow!
"Swift boating" decades before it was tried on John Kerry!
Despite dirty tricks, slander, and assassination attempts, Pettigrew perseveres... 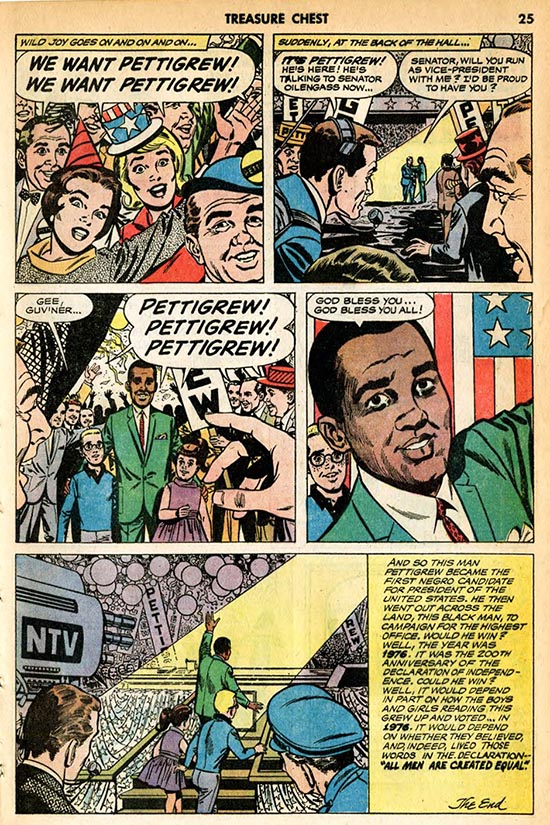 Written by Treasure Chest Editor Berry Reece and illustrated by legendary Marvel artist Joe Sinnott, this never-reprinted 10-issue serial (Treasure Chest V19N11 to V19N20) is considered one of the title's high points.
I've presented only excerpts here because the story runs over 50 pages spread over 10 chapters, and, since Pettigrew isn't revealed until the last page of the last chapter, I didn't believe most of the audience would hang on, even if I posted a chapter per day!
For those who do want to read the entire mini-series at one shot, just click HERE!
Please Support Atomic Kommie Comics!
Visit Amazon and Order... 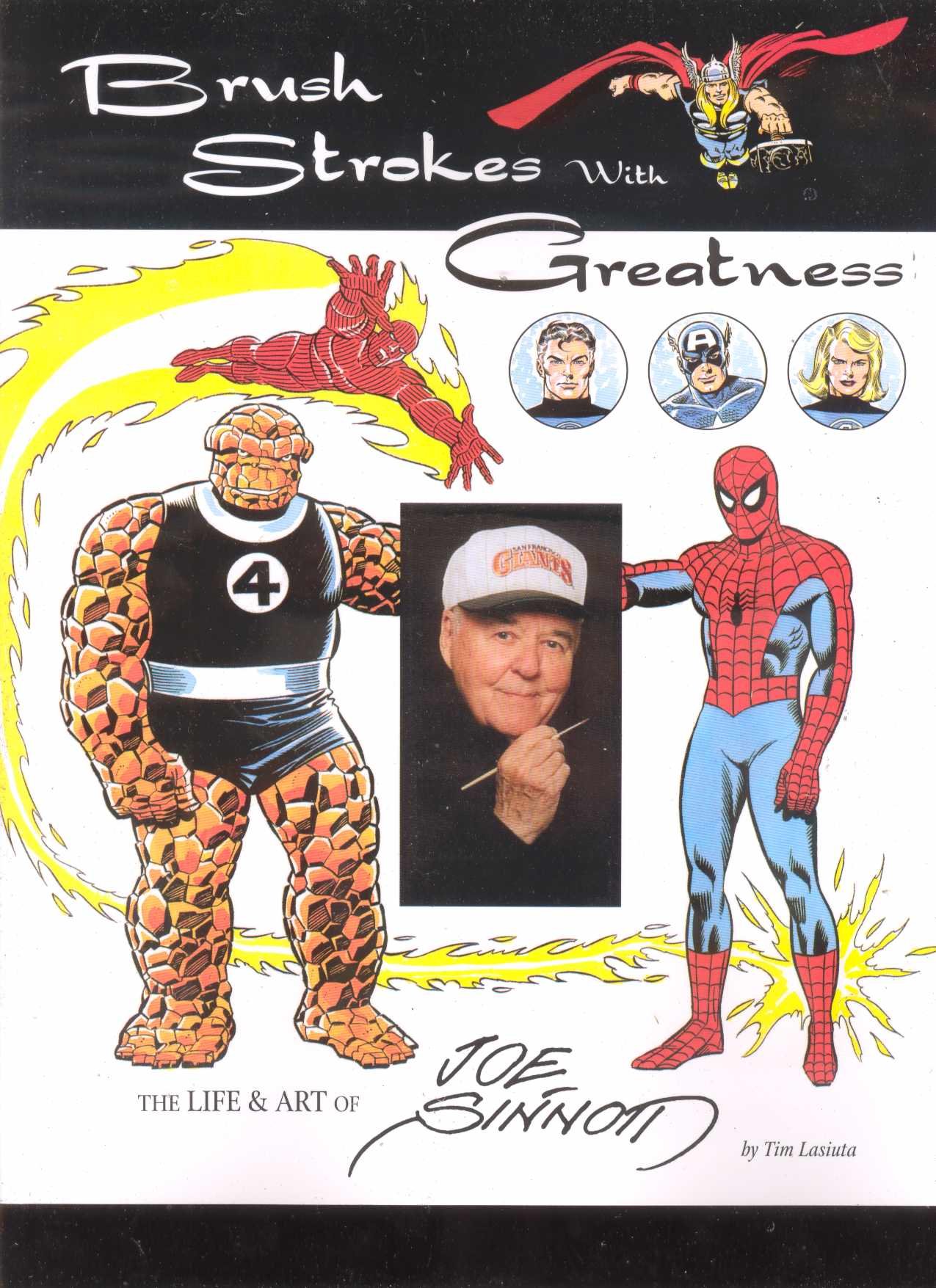