Holiday Reading Room: SNOW QUEEN "About the Mirror and Its Pieces" and "A Little Boy and a Little Girl"

With rumors swirling about a sequel film... 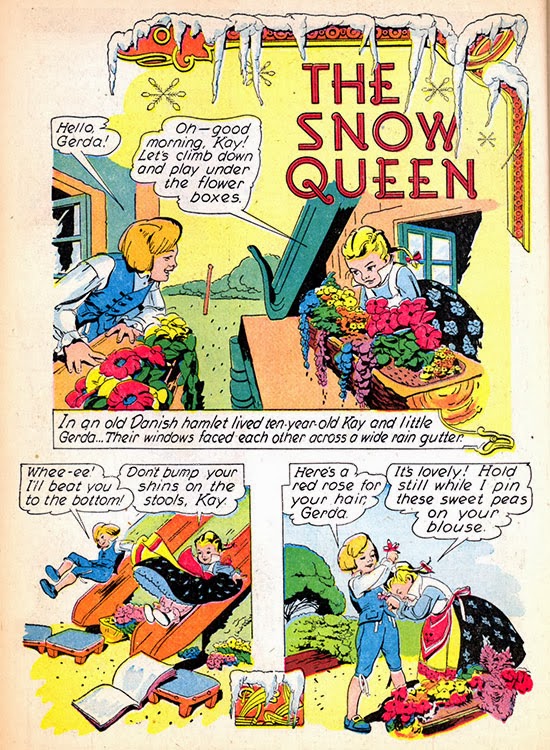 ...and an incredible about of merchandise offered this Christmas for the animated film, Frozen, we're re-presenting the classic (and extremely-different fairy tale the flick is based upon! 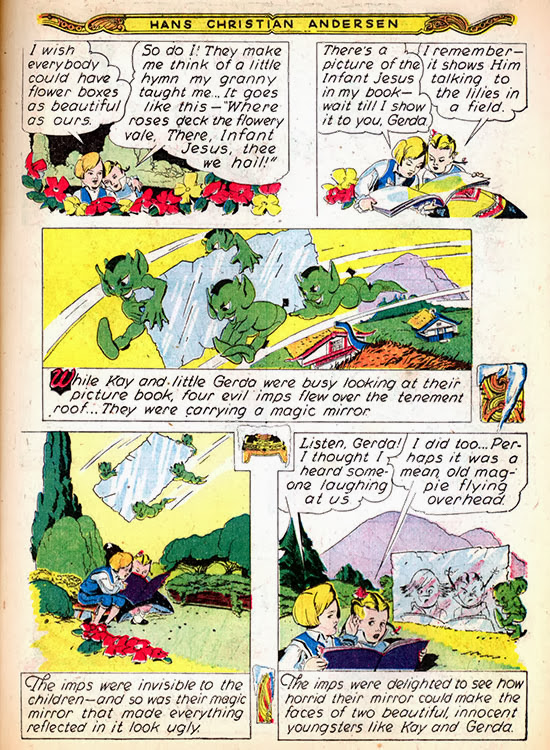 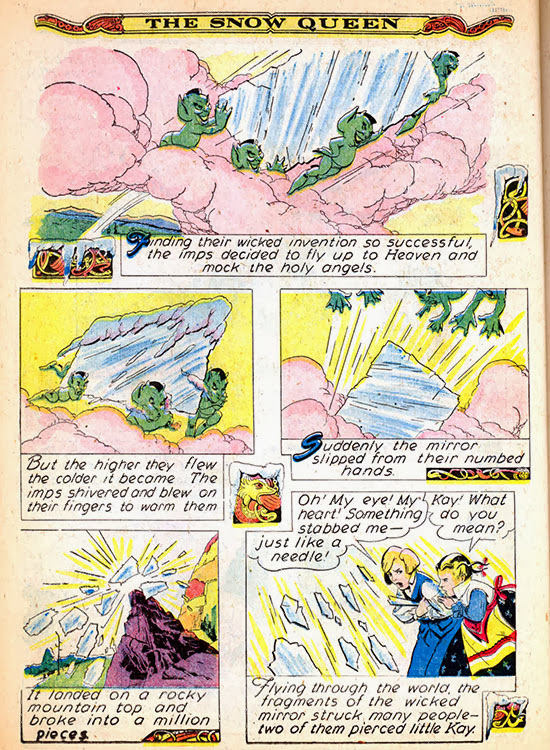 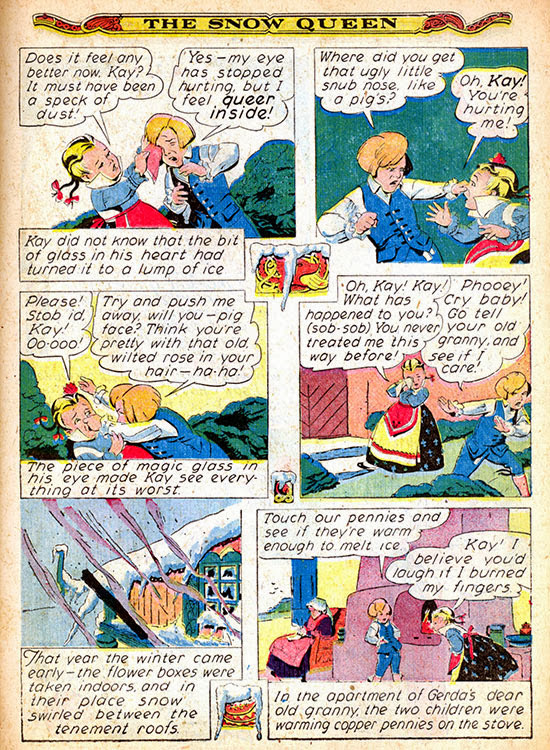 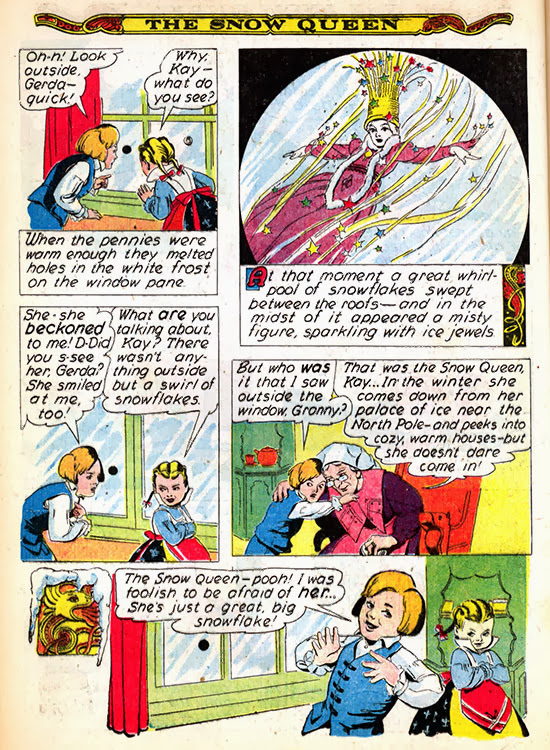 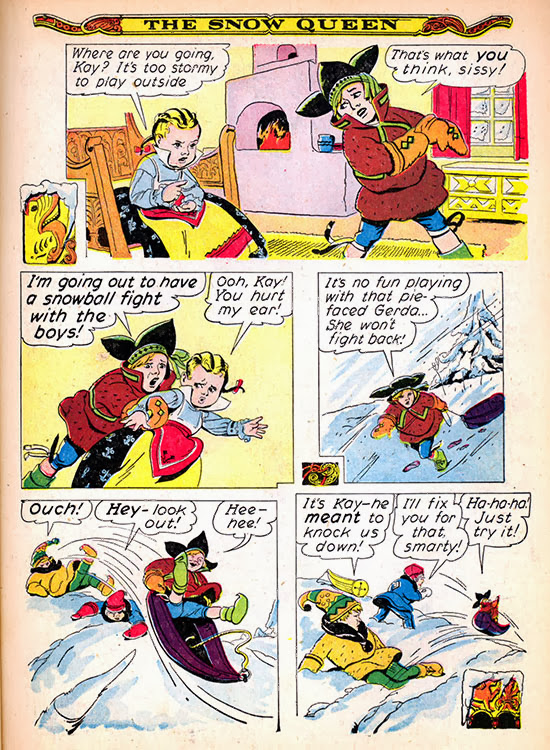 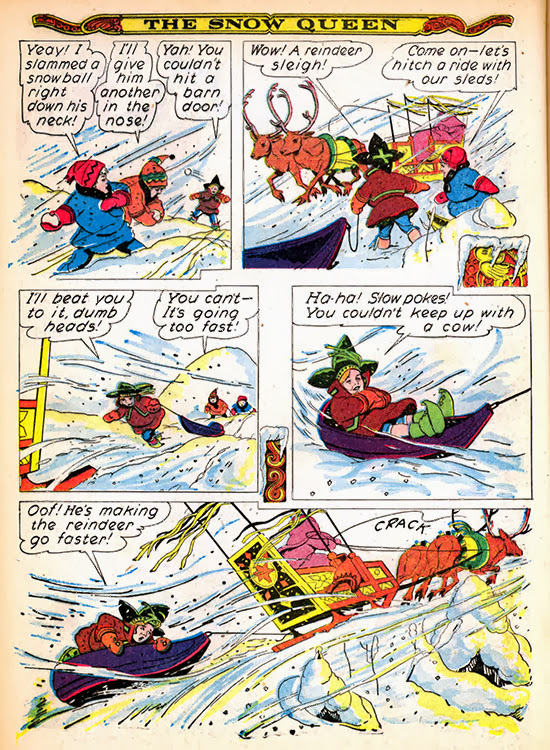 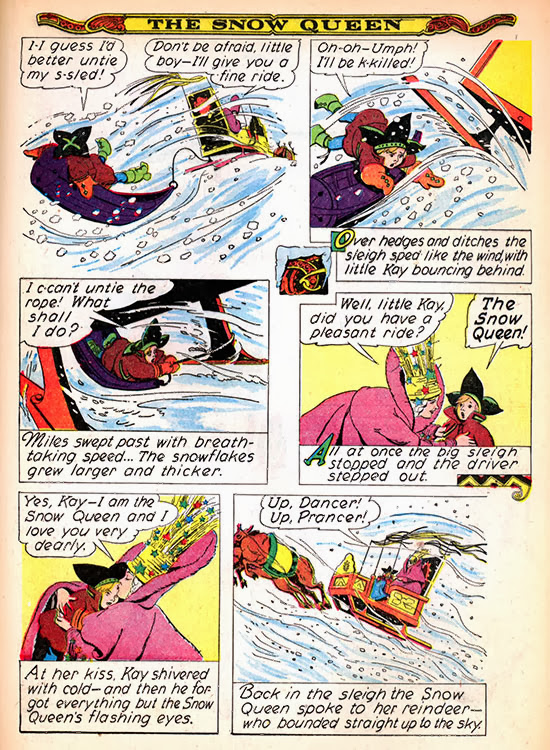 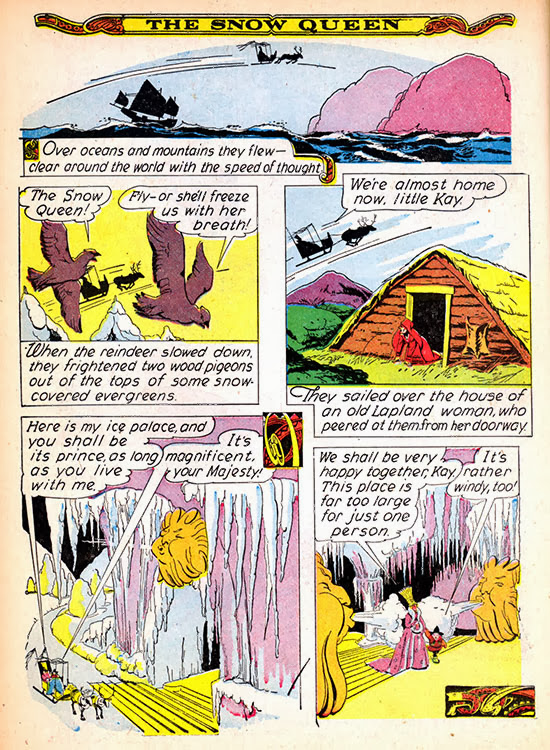 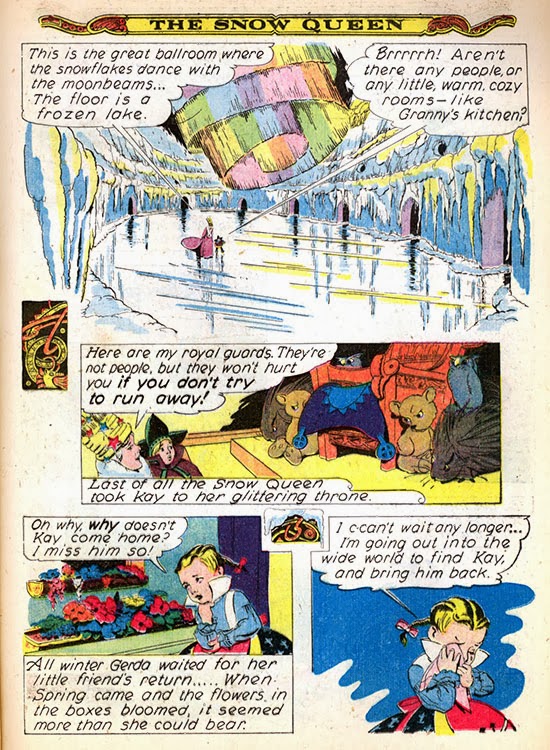 Tomorrow:
The Flower Garden of the Woman Who Knew Magic
Written by Gaylord Du Bois and illustrated by Lea Bing, this never-reprinted tale from Dell's Fairy Tale Parade #9 (1943) is the only comic book adaptation of the Hand Christian Andersen fairy tale!
(The currently-available graphic novel... 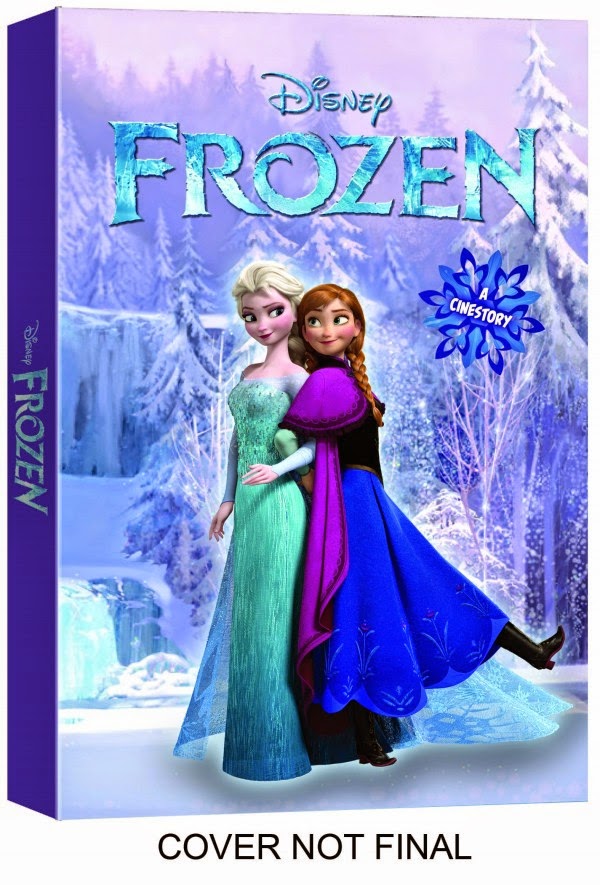 Christmas Greeting Cards
Not Available in Stores!
Digitally-restored and remastered from the original comics/book/posters!
Single Cards
Normally $4.99
Now almost half-price
at only $2.99!

A Christmas Carol
21 designs including the 1st Edition, the Arthur Rackham-illustrated edition, and the 1951 movie! 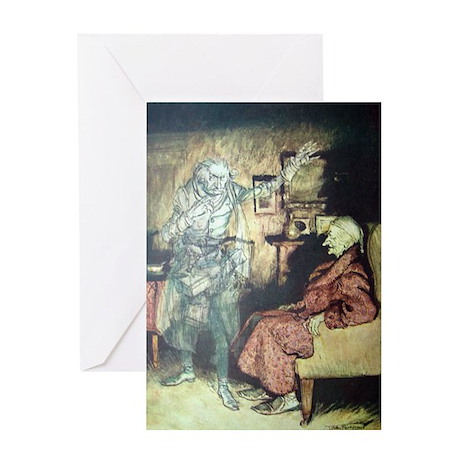 Santa Claus: the Man Himself
21 designs that will bring back fond childhood memories of the 1950s and '60s! 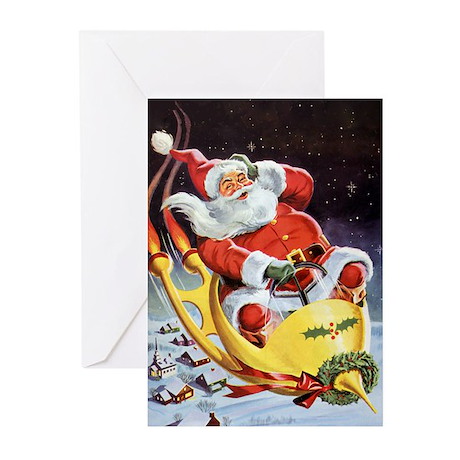 Santa Claus Conquers the Martians
He's the jolly old elf in a red suit
They are big green men from Mars with an even bigger robot!
Before Nightmare before Christmas they were the stars of the weirdest Christmas movie EVER!
Choose the comic book cover or two different poster designs! 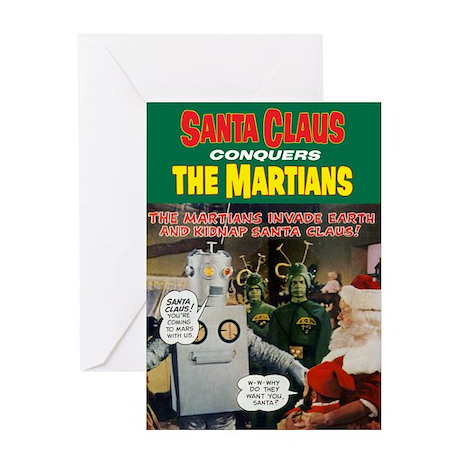 Christmas in the Comics
Comics characters from the Golden Age to the Bronze Age celebrate Xmas in their own unique way. 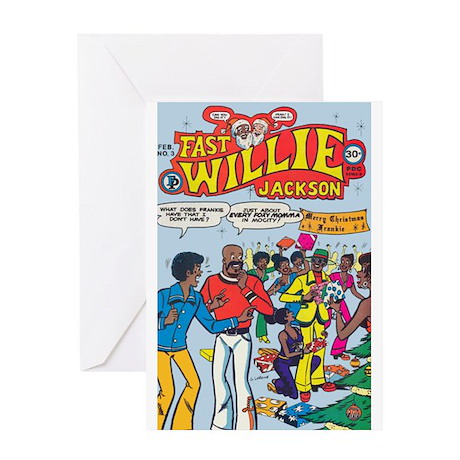 The Secret of Santa Claus aka St. Nick aka Kris Kringle aka Father Christmas 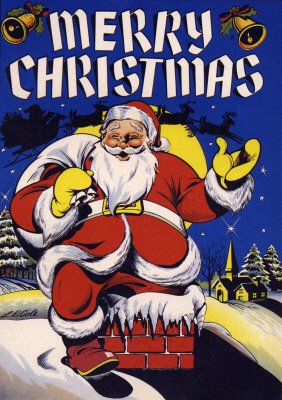 DID YOU KNOW...the image of Santa Claus, as we Americans know it, is based on the work of two artists over 70 years apart?

1) Thomas Nast, who illustrated the first published version of Clement Clark Moore's The Night Before Christmas in the 1860s 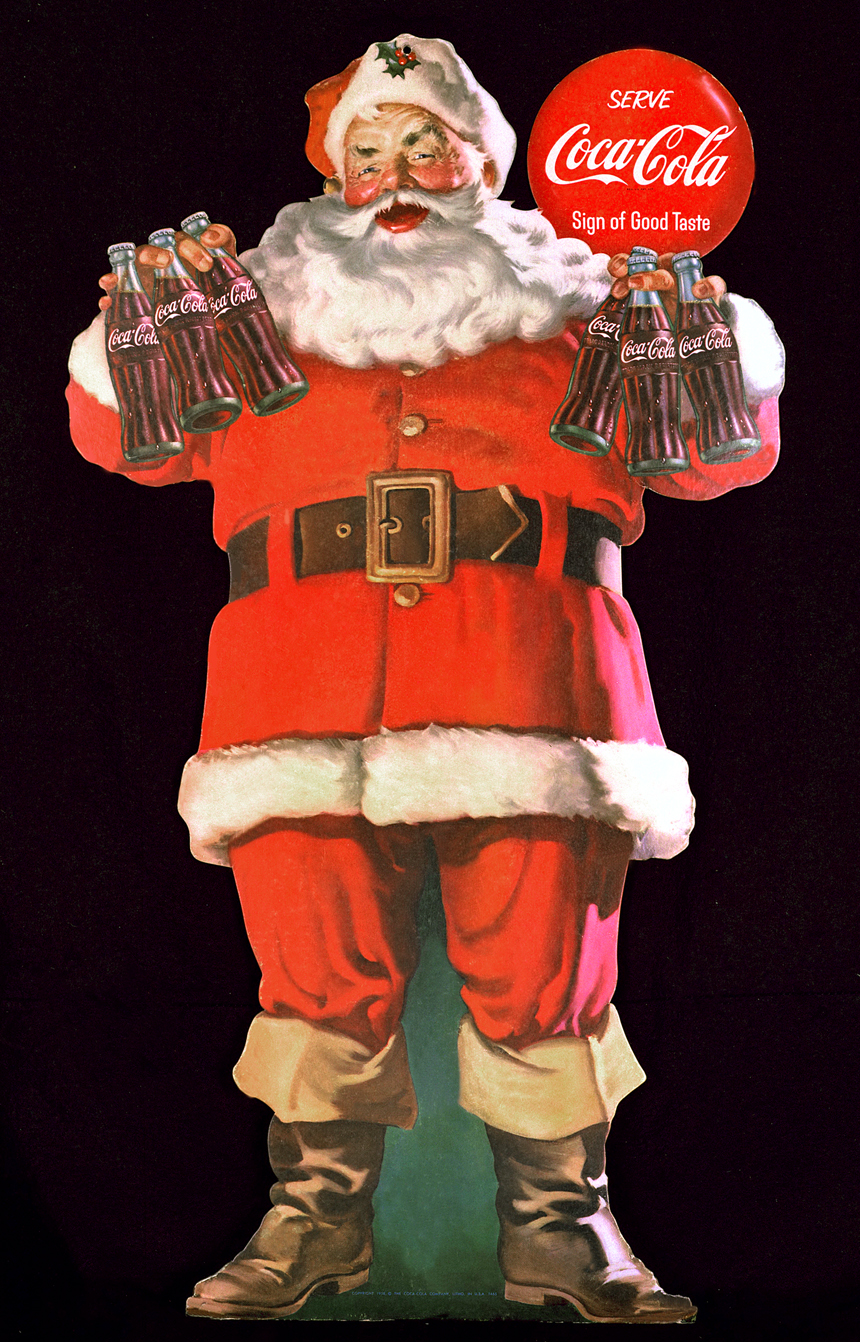 2) Haddon Sundblom, who took Nast's visual concepts, refined them, and used them to illustrate Coca-Cola's Christmas advertising campaigns from the 1930s onward!
TRIVIA:
Both Nast and Sundblom are equally famous for their other artistic accomplishments...
Nast was primarily a political cartoonist, whose illustrations of New York's "Boss" Tweed were considered the main reason the corrupt politician was forced from office!
Sundblom also created the image of the Quaker Oats man, and was a noted pin-up girl artist! (In fact, his last published artwork was a pin up girl semi-dressed in a Santa outfit for Playboy's December, 1972 cover!) 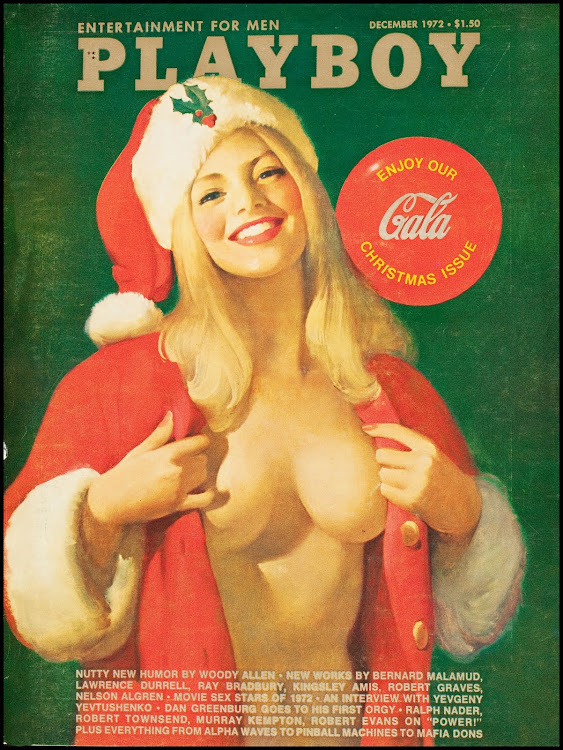 We at Atomic Kommie Comics™ offer a dozen different renderings of 'ol Kris Kringle which follow in the visual tradition of Nast and Sundblom, on a host of Cool Christmas™ collectibles ranging from tree ornaments to hot cocoa mugs to snugglies, sweatshirts and hoodies for kids and adults!
While they range from paintings to comic book cover art, they all feature the "classic" image of Santa known to Baby Boomers, Gen Xers, and Millennials!
So give your "special someone", whether they're a spouse, lover, friend, or relative, a warm feeling this Christmas with a kool kollectible featuring the personification of the Christmas Spirit--Santa Claus!
Posted by Britt Reid at 11/27/2014 01:01:00 AM No comments:

Reading Room STORIES BEHIND THE STARS "Hydra, the Immortal Monster"

Here's a popular mythological creature who's been "retconned" in movies and tv... 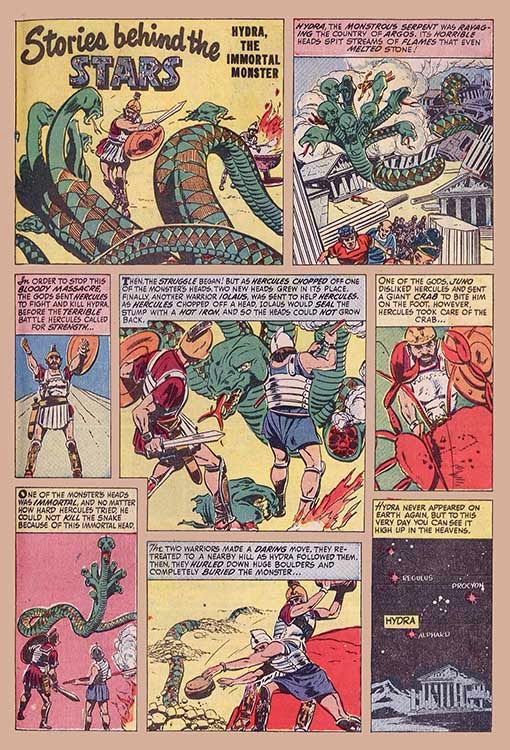 Ever wonder what the actual legend behind Clash of the Titans was? 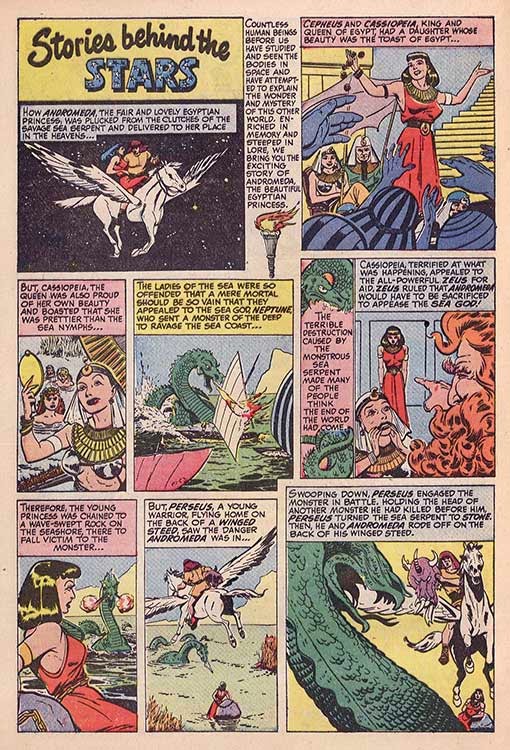 This Bob Powell-illustrated, never-reprinted feature from Harvey's Flash Gordon #3 (1950) explains the myth!
You'll note the "monster" is not the movie's Kraken, which was a mythological Norse creature based on sightings of huge octopi.
Ray Harryhausen let his imagination run wild, producing a far more interesting creature than the usual fire-breathing lizard.

An ongoing feature about the mythological origins of the constellations... 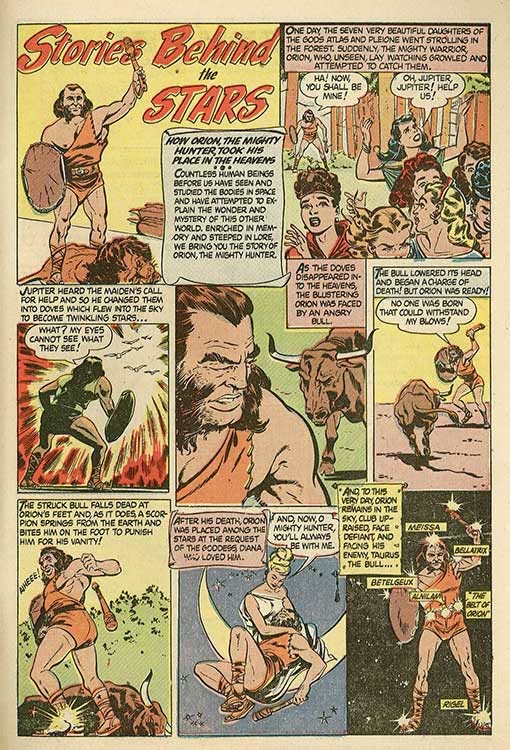 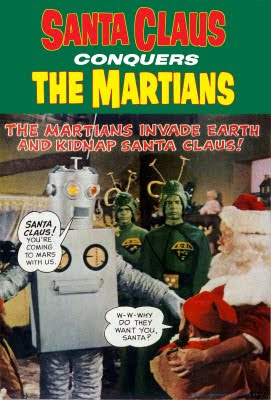 Santa Claus Conquers the Martians was filmed in 1964 in that bastion of cinema, Long Island, New York (in an unused aircraft hangar).
Starring a host of tv and b-movie actors including handsome-but-stiff Leonard Hicks as the good Martian leader Kimar, 60s villain/voiceover artist Vincent Beck (who did lots of work for Irwin Allen's sci-fi shows) as the film's mustache-twirling Martian villain, Voldar, and John Call as a pretty damn convincing Santa Claus, the flick is touted these days as the debut of future talentless chantuse Pia Zadora as Martian Kid Girmar. (Thankfully, she has rather limited screen time.)

The plot's pretty simple.
The children of Mars are in a funk.
The adult Martians deduce it's due to the childrens' strict and sterile upbringing, and that to "normalize" them, the kids must have fun!
And what could be more fun than celebrating Christmas?
But, to do a proper Christmas, you need a Santa Claus!
Thus, the Martians journey to Earth to kidnap Santa Claus and force him to create a Christmas celebration on Mars!
Then, as they say in TV Guide, hilarity ensues! (well, sorta)

As an example of low-budget filmmaking, it's actually pretty effective.
Every penny (what few of them they had) is up on the screen.
The costuming and Santa's Workshop and Mars sets are as good as those of tv shows of the period.
(The Martian robot is probably the weakest element from a design and execution standpoint, but nobody's perfect!)
There's extensive use of stock footage (from Dr. Strangelove, no less).
And, the idea to utilize the then-popular Wham-O Air Blaster toy guns as Martian weapons was either a stroke of marketing genius or clever use of limited funds. Either way, sales of the guns shot thru the roof after the film hit the kiddie matinee circuit!

And you just knew we at Atomic Kommie Comics™ were going to include Santa Claus Conquers the Martians in our Cool Christmas collection on stuff including kid and adult sweatshirts, hoodies, mugs and coasters, tree ornaments, throw blankets and snugglies, and greeting cards!
BTW: The image is from the comic book tie-in. There was also a 45 single of the theme, a spoken-word LP album of the movie's dialogue, and a novelization, all of which are HTF and expensive when you do find them!
Now I can't get that damn theme our of my head..."Hoo-ray for Santy Claus..." AARRRGGGHHH!

FREE: a couple of early holiday gifts from us to you:
LINK to the suprisingly well-done comics adaptation of the movie!
LINK to a download the film itself in various formats!
Now it can drive YOU nuts, too!
Posted by Britt Reid at 11/23/2014 11:10:00 AM No comments: