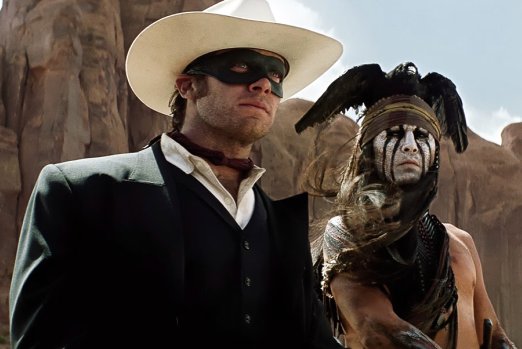 With a new (and somewhat controversial) Lone Ranger (and Tonto) movie opening next Wednesday, our brother blog, Western Comics Adventures™ will be dedicating July to entries about the most famous Western duo in fiction (whom we've covered a number of times previously).
This Monday, you'll see a classic feature on Tonto; his biography, cultural background, and skills & abilities, that was consistent through the various versions in radio, tv, comics, pulps (yes, pulps) and movies up to the late 1990s!
There'll also be entries about the incarnations of the duo in various media with lots of hard-to-find stuff to link to and/or download.
And maybe an explanation for the bird on Johnny Depp's head...
Posted by Britt Reid at 6/29/2013 12:46:00 PM No comments:

Due to problems with Picasa, we'll be unable to do our scheduled post for today.
Whenever we try to access Picasa, a popup forcing us to join Google+ or we can't access our albums "pops-up"!
We hope to resolve the problem (or figure out a workaround) by Monday.
Thank you for your patience.
Posted by Britt Reid at 6/28/2013 12:14:00 PM No comments: 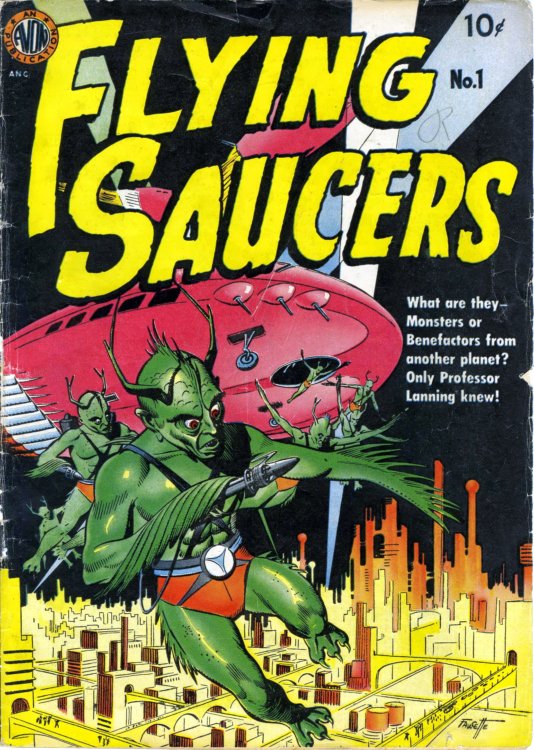 ...to the story we've been running the past few days.
Oddly, when the issue was reprinted a couple of years later, the art was altered... 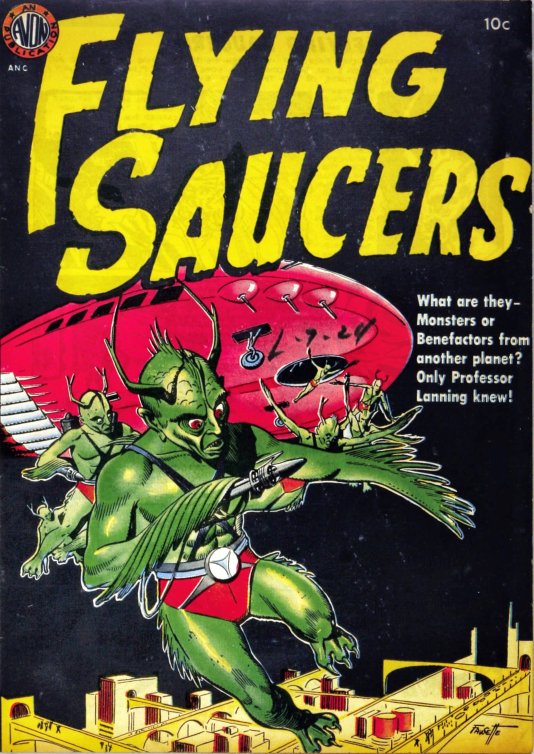 When Last We Left Ross Lanning...
...he was rescued by the aliens from foreign spies who wanted the secret of alien technology! 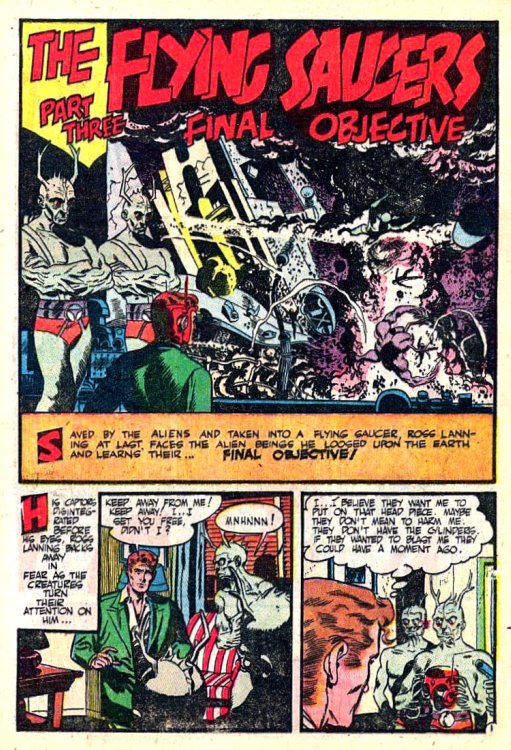 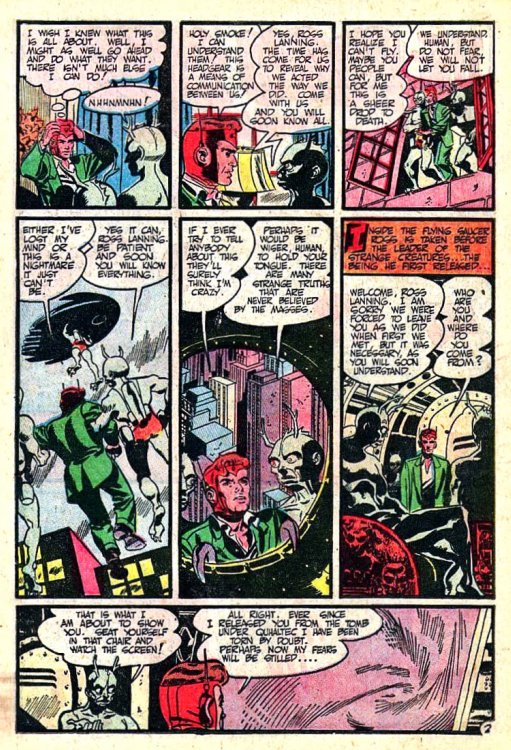 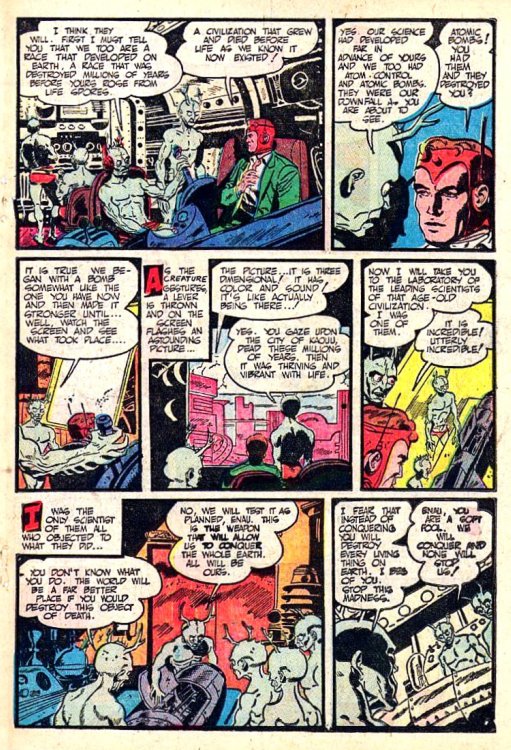 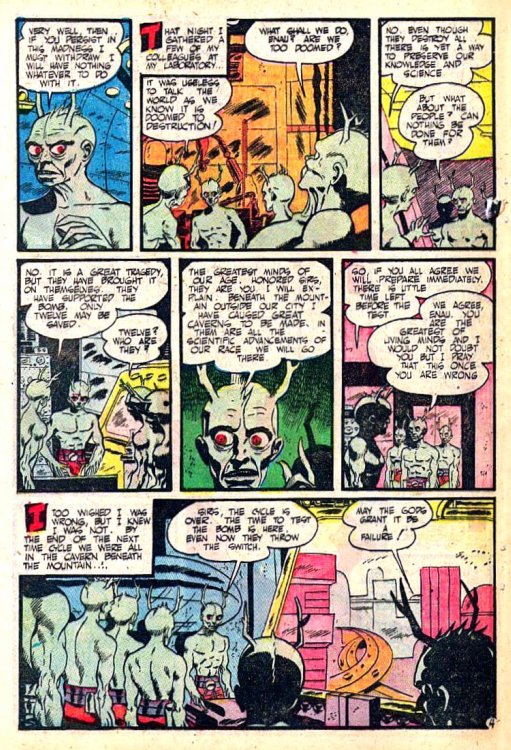 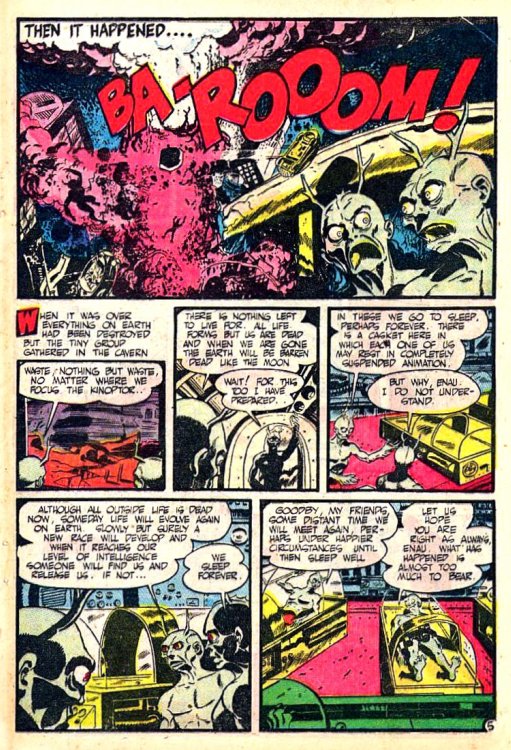 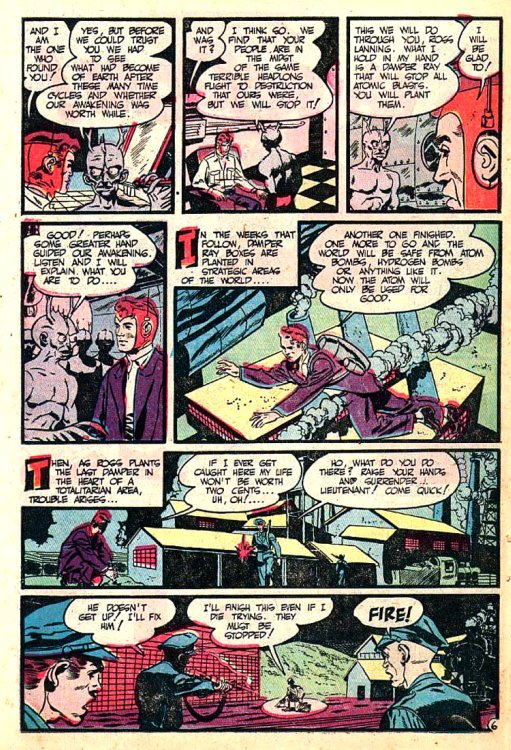 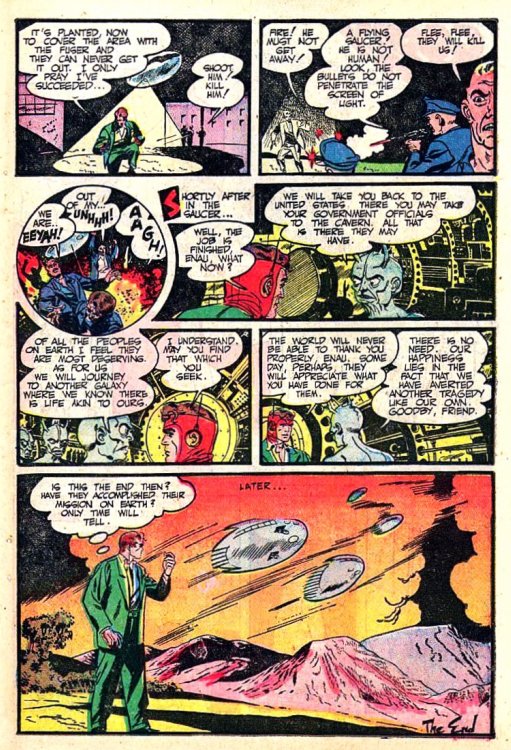 Inspired by the flying saucer craze of the late 1940s-early 1950s, this 1950 Wally Wood-illustrated book was one of many one-shot titles from Avon Comics during their short, but prolific existence.
Visit Our 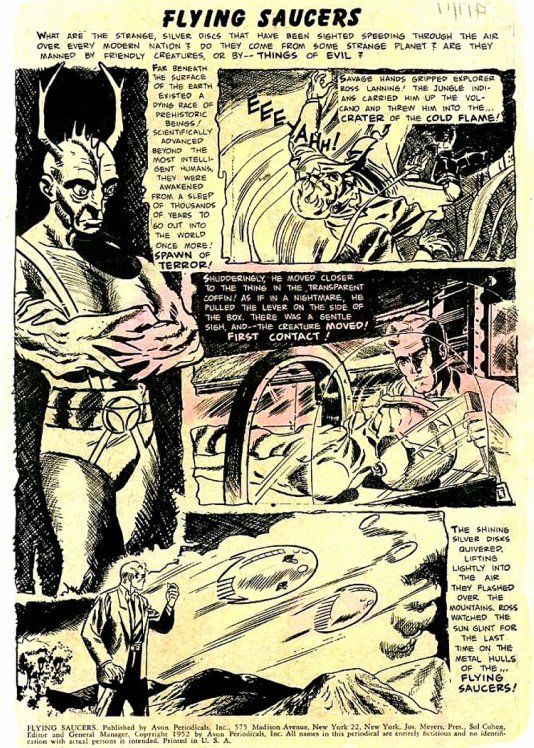 ...well, between the kool inside front cover (with art by Wally Wood & an unknown inker) above, and the first paragraph below, you have all you need to follow the tale, so dive right in... 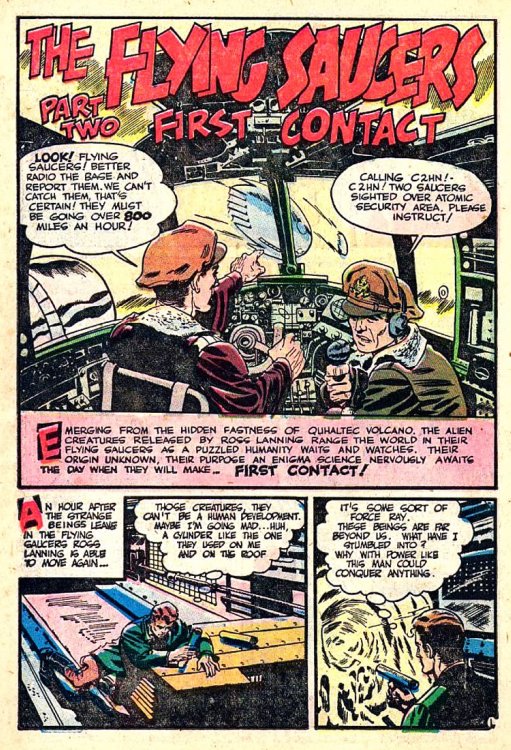 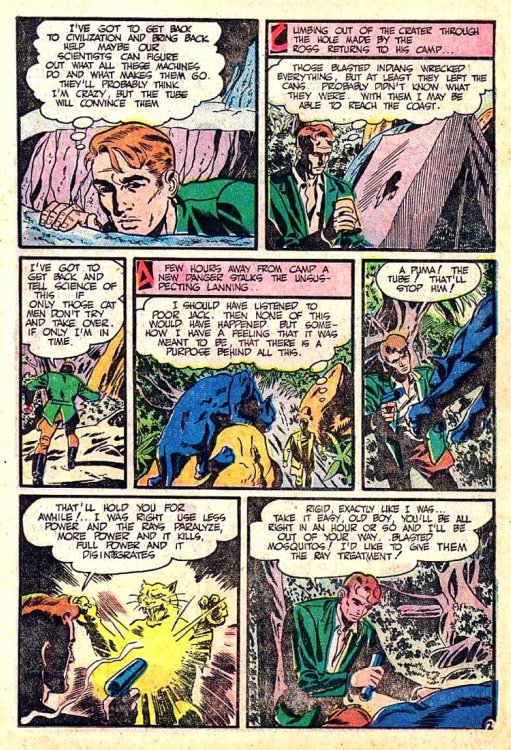 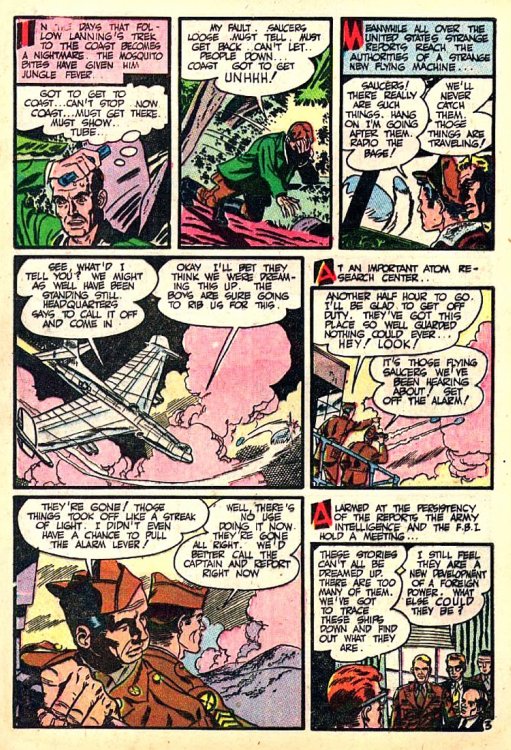 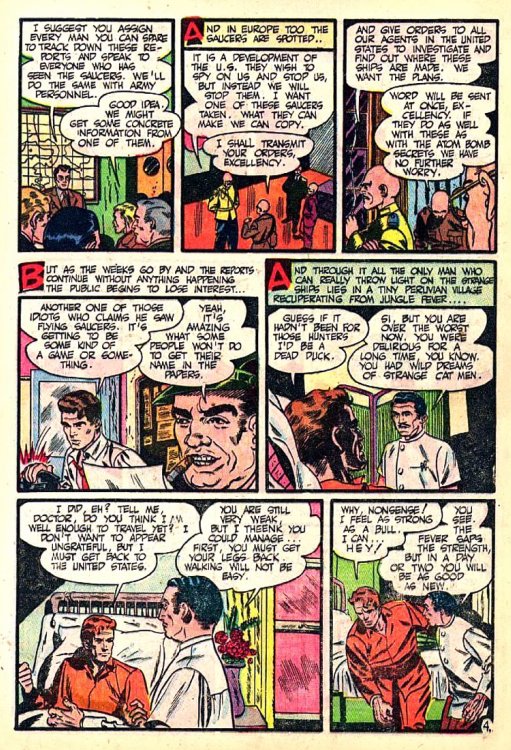 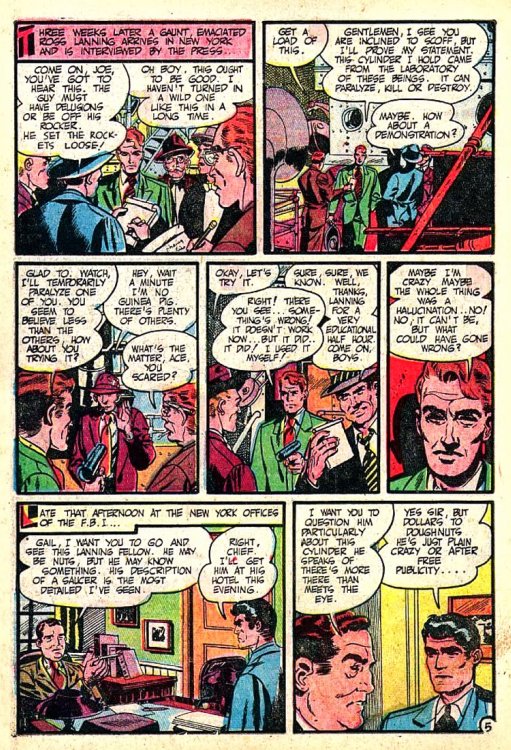 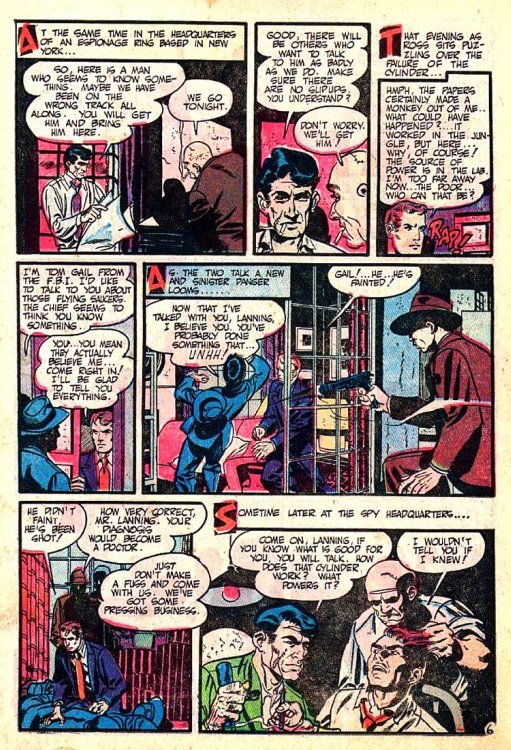 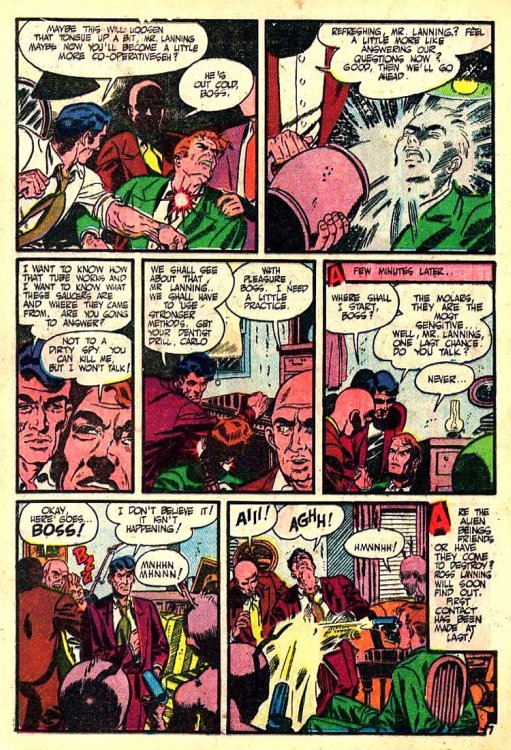 Tomorrow:
Final Objective!
Inspired by the flying saucer craze of the late 1940s-early 1950s, this 1950 Wally Wood-illustrated book was one of many one-shot titles from Avon Comics during their short, but prolific existence.
Visit Our

Was Erich Von Däniken the first to tie flying saucers to ancient civilizations? 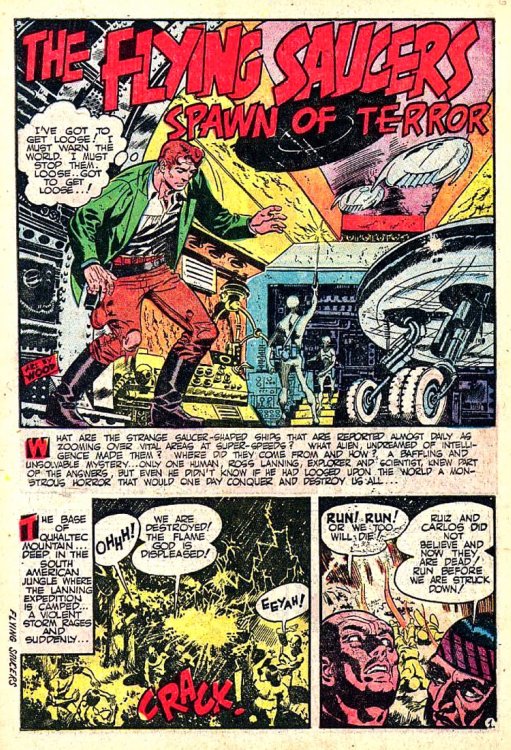 Nope!
The idea of aliens visiting us in ancient times had been popular for as long as fantasy and science fiction have been around. 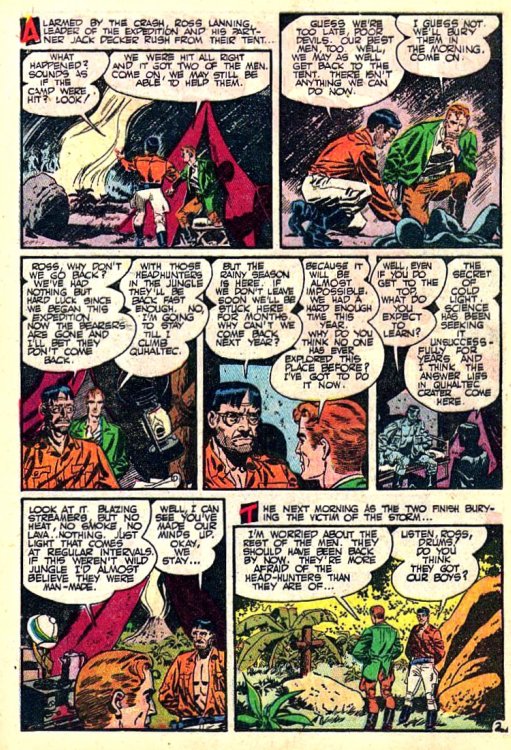 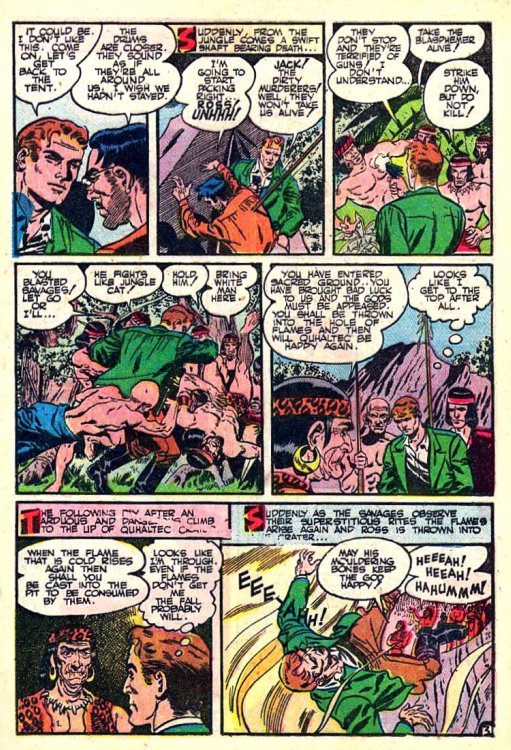 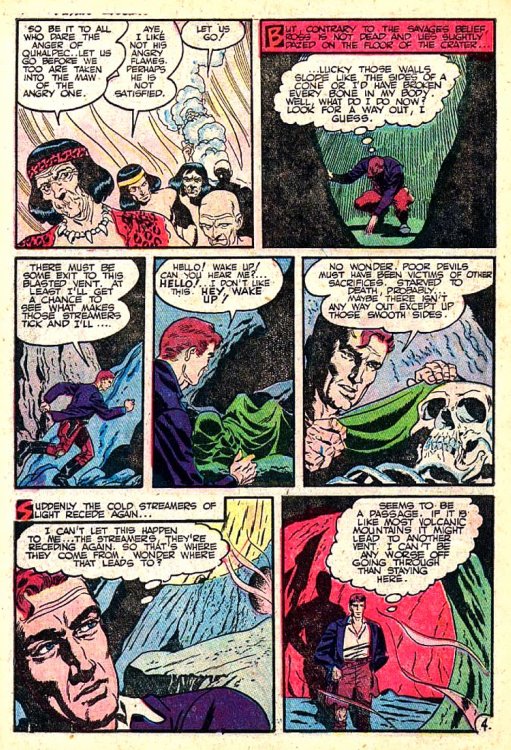 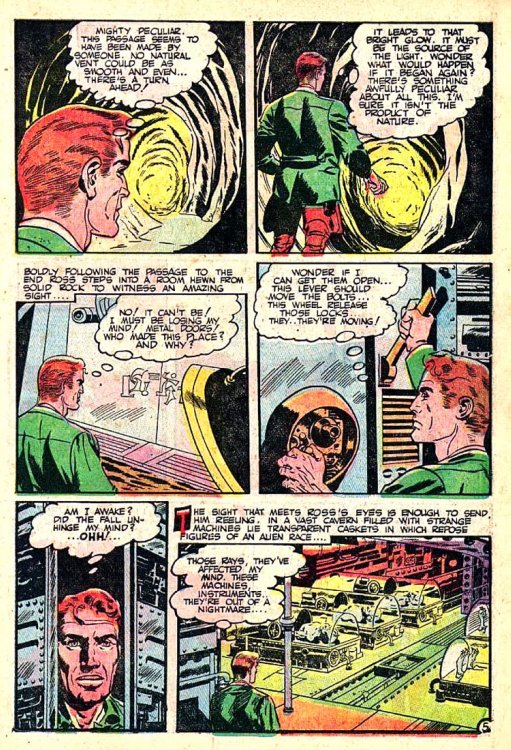 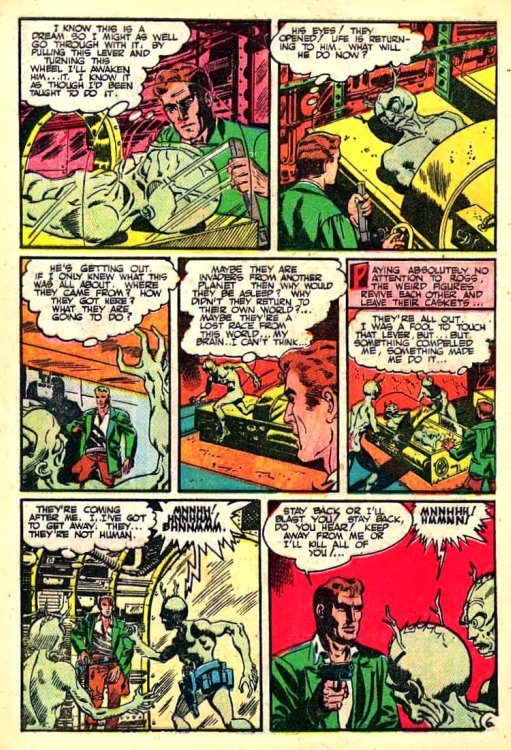 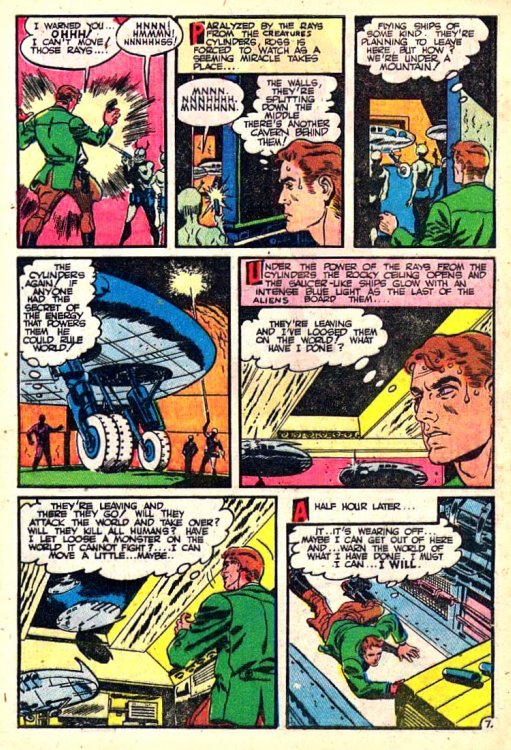 Tomorrow:
First Contact!
Inspired by the flying saucer craze of the late 1940s-early 1950s, this 1950 Wally Wood-illustrated book was one of many one-shot titles from Avon Comics during their short, but prolific existence.
Another one-shot (though it probably wasn't intended to be such), was Fawcett's Vic Torry and His Flying Saucer (1950).
Flying saucers also popped-up in almost every already-running comic book from funny animals to mysteries.
They even appeared in Charlton's Cowboy Western Comics, which changed it's name for a year to Space Western Comics to play up the connection!
Visit Our 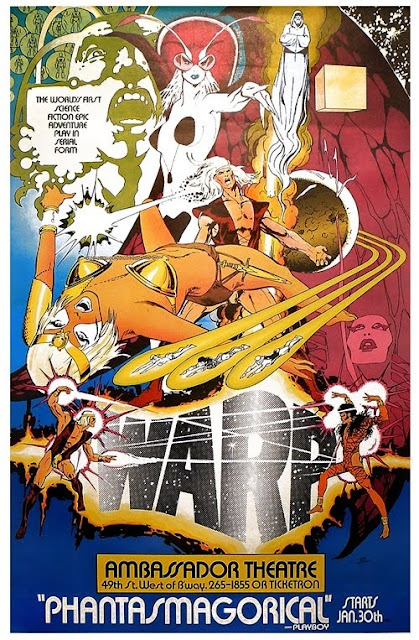 In 1971, Chicago's acclaimed Organic Theatre Company produced a trio of plays inspired by Marvel Comics, particularly Dr. Strange and Mighty Thor, under the umbrella title WARP!
Billing the trilogy as "the world's first science fiction epic-adventure play in serial form", the three plays did boffo box office and won numerous Chicago theatrical awards.
It seemed like a no-brainer to take the production to New York, where local talent could enhance both the production values and on-stage talent.
The first of the three plays, "My Battlefield! My Body!" opened in February, 1973.
Unfortunately, it closed that same month.
Considering the talent involved in this project, including original writer / director Stuart Gordon (ReAnimator), NY production art director Neal Adams (Batman / X-Men / Green Lantern & Green Arrow) and actors John Heard (Sopranos, Prison Break), Keith Szarabajka (Equalizer), Stephen Williams (X-Files, 21 Jump Street), it's astounding that it didn't take off like (dare I say) a rocket!
But, it didn't, and all that survives today are some playbills and the incredibly-hard to find poster, illustrated by Neal Adams!
We have one of these posters, acquired in the late 1970s, and decided to make a couple of shirts emblazoned with it for ourselves and friends. 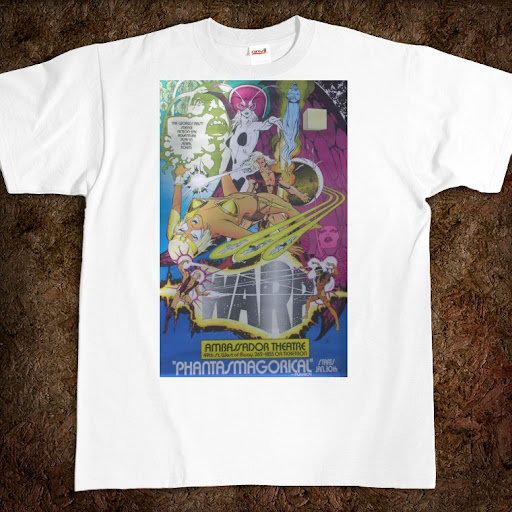 The response has been so overwhelming ("Where did you get that? Can I get one?") that we are now offering it to other pop culture aficinados!
If you're a fan of Broadway theatre, sci-fi, comics, or just like a kool shirt, have a look!
Or, if you'd like a reproduction poster, click HERE!