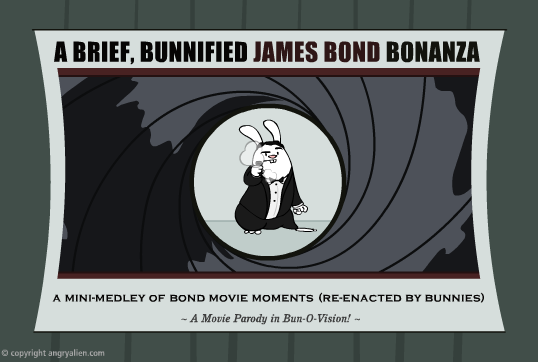 ...why not combine the two with James Bond hightlights as performed by animated bunnies...

With the 100th Anniversary of the sinking of the Titanic coming up... 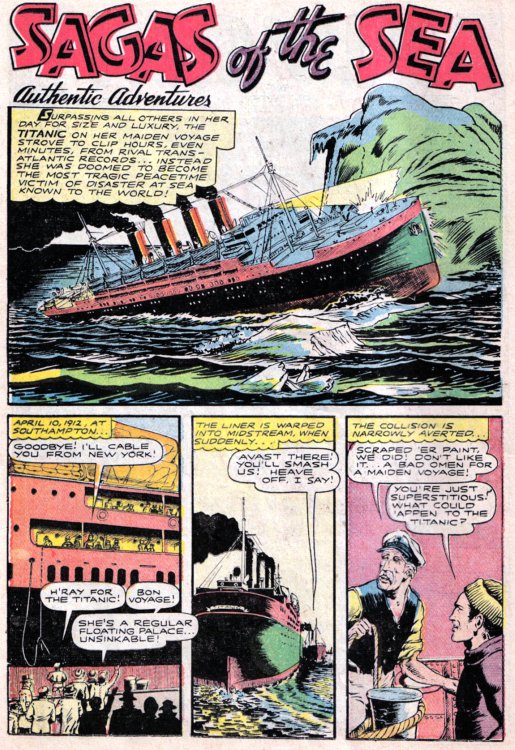 ...we thought it appropriate to present one of the surprisingly-few comic book versions of the sad tale of the "unsinkable" super-ship! 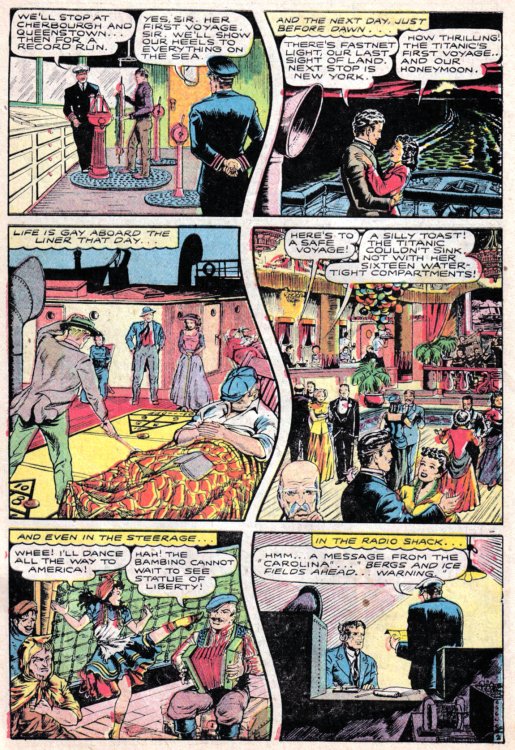 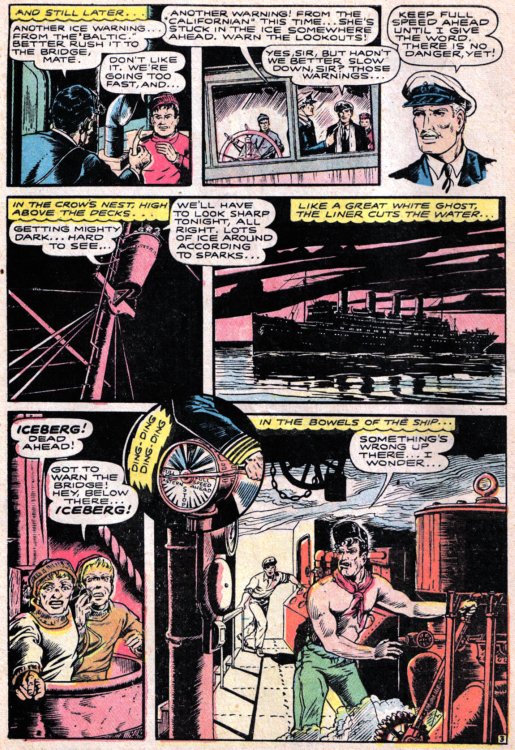 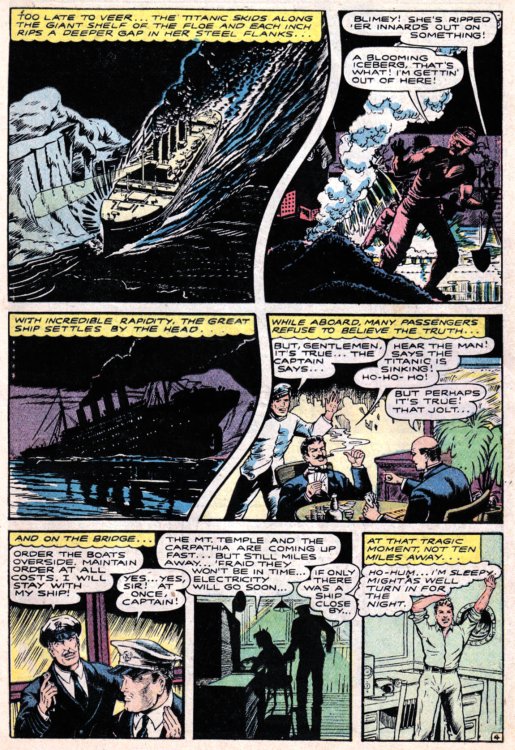 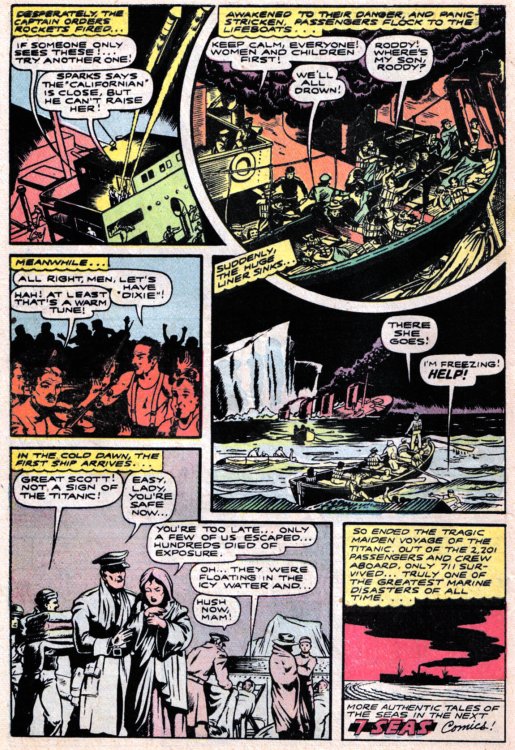 This tale from Seven Seas Comics #2 (1946), illustrated by Robert Webb, is derived from newspaper accounts of the disaster.
Seven Seas Comics was the longest-lasting of Leader Publications/Universal Phoenix Features' titles, publishing six issues of high-quality work by such notables as Matt Baker, Alex Blum, and a pre-EC Comics Al Feldstein!
The main feature was South Seas Girl, a jungle-girl strip featuring superb Good Girl art by Baker!
Robert Webb is best-known as one of the primary artists on the long-running Sheena: Queen of the Jungle for Fiction House.
Support Small Business
Visit Our ...why not pick up a few kool products featuring the classic Frazetta retro Buck Rogers art from their new banner? 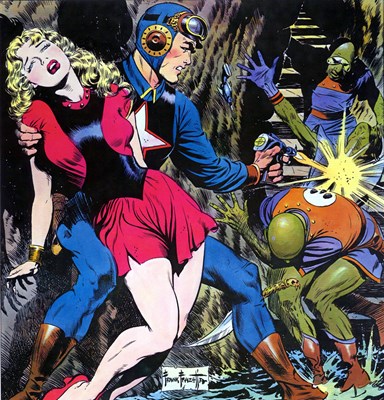 And don't forget out other Nerdist graphic spaceman goodies... 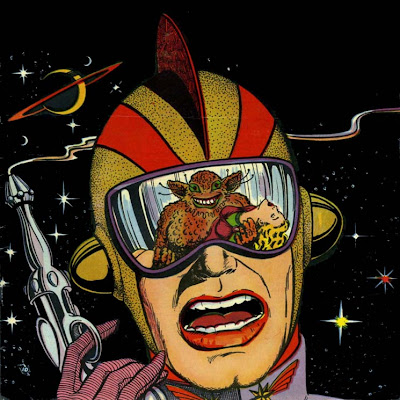 ...as seen on the set of the Nerdist tv show!

If Austin Powers had a sister in the Swingin' 60s, she would have been... 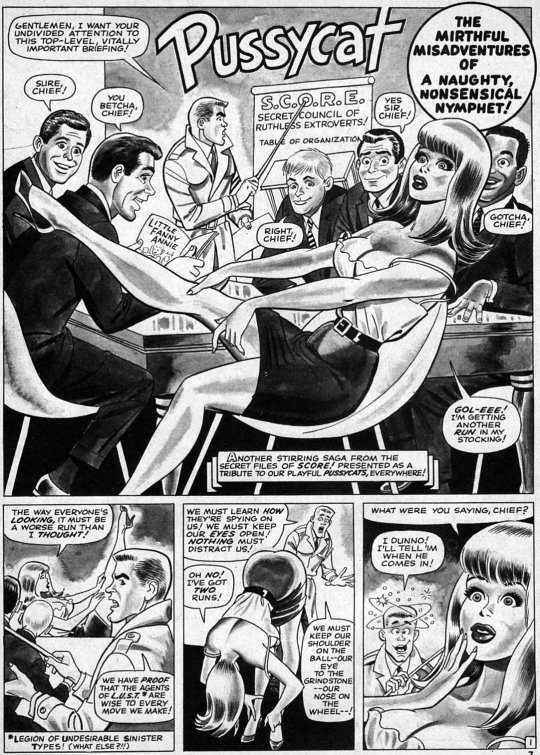 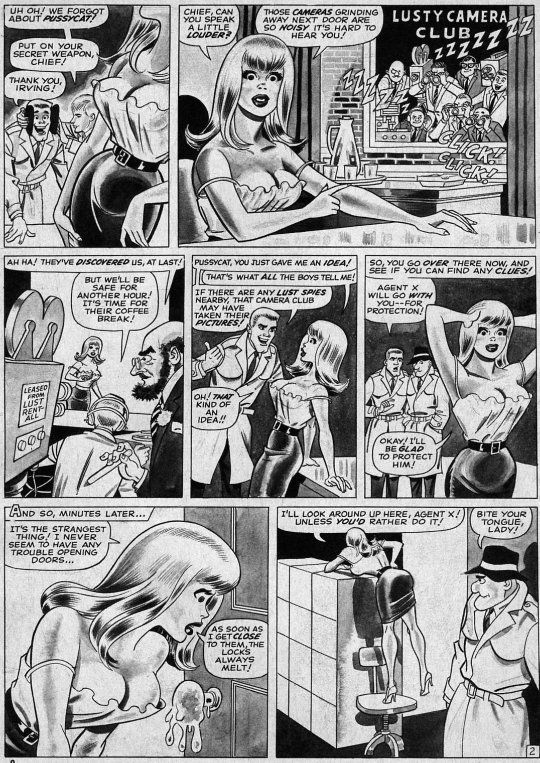 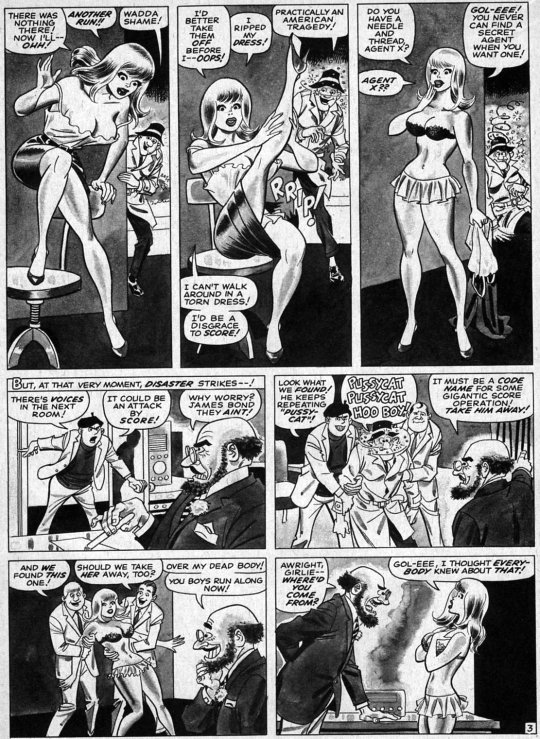 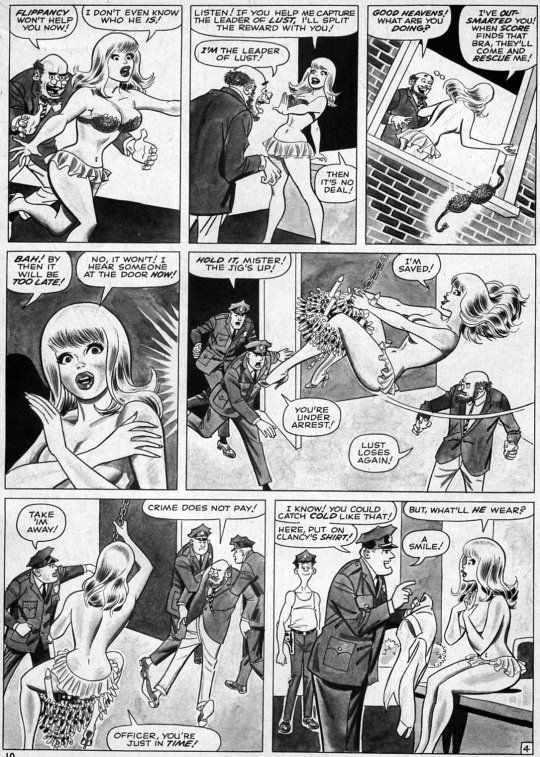 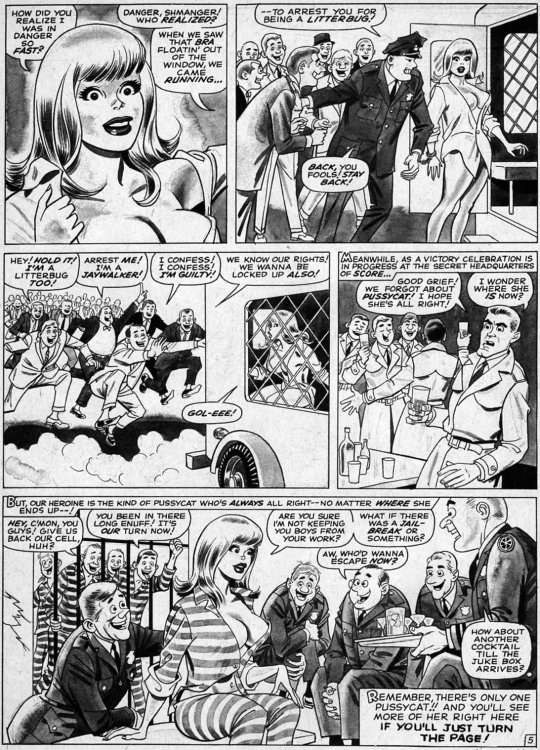 This tale originally appeared in Stag Annual #3 (1966), but this is from the one-shot PussyCat (1968) that reprinted her stories from various "laddy" magazines published by Martin Goodman, who also owned Marvel Comics.
The writer and artist are officially-unknown, but the scripter is probably Stan Lee or Larry Lieber, and the artist(s) probably include Stan Goldberg, Al Hartley, and Bill Ward.
Support Small Business!
Visit Our 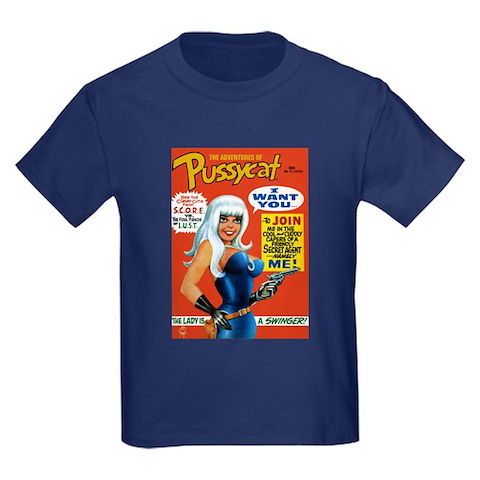 The 1950s, when heroic astronauts fought for Truth, Justice, and the American Way... 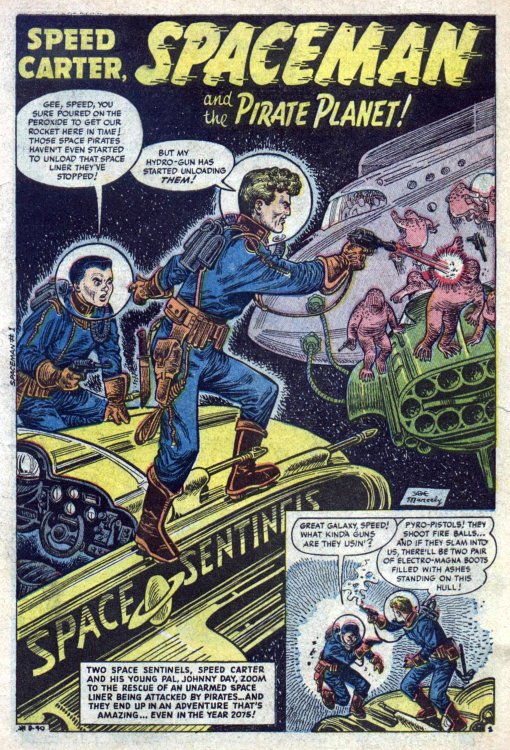 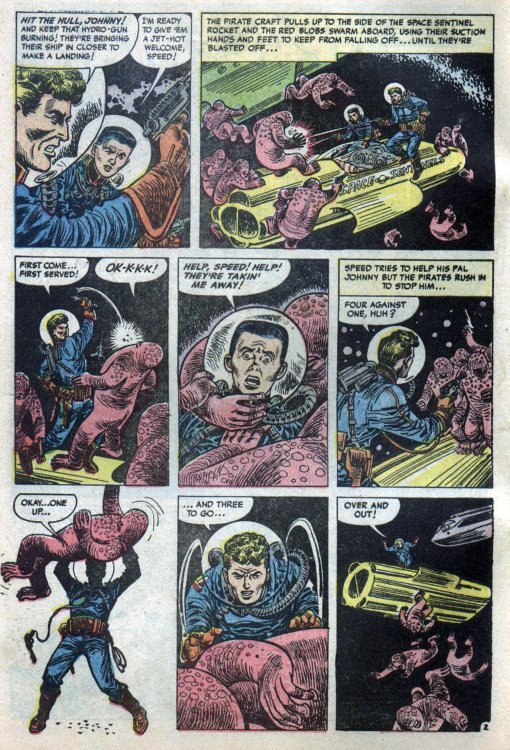 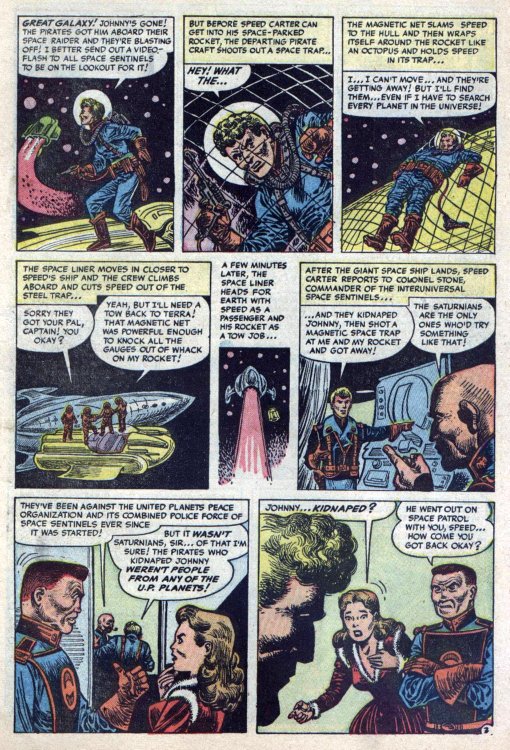 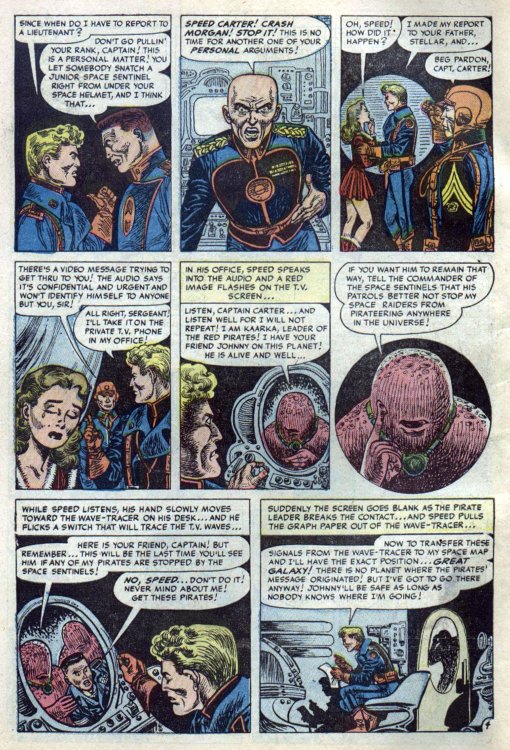 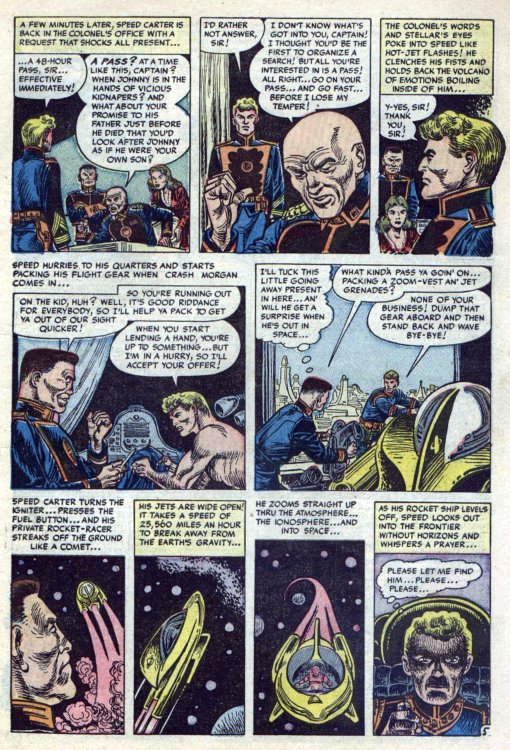 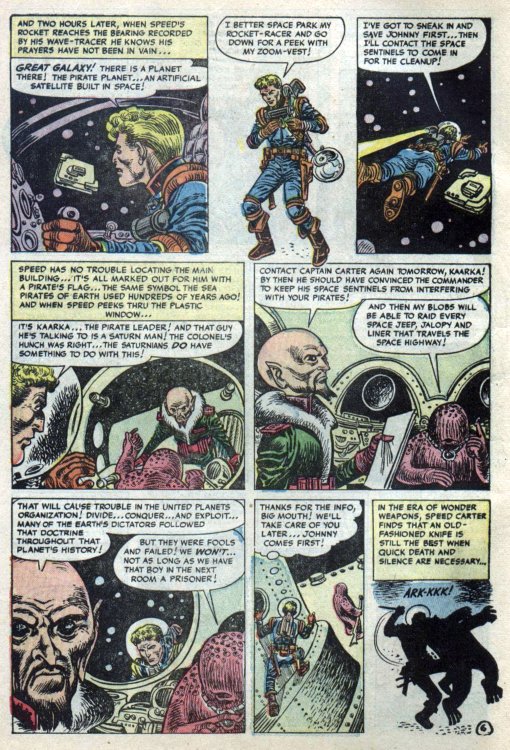 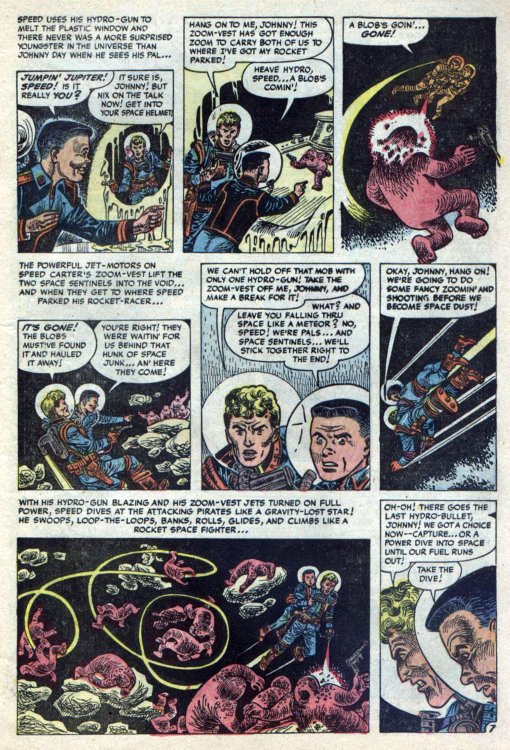 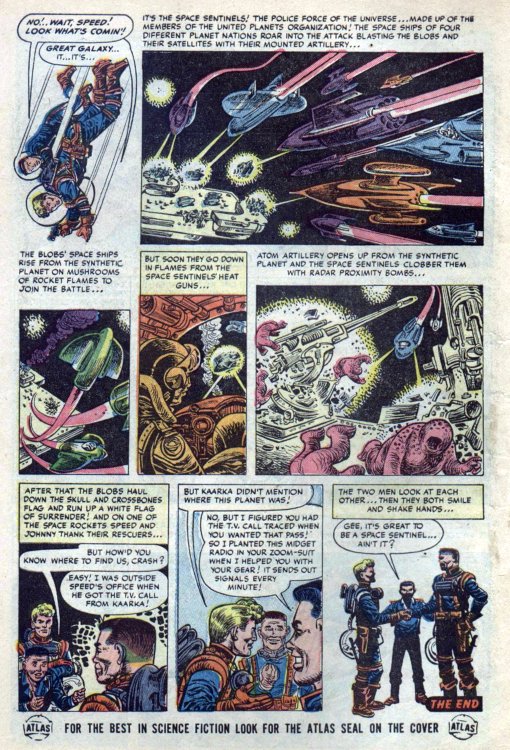 Written by Hank Chapman, illustrated by Joe Maneely.
Maneely was Stan Lee's go-to artist during the early 1950s with the ability to handle any and every genre with equal speed and versatility.
Unfortunately, he was killed in a commuter train accident in mid-1958 at the age of 32.
Had he lived, Joe would probably have been one of the creative mainstays, along with Jack Kirby, Steve Ditko, and Don Heck in Marvel Comics' ascendancy in the Silver Age.

Speed Carter: Spaceman was Atlas Comics second try at an ongoing space opera series when a short-lived Space Squadron comic bit the dust after six issues.
Speed fared no better, logging a half-dozen editions before disappearing into the infinite, but we'll be presenting his never-reprinted tales right here!

As we pointed out on Friday... 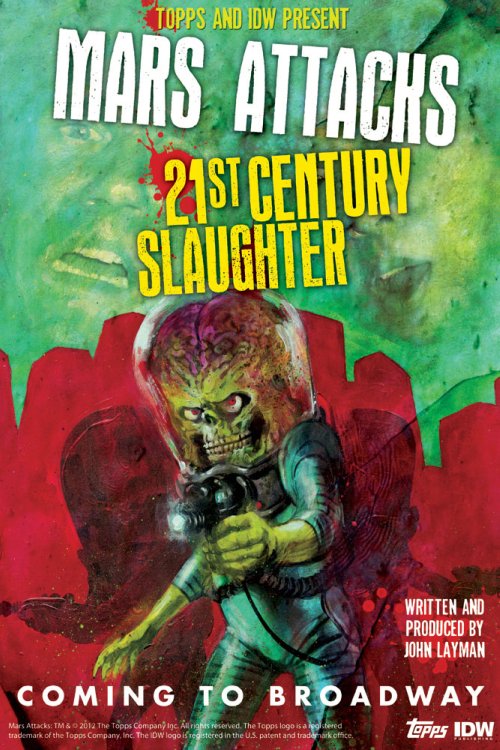 ...there is NO Mars Attacks Broadway show in the works!
Bleeding Cool has posted an article HERE, restating the points we mentioned HERE!
Having worked on Broadway (Patrick Stewart's A Christmas Carol,  Kreskin, and several others) and on Mars Attacks, both the 1990s comic and the movie), I had a gut feeling that this was just a joke.
A little bit of research (without even having to call anybody at Topps or Broadway producers I had worked with) confirmed what I thought.
The fact that most of the comics "journalists" (such as Comic Book Resources HERE) fell for such an obvious prank, reporting it as actual news, is a sad commentary on the intelligence of those so-called "reporters".
Support Small Business
(and a person with a functioning brain!)
Visit Our...