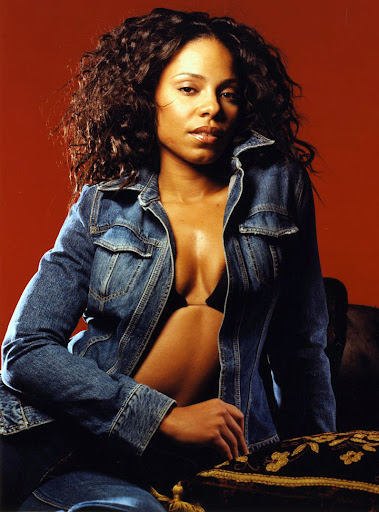 Considering she started her career with a featured role in Blade and has done top-notch work in several genre flicks and TV shows since, it's unforgivable that I haven't taken a long...lingering...look at the lovely Sanaa McCoy Lathan before now.
The multi-talented Sanna is equally at home on the Broadway stage (a Tony Award-nominated performance in a revival of Raisin in the Sun

), an animation voice-recording studio, or doing a lot of her own stunts on camera.

(Vanessa Brooks)
Out of Time 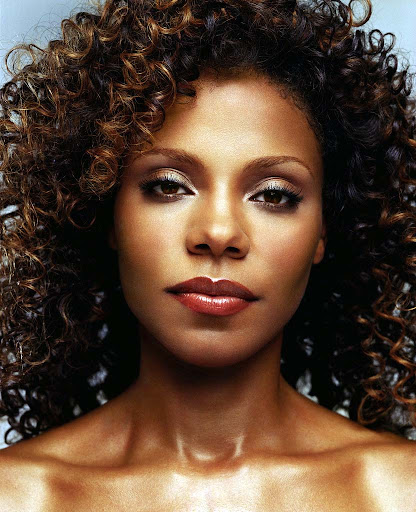 A Twilight Zone-style story from Race for the Moon #1, illustrated by Bob Powell! 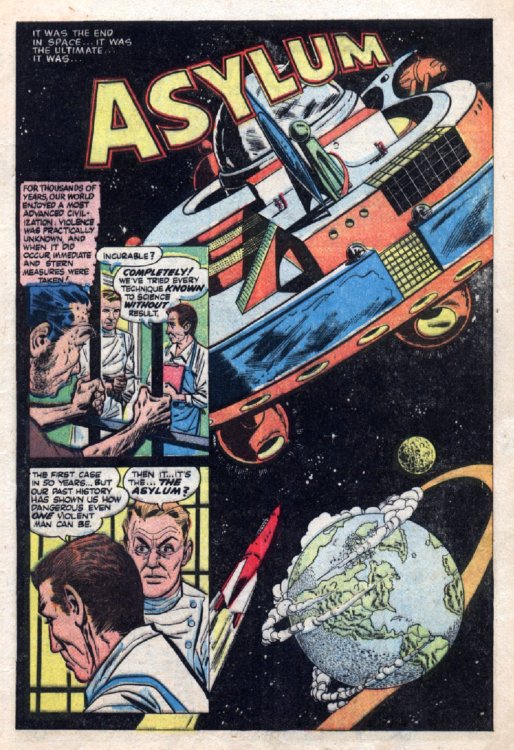 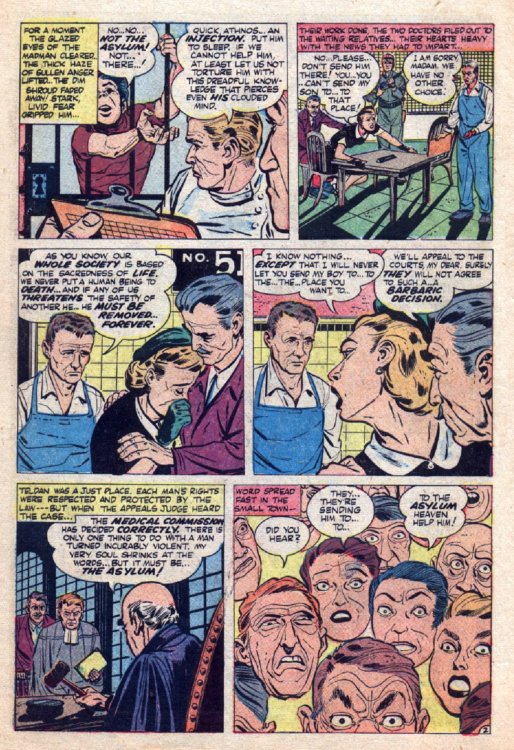 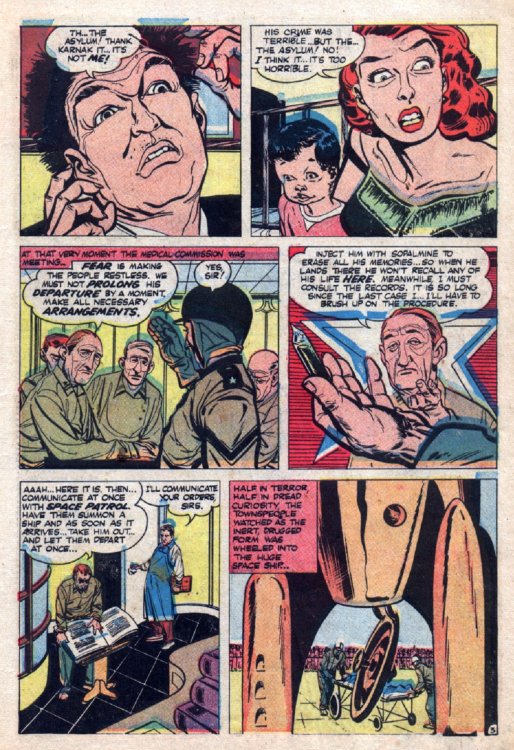 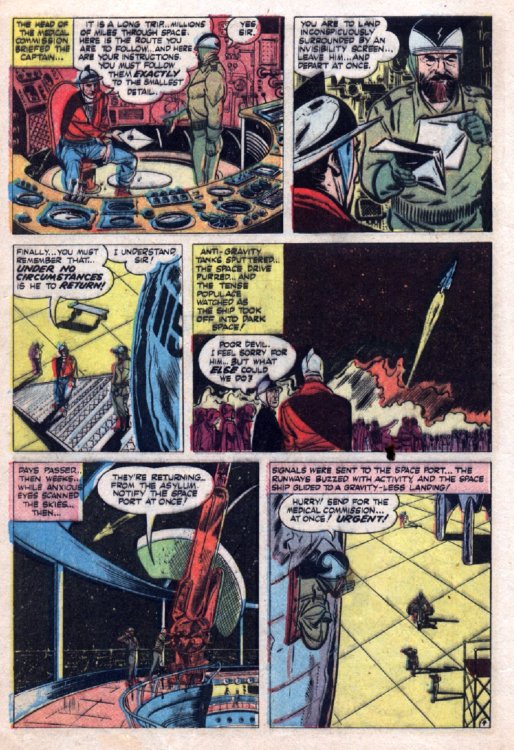 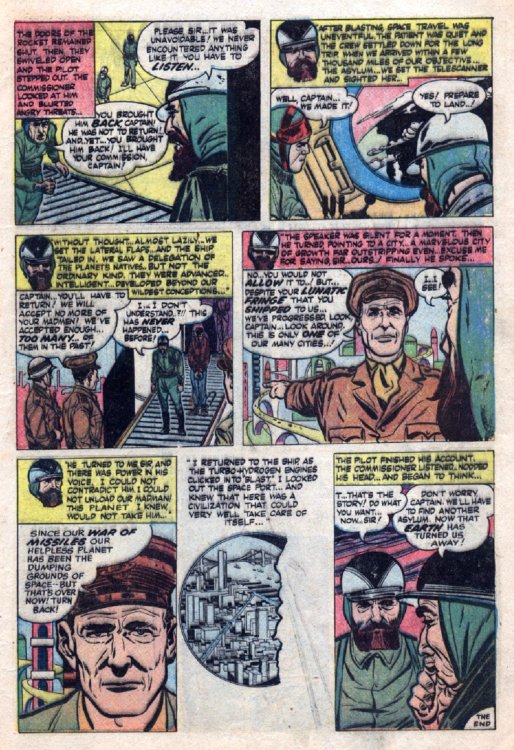 Between the whole budget brohaha in Washington and listening to the idiots at the Iowa State Fair ("Corporations are people!"--Mitt Romney), perhaps we should rename our planet from "Earth" to "Asylum"!

The Human Torch..."I got better" 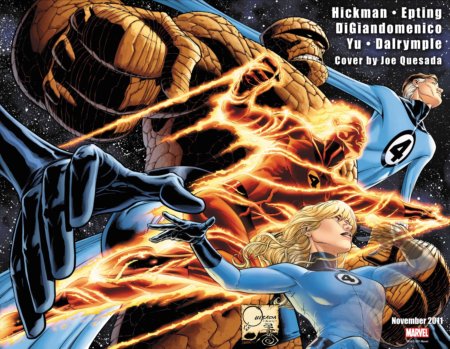 YouTube Wednesday: VOYAGE TO THE BOTTOM OF THE SEA: the Movie 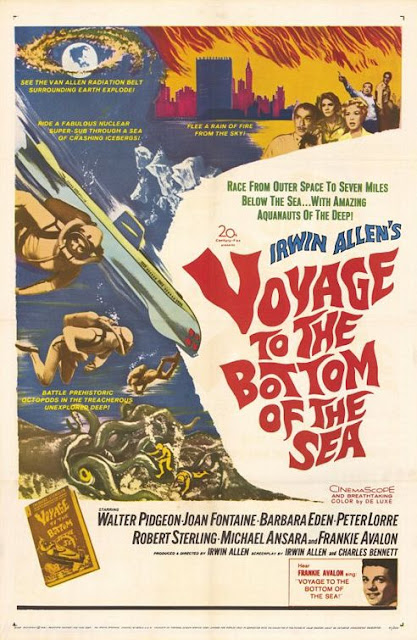 Over at our brother blog, Secret Sanctum of Captain Video™, we're presenting the never-reprinted comic book adaptation of Voyage to the Bottom of the Sea: the Movie, which the tv series spun-off from!

To entice you, here's the trailer from the feature film...

and here's a promo from the tv series...

Oddly, there's LOADS of Voyage stuff on YouTube, but most of it is not embeddable!
Irritating!

Email ThisBlogThis!Share to TwitterShare to FacebookShare to Pinterest
Labels: blog, comic books, movies, tv, Voyage to the Bottom of the Sea

Is Miles Morales the (Ultimate) Spider-MAN?

There's been a lot of controversy about the new Ultimate Spider-Man.
The sometimes-heated discussions about his ethnicity have been rather...revealing.
But, perhaps the most important question has been all but ignored...
Is Miles too young to be Spider-Man?
Look at this page...
He's apparently 12-14, and short for his age.
Now, Peter Parker was a high-school junior/senior, average height, but thin. 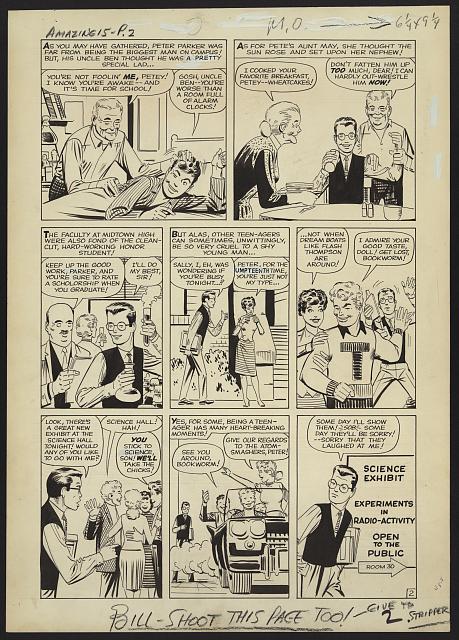 So 17-18 isn't unreasonable.
Even in disguise, he's not that imposing a figure, but obviously a young adult... 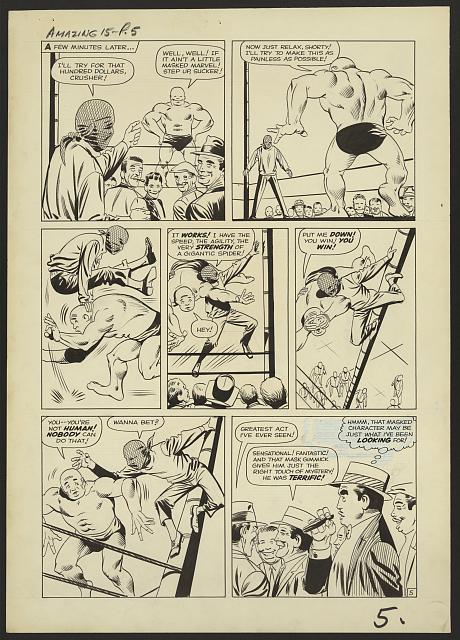 Even in costume, he looks almost as frail as the elderly security guard... 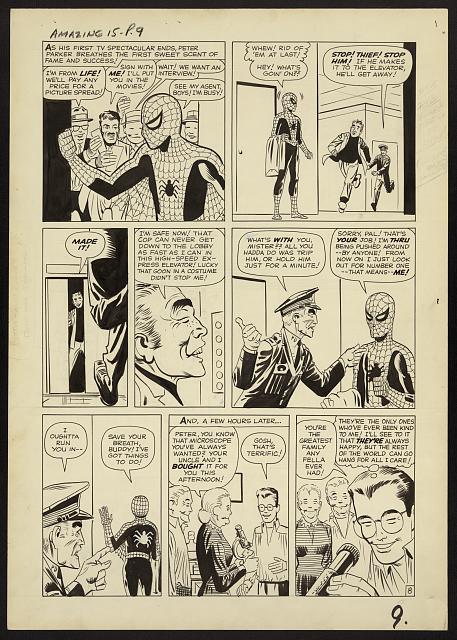 In the first year, before Ditko was told to "bulk him up", a number of foes would intitially snicker and make derisive comments about the "skinny twerp in the spider costume".
Then Spidey would kick their butts.
After Ditko left, Spidey's look became more muscular until he was on a par with most other acrobatic heroes like Daredevil or Black Panther.

How is a 12-14 year-old (even spider-enhanced) possibly going to look like anything but a kid in a Halloween costume when going toe-to-toe with characters who look like Schwarzenegger in a funhouse mirror?

When Last We Left Our Hero... 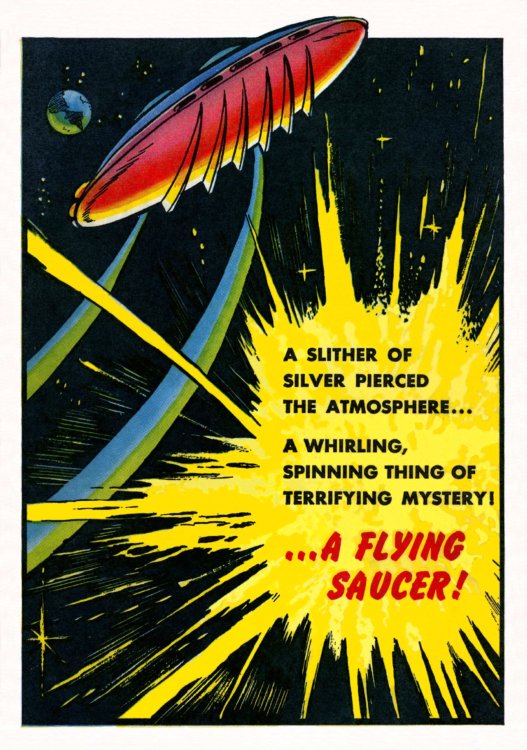 Ace test pilot Victor Torry and his aviation-enthusiast girlfriend Laura are testing a new jet when they encounter a flying saucer!
They pursue it and, when it lands in the desert, they also land, then go aboard the alien ship where they meet an elderly alien.
Unable to return to Mercury (his home world) in time to regenerate, he bequeaths the spacecraft to Vic and Laura, then disintegrates.
Exploring the ship, they accidentally activate the propulsion system and the ship, operating on automatic pilot returns to Mercury, with them aboard.
It lands, and a group of Mercurians greet the ship.
They are not pleased to see Earthlings instead of one of their own exiting the ship... 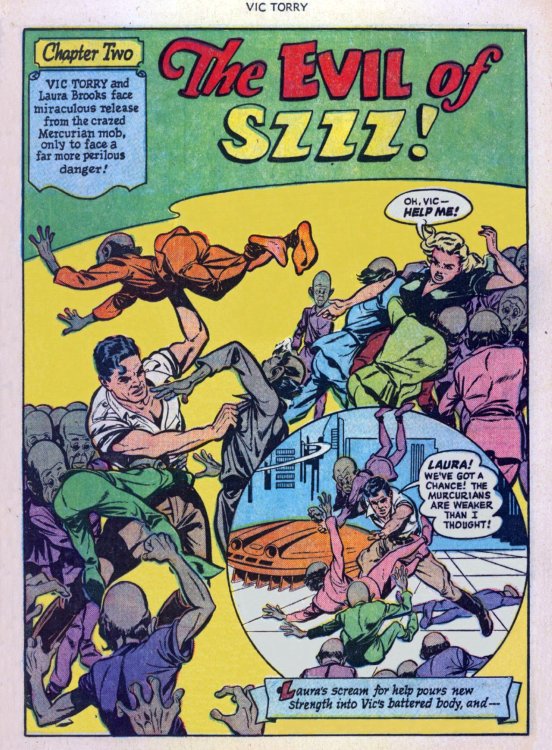 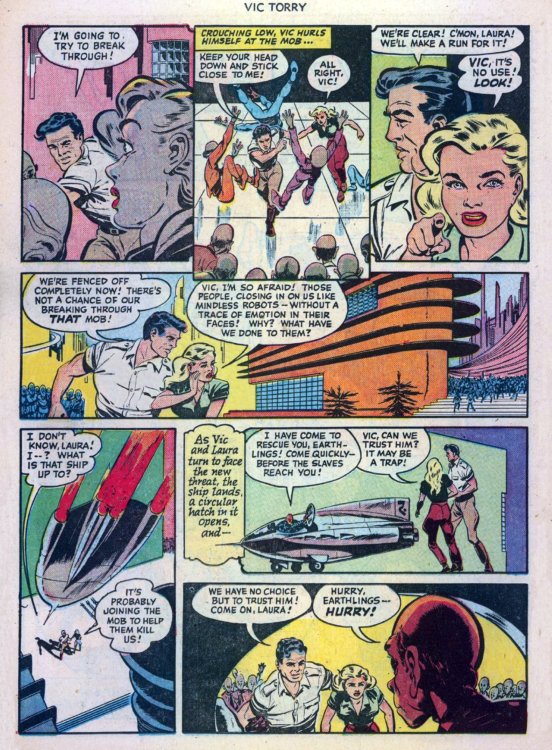 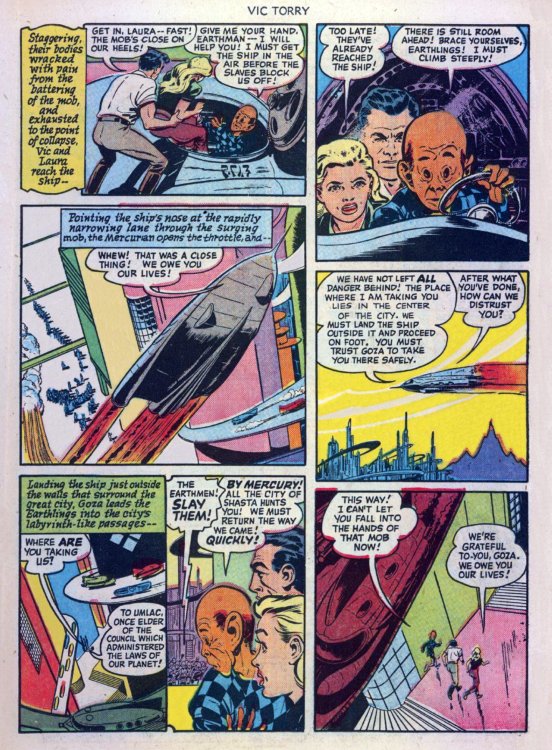 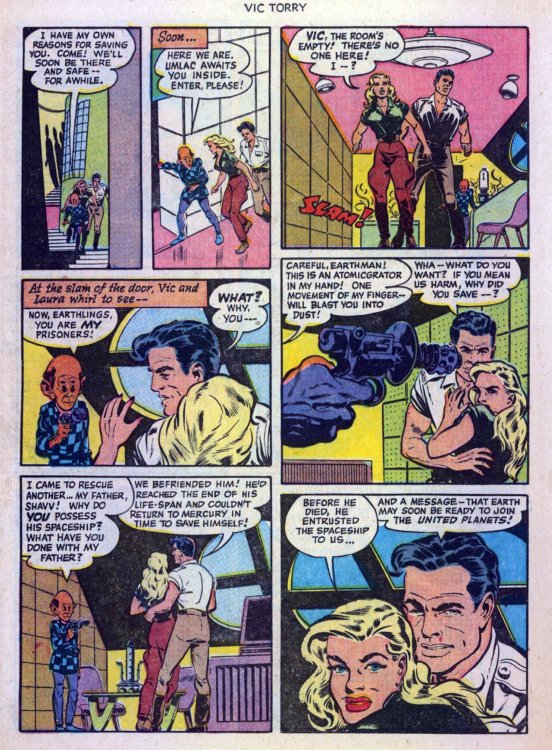 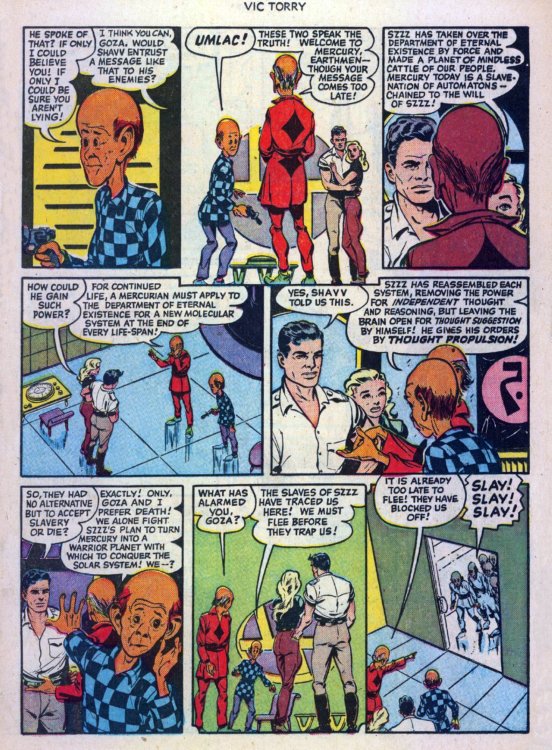 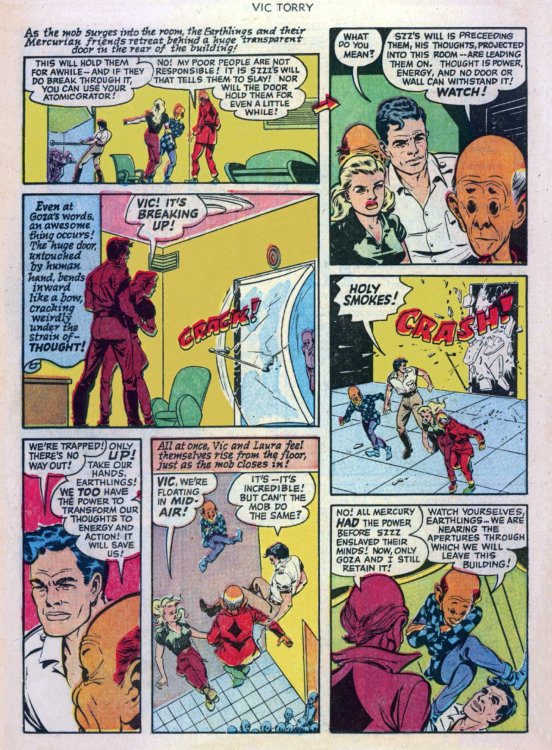 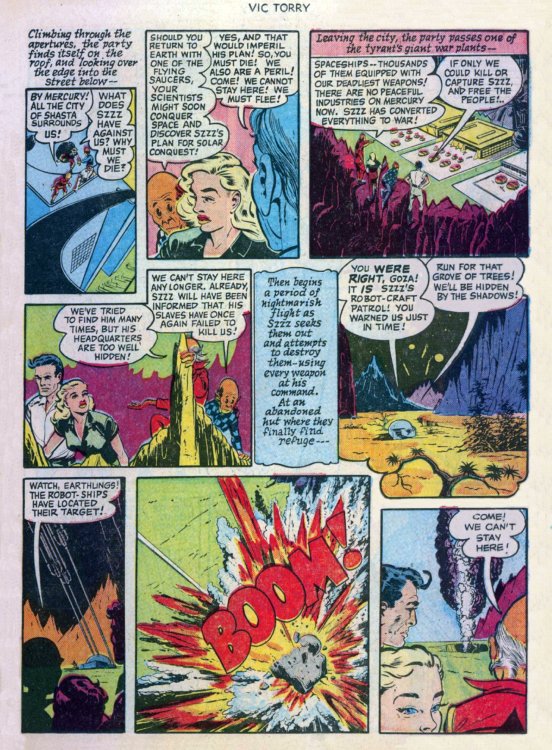 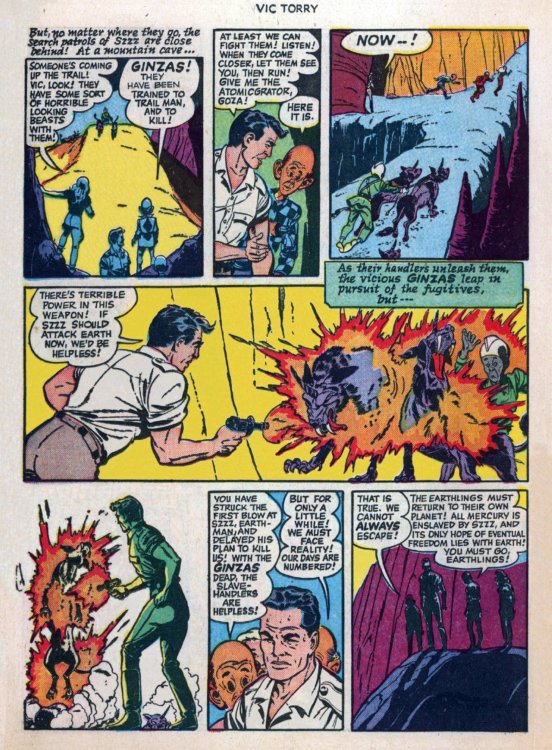 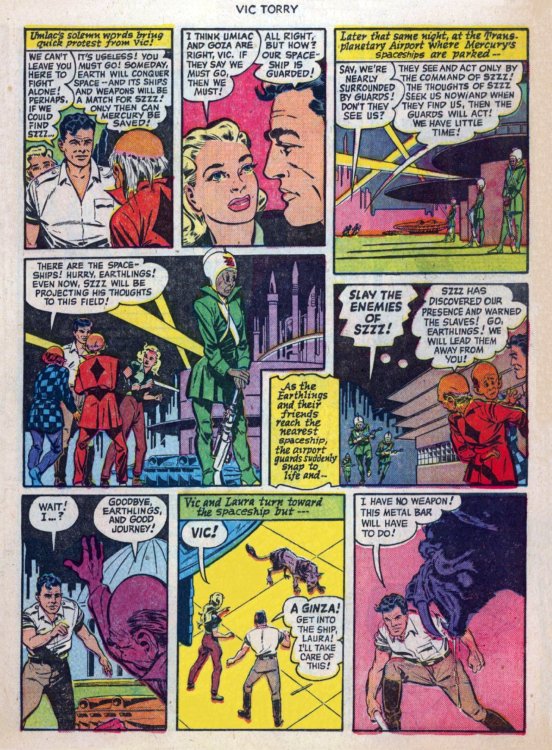 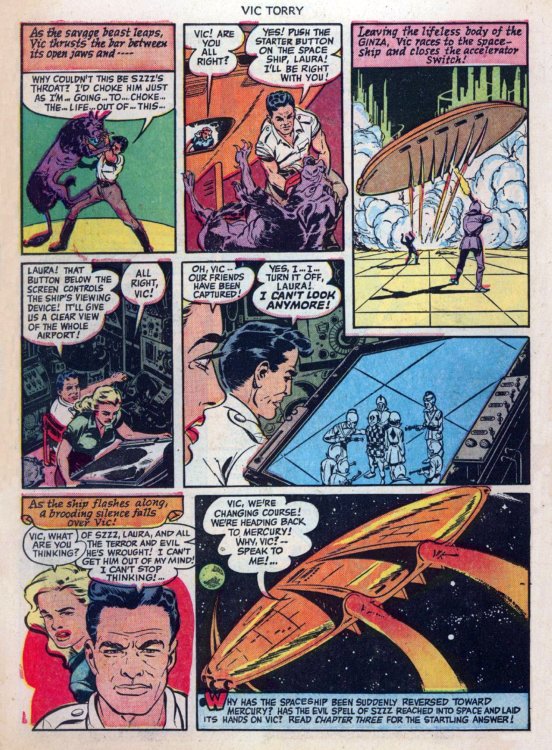 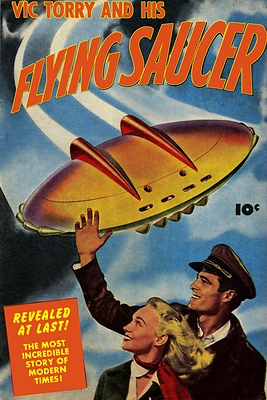 Whether doing Western, Film Noir, or Space Opera-themed art, Francesco Francavilla consistently astounds and amazes with his ability to capture the "essence" of the subject!
For proof, just look up!
And he's one of those rare combination penciler/inker/colorists! (Do you realize how few of them there are?)


Check out the Barsoomian artifacts at the