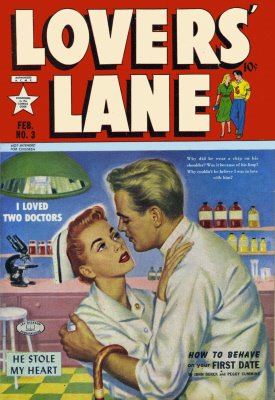 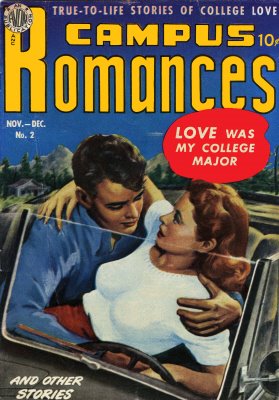 With than in mind, Valentine's Day is coming!
And what says "True Love" better than a kool, kitchy gift from TRUE LOVE COMICS TALES™? (Plus, it's both longer-lasting AND cheaper than a dozen roses!)

Choose from over 50 heart-rending designs in nine categories including...

All You Need is Love...
Confessions
Dear Beatrice Fairfax
(The ORIGINAL LonelyHearts Columnist)
Diaries and Letters
Lovers Lane
School of Love
(or is that Love in School?)
WarTime Love
Weddings
Western Love
...on greeting cards, teddy bears, calendars, shirts/tops/intimate wear, diaries, and many other kool kollectibles!

PLUS: FREE SHIPPING for orders totalling $40 or more Jan 30th-Feb 3rd! Just use Coupon Code CUPID when checking out!
*Free Economy or Standard shipping for orders of $40 or more, excluding shipping charges, gift wrap charges and applicable sales tax. Delivery address must be within the United States and cannot be a PO Box. All orders will be Economy shipping unless the order is not eligible for Economy shipping (e.g., order exceeds Economy weight restrictions). Coupon code CUPID must be entered at check out. Promotion starts on January 30, 2011 at 12:01 a.m. (PST) and ends on February 3, 2011 at 11:59 p.m. (PST). Offer cannot be combined with any other coupons or promotions and may change, be modified or cancelled at anytime without notice. This promotion cannot be applied to past orders.
A public service announcement for all lovers and would-be lovers from your BFFs at Atomic Kommie Comics™

On Valentine's Day, tell him (or her) "Giddyap, Sweetie!" 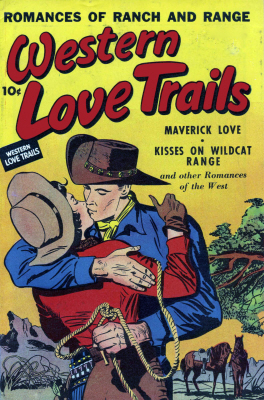 Valentine's Day is almost upon us, and nothing says "I Love You" like gunpowder, horse blankets, and guys who don't bathe for days, right?
Right?
Someone thought so back in the 1950s, when two of the most popular genres--romances and Westerns were combined into Western romances (or Romantic Westerns) in both prose fiction and comics.
True Love Comics Tales™ has digitally-restored and remastered the best of the comic cover art from that all-too-brief shining period of American literature for a new line of Valentine's Day goodies including greeting cards, diaries, teddy bears, even shirts, tops, and, well...bottoms for men & women at Western Love™
Just the thing for the cowboy or cowgirl in your life! 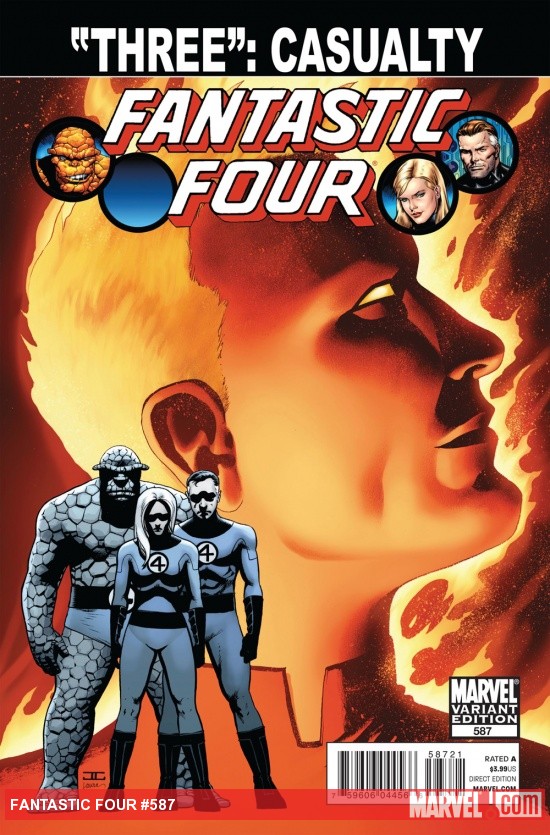 A quick search on the Net shows this variant cover edition of Fantastic Four #587,  the "Death of the Human Torch" already going for $50-$80!

Amazing how people are trying to capitalize on the death of a beloved comic character.

BTW, I'll be wearing this to the memorial ceremony... 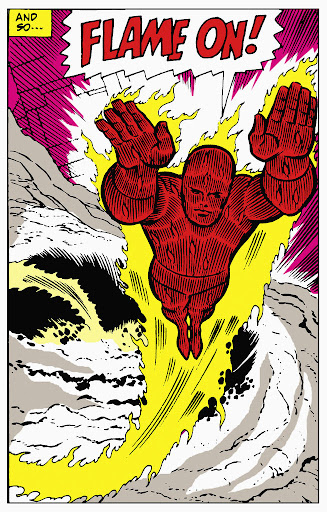 With the death of Johnny Storm aka The Human Torch II, let's take a look at several of his various media incarnations...
He first appeared in the 1960s Hanna-Barbera cartoon...

BTW: the voice of Galactus is Ted Cassidy (Lurch from the The Addams Family

tv series.) and The Silver Surfer is Vic Perrin (the Control Voice/narrator of the original Outer Limits


He also "appearared" on several lp albums including Golden Records "Amazing Spider-Man #1", "Fantastic Four #1" (Note: the most bizarre thing about these records is all the sound effects in the story were actually spoken with an echo effect.
So, when the cosmic rays hit the spacecraft, you hear an actor saying "RAK-TAK-TAK!"), 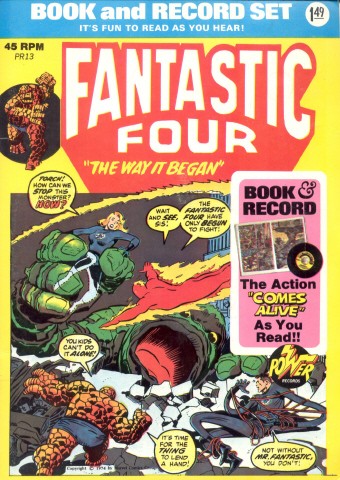 His next "appearance" was audio-only when Bill Murray (SNL, GhostBusters, Groundhog Day, etc.) portrayed him on a 1975 13-episode radio series modeled after the dramatic shows of the 1930s-50s!

Fantastic Four: "Menace of the Mole Man" radio show mp3
or if you want "visuals" with your radio show...

Johnny did not appear in the 1978 FF animated series

, replaced by Herbie the Robot (The Jar Jar Binks of FF history)..
BTW, Johnny was replaced because The Human Torch was optioned for a live-action tv pilot which never got beyond Development Hell, not because the network thought kids would immolate themselves imitating him!
And finally, the trailer for the low-budget 1994 Roger Corman movie version starring Jay Underwood as Johnny! (The music is from Battle Beyond the Stars

!)
BONUS: the ONE scene of Johnny in action as the Human Torch!


Interestingly, his animated form seems based on the Fleisher Brothers Superman from "The Mad Scientist" (the first cartoon)!
Posted by Britt Reid at 1/26/2011 09:52:00 AM No comments: 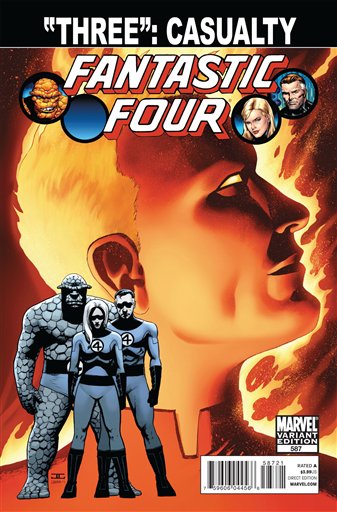 NEW YORK (AP) — It's a Fantastic Four farewell with the revelation Tuesday of who among them has been selected to be written out of the super hero team.
While Marvel Entertainment has made no secret that a member of the quartet, which was introduced in August 1961, would die, exactly who among the group would fall has been a closely held secret, until the release of issue No. 587.
It's the Human Torch, leaving teammates Mr. Fantastic, Invisible Woman and the Thing to pick up the pieces and move forward.
Fifty years after cosmic rays transformed him into a man ablaze, the Human Torch will burn no more as the pop culture purveyor of super heroes and villains embarks on an ambitious story line that ends the Fantastic Four.
In the newest issue of one of the company's longest-running comic books, Johnny Storm's life is taken amid a massive battle that writer Jonathan Hickman has been scripting for a year-and-half. Illustrator Steve Epting did the art.
Hickman, along with his editor, Tom Brevoort, have been unsurprisingly mum on what the future may hold for the characters, but one thing is certain, the end is nigh for the Fantastic Four next month.
Brevoort, senior vice president for publishing at Marvel told The Associated Press that "588 is the final issue of the Fantastic Four. Beyond that, we're not ready to say exactly what we're doing. There won't be an issue 589."
All he would say about the future was that the various subplots and threads that Hickman has written "will converge in a new thing that will be exciting and different and yet, very familiar and very much the same."
Hickman told the AP that the death is part of the natural evolution of his ongoing story line.
"In doing this, we're going to elevate the other three and the family in general and going forward with the story that we want to tell," he said. "I think it makes complete sense. It's kind of a logical move."
Readers have weighed in online, on Twitter and in comic shops about the buildup to the new issue, debating about who should die and who should live.
"Our readers get heavily involved in the lives of these characters. They fight alongside them, they share their triumphs and pitfalls," he said. "They live with them and they grasp them very tightly to their breast. They take them on in a very one to one, very personal sort of way."
But is death really the end and, more so, will it be permanent? After all, death has previously visited the Fantastic Four, which was created by Stan Lee and Jack Kirby.
Sue Storm, the Invisible Woman, supposedly died, but that was just a ruse. Similarly, her husband, Reed Richards, aka Mr. Fantastic, was thought dead after being caught in a blast with his archenemy, Dr. Doom. Instead of death, however, Richards and his nemesis were snatched away to another dimension.
Indeed, death is not uncommon in comic books. DC killed Superman in the 1990s, only to bring him back. At Marvel, Captain America was assassinated on the steps of a court house and returned, while Marvel's mutant band of X-Men know death so well that the Grim Reaper is on speed dial — Thunderbird, Phoenix, Nightcrawler and others have been felled.
Roy Thomas, who was a writer and assistant editor at Marvel in the 1960s and, later, its editor-in-chief from 1972-1974, said that since comics try to mirror real life, death is always a specter.
"The thing that is the most unrealistic is that so few people (have) died, good, bad or otherwise," he said. "If they did, they always managed to come back."
Thomas said he hated to see a member of the Fantastic Four die, but the Human Torch may not be gone forever.
"Whether it's Superman, the Thing or Bucky, if someone wants to bring them back to life later, you can't bury them deep enough or tear them into enough pieces" to keep that from happening. "Death is not a permanent condition in the comic book universe."
Joe Quesada, Marvel's chief creative officer, recognized that death, while potent, is not necessarily lasting and that the death of a character in comics has turned out "to be very cliche" in plot developments.
"Whether the human torch comes back or not is really a question that will be answered in time," he said.
"While I will never discount that a character can come back from the dead because it is one of the staples of comic book story telling . I'm not going to tell you if he will, or when he will and if he does, how he will, but I can assure you that it's going to be very, very interesting and not what anyone expects."

I'll be wearing this to the memorial ceremony...

Press Release...
New York, NY (January 24, 2011) – Gareb Shamus, recently appointed President and CEO of public company Wizard World, Inc. (“Wizard World”) (OTC: GOEE.PK), today announced that the Comic Con Tour, which consists of pop culture conference events that provide high visibility marketing opportunities to pop culture brands and companies in multiple venues throughout the year, is now being produced by public company Wizard World. The Wizard World Comic Con Tour intends to cover 12 cities in 2011, including major cities such as New York City, Boston, Chicago, Philadelphia, Austin and New Orleans. The Tour will include sponsors ranging from major movie studios and TV networks to gaming and toy companies to content publishers.
In addition, Wizard World plans to launch in February 2011 an all-new digital magazine called ‘Wizard World’ that will appeal to pop-culture fans, the same audience to which Mr. Shamus has catered to, for over 20 years. Wizard World digital magazine will provide coverage of the world of comic books, toys and superheroes, and the personalities behind them.
“This is a very exciting day for Wizard World and the industries it serves,” said Shamus. “Having the Tour produced by a public company provides additional opportunities to expand and grow the Tour. The new digital magazine Wizard World will give consumers the content they want in a magazine format with which they are familiar, but distributed in a form that is always available at any time on any device. It is a natural evolution for us in this market.”

You'll note there's no mention of the cancellation of the magazine itself, as well as the fates of the employees!
That's covered at Robot 6. and Bleeding Cool with both news and commentary.
UPDATE: ToyFare was also cancelled, and all staff laid off.
Posted by Britt Reid at 1/24/2011 01:44:00 PM No comments: We at Atomic Kommie Comics™ know that the path of love is not always smooth, especially in wartime.
In tribute to the brave men and women of the armed forces, we've created a new section of True Love Comics Tales™ about military-based love comic books entitled WarTime Love™ just in time for Valentine's Day featuring greeting cards, teddy bears, clothing and a host of other goodies with vintage retro romance comic cover art.
Show your beloved, be they an officer, noncom, or GI Joe (or GI Jane) that you're thinking of them on Valentine's Day.
Atomic Kommie Comics™