Design of the Week--AIEEE! WereWolf! 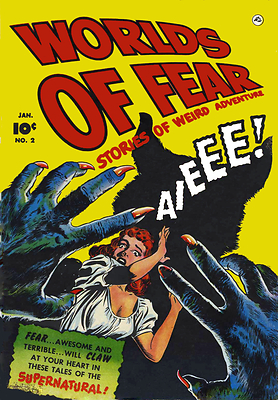 Each week, we post a limited-edition design, to be sold for exactly 7 days, then replaced with another!
This week...
We're continuing our roll-out of horror comics-themed goodies with this vintage 1950s horror comic cover from the new Werewolves 2011 12-Month Calendar that'll be on assorted collectibles like mugs, t-shirts, iPad/Kindle/messenger bags and the like for only 7 days! After that, it's back to the tomb, only to be seen on the calendar!
Combine it with one of the demonically-delightful books or DVDs below for a kool-ghoul gift set for birthday or holiday

A one-day offer! Beginning 12:01am, Nov. 12 and ending at 12:01am, Nov. 13th...
Atomic Kommie Comics™ Entire line of 2011 12-Month Calendars
normally $19.95, reduced to ONLY $14.99!
Save $5 on EACH!
Created using the wildest, rarest, kitchiest comic book, pulp magazine covers and movie posters we could find, each image digitally-restored and remastered from hi-rez scans of the original items, NO reprints or low-rez files! (Would we do that to you?)

Here are the
Atomic Kommie Comics™ 2011 12-Month Calendars
by genre
(Note: Most are revised versions of previous calendars.
TOTALLY NEW ones are indicated as such)

Captain MidNight™
(shown above)
Aviators of the Golden Age of Comics™
NOT available in stores, only on-line! Order now...before time runs out! ;-)
Design of the Week will appear on Saturday.
Posted by Britt Reid at 11/12/2010 12:38:00 AM No comments:

A sincere Thank You, men and women of our Armed Forces past and present, for your dedication and sacrifice.
Posted by Britt Reid at 11/11/2010 11:30:00 AM No comments:

YouTube Wednesday: THE GREEN HORNET "The Hunters and the Hunted" 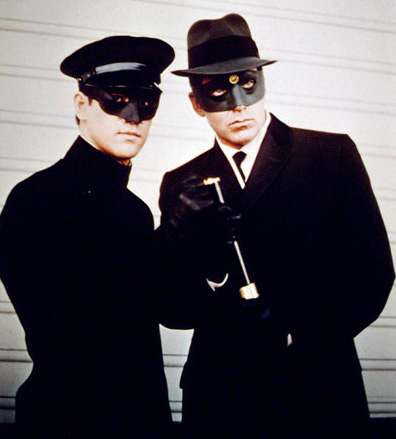 The opening narration to the Hornet's radio show was "The Green Hornet; he hunts the biggest of all game..."
In this tv episode, the tables are turned.
Wealthy (and crooked) businessman Quentin Crane and his fellow members of the exclusive Explorers' Club use exotic weaponry (like blowguns and crossbows) to hunt and kill gang leaders. Ironically, the other members are well-intentioned innocents who believe their "hunts" will end crime in the city, while Crane is using them to eliminate competition as he takes over, one gang at a time!
And...the group's next targets are...The Green Hornet and his masked associate!
SideNotes:
When Crane's gangsters break into Reid's home intending to kill him, Kato (with Reid's aid) take them down. It's the second time we see Kato in action sans costume, and the first time in the series we see an unmasked Reid in a fight.
Speaking of which, I wonder what do Reid's neighbors think of the constant hubub at the young publisher's townhouse? If it's not a robbery where a police car gets blown up by a laser beam ("The Ray is for Killing"), or gunshots ("Beautiful Dreamer"), this episode features the first of several brawls. Not to mention the sinister black car constantly prowling the alleys at all hours... Those neighborhood association meetings must have been interesting! (At least the tv Batman's oft-invaded stately Wayne Manor was out in the country. No neighbors to disturb!)

Another thing, the criminals who raid Reid's house are the same baddies he and Kato KOed (while in costume) at a gang-leader's office earlier in the episode. We don't see them again. Rather than let the twice-trashed hoods put 2+2 together ("That little guy who helped Reid fights like the Hornet's driver...Hey wait a sec..."), I wonder if Britt and Kato discreetly "disposed" of them?
There's a LOT of day-for-night scenes here. Depending on the quality of the episode's print, I've seen it almost as bright as day, to barely able to make out silhouettes.
Here's the 11th filmed and aired episode..."The Hunters and the Hunted"

Tense cover by Francesco Francavilla for #8 of the companion comic mini-series to Green Hornet: Year One

.Of all the Green Hornet series from Dynamite, these two are easily the best! 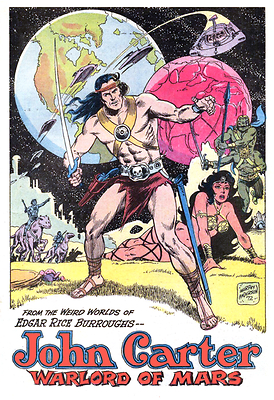 He's almost 100 year old, but not only is he the basis for a new big-budget sci-fi / fantasy film, his multi-volume high-adventure saga is the inspiration for almost every major space opera in print or on-screen since his debut in 1911*!
He's John Carter!
The first pulp adventure series created by Edgar Rice Burroughs

by several months). the six-part serial "Under the Moons of Mars"

detailed how soldier-of-fortune John Carter, mortally-wounded by Indians while prospecting for gold in 1870s Arizona, somehow projects his consciousness to Mars, where it is reincarnated in a body identical to his Earthbound form.
(Burroughs suggests that Carter is immortal. In the opening pages of "Under the Moons of Mars", the author reveals that Carter can't remember his childhood, having always been a man of about thirty years old. Generations referred to him as "Uncle Jack," but he always lived to see all the members of the families grow old and die, while he remained young.)
In Mars' lesser gravity, Carter's normal-human strength is, literally, superhuman!
He can lift over a ton, and can leap over a quarter of a mile!
And, yes, he can breathe, because the Barsoomians operate atmosphere-generating facilities bringing the oxygen content of the air to near-Earth levels.
He rescues and falls in love with the beautiful princess of the city/state Helium, Dejah Thoris, and joins with her in battling tyrannical enemies in a world filled with hidden cities, exotic creatures, and advanced technology (sometimes disguised as "magic").
It's the prototypical "high adventure" series, and it's concepts and tropes can be found in most later sf/fantasy from Flash Gordon

Probably because of heavy special-effects requirements, there were no film or tv adaptations of John Carter stories until 2009, when a direct-to-video version of A Princess of Mars

was released.
(Legendary animator Bob Clampett attempted to produce an animated version in 1936, going so far as to produce an illustrated bible and test footage. But no studio wanted to bankroll the project, believing "realistic" animation wouldn't sell. Several years later, the Fleischer Studio

, proving them wrong.)
Now, production is under way on a cgi-enhanced feature film (like Avatar

, and Sky Captain) called John Carter of Mars based on the first novel, A Princess of Mars, with noted author Michael Chabon

With public interest in these interplanetary adventures ramping up, Atomic Kommie Comics™ feels it's the right time to re-present some of the best art of past versions of Barsoom and John Carter and offer our fans the chance to go Secret Chic with classic Carter collectibles in our Martians! Martians! Martians!™ collection including mugs, t-shirts, and an Art of Barsoom 2011 12-Month Calendar!
With Christmas coming, any of our collectibles combined with one of the books or dvd below as a gift set would make a great lead-in/intro to a pop-culture/high adventure fan to prep them for the new movie due next year!

*Though The All-Story magazine the first chapter of "Under the Moons of Mars" appeared in is cover-dated February, 1912, the magazine was actually on sale in November-December 1911.
Cover-dating fiction magazines (including pulps and comic books) 3-4 months ahead of the actual release date was standard practice until the 1990s. 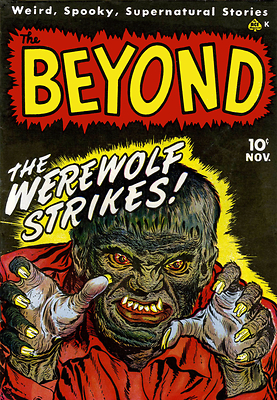 Due to popular demand, we're expanding our Horror Comics of the 1950s™ department to include entire new sections devoted to specific types of monsters!

WEREWOLVES!
The very personification of uncontroled release of murderous, mindless, animal lusts!
Before the 2000s, that's how those who changed when the moon is full were portrayed

by performers from Lon Chaney

.
Interestingly, enough, a number of novels and short stories portray human women who can control the desires of lycanthropic men and make the transformed males obey them. Few, if any of those tales have been adapted for the screen. 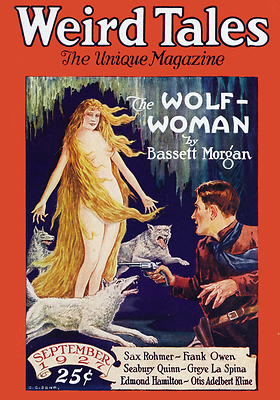 Today, werewolves are as hot a romantic icon as vampires, with whom they're usually presented in conflict with over human females, in movies and TV series like True Blood

series!
For those who prefer lycanthropes who don't bare their chests unless they've gone furry, or Team Edward members who want to rib their Team Jacob counterparts with gag gifts, we've resurrected the classic image of the furry fiends on a line of collectibles including mugs, magnets, t-shirts, iPad/Kindle/messenger bags and other undead tchochkies! 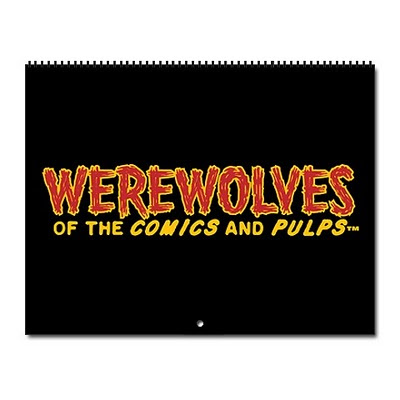 Plus, a Werewolves! 2011 12-Month Calendar!
If you're looking for a birthday or holiday present for a fan of the life-impaired (or a treat for yourself), why not combine one of our kool kollectibles with one of the books or DVDs below for the ultimate ghoulish gift set?