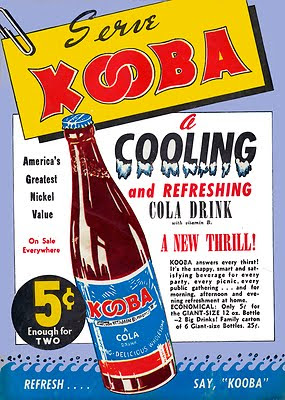 Wait a second...You CAN'T!
It doesn't exist!
(You can read the sordid tale of the soda that almost took the world by storm here!) 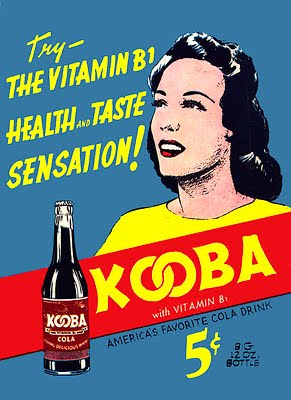 Now, you can't DRINK it, but you can WEAR it!
We at Atomic Kommie Comics™ decided to re-present the Soda That Would Not Die on collectibles ranging from Beachwear or DormWear to mugs, iPad / netbook / messenger bags (and the irony of doing bags with "Kooba" on them hasn't escaped us!) and hoodies at KoobaCola 1 and KoobaCola 2!
And for you back-to-school shoppers, the shirts make great dormwear or nightshirts (if you're still living at home)!
So celebrate what could have been one of the bubbliest success stories of soft drink entepreneurship, but instead just fizzled out and fell flat!
(You just knew we were gonna do a pun like that, didn't you?)  ;-)
Posted by Britt Reid at 8/07/2010 05:13:00 PM 1 comment:

Design of the Week--Captain 3-D 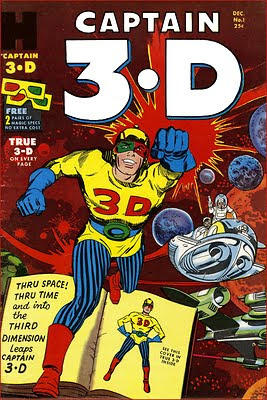 Each week, we post a limited-edition design, to be sold for exactly 7 days, then replaced with another!
This week...the return of the first superhero created specifically for 3-D...Captain 3-D! 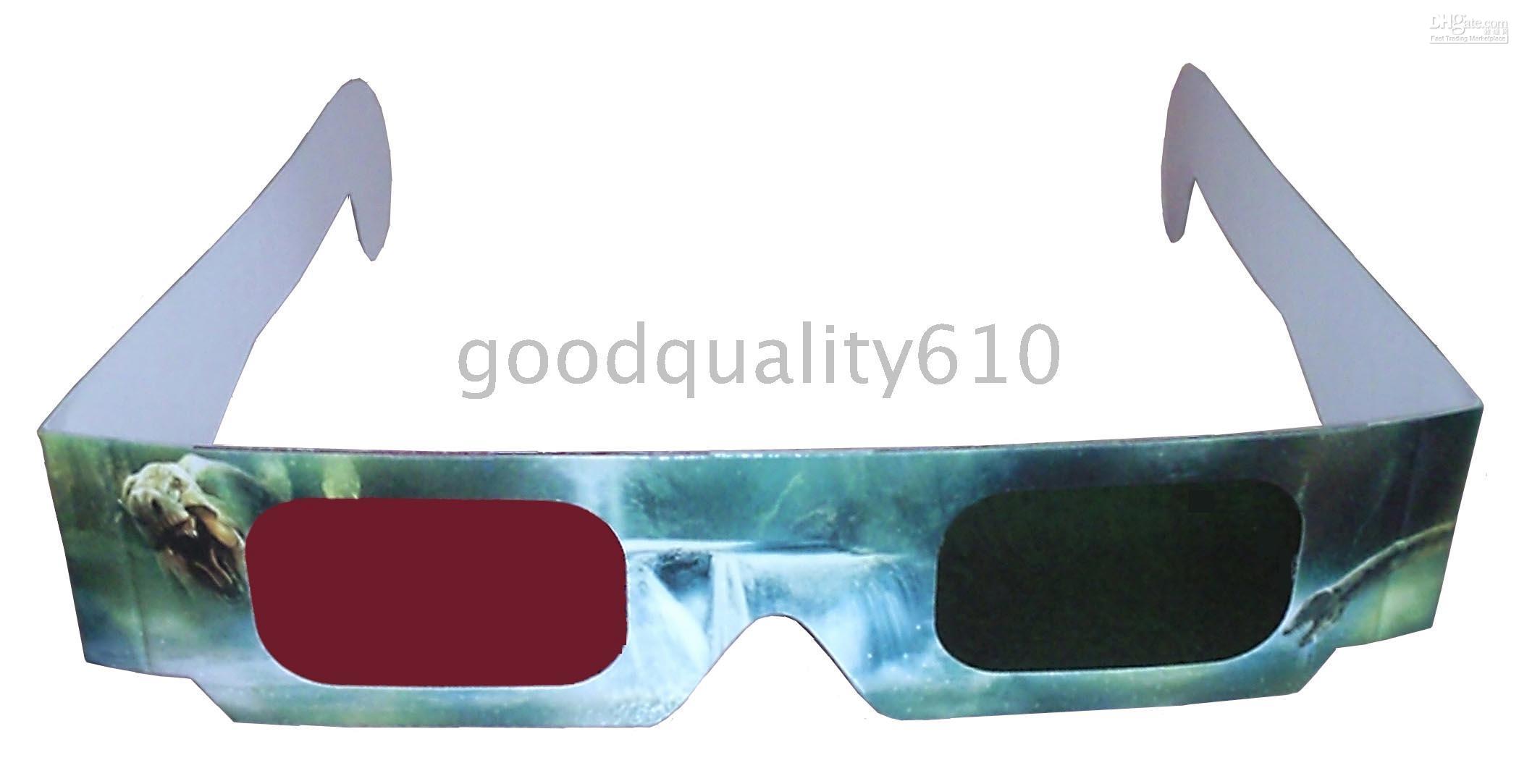 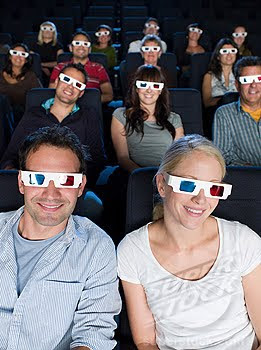 We at Atomic Kommie Comics™ feel the character deserves better than that, so we restored him (or at least his cover) to our Design of the Week line to test his viability.
If he sells well, we'll find him a permanent place in our lineup. If he doesn't, he's gone after next Friday!
You decide if he "lives" or "dies"! Vote now...
Posted by Britt Reid at 8/06/2010 01:51:00 PM No comments:

Where did Out of Print go?
A very kool, self-aware, strip about the plethora of Public Domain characters currently enjoying a resurgence of interest, with lots of inside jokes by people who knew their subject matter.
It was up a couple of weeks ago. Now, suddenly...gone!
Anybody know what's up?
Posted by Britt Reid at 8/05/2010 08:40:00 AM No comments:

Among the new shows announced by SyFy...
Sherwood. In this "Robin Hood" story for the 23rd century, a young man of privilege teams up with a misfit spaceship crew to right the wrongs of his family.
Like this...?

It's an animated series from 1967 called Rocket Robin Hood

, done by the many of the same creative personnel who did the first Spider-Man cartoon 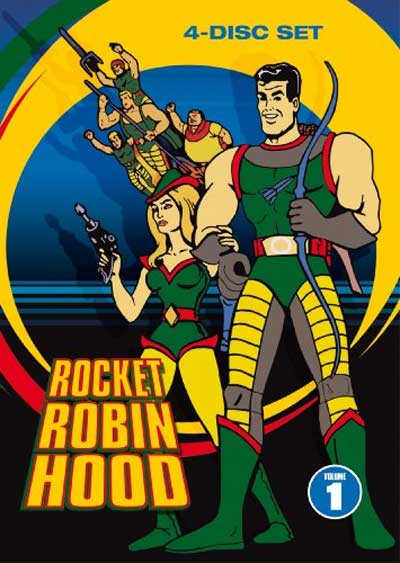 The Canadian-produced series had limited distribution on US tv, but VHS and DVD releases have given it new life among both animation and Robin Hood aficionados!
Considering the "creators" Damian Kindler, Martin Wood, and Amanda Tapping of SyFy's new Sherwood are all Canadian (and, no doubt, saw RRR as kids), one can only hope they make their futuristic "re-imagining" of the Robin Hood legend different from the previous  futuristic re-imagining!
We'll see...

From the promo material...
"A new series of Golden Age reprints featuring the classic adventures of the original Green Hornet!
Each issue in this new series of classic Hornet material is 40 big pages!
Dynamite has commissioned Joe Rubenstein to create brand-new covers, inspired by the golden Age comics of yesteryear!"
Compare the new cover above with it's 1940 "inspiration" below. 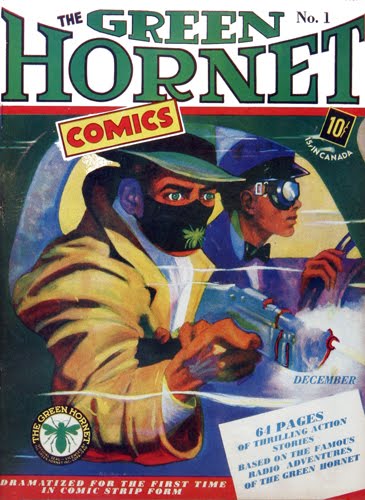 Personally, I'm less than enthralled with the new art.
As much as I LOVE Joe Rubinstein's absolutely-amazing inking, I've never been a fan of his pencilling.
If I was the art director, I'd have him...
1) eliminate the "earmuffs".
2) fix the perspective on the fedora.
3) re-detail the gun to match the modified Mauser on the original.
4) add the scarf.
5) modify the Hornet insignia on the mask to curve it around the head.
I'd also eliminate the upper-corner box art (which has the wrong time-period Hornet in it, and enlarge the logo closer to the dimensions of the original.
But then, I'd have used the original cover, since it's so darn kool we made it the centerpiece of our Classic Green Hornet collectibles line!
I do suggest you pick up the title, since it's the only print version of the Golden Age material currently available at a reasonable price.
But it will be available, along with the other issues of the run, in a combined book edition you can pre-order here

in time for Christmas (and then put under the tree with one or more of our Classic Green Hornet collectibles in a perfect holiday gift set for the Green Hornet fan in your life!

I Sell the Dead 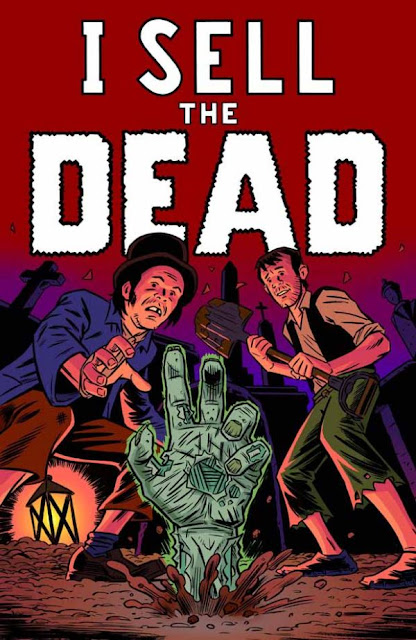 -style graphics!
Mix with a cast filled with experienced genre performers who are obviously enjoying the project!
What do you have?
I Sell the Dead

!
I came across it yesterday afternoon on cable, and let me tell you, I haven't had an unexpectedly-good time like this in years.
I was expecting SyFy Saturday Night-level crap, good for a laugh and little else.
Instead, I was treated to a well-written, well-produced, well-acted horror flick, the likes of which I haven't seen in (literally) decades!
The last horror anthology worth a second viewing was 1982's CreepShow

!
But, this pic, featuring Dominic Monaghan (Lord of the Rings

), along with lesser-known, but no less talented, thespians, is an absolute blast!
While it's a "period piece", it's not historically or geographically-accurate. (But then, neither were Hercules

, and nobody I know complained...)
What's it about?
About 85 minutes. ;-)
It's also about grave-robbing, zombies/ghouls, vampires, extraterrestrials, insane inbred families, sea monsters, corrupt businessmen, and hot homicidal women.
It's also extremely funny. Not the laugh-at-how-bad-it-is funny of Plan 9 from Outer Space

, but witty puns, quips and tasteless jokes!
And, there's even a comic book version

A companion piece to yesterday's post of the Kato: Origins #6 cover.
An alternate cover preview for issue #7 of the best of the various new Green Hornet series now on the stands by artist and interior colorist Francesco Francavilla.
A treat for Golden Age and Film Noir fans alike!
Posted by Britt Reid at 8/01/2010 06:02:00 PM No comments: