We give NEW meaning to "Back to School" 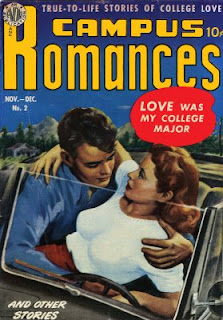 Well, summer's almost over.
Soon it'll be time to go back to...dare I say it...SCHOOL!
But, Atomic Kommie Comics™ always tries to look on the bright side and think to myself, "It's time to buy new clothes and school supplies!"
And, luckily, we can provide just what you need, including messenger bags/schoolbags, mousepads, magnets, mugs, notebooks/sketchpads, and, of course, casual clothing, all with an appropriate theme...Romance in school!
Just direct your browser to School of Love™ and see what I'm talking about! Several vintage classic comic book covers from the Campus Romances & Campus Loves series that will give your personal gear a kool retro look!
And remember, almost all of our digitally-restored & remastered designs are EXCLUSIVE to us! You can't buy them in stores!
(And if you're looking for something a little sleazier, have a look at Seduction of the Innocent™, our section of stuff your grandparents didn't want your parents seeing when they were your age!
Posted by Britt Reid at 8/20/2008 10:13:00 PM No comments:

Email ThisBlogThis!Share to TwitterShare to FacebookShare to Pinterest
Labels: back to school, comic books, covers, romance 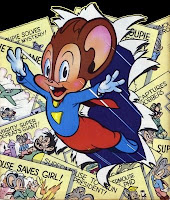 Admittedly, when you think of Atomic Kommie Comics™, you don't usually think of funny animals.
Well, it's time you did...
We're reintroducing two long-lost superheroes from the 1940s. We've done that before in our Lost Heroes of the Golden Age of Comics™ line.
This time, the rub is...they're funny animals, and they're for kids only!
Cosmo Cat, like many other superheroes, was created by an accident that would kill most normal people (or animals). In his case it was dropping a bomb on his foot. The fact that he was standing in an atomic power plant at the time might have had something to do with his survival. Scientific accuracy was not one of the strong points of Golden Age stories...
After gaining the usual super-powers of invulnerability (which all animated animal characters have to an extent, Ask Wile E. Coyote!) super-strength, and flight, he renewed his powers by taking Cosmic Catnip Capsules! Despite having the power of flight, he rode in a cat-rocket when traveling from his base on the Moon to battle crime on Earth.
He was one of the last of a wave of 1940s super-animals including Super Rabbit (ironically from Timely/Marvel) and Hoppy the Marvel Bunny, the animal surrogate of the Golden Age Captain Marvel.
We're also offering the FIRST of that wave...Super Mouse (although we're calling him "SuperDuper Mouse" to avoid wrath of the owners of the Big Man in Blue! (and, no, Super Mouse was not a DC character!)
Super Mouse also took a controlled substance to maintain his powers, in his case cheese produced from the milk of a "super-cow"! (We won't dwell on the implications of chemical/radiation-enhanced animals, at least not while chewing on our genetically-manipulated cheeseburger...)
At any rate, we're offering several images of each furry hero...
CosmoCat 1, CosmoCat 2, CosmoCat 3, CosmoCat 4, SuperDuper Mouse 1, & SuperDuper Mouse 2
Please note: while we offer the usual assortment of mugs, mousepads and other tchochkies, the clothing is infant, toddler, and kid sizes only!
Posted by Britt Reid at 8/17/2008 01:49:00 AM No comments: